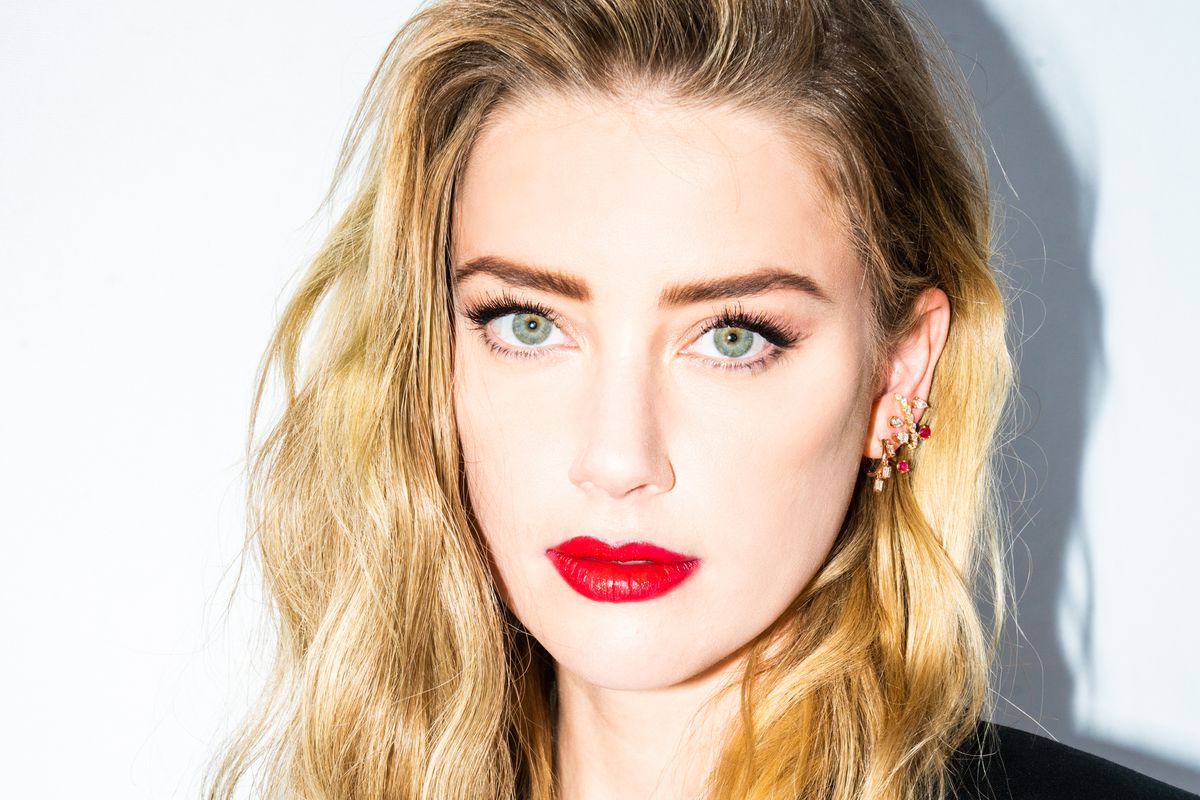 Catching up with the actress and activist at TIFF.

Noah Lehava
Renée Rodenkirchen
Let’s set the scene, shall we? It’s day one of the Toronto International Film Festival. We’re in a massive makeup-filled glass box plopped right in the heart of the festival—it’s L’Oréal Paris’ Beauty Suite overlooking the red carpet, which is about to be the stomping ground for Hollywood’s biggest names. Amber Heard, the beauty house’s newest face, is dabbing on a final swoosh of red lipstick—the only splash of color to complement her monochrome pin-thin-tailored Saint Laurent suit. “I was whisked away straight to Cannes,” Heard gushes of the time she found out she was officially a L’Oréal Paris spokesperson earlier this year. “What a way to be introduced into the brand.” It sure is.

“The brand always represented the things that are very much in line with my own beliefs; activism on behalf of women, women’s rights, and the empowerment for women,” Heard continues. She’s in town not only to promote her film, Her Smell, but to speak at the brand’s #WorthIt show, which gives a voice to women in the film industry. Ahead of her appearance, we sat down to chat about her own challenges of being a woman in the film industry, why the people around her are her secret weapons for any big appearance, and the best beauty trick she learned from the Aquaman set.

What do you think about gender equality in the film industry right now?

Have you experienced your own challenges?

“Well, I am a woman, and I’ve been a woman in this industry since I was very young. From the very beginning, I noticed it. I’ve been speaking up on the disparity of pay and wages, and representation and access of women, since I was 17 years old. I find it sad, yet at the same time, inspiring that 17 years later I’m saying the same thing. In my life, I’ve experienced many different forms of discrimination and general unfairness, from pay to my personal life.”

How do you psych yourself up for a big appearance?

“You can’t always be in the best mood when you’re about to walk down a red carpet. The most important part in preparation is taking care of what’s on the inside; the heart drives everything. What’s on the inside is what’s [projected] in a room, on a carpet, in a photograph.”

“It depends where I am in my life. It’s important to surround yourself with love. I have an amazing glam squad—I have worked really hard to curate and cultivate the right kind of people,  not just because they’re extremely talented, but because they bring something to the room. The time that I spend getting ready is important because I need to be at my best and I can’t do that when I’m working around people that bring chaos or negativity, or who I don’t find love and humor with.”

What’s the last thing you do before you step out of the car and onto a red carpet?

“I put on some amazing music very loud. I’ll put on some Otis Redding or Marvin Gaye, or the Doobie Brothers, or Lil Wayne—whatever I’m into at that time, I blast it.”

What do you always carry in your bag?

How many do you think you have a day?

“At least a pack a day. They’re just so refreshing!”

What’s the one makeup move that makes the biggest difference on your face?

Do you have beauty rituals that you always think, thank god nobody can see me do this?

“Ooh, yes! I’m obsessed with those sheet masks. I like to change them up, so there isn’t a specific one that I use. You look like a mummy if it’s the white one, but some of them are charcoal, green, gold, silver. Sometimes I’m in a hotel room, which is when I tend to need more moisture on my face; I’ll do a moisturizing mask, and when room service comes with my coffee, I’ll open the door, forgetting that I have a silver face on, and I always love seeing the room service person jump back for a second.”

Is there a beauty look that you can never master yourself and leave to the pros?

“Yes, but out of sheer necessity, not because I want to be. [Laughs] If I could get pageant hair every day, I would.”

Have you learned any beauty tips from set?

On Aquaman I learned a lot of waterproof tips for obvious reasons. How to waterproof my entire face from mascara to the foundation—the setting sprays that were waterproof, waterproof mascara, lipstick.”

If you could have a superpower, what would it be?

“To pick all of the superpowers that I wanted.”

Last thing you ordered on Amazon?

“I would buy Listerine strips, fake eyelashes, and a L’Oréal lipstick, the Rouge Signature.”

The last thing you Googled?

Want more stories like this?
French Actress Pom Klementieff Channels Twiggy For Chanel and Variety's 'Women in Film' Dinner
What Happened When I Stopped Heat-Styling My Hair
When Beyoncé's Colorist Speaks, We Listen