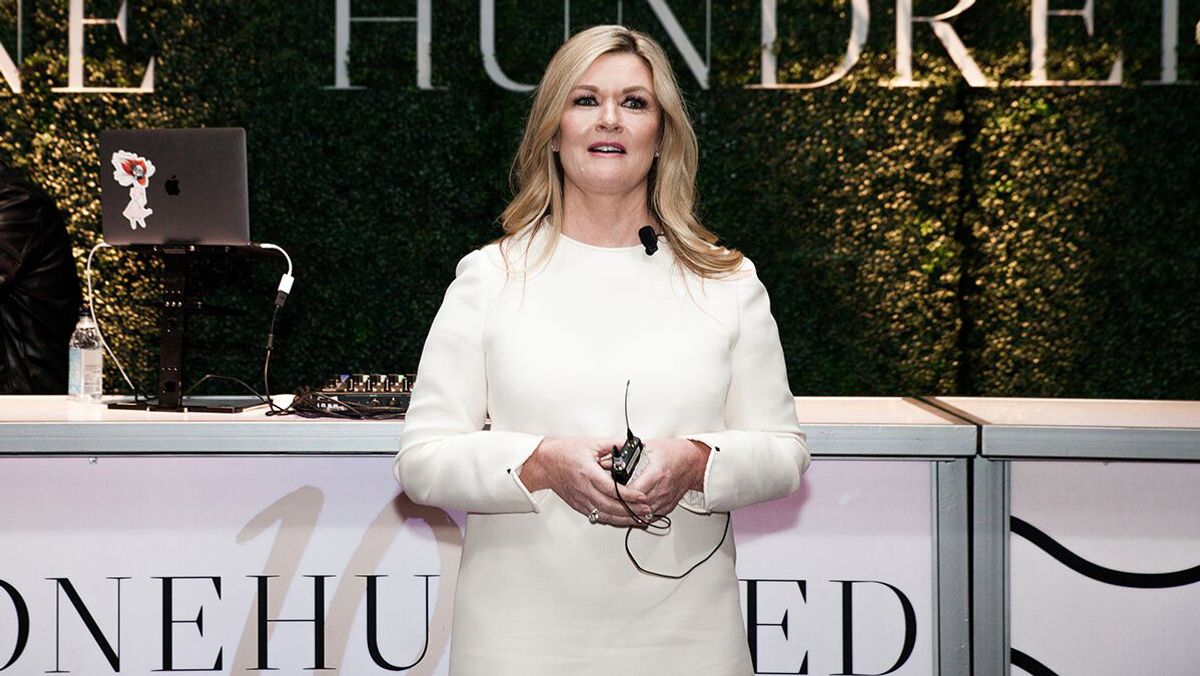 Pamela Fletcher is changing the face of the auto world.

Pamela Fletcher wants young women to know that her job isn’t “un-glamourous,” and judging by the setting she says this in—the lounge at The London West Hollywood, sitting on a plush couch before a spread of afternoon tea—one would not argue with her. While it’s true that as vice president of Global Electric Vehicle Programs for General Motors her day-to-day usually doesn’t include fancy hotels and tea breaks (more likely customer surveys and part testing), it’s also true that she can describe her job like this: “I can point outside to the parking lot or the street and say, ‘I make that,’” she says. And her adeptness at making “that”—cars that millions of people rely on—has led to a myriad of promotions and professional accolades, the most recent being a spot on Create & Cultivate’s annual list of 100 inspiring, trailblazing women. See? Glamorous!

We jetted off to L.A. for the event celebrating the honorees—among them Emma Grede, Yvonne Orji, and Eva Chen—and chatted with Fletcher beforehand. Here, she talks about her lifelong passion for cars, the future of the automotive industry, and how to ace an interview.

What initially sparked your interest in cars?

“My dad had all these boy hobbies, and he raced cars. He brought me along whenever he needed an extra set of hands, and I became hooked on it because it’s kind of cool, right? You go to the racetrack, and there are all these fast cars; they’re loud, and there’s all of this adrenaline and excitement. So I became addicted to cars, but what I really liked—which is important to note—is that I learned how things worked. I felt like I knew more about something than the other kids at school [laughs], and that, frankly, is what motivated me to want to become an engineer.”

When I was in high school, I took auto tech, and I found it so confusing that I just threw my hands up. I can say with confidence that the automotive industry isn’t for me, but I do think people can be great at things that they initially find daunting. What’s your advice for young women who think engineering is too intimidating?

“Well, one, they need to be honest. I think that sometimes girls say that because it’s the thing to say—that science isn’t cool—but that couldn’t be farther from the truth. In my perfect world, [young women] have exposure to STEM, and they get to see what it’s all about and make an informed choice. There are so many possibilities. If you’re into makeup, that’s all about chemistry. And in your job, you don’t have to write everything by hand because you have a phone that can record this conversation. Science drives everything we do. To your point, it’s not for everybody, but it can be extremely rewarding.”

If someone met you and had no idea what you did, how would describe your job?

“I can point outside to the parking lot or the street and say, ‘I make that.’ The process to do that is giant. It starts with all this consumer research—talking to people and doing studies to learn their preferences—and then we take that and start to figure out, ‘OK, so [this car] probably needs to be about this big and look like this.’ Then we engage with these super-creative people; we have the best design staff ever. They say what the car is going to look like on the inside and the outside, and then I go to the engineering team. We all have what I call this healthy debate, because sometimes the engineers see what the designers want a car to look like and say, ‘Well, you have to put a computer behind that part to make it run, and you didn’t give us any space to put a computer there.’ After we get through that, we do all of this testing to make sure all the parts perform like they’re supposed to, and then we work with the manufacturing team. They may say, ‘How are we going to build that? You didn’t give us any room to get our hands in there to put this thing together, or for the robot to get in there and weld these two parts together.’ So it goes through these stages that vary widely, but in the end, out pops a car [laughs].”

Can you talk a little bit about the self-driving technology you’re working on and advocating?

“So many people say, ‘Oh my god, I don’t know that I’d ever want to get into a self-driving car.’ But go look at the data, and it says we humans aren’t such great drivers. Just in the U.S. alone, there are about 35,000 fatalities each year, and 94 percent of those are caused by human error. We can get a whole lot safer and a whole lot better, and I think we can do it by self-driving technology.”

Who are some other women in the industry who you admire?

“Our CEO [Mary T. Barra]. I truly think she’s terrific. Every time I’m around her and she says something or does something, I feel so inadequate [laughs]. I’m like, ‘Why didn’t I think of that!’ Her delivery is always perfect, and it’s sincere. The woman in charge of all our manufacturing [Alicia Boler Davis], is a big deal at GM. We’re a global company, and manufacturing is our largest workforce; she’s a lady; she’s an African-American lady. She [was] just named Black Engineer of the Year. She’s fantastic, and I could keep going down the list.”

When you’re interviewing someone to join your team, what do you look for?

“This sounds really simple, but I can’t tell you how many times I’ll be interviewing somebody for a job, and they never come out and say, ‘I want this job.’ It’s so simple, but I walk away thinking, ‘Do they want it? Are they interested? Did somebody just tell them to interview?’ I mentor a lot of people, and I tell them, ‘If you want a job, make sure you tell the person interviewing you that you want it [laughs]!’”

What are you most proud of having accomplished in your career?

“I have a lot of things I’m proud of, but I feel like, number one, I’m doing what I love. I never thought about where was I gonna go with it; I never thought I would be sitting in this seat today. But as I look from the chair I’m in now, another thing I’m proud of is I feel like in my area we are truly developing the leaders of the future—the leaders of the future of the automotive industry and the whole mobility industry, and I’m super proud of that. The advances we’re working on are going to increase the world’s mobility and the ability of people to get from one place to another, which some of us take for granted.”

14 Successful Women on the Age They Found the Hardest
When Common and Kanye West Want to Throw a Party, They Call These Sisters
18 Things to Buy Right Now to Support Women’s Causes