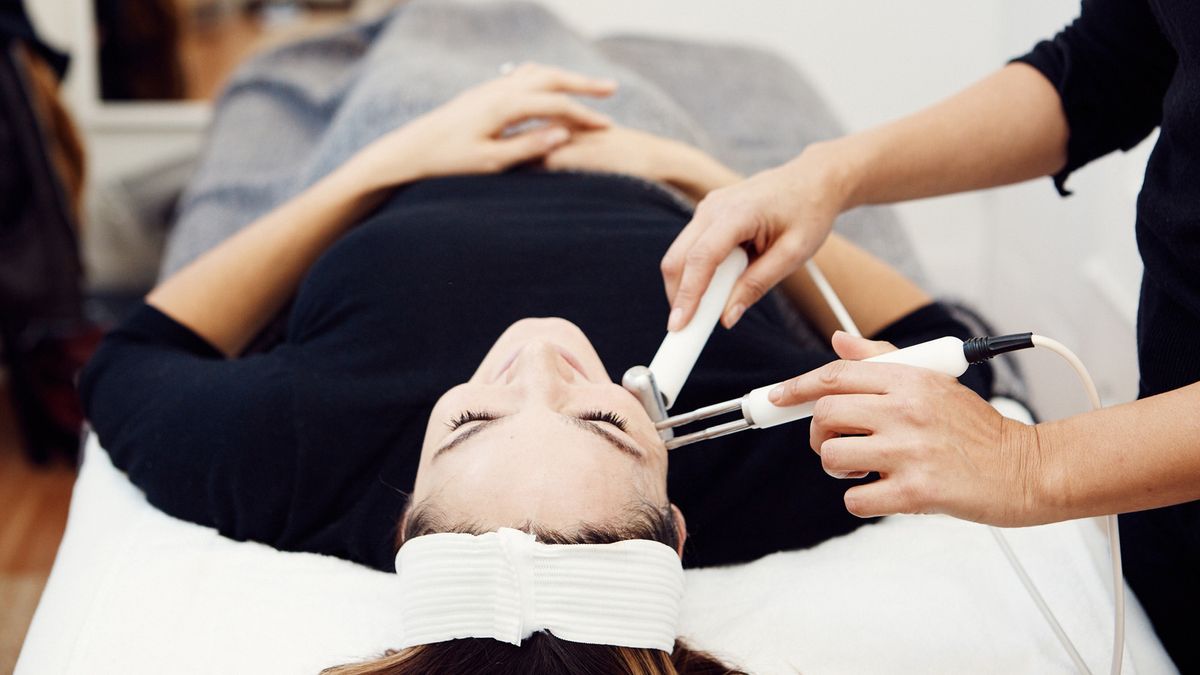 I became obsessed with skin care in my late 20s. I chugged water, slathered on eye cream, and avoided the sun like Tinder after midnight. But no matter how much I did or spent, I couldn’t undo the existing damage from earlier, less responsible days.

That’s when I started to dream: What if there were a magical treatment that could reset my skin to its former baby self? To the face I had before zit popping (hello, discoloration) and tanning beds (I’ve since recovered) became part of my day-to-day life. And before birth-control-induced melasma conquered the area around my mouth.

That’s when I saw Chelsea Handler post before-and-after photos from laser resurfacing, a treatment in which pulsated light tricks your skin into thinking it’s experienced a third-degree sunburn. The damaged layers peel off, leaving you as close to “zero” as possible without a more in-depth procedure.

“Sun damage in particular is the hardest thing to reverse,” explained friend and celebrity aesthetician Shani Darden. “Or if you have acne scarring and have tried topical remedies with no results, then I would consider exploring laser treatment.”

Darden said the most important thing is to find a doctor who is super experienced with lasers. Enter Dr. Simon Ourian in Beverly Hills, who, beloved by the Kardashians, is pretty much the leading game in town.

“Dr. Ourian is my favourite doctor for anything laser,” wrote Kim Kardashian. “[His treatments] are super cutting-edge, and I love [them] as preventative measures to deal with aging before it happens, like dark spots, fine lines, and wrinkles.”

OK, sold. I called Ourian’s clinic, Epione, and asked why I should trust his laser-wielding hands—aside from this major fan girl post from Channing Tatum’s wife, Jenna Dewan, who recently underwent the procedure. “I realized several years ago that most of the lasers available were either too strong, which requires a very long recovery time, or weren’t effective enough,” he explained. “So I decided to make my own.”

Dr. Ourian contacted the world’s leading laser manufacturer and requested custom settings, creating a laser that won’t pigment dark skin (the most common side effect) and gets patients back into public in a week or less. It’s called the CoolLaser.

“It’s a dual-mode, high-definition, fractionated CO2 laser,” Ourian explained further. “And it’s different in that it cools the skin while simultaneously emitting microscopically thin columns of laser… It’s the middle ground between having a treatment that’s effective enough, while still promising minimal downtime.”

I made the appointment.

Dr. Ourian told me to avoid Advil and other blood thinners a few days prior, which can slow the recovery process. I wore loose-fitting clothes, a super cool (not) headband, and absolutely no makeup. After a quick debriefing, Dr. Ourian and his team started with a numbing cream over all the areas of my face that would be treated. (Basically everything, except for the skin immediately beneath my eyes.) They also offered a small amount of laughing gas, which, although not necessary, did make the experience far more pleasant.

The pain is best compared to someone snapping a rubber band on your skin. It isn’t great, but doesn’t feel worse than a tattoo or laser hair removal. And the fact that the entire procedure takes less than 15 minutes makes it all more bearable. I left about an hour after I’d arrived—red and swollen, but totally capable of driving home.

Now, I can’t emphasize this enough: Don’t make plans for at least a week after the treatment, because that initial redness is just the beginning. I woke up the next morning looking like a tomato-colored alien whose face had fallen into a waffle iron, with small dots strewn across my face. And since you can’t wear makeup or sunscreen for seven days, there was nothing I could do to hide it (other than cowering beneath wide-brimmed hats and sunglasses). It wasn’t until a week later that the dots darkened and my skin started to peel. At that point, I did my best to cover the side effects with makeup, but it pretty much peeled off within an hour. It looked like the worst, weirdest sunburn of my life.

Ten days after the treatment, I began to wonder whether the whole thing had been worth it. I still refused to leave the house, although I’m admittedly vain about these things. Then one day, about two weeks after my visit to Dr. Ourian’s office, I woke up and my skin was literally perfect. My freckles were faded, my melasma was gone, and it looked as if I had a perpetual Instagram filter applied. The fine lines around my mouth were the only thing that looked the same, but overall my face was vastly improved. It’s now been six weeks since my procedure, and I haven’t applied foundation once. I get constant compliments on my skin.

So would I recommend it? The answer is absolutely yes—but only if you really need it. I don’t know whether my skin issues at this age were drastic enough to warrant the cost or the recovery time. And that’s because it’s really expensive. Even if you can accept two weeks of hermit-dom, a laser resurfacing treatment from Dr. Ourian can cost upwards of $6,000. (The average across the country is well over $1,000.) But I’ll definitely seek it again in my 30s or 40s.

“But a good, quality laser treatment is expensive,” asserted Lisa Hartman, who runs Soignez-Vous Aesthetics in New York City. “And if it’s not, something’s probably not quite right. The price of a good, quality device…[is] upwards of $200k, not to mention continual costs for applicators, insurances, and maintenance of the device itself. You get what you pay for.”

If you have serious issues, like acne scarring, then by all means—get the laser resurfacing. But if not, I suggest waiting until a bit later in life.