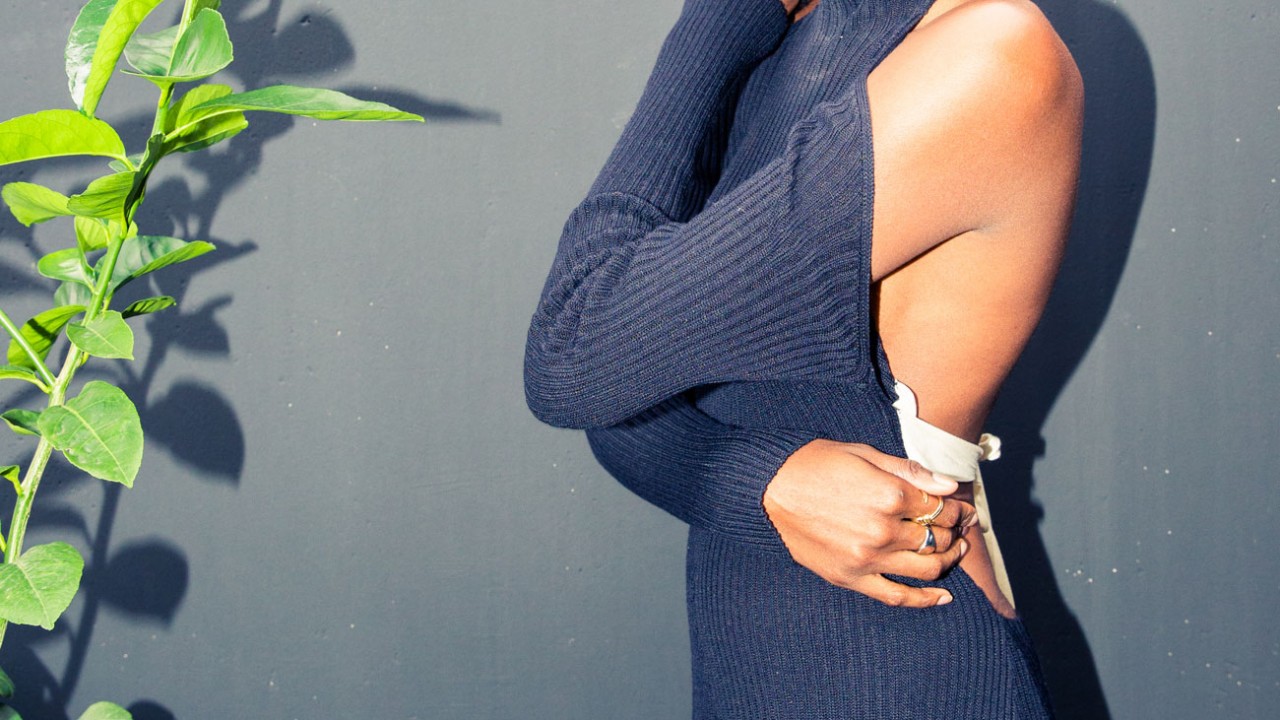 She’s been called a “vagina-practor,” but it’s a lot more than that.

“People are realizing that they’re unhappy about how we’re doing sex,” says Kimberly Anne Johnson, a certified sexological bodyworker based in Southern California. Acknowledging the sexual recalibration happening in this post-Pussygate, -Weinstein, and even -Aziz Ansari moment, she says, “Most of us have sexual trauma.”

The question is how do we heal as a society and as individuals? “People have a lot of practice at talk therapy, but they [don’t get] the full picture,” says Johnson, who works with pre- and postpartum women (she recently published the book The Fourth Trimester), people recovering from sexual assault and trauma, and people merely looking to have better sex. She practices out of Los Angeles’s female-empowered WMN Space in Culver City and a private residence in Marina Del Rey. For the past eight years, she has been helping clients heal through her synthesis of therapy, physical therapy (she started her career as a trained Rolfer), and gynecology. And lately she’s found that with every Nassar, Lauer, and, even Ansari put to the flame, women and men are remembering and recounting their experiences of unwarranted gropes, kisses, comments, or worse that they had shamed into silence or were socialized to believe were unworthy of reporting. The backlash has incited so many uncomfortable conversations that it has been satirized on Saturday Night Live. But it is also leading to a much-needed moment of self-reflection from men about their sexual behavior and whether or not what they’re doing is desired, and from women about their lack of voice in their own sexual experiences.

“True consent is when the body and mind are synced up about what they want and what’s happening, or what they don’t want,” says Johnson, who works within a framework she refers to as the four domains—biomechanics, biochemistry, trauma and emotions, and scar tissue—to help people tap into more satisfying and honest sexual energy. “[My method] is a re-wilding process to get back to our essential natures.” Her method uses somatic healing—a form of body-centered touch and movement therapy—to rewire fight-or-flight responses to touch or movement associated with trauma. Then, when her clients’ minds recognize a safe and respectful sexual encounter, their bodies do, too. This can involve extremely patient and sensitive work with the pelvis—work that has earned her the nickname of LA’s “Vaginapractor.” She might help a client with vaginismus to release tightness through massage, or internally work to heal back pain or uneven tissue caused by a birth. She might educate a client on areas of the vagina from the cervix to the clitoris to help her better understand what might feel good sexually.

Sometimes Johnson’s work involves subtle exercises meant to deconstruct the conditioned thinking that allows people to passively participate in dissatisfying or dehumanizing sexual encounters. For example, after a long conversation about what was vexing this writer on one particular afternoon, she began to notice a pattern in my speech of expressing one thing, but allowing the opposite thing to happen. Instead of telling me I had problems with boundaries, she showed me by suggesting we stand on the opposite sides of the room. First, she asked me to stretch and get comfortable in my own space, then to claim where that space began and ended for me. When I was ready, I was to ask her to walk toward me, then ask her to stop when I felt my energy shift toward discomfort. I asked her to walk forward, and as she took a few slow, small steps, I began to tighten my mouth into a smile. “Ask me to stop,” she said. “It’s OK,” I said, laughing. “I can tell you’re uncomfortable,” she said. She was right. “OK, stop,” I said, and again, laughed. This repeated a few more times. “Why are you laughing?” she asked. “I feel bad asking you to stop,” I said, only then realizing as I said it the lunacy in feeling responsible for comforting another person for causing my discomfort.

Within a few moments she unmasked the faulty and deep-seated logic that I had employed for much of life: the time I laughed when my cab driver in Paris asked me if I wanted to go somewhere before he took me home to my boyfriend when I really wanted to jump out of the car at the nearest light. Or the time I joked with a man in a local restaurant who told me he wanted to see what I had behind the zipper on my pants when I really wanted to gouge his eyes out. It explained why, after realizing that a new sexual partner had removed his condom mid-sex hoping I wouldn’t notice, I didn’t walk out and never speak to him again, but instead slept over, hoping that, by making him feel better about his utter disregard for the safety of my body, I might feel better, too. And, I might be projecting, but it could be why now-famous “Grace” from the babe story went down on Ansari even after she attempted to tell him—timidly and sarcastically—that she wanted the sexual portion of their night to be over.

In All About Love: New Visions, bell hooks writes, “Sexist socialization teaches females that self-assertiveness is a threat to femininity…. The fear of being self-assertive usually surfaces in women who have been trained to be good girls or dutiful daughters.” Meanwhile, she says, men have learned that masculinity requires occasionally breaking the rules to take what’s theirs; that lying and manipulation are “socially acceptable form[s] of coercion.” For every “Grace” unable to say what she wants, there’s a Gabriel García Márquez, who wrote the Nobel Prize-winning Love in the Time of Cholera, largely regarded as one of the most romantic novels ever written, with such indoctrinating lines as “…once a woman goes to bed with a man, she will continue to go to bed with him whenever he desires…” and “…when a woman says no, she is waiting to be urged before making her final decision.” It wasn’t so long ago that the premise of most romantic comedies was our hero sticking around long enough for our heroine to give in to having sex with him. “All of our education about sex is from a male perspective,” says Johnson. “What does female-empowered sex look like? We don’t even know.” But she and her clients have begun to explore it.

For one, female-driven sexuality requires tuning in to our bodies and our thoughts. It is much slower, says Johnson, it always involves foreplay (“a misnomer—every woman needs foreplay, that’s how female arousal works; it’s not a precursor.”) It involves open communication and occasional pausing. “We have this idea that once consent starts or once arousal starts, we have to follow it to the end. Or that it would ruin the moment if you communicated—that you should be so into it that you stop talking. Talking during sex is a rewiring for people. Pausing is a powerful tool [of assessment].” And we’d probably all be having more satisfying sex if we admitted that we weren’t emotionally ambivalent. In this post-Sex and the City generation, having more unattached sex with more partners may feel like the upper hand, but is it actually giving us what we want? It’s extremely difficult to not put much skin in the game when all of your skin is in it. Johnson suggests that less may be more. “Most people don’t regret not having gone further with a partner.”

Better sex is a marker of better equality. And, says Johnson, “If you really want great sex, it’s slowing down, letting go of the markers of your identity, owning what you think is imperfect about yourself, and letting a life force move through you which is unpredictable.” In other words, great sex requires being in the moment, honesty, and self-respect. And that just might help us heal.