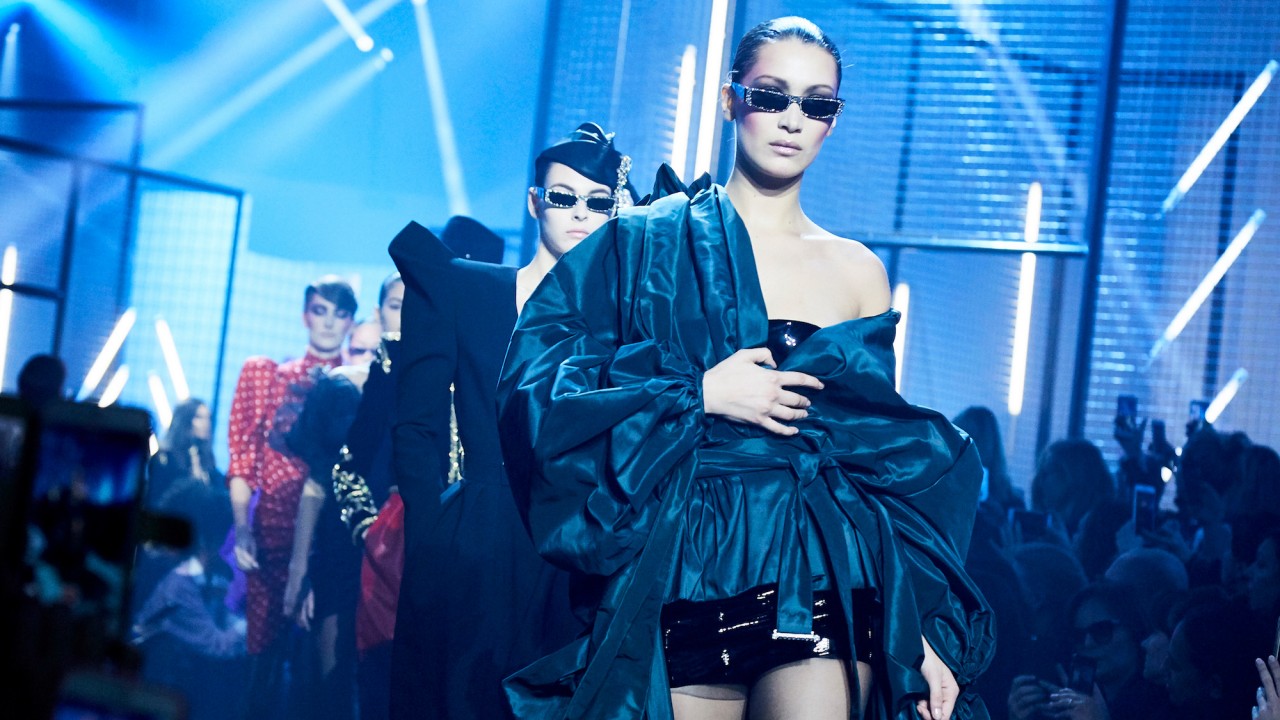 The ’80s Are Officially the Decade That Will Never Die

At least not if Alexandre Vauthier and Bella Hadid have their way.

Being invited to an Alexandre Vauthier couture show is like winning the golden ticket to party with the cool kids. The music is great, clothes are flawless, and everyone around you is beautiful. We’re looking at you, Bella Hadid.

For this season’s spring 2018 couture collection, Vauthier took the party back to the nightclubs of the early ’80s, when the New Romantics movement ruled London.

“It was all big volumes and geometric shapes, but also super poetic,” Vauthier said of that period.

He drew heavily from the 1983 movie The Hunger, starring Catherine Deneuve and David Bowie as vampires. Shoulders were strong and exaggerated, while ruffled shirts, a trademark of the era, were blown into supersized proportions and paired with sequined drainpipe skinnies.

Makeup artist Lisa Butler was heavy-handed with the magenta blush, accentuating the cheekbones and the side of the forehead. Eyes were dark and featured a strong bottom liner, while lips were a glossy pink.

This season saw the debut of Vaultier’s collaboration with iconic French eyewear brand Alain Mikli on four styles of sunglasses (with Kate Moss fronting the campaign!). While the brand has collaborated with various fashion brands including Jeremy Scott, this is its first couture show.

Click through for all the behind-the-scenes photos with models like Bella Hadid, and see how the show came together.

“We kind of called it ‘modern retro twist,’ and it was really hard, sharp, shiny chignons, but we did some sort of side-swept twists that were very masculine and inspired by Catherine Deneuve and David Bowie in the movie The Hunger,” explained lead hairstylist Sam McKnight.

“We had four girls with really specific, very sharp, well-done chignons as a nod to The Hunger. We had some girls with natural hair too, so it was a mixture of the nightclubs of the ’80s,” said McKnight.

“Alain Mikli was a very big brand in the ’80s and ’90s, but then became quieter. Last year we started repositioning the brand in preparation for the re-launch from an image perspective, and this is our first couture show, and it’s a huge moment for us because we love Alex’s work,” said Alain Mikli’s creative director, Giampiero Tagliaferri.

“The fabrics are always super nice. There is some alligator, velvet, and a lot of fur. There’s also silk, leather, and python,” Vauthier explained.

“I traveled back to London and decided on the collaboration. The London culture called me, like ‘London Calling,’” the designer said of the collection.