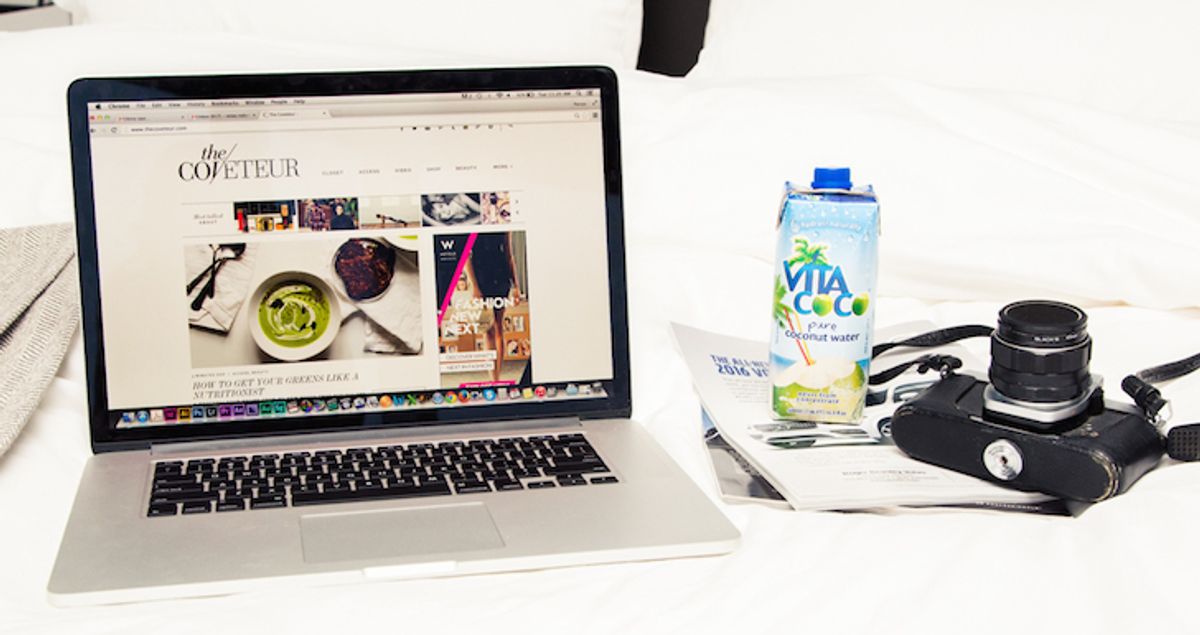 What I Wish I Knew Before Going Freelance

I found all the answers on a getaway to Jamaica.

Nestled in a thatched-roof villa in Negril, Jamaica, I faced a stretch of the Caribbean Sea. I was submerged fully in a bath brewing with turmeric, orange, and other alchemical remedies, my body practically stewing in a shallow tub. Paralyzing knots, strains, and toxins had just been kneaded out of my body by a pint-sized masseuse with overwhelming dexterity; stress I had been carrying for months, probably years, had seemingly been released in two hours. I could hear the low hum of big tunes and waves crashing outside, and spot small boats passing by—all small signs of human life—but I felt closer to the edge of earth than I ever imagined.

Home—Brooklyn, New York—was miles away from my secluded spa sanctuary here at Rockhouse Hotel, and I was on the first true vacation I had had in 2 years. Oh sure, I had traveled within that time. Very far-flung locales, too. Amsterdam...Lagos, Nigeria...Marfa, Texas.... But it was all for work and I was on deadline each time, chasing stories across continents and time zones, while hurriedly trying to soak in culture. I was racking up plenty of air miles and experiences, but little time had been dedicated to rest and recharging. I had somehow convinced myself that the idea of being “selfish” and indulging in “me time” seemed anathema to career and success, so I put it off. Even after I left my job as senior fashion writer at Vogue in the spring to go freelance, I didn’t miss a beat, launching fully into a new career as a creative consultant within weeks.

It was best to keep moving, to keep grinding, I told myself for months. But as I sunk deeper into this ocean-front basin, I realized how long overdue this getaway was. There was so much to reflect on, namely the radical shift my life and career had taken in just six short months, and all the lessons I had learned since going freelance. Over the course of my four-day stay here in paradise, they all came rushing forward. While swimming in a cave just below my bungalow where I was staying with my dear friend Chelsea Zalopany, I reflected on facing my fears. That’s all freelance life is, I thought, as I waded deeper into the sea. Attacking emails over a fresh stack of banana pancakes at breakfast, I realized that I’m still a worker bee, despite being able to work from anywhere. Late-night on our bungalow patio, Chelsea and I talked dreams and ideas over what seemed like endless glasses of wine and rum punch, only to wake up the next morning to tan and plot more. Like our view, my perspective was clear and wide, and I was finally able to see things for what they were.

Know your worth and “get the bag”:

Do yourself a favor and read Gucci Mane’s tweets each morning. The Atlanta rapper and shrewd businessman is something of a self-help guru, using his 140 characters as an opportunity to offer pithy but enlightening pieces of advice on success and prosperity. Chiefly, his ideological framework is that of a hustler, with his main pursuit being that of “getting the bag.” Which is to say, always confirm compensation. In the freelance world, being about your “paper” is perhaps paramount, so get over any weird stigmas with talking openly and honestly about money. You’re insulting no one but yourself when you aren’t upfront about monies. So, first, have a long, hard conversation with yourself about your market value and determine your worth. Think about your unique skills and experiences, and all that yields. Then once you’ve determined this round number, you can ask for even more. When negotiating, have your base rate and then include a clause regarding an “onboarding fee” (most likely 50 percent of your rate) and a “kill rate,” should the project fall through before completion. Now, there are times when I will do a small project below my usual rate, because I’ll either have a special relationship with the client or there is some type of barter. But make that the exception, not the rule. Secondly, get real about getting paid on time. When people get funny about my money, I have no problem hounding them. It’s kind of your job now. Quite honestly, I think the more annoying you become, the faster you’ll get paid. So get annoying.

I think the largest misconception about freelancers is that we have a problem with authority. I don’t buy into that. I think we just enjoy having authority. And when you venture out on your own, you come into so much of it. You quickly become your own CEO, HR director, secretary, and office manager, so act accordingly. You may no longer work under the suffocating omnipresence of a micromanager, but you do have to push yourself as if you are. Meeting deadlines, refusing to put things off, encouraging yourself after a success or a failure is mandatory. You have to dig deep and remain diligent, even on the days when you’re uninspired, tired, or quite frankly, being lazy. Which brings me to my next point…

Your time is your own, but keep consistent business hours:

I remember thinking I was going to have so much time as a freelancer to meet my besties for a long, luxurious lunch or slip into a movie in the middle of the day like a little delinquent. But the reality is, while my time is my own (and that’s an incredible privilege, mind you), I’m up at 9:00 AM, working through lunch, and not closing up shop until the job is done. That can mean stopping for dinner around 7:00 PM, and then picking back up around 10:00 or 11:00 PM. It differs, but I keep consistent hours. My clients know when they can reach me, and no email goes unanswered for more than a few hours. In that same breath, if you need to take a “half day,” allow yourself that much leeway. That balance is what will keep you sane.

Leave the house at least once a day:

Now, I may be squirreled away at my desk from 9:00 AM to who-knows-when, but I always make sure I leave the house at least once a day. You must be thinking, ‘What kind of damn recluse do I have to be if I have to remind myself of that?’ but I talk to so many freelancers who feel the same way. You just get so sucked into your environment that the idea of venturing out almost seems like a task. But put yourself to the task. And even if you have a studio space separate from your home that you work out of, seriously, leave. Take a walk around the block. Eat lunch out. Meet up with another freelancing friend for a work session. Anything that’s energizing. I usually work out around 11:00 AM or noon for an hour, run small errands around the neighborhood, or I plan dinners and drinks after work with friends. It helps break up my routine, and it forces me to put on actual clothes rather than running around in a sweatsuit all day. And more broadly, plan a getaway. As my trip to Jamaica taught me, you can afford to do so now. You can quite literally work from anywhere. Even the edge of the earth.

Although I am now much more confident about my decision to go freelance, it wasn’t always that way. In the spirit of transparency, I was an emotional roller coaster for months afterwards. I had days where I felt wise and brave for taking such a stunning risk, while on others I punished myself completely. I was sensitive to unsuspecting triggers that would send me spiraling into a cycle of nihilism. A delay on a project of any kind would set me off. Slights, both real or imagined, could have me bawling. Any setback was confirmation that my decision was wrong; anyone else’s success was an indication of my own failure; any hardship was, in my reasoning, self-inflicted. Then a beat later, I would get an email in my inbox that would quell my fears, and my spirits were restored. But this up-and-down emotional state wasn’t healthy, nor was it productive. So I began prioritizing my well-being, which, for me, meant surrounding myself with people who offered nothing but support for my big dreams and plans. My best friends allowed me to vent over wine; my mentor walked me off the ledge; my family cheered me on. I turned my phone off when social media destroyed my self-esteem; I read the work of women much stronger than I; I spoiled myself when it felt like “why the hell not?!” In 2018, therapy is on deck—obviously along with more bungalows and tropical getaways.