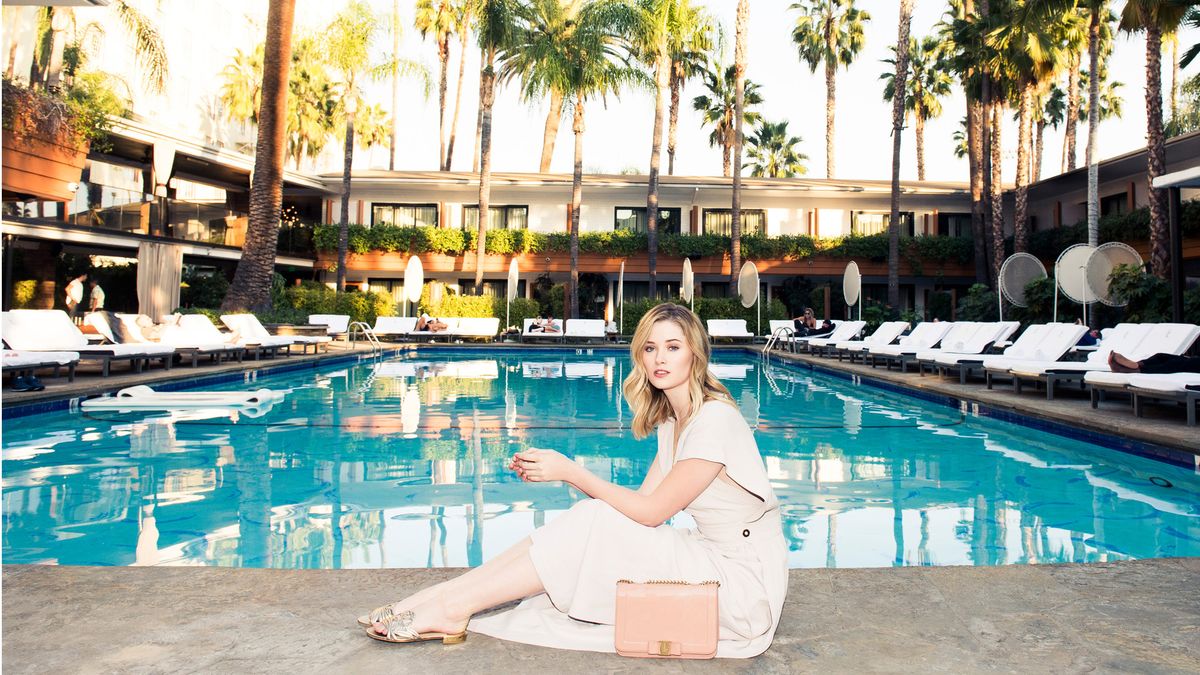 Virginia Gardner on channeling California icons, her genius tip for holiday shopping, and playing one of Marvel’s only LGBT characters. In collaboration with Ferragamo.

We can think of few more fitting spots for a poolside shoot with a Hollywood up-and-comer than the iconic Hollywood Roosevelt. And that’s exactly where we found ourselves with Virginia Gardner (and an entire rolling rack of Ferragamo to play dress-up in), who stars on Hulu’s The Runaways, the latest franchise hailing from the Marvel universe (she plays Karolina, one of its few LGBT characters).

After stopping by the Italian house’s Rodeo Drive flagship to pick up, ahem, a few things, we caught up with Virginia—she introduces herself as Ginny—at the hotel’s Rosy Oyster. The bivalve-centric bar, tucked just behind the Tropicana pool (the interior of which is home to a mural by artist David Hockney), is all millennial-pink accents, cheekily graffitied tables, and velvety ’70s-esque booths, making it the perfect spot to talk shop with Gardner. With an espresso in hand and an array of glossy Vara Rainbow bags at her side, she looked every bit the bright young thing, channeling another Ferragamo muse who once called the Roosevelt home (one Marilyn Monroe—the designer is behind the heels that gave MM her signature walk). Talk about full circle.

On finding her sense of style:

“I would describe my personal style as classic Americana, but with a twist. I love timeless staples, but I like to add in something fun, to give a contemporary twist. I love classic, easy, and elegant. I find myself a lot of the time in a pair of boyfriend jeans with a t-shirt and a leather jacket, but a red sneaker to add a pop of color—keep it young, but still cool.”

Why she looks to other women in Hollywood for style cues:

“I think Zoey Deutch has really beautiful style. She always looks really fashion-forward, but she knows how to keep it really accessible, too. It never feels like it’s so fashion-forward that a girl at home couldn’t wear what she’s wearing. I think Emma Stone does that really well, too. I think it was the [Golden] Globes one year, rather than a dress, she wore a really cool pant with this crystal bow in the back. It was really beautiful [and] elegant but still felt like a cool-girl look and accessible.”

Her favorite Ferragamo looks from our shoot:

“The blush-colored floor-length dress that I wore, with this really pretty rose gold sandal. It’s so Grecian to me, and you could wear it by the pool in California, but you could also wear it in the South of France. It just feels so beautiful and elegant no matter where you’re wearing it. And the plum shirtdress that I wore... I could see that at a nice brunch.”

On channeling her inner California girl:

“That little white dress—to me it felt very ’60s, but a California girl in the ’60s. You could wear that to a nice cocktail party, or you could wear that by a pool lounging at the Roosevelt! They’re all so versatile. Like, the khaki suit you could kind of wear anywhere. I think also you change the shoe—we tried it with this really cool Ferragamo flower loafer, and it looks really cool. Or you can do it with the platform, like we had. That kind of made it this oversized chic look.”

What her first-ever NYFW opened her eyes to:

“To spend time in New York, which is obviously one of the epicenters of fashion, was really exciting. It totally changed my appreciation of the fashion industry too, because I didn’t really know too much about it before I started going to fashion shows. I guess I expected the shows to be a little bit longer. They were so short! But it’s really cool. It gave me [a] whole other appreciation for the designers’ aesthetic and how you can also take something that’s on the runway—a look that’s so fashion-forward, it’s intimidating—but incorporate that into your daily life and make it easy to wear. When you walk into a fashion show, it’s not just the clothes; it’s the whole experience. I like how the venue shows the brands’ aesthetic, too. That’s really fun.”

How she describes the Ferragamo woman:

“I would describe her as someone who’s a girl of quality. She’s someone who appreciates the finer things, but she also doesn’t take herself too seriously. She can have fun. I think for me, two words that come to mind are ‘classic’ and ‘refined.’ It’s really sophisticated and elegant, but you also have fun pops of color and designs that keep it young and fresh, so it’s always a little bit unexpected.”

What drew her to her role on Runaways:

“I was really drawn to Karolina’s complexity. At first glance, when I saw the script, all the characters almost looked like stereotypes. But then the more I read the comic books, the more you see that Brian K. Vaughan, who wrote the comic books, is a genius because the characters are so different from how they first appear. I really love diving into these characters and seeing how relatable they are to other people, too. People aren’t always what meets the eye right away. It’s really human even though they’re superhuman. Like the Superhuman Breakfast Club. [laughs]”

How she prepared for the role:

“For me, what’s been one of the greatest things that I’ve gotten from this show so far is people who’ve said, ‘You know, when I was 13 and confused, I wish I had a character like Karolina Dean on TV representing people like me. It would’ve helped me a lot. It would’ve made things make a lot more sense to me at 13.’ I’m really honored to be able to play a role that can help people in that sense and hopefully broaden people’s opinions, empower people to feel safe with who they are. I’m really grateful for that opportunity. I think I just wanted to show the character as a human being, so I didn’t do anything too different in my prep work for that. I just wanted to make sure that I took an iconic character and did her justice.”

Her “getting into character” playlist:

“I have ‘Take Me to Church’ by Hozier, I have ‘Same Love’ by Macklemore, ‘Don’t Save Me’ by Haim, ‘Million Reasons’ [by] Lady Gaga, and then I also have ‘Cecelia and the Satellite.’ I have ‘Touch the Sky’ by Kanye West. Then I kind of go off the wall and have some other random songs on there, too. [laughs]”

On her holiday plans:

“This Christmas I’m going back to Sacramento. I think my favorite holiday tradition is my cousins and my aunts fly in from Wisconsin. Christmas Eve, we get these sugar cookies, and we decorate them. Then, in Sacramento, there’s an area called the Fab ’40s, which are these huge houses with beautiful Christmas lights, blocks and blocks of them. So we always drive around there. I look forward to that every year.”

Her tip for the perfect gift:

“I always like to go with something kind of unexpected. Maybe they mentioned it in passing, and then never really mentioned it again. I try not to give gifts that are too on the nose. I’m a funny gift-giver, too. I love to mess with people and get them a ridiculously stupid gift, just see what they do, and then have a real gift later for them. I do that a lot. The key to a great gift is just trying to surprise someone with something that they maybe completely forgot that they said to you because it shows that you’re really listening and you really care.”

The one thing you’d never guess about her:

“I’m a black belt in Tae Kwon Do. Pretty surprised to hear that [laughs]!”

What you can expect from her next year (big things!):

“I have this movie, Little Bitches, coming out in January, which is really fun… Like the female Superbad. It’s cool because it’s kind of a raunchy comedy from three teenage girls that’s very true to how real teenage girls talk. I don’t think we’ve seen that much in film. And then I have another one called Monster Party, which is a really interesting indie which feels like a Tarantino, very ’80s film. It’s political, also. They’re going to be awesome.”