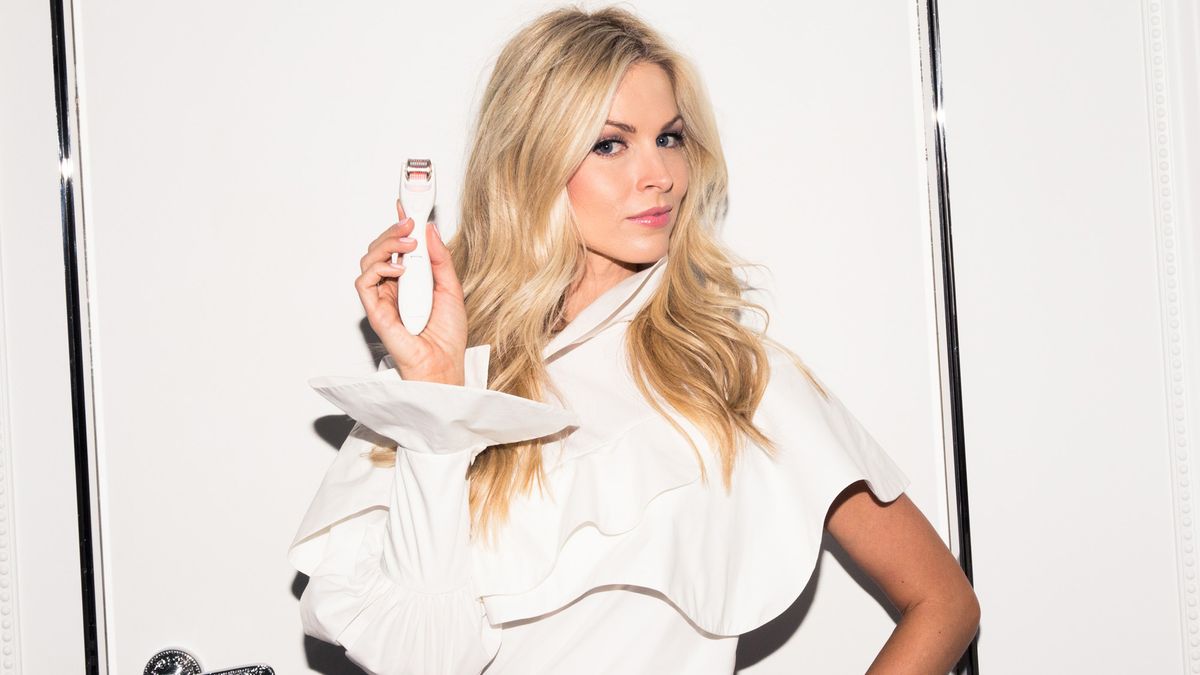 Beauty entrepreneur Jamie O’Banion on her skin-changing gadget, the GloPro.

Beautybio GloPRO is one of those viral beauty products that you hear about once and then it feels like everyone else is suddenly talking about it, too. Technically, GloPRO includes a whole line of skin-care products, but what gets people obsessed is the Microneedling Regeneration Tool, which is a $200 rolling device with 540 teeny needles on it that prick the skin as you use it. It does feel a little itchy, but the idea is that microneedling creates micro injuries that trigger your natural collagen production. (And we’re happy to put up with anything that might resemble a bitsy torture device for that.) It also has red LED lights, vibrates, and has clinicals that show 30 percent wrinkle reduction after a month. Not surprisingly, within a year of its launch, this creation became a $50 million company.

If there’s any living proof as to whether this thing works, it can be found by spending an afternoon with GloPRO president and co-founder Jamie O’Banion at the Baccarat Hotel in New York City, as we did. O’Banion has the kind of impossibly flawless skin that would lead you to believe she spends hours at the spa every week and has a whole staff of people making sure she eats, sleeps, and breathes only pure zen. On the contrary, this Dallas-based mother of three is constantly on a plane (she flew 100,000 miles between February and July of this year), hardly sleeps, and, she tells us, her daily exercise consists mostly of walking up stairs and doing resistance-band workouts while on conference calls. (She also does push-ups naked, but more on that below). Forbes thinks she could soon be one of the richest self-made women in the country.

Of course, we should probably give her genetics some credit, and it would be apropos considering that her booming business was launched with her father. The family literally owns a cosmetics lab (dream!). Below, we ask O’Banion about creating her company and her on-the-go beauty routine.

“My father is an owner of one of the top labs in the US for prestige beauty products. He and I have always been best of friends, very similar—we’re very close. He became owner of a lab in Germany and other involvements in Singapore, so from a young age he’d ask me if I wanted to go. My mother didn’t want to fly. He just took me with him to these meetings. Before I wore a bra, I could tell you what the skin concerns of someone in Singapore were and what kind of products they like. When I was 12, I helped carry over a microdermabrasion machine from Germany that was set up at our kitchen table, and we tested it out. When I was in college, we were working on this silver mask idea and totally freaked out my roommate’s boyfriend! It takes a lot of work to get [a new product] to the right place.”

Why the tool works so well:

“[The microneedling tool] has three technologies in one. The microneedling wounds the skin and unlocks the skin; the red LED improves collagen production, but it has to be within a certain wavelength, and we recommend you use it for one to two minutes to get all the benefits; and last is vibro-tactile stimulation, which is really important because it has a ripple effect on skin—it helps to stimulate skin cells we’re not touching deeper in the skin, and it makes it more comfortable to use. As we’ve tested it, most people get a bit of an addiction.”

People notice a change in their skin right away and down the road:

“If you use it for a good moment—20 seconds on each quadrant of your face—the next morning your skin is literally fuller. It’s this crazy instant glow that you get to the skin the first night. We recommend using it at least three times a week for one minute each time. I challenge people to use it for 45 to 60 days, but in our clinicals, we saw average 29.5 percent reduction in wrinkles after one month. So over six months or a year, you can imagine. Remember, after 18 you lose 1 percent of your collagen a year. Using the tool also helps your skin care absorb more effectively, so if you’re spending $600 on a serum, it’s your insurance. You can do a split-face study on yourself and see how the skin care soaks right in. GloPro is becoming for anti-aging what Clarisonic was for cleansing.”

“Our needles are .3 millimeters for the face. [With in-office devices for doctors,] we’ll go up to 2 millimeters. You’re bleeding, it’s a vampire facial, it is painful…and it’s $600 a treatment. We believe it’s more efficacious and you get better results with the regular use at home. It’s like exercise. It’s better if you’re doing at-home three times a week. In our studies, we found that skin couldn’t differentiate [between at-home and proefssional]. You can get even better results if you do every other day.”

“We basically made a brand-new molecule named TriGlo that’s a blend of retinol and a new molecule with retinyl to make this supermolecule. We took a philosophy like P90x to pushing the skin through those plateaus of improvement. Instead of six months, you get results in six weeks. When you go through the three-phase process [of the R45 The Reversal kit], we found a 49.5 percent reduction in wrinkles after a 45-day treatment. You can use [it] around the eyes and the mouth. You can use it with GloPro, too.”

“Before I flew out [to first go on air with HSN], I asked my assistant for flesh-colored M&M jars, because they look like skin cells, and I got a little silver-plated pen to show what [the microneedling tool is] doing in the skin. The moment I showed that on air, the lines lit up. I was worried that ‘microneedling,’ the word, might be scary, and when we got out there, we were not 30 seconds in and [the host] was saying ‘needling.’ But we sold out 2500 units in 20 minutes.”

She was on email right up until giving birth:

“The challenge of being a woman, whether you’re a mother or otherwise, is we end up being the caretakers of life. I have three kids: eleven, eight, and four. I was birthing the company and kids at the same time. When Gracie was born, they wanted me back on HSN when she was three weeks old. It was a huge show, but I was like, ‘I need to do this.’ I was on email right until the delivery room. My sweet mother came with me to Tampa [where HSN is filmed], and I would nurse the baby between shows and had the breast pump in the car.”

Her makeup routine is all the classics:

“My go-to is The Perfector, which is a 4-in-1 with sunscreen, which is super important to me. Women in Asia look 20 years younger because they are diligent about sunscreen and walk around with an umbrella. [The Perfector] is a primer, too. If I’m tired, I’ll mix a pump of foundation to brighten my skin. I usually just do a swipe of mascara. I love the L’Oréal Voluminous Million Lashes. I’ll do a little touch of NARS Orgasm blush. I use YSL brow pencil in #3. I do my own brows. I love the Charlotte Tilbury highlighter on the apples of the cheeks and Cupid’s bow. Revlon lip stain in Smitten stays on all day, it’s the most perfect berry.”

She’d rather pack shoes than makeup:

“I’ve had to really pare down my makeup because I travel so much. I never check a bag, even when I got to Italy or London, because I’m there for as little time as possible and the shoes take up the room.”

She only shops at one real store:

“I have no time. I don’t get into a store unless I’m doing a public appearance. Everything I buy online on Net-a-Porter, Moda Operandi, Neiman’s, and Nordstrom. I had to buy a $6,000 Marchesa dress for a gala, and I bought it online. The one store I will go into is called Hadleigh’s. It’s the most impeccable [store]. It’s on Madison Avenue in New York and in Dallas. I usually go every season to get a couple pieces.”

Fitness is not a priority:

“I believe everyone has one pie [of time and energy]. I have three kids, and I’m not going to be able to do yoga classes, I’m not going to be the PTA president right now. And that’s OK with me. So if it’s something that is not directly helping my kids, I have to edit in. For me, exercise is not one of those things. I take the stairs, I do 15 push-ups on the floor once a day before I get in the shower—I pray my husband doesn’t walk in on me—and in my office, I keep these red bands so when I’m on a conference call that’s not video, I’ll do the bands off my coat hook. You can burn your arms out in 15 minutes. I find that 80 percent of staying healthy is honestly nutrition. You have to look at it like a bank account that you’re budgeting.”

The Entrepreneur Behind Your Favorite Newsletter Started as a Sophomore in College
5 Things Mega-Successful Women with Their Own Beauty Brands Know
The No-B.S. Guide to Winning in Creative Business as a Woman