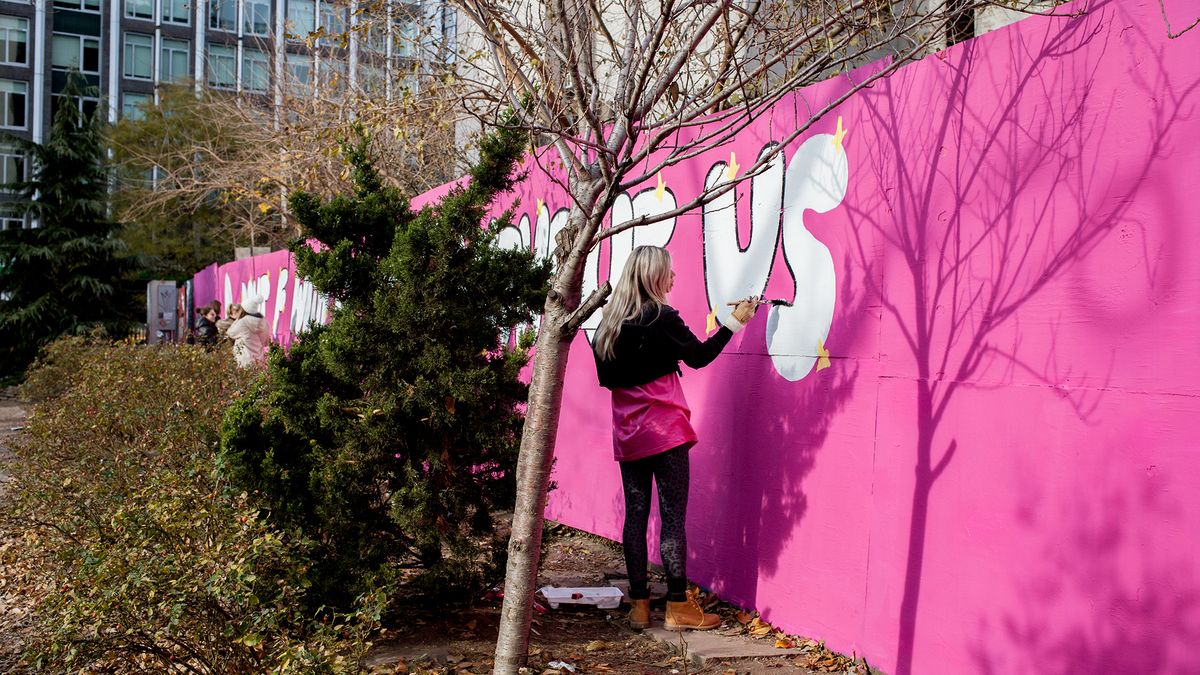 There’s a New Pink Mural in NYC, and Its Message Is a Powerful One

With the help of @butlikemaybe, Planned Parenthood is continuing to fight back against the war on birth control.

There’s no doubt 2017 has been a pretty trying year, but the silver lining in disagreeing with nearly every move your government makes? The opportunity to fight for what you believe is right—and doing it loud and in large numbers, much like Planned Parenthood. Over the weekend, Planned Parenthood of New York City partnered with @butlikemaybe’s Arianna Margulis for what it describes as “a call to action around the current legal and political war on birth control from the current administration.” In other words, Margulis painted PP’s slogan in large, white bubble letters on top of a bright pink background in the First Street Green Art Park as part of the organization’s continued effort to fight back. A wide range of models, influencers, and artists also popped by to show their support and lend a helping hand.

We spoke with a few of those in attendance about why they felt it was important that they were there, and their answers ranged from political to personal to hopeful about the year ahead.

1 / 5
Arianna Margulis, @butlikemaybe: “I’m super excited to get involved with Planned Parenthood, especially in the climate right now with everything going on [with] funding being pulled. With @butlikemaybe, I’ve kept more of a funny, humor, comic site, and I haven’t been super vocal and political. But this was something that I felt very passionate about and strongly about, and I was like, ‘This is where I’m going to take my stance, and I’m going to do it a hundred feet long.’ I’m really stoked, and it’s my first mural. I am so excited about the location, and the First Street Green Art Park has been really positive and encouraging. When they heard Planned Parenthood was going to be involved, they got super excited. I saw [Planned Parenthood’s] slogan, ‘Don’t F With Us, Don’t F Without Us.’ I thought it was really cool, very snarky and fun, and kind of integrated both @butlikemaybe and Planned Parenthood. I felt like she would say that—I call her she; she’s my character, but she’s also me. So that’s what I chose to do. I’m drawing her next to the slogan, with a spray can, with a kind of smirk on her face to be like, ‘Yeah. Don’t F with us. And don’t F with the women of New York—or anywhere, for that matter!’”