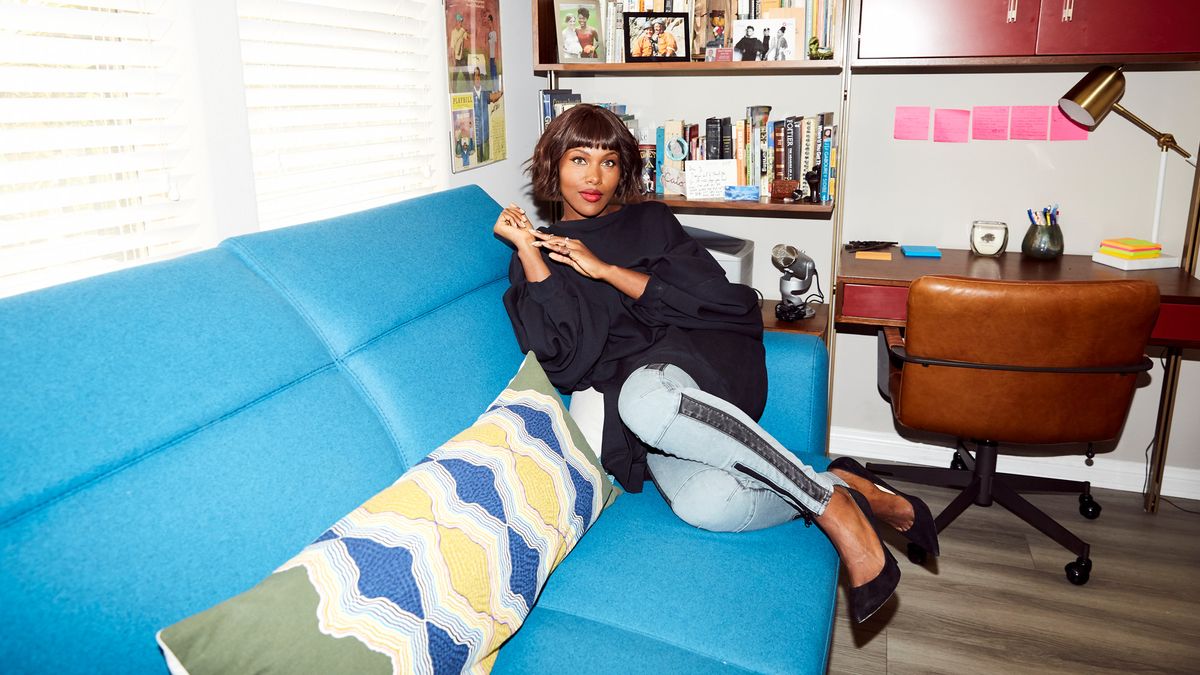 The star of the Netflix show talks body confidence, falling for her husband, and her crazy connection to Gina Rodriguez.

It doesn’t take long after chatting with DeWanda Wise for me to want to binge-watch She’s Gotta Have It. The way she describes the Netflix show—while admitting she, too, has always been skeptical of “reboots, remakes, or updates”—is with pure passion and excitement in her voice. And I’m positive it’s not just because she plays the main character, Nola Darling.

“When Spike Lee first conceived this idea, he was initially like, ‘What if a woman behaved like a man?’” Wise tells me, describing the now-iconic ’80s movie about a polyamorous woman. “It’s kind of remarkable how revolutionary it still is, but at the same time, how it’s caught up to a certain degree.”

Still, it’s not just the fact that I can picture this story line taking place today that has me hooked, or that the show is said to get even more in-depth with its characters than the movie. It’s really DeWanda herself, before I’ve even watched a single episode. With each new question, the actress shares a fascinating, often hilarious anecdote from her life—her strange connection to Gina Rodriguez, the moment she fell in love with her husband, Alano Miller, etc.—with such enthusiasm that I’m soon convinced she’ll have me just as intrigued on-screen, reboot or not.

Can you tell me a little about how She’s Gotta Have It the show differs from the movie?

“There’s a lot of space in the film, and a lot that’s happened in thirty years. It’s hard to fit a whole person into 90 minutes. It was a great opportunity to really flesh out [Nola Darling and the men in the film]. Part of what makes the show really interesting to watch is, as [the men] begin to evolve and become fully human, it becomes more complicated and difficult to say, ‘Oh, well, this one just satisfies this need,’ and kind of shrug it off.”

Are you happy to be a part of the Netflix family?

“Netflix is such a good fit. By and large, they let their filmmakers be filmmakers, and there’s just a ton of freedom in that respect. And obviously, working on She’s Gotta Have It, I feel very strongly about loving yourself and loving your body in nudity, so being able to be on a show where you can add cuss words and walk around in your underwear is the fucking best! [laughs].”

Is there nudity on the show?

“That’s the joy of being Nola Darling. I’ll just walk around set with my robe open. I grew up with a single mom who just never had clothes on, so it was never that strange. I think confidence really stems from knowing yourself super well, and I think I do. I’ve binge-watched this whole show. I’ve seen the shots of myself where I’m like, ‘Man, DeWanda, if you sat up, you wouldn’t have had that stomach roll, but oh well!’ A huge theme in season one is body confidence issues, which we don’t really talk about for women of color. We’re characteristically kind of qualified as strong and confident, all of this bullshit that doesn’t exist. So part of my confidence came from being like, ‘OK, my agenda as a storyteller, as an actor, as a kind of feminist icon playing Nola is not to be a woman without flaws, but to be a woman who is like, “You know what? I’m going to live in the world with my flaws, and you’re welcome! You’re fucking welcome!”’ It became essential to embody that degree of permission, because I don’t think we see it enough.”

How did you get your start?

“I went to school at NYU and started acting professionally when I was still training. Gina Rodriguez was my first manager. She has always been the hardest-working person I know. Gina was so thorough that she was interning at this management place and then started working at the agency affiliated with it. She would be on the phone and had her agent persona—different name, the whole bit—and would be pitching herself, getting appointments. Yes. Yes. Yes. But I started in college, and in the middle of all of that—the indie features, the indie shorts—I’ve had a billion jobs. I’ve worked overnight at Trader Joe’s. I worked for Homeland Security when I was still in high school. A lot of life packed into not a lot of time [laughs].”

Your husband, Alano Miller, is also an actor, and your relationship has been labeled “couple goals.” Is that weird for you?

“I’ve been married for eight years, before social media. So the explosion of this idea of couple goals, or power couple, is just fascinating. From day one, I saw Alano doing a play, and I was like, ‘Oh, he’s phenomenal. Also, we should be married.’ Seeing him work fueled my suspicion that we should be together forever. So I put together a press packet for him with his head shots, and we walked around to agencies in the rain in New York to get him a better agent at the time. That was the beginning, and that gesture, I would say, is ultimately the defining characteristic of our marriage. It’s always just been, ‘I legitimately want the best for you.’ There’s nothing more emblematic than being married to an actor and working on She’s Gotta Have It. You would have to be with a man who’s like, ‘At the end of the day, I want what’s best for you’ [in order for you] to be like, ‘Oh hey, honey, I’m going to pretend to be in this polyamorous relationship, and also, there are sex scenes.’ There’s no other way that we could work if it wasn’t about having each other’s best interests at heart first.”

Speaking of couple goals, what is your overall goal?

“The goal is to make room. I spent plenty of years with enough false starts to know that it takes a ton of work. I’ve also had a lot of people who have supported me in ways that I can never repay. Ultimately, our ‘couple goal’ is to [continue moving forward] in life and in art. We’ve produced already. We plan to continue to do so, whether we’re in it or not. We just want to make the imprint on the world that we’re meant to make, in the short time that we have.”