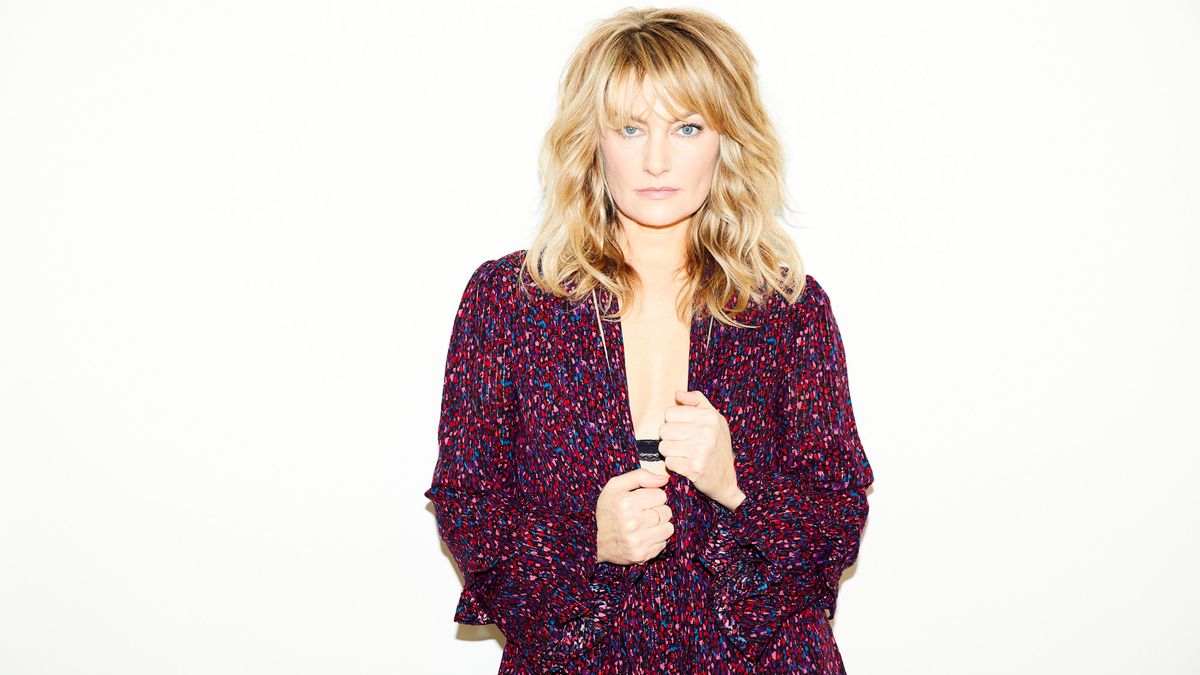 Will We Finally Learn the Truth about Alice Cooper and F.P. Jones on Riverdale?

Calling all Riverdale fans! We talked to actress Mädchen Amick to get some answers.

On every show, there’s always that one character you love to hate, then kind of love, then decide you hate again. And on Riverdale, that honor belongs to the character Alice Cooper. At first, Betty’s prim and proper mom seemed strict and sketchy and 100 percent evil. But a few episodes into season two, we’re finding ourselves even more curious about the woman behind that tough facade—aka a woman with a mysterious past and possibly some sort of relationship with Jughead’s dad (gah).

Unfortunately, when we spoke with Mädchen Amick, the actress who plays Alice on the show, she was tight-lipped and couldn’t spill any secrets. But we did get a few hints out of her, including some story lines that will be explored further, the truth behind her shaggy haircut, and why the second half of this season might be a bit different than the first.

In a few words, how would you describe this season so far?

“The stakes feel like they’ve gotten even higher. Last season, we were dealing with a high school student who had been murdered, and it was a mystery of who did that. Now, this season, it’s the threat having expanded over the entire town. Everyone is in danger, and everyone could be a target. I think that just raises the bar and brings a lot more tension. We’re still going to continue to find out the different family drama and get into their layers and secrets and everything. But I think, just overall, it’s an even more serious note this season.”

Your character, Alice Cooper, kind of gets a bad rap. What do you think of her?

“I love Alice Cooper. She’s so complicated and inappropriate, but she always does it with very good intentions to protect her family—she’s just a fierce mama lion. I love that we really hated her at the beginning of last season. Roberto [Aguirre-Sacasa, the creator of the show] knew there was going to be a lot of family drama and that we were going to see [the reason] behind why she acts the way she acts, and that the audience would eventually be rooting for her. I said, ‘We really gotta push it as far as we can, because the higher we build her up, the farther she can fall.’ I had to really figure out what her intentions were all the time. It’s really great that we saw her arc and we got to meet her. All of her walls come tumbling down, and [we] see what was happening behind her very strong facade of being self-righteous and judging the entire town. I think deep down—even if you do it in the wrong way—everybody roots for the underdog. Underneath all of the facade, she truly is an underdog, and you’ll get to know that story line more and more as we go.”

Do you know Alice’s backstory?

“I actually know quite a bit. And it’s fun. We’re going to be able to see a lot of that come out this season. As F.P. Jones mentioned last season, I don’t know what his line was, [but it was] definitely in reference to the Serpents and their Serpent past. We get to see more of that. A lot of good secrets coming up.”

You’ve been posting photos with the actor that plays Alice’s son, which is a bit of a spoiler, no?

“Lili and I are both so thankful that Hart [Denton] was cast to play Chic. He’s such a great person and so enthusiastic. We really wanted to welcome him to the family, so we talked about [posting]. We’re always trying to be really careful because sometimes we even feel that CW sometimes gives away a little too much.”

Why should Riverdale fans go back and watch Twin Peaks?

“I didn’t necessarily see the correlation when I first read the script, but once it went out to the critics, and they started bringing up the comparison, I realized, ‘You’re right.’ It’s a story about a high school student that was murdered, and we get to know the town through that. We absolutely broke the mold and completely started a new avenue for filmmakers to come to television and basically do small movies every week. I think in general people should watch it, and I think all of the Riverdale fans will love how much of an influence Twin Peaks was on our Riverdale creators.”

You posted a photo with a shaggy haircut, and you look a little like Taylor Swift. Have people told you that?

“I always change it up and wanted to get a new haircut for [the] second season, but there is this scene where Alice is a little more, let’s say, rock-and-roll than she is normally. I can’t tell you what she was up to that night, but as the shaggy bangs showed, she was having a lot of fun.”

Do you have anything else that you can share?

“I think the fans can look forward to… There are a couple of different arcs that happen that Roberto very carefully crafted, and the first nine episodes are a really great arc, and then the back 13 goes on a little bit of a different arc, so I think the fans will enjoy all of those story lines that are going to weave in and out and all of those arcs that are going to happen.”