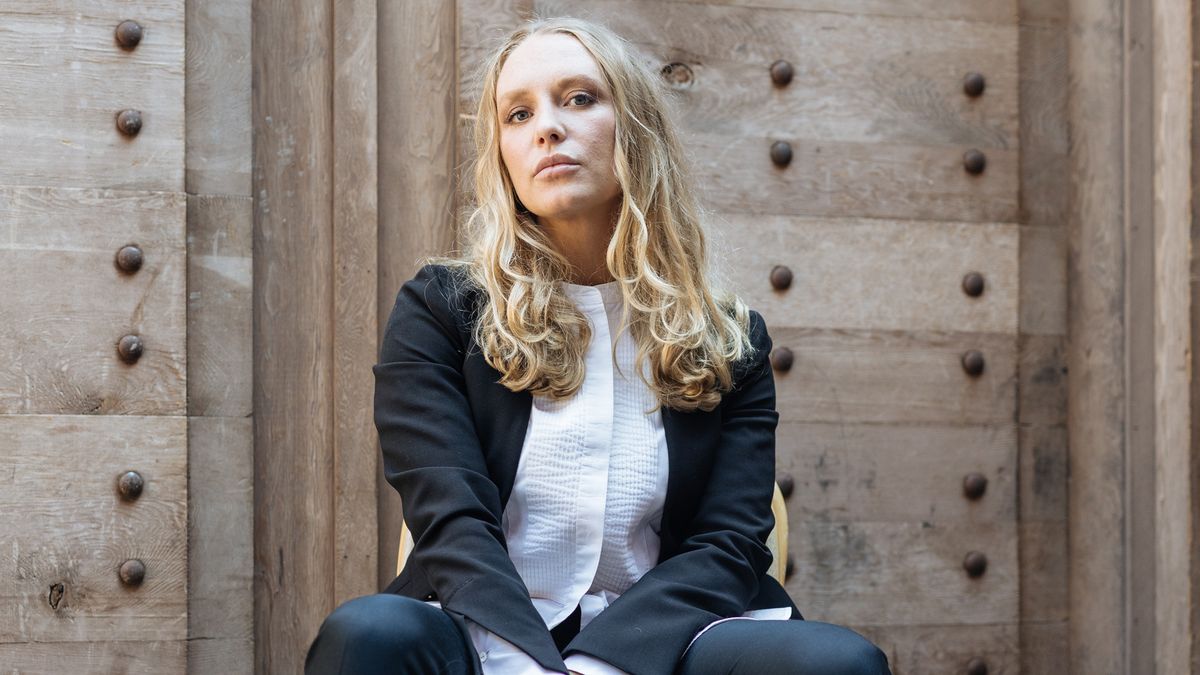 She starred in Stella McCartney’s campaign and acts alongside her famous mother.

Annie Starke has spent a lifetime in the film industry, but it’s her latest role alongside her famous mother, Glenn Close, in the literary film The Wife—Starke plays a young Joan Castleman, the same role played by Close—that’s catapulted her into the spotlight. We sat down garden-side in Toronto after her premiere at TIFF to talk about what it was like growing up on the set of 101 Dalmatians (so. many. puppies!), the advice her parents gave her on a career in film, and why she’s such an advocate for Puppies Behind Bars, a foundation that pairs inmates with dogs training for service with the NYPD, as well as cruelty-free brands like Stella McCartney (Starke starred in a recent campaign, too).

When did you decide to get into acting?

“Five! It’s funny because I kept it a secret for so long, and I tried desperately to, quite frankly, avoid this business. I knew exactly what I was getting into, and for that reason, I was extremely hesitant to dive in. Truly, I think, to be an actor, it’s literally part of who you are. [I] pissed my dad off, I will tell you [laughs]. My mom was totally into it. My dad was [like], ‘What? Why?’ [I was like,] ‘Thanks, Dad. You’re also in the business, but OK. Thanks for the...support.’”

Ha! So what did he want you to do?

“I don’t know. Build boats or something [laughs].”

What sort of advice did your parents give you when you decided to make it a career?

“Truly, both of them have always said, ‘You have to stick to your gut. Be strong,’ because it is a wicked industry. It constantly tries to mold you into something else. [They always tell me,] have confidence in yourself. As simple and as elementary as that sounds, I think that it’s an unbelievably difficult thing to do.”

What was it like growing up in the film industry?

“It’s a testament to how great my two parents are—I was exposed to the craziness, but I also was so not. They tried to always maintain a very strong level of normalcy in my childhood. For that, I’m forever grateful. But in terms of fabulous moments—gosh, 101 Dalmatians. That was the best set to hang out on. One hundred percent. Covered in puppies.”

You mean, heaven? What was it like seeing your mom play the villain?

“I was pissed at her. I was so mad. I’m joking! We had so many animals growing up. I was like, ‘How can you? How can you do this when you know that all of our beloved animals are back at home?’ [laughs].”

You’re a huge advocate for Puppies Behind Bars. How did you get involved?

“It’s such an incredible organization, founded and operated by an unbelievable woman named Gloria Gilbert Stoga. She worked a ton with veterans and on the prison system—she beautifully combined the two. In the prison system, it’s really helpful for [those within it] to be contributing to society. That’s how they are reintegrated into the world. These are men that unfortunately have been put in the system from a very young age and have yet to find their way out. The long-term prison inmates train service dogs for wounded war veterans, and bomb-sniffing dogs for the NYPD and Boston PD. It’s incredible. It’s so meaningful. Not only to [have] everybody involved, but especially to the prisoners, who now have the opportunity to directly and enormously help and elevate the happiness and well-being of another person. Dogs are therapy, and I’m a very lucky owner of a released dog. He didn’t quite make the cut. He would’ve been a terrible service dog, but he’s a wonderful hangout partner for me.”

And you just did a campaign with Stella McCartney, another animal lover, with your mom.

“I’ve been obsessed with Stella McCartney ever since I had a sense of fashion. She’s [a] pioneer in using cruelty-free materials. I think she’s just a rock star of a person. I hope to just drip myself in all of her clothes for the rest of my life. Talk about ultimate girl crush.”