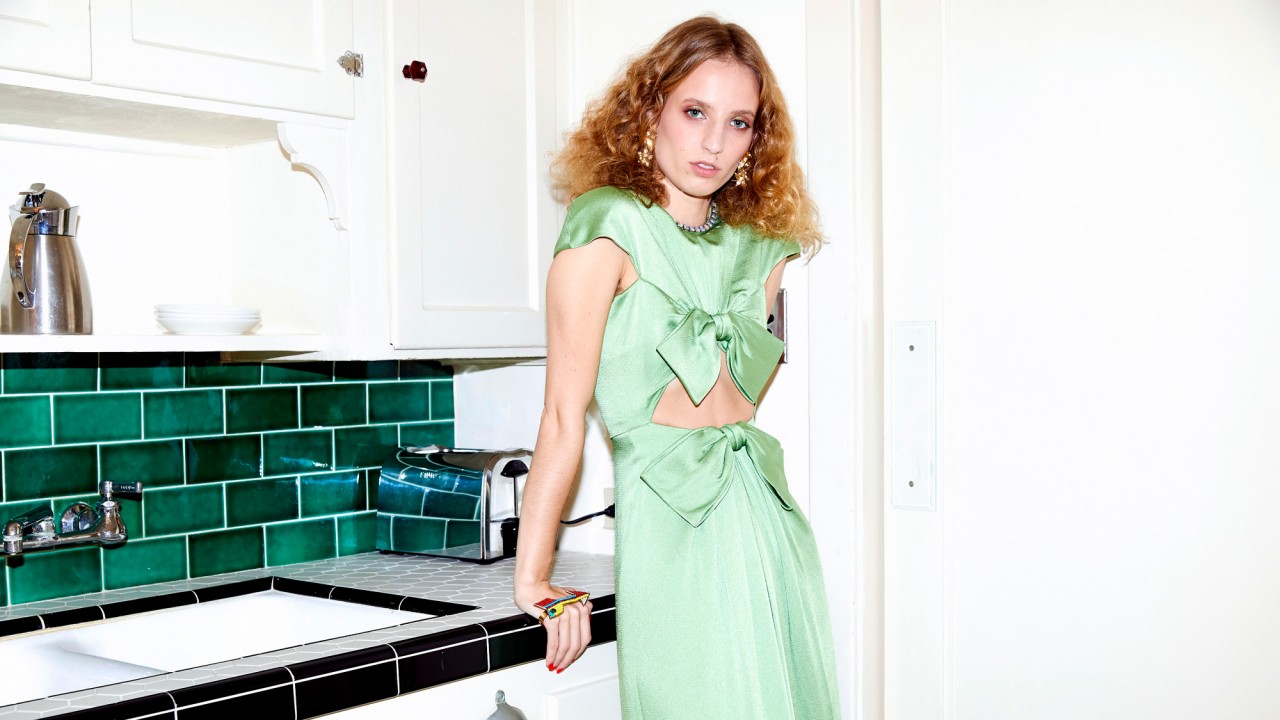 “[When I go out] I just love taking a long shower with music, and then I just chug water basically, because it’s the thing that keeps my skin good. I’m a big fan of peanut M&Ms. That’s the mix: music, shower, M&Ms [laughs].”

“I have a very specific playlist for each mood [when] I get ready. We started off with this playlist called ‘Chill.’ I have some Patsy Cline, some Nina Simone, The Shirelles, Minnie Riperton, Massive Attack, Dead Moon, obviously Wicked Game by Chris Isaak. I’ll listen to this when I shower. Then it switches to this playlist called ‘Slutty70s80s’ [laughs] so there’s more Minnie Riperton, there’s Marvin Gaye, Donna Summer, there’s Andrea True Connection, The Dramatics, Heart, Bill Withers, Barry Biggs. Then later, when I’m driving, I really like listening to Gucci Mane, [laughs].”

“[My gown] was actually custom-made for me by Alessandro. Last year [at LACMA] I had a full-coverage orange gown, high neck, really busy. This year I decided to go super simple in a way. It’s simple in Gucci land, but I love that color. [It] looks like the color of my eyes, so I was sort of drawn to it. Also, I love George Lucas, and I feel like it’s very Star Wars. When I put it on, I was like, ‘I feel like Princess Leia.’ It’s not just a normal evening gown. That’s what excited me about it, because I’m not a little-black-dress person.”

“I have the gold platforms, which are a must, actually. They’re my staple with Gucci gowns, because they’re basically disco platforms. They give me a lot of height, and they’re also super comfortable to walk in, and comfort is my main thing. I’m probably going to wear the arrow palm cuff [from] Alessandro. It’s cool, and I feel more [of] an alien vibe. Then I may put those silver wolves on, and then I have these vintage gold star earrings. I don’t wear small earrings because my hair is big, so I need to do a big earring.”

“I’m obsessed with Grace Jones, I love all her looks. Actually, I just went to a party that was ‘Paris Is Burning’ themed. I got to do Jerry Hall hair and that ’80s glam makeup. I never do that because I’m not going to do it as my day-to-day, but I had all these references of Jerry Hall and Grace Jones. Then there’s Octavia St. Laurent. She just had this glitter bodysuit that’s killer. I love those ’70s and ’80s glam looks.”

“We’re doing this iridescent green [eyeshadow]. I don’t like doing a dark eye. Day-to-day, I usually don’t even do anything—just for events. I don’t really like having my makeup done [laughs]. I think less is more.”

“I’m really intense about my skin [laughs]. Last winter I got dermatitis. I was putting masks and creams to try to fix my skin, and I ended up hurting it. I went to a dermatologist, and they were like, ‘You just need to put nothing on your skin.’ So now I wash it with Cetaphil, put some antibiotic cream on it, and drink water. My skin is so sensitive, I’ll just break out otherwise. It’s so weird, I’ve never been able to wash my face over the sink. I go in the shower.”

“I don’t think pimples or imperfections are bad or ugly. I have really dark circles, and I like to let them be, and my freckles, because I think makeup is more about adding something fun rather than concealing. It always feels so great when people post photos of their skin, or any imperfection, because you’re like, ‘Thank god you have that too,’ and I feel a little bit more human. I’m tough on myself, but when people have a pimple or two I always think it’s really cute [laughs].”

“The one thing I do all the time is curl my lashes, like to a psycho degree, until it hurts, because I like the little bit of red, too. Oh my god, that’s so bad [laughs]. I’ll do it on the street sometimes. I live in New York, so I’ll be walking with my friends somewhere and I’ll just take out a curler. The Kevyn Aucoin one is so good! I love a tinted lip balm—I love this brand ILIA—that I can put on my lips, my cheeks, and my eyes. Then I’m good!”

“I have really specific scent memory, actually. The reason I really love Gucci Bloom is because I would play outside so much as a kid, but I was always really allergic to everything, so it’s nice having perfume that smells like my childhood garden that I wasn’t always able play in. I love that it has these dark tones to it as well as light tones. It’s very close to my personality, but [it] also gives you a little more story. Rather than like, putting something on that’s supposed to change you or make you into some sort of desirable thing, it’s to have an experience or an adventure.”

“I actually don’t do anything [to my hair]. I just have to take a shower and then sit and wait for the curls to show up. I use the clarifying Pantene shampoo once a month, because I’m constantly traveling and I like to keep it as clean as possible. The best advice that any hairdresser has given me is don’t buy any expensive repairing shampoo because your hair health comes from your body, not anything that you’re putting through your hair. The one thing that I love, though, is beach hair. If I could just bottle saltwater and put it in my hair... It’s a really good product [laughs]. When I’m in the sun I put lemon in my hair so it bleaches it. I’ve never dyed my hair, but I’m crazy with the lemon in the summer.”

“As I move and my career grows, and with my book too, I want to make sure everyone sort of knows where I’m coming from. I’m very open about mental illness and how I feel about my body, because it’s really tough [being] in this world where there are so many images. Even images on Instagram with Facetune and everything, you’re like, ‘I don’t know what’s real and what’s not, and I don’t even know what I’m supposed to look like.’ So, I just always try to keep it as real as possible.”

“I used to be a dancer, and I loved being onstage, so I’m very comfortable [on the red carpet]. I had a really bad injury and had to get surgery, and that’s why I started photography, because I wasn’t able to express myself in that way.”

“[In my bag for tonight I have my] phone charger, because my phone is constantly dying. Lip balm, an eyelash curler, and maybe a candy. Then I always bring headphones. Whenever I leave the house, I love to just put my headphones in and listen. It’s such a creative space to be in. I always love when I take the subway or when I’m walking or whatever to have that moment to yourself to listen to a song. If I leave the house without my headphones, I turn around.”

“[My book] is kind of a retrospective of my work so far, from 15 to now, so it’s nine to 10 years. It’s a lot about my life and the way I felt about my body and being a teenage girl. I’m really excited because I feel like I’ve told my story, but I’ve not necessarily had it published and written firsthand. It’s extremely personal, and it’s really beautiful for me to see. It’s really exciting. My little sister is on the cover, and the photo kind of looks like a Renaissance painting on this furry cover. I love mixing all these eras together, which Alessandro does so much in his clothing too. People use the word ‘nostalgia’ with us a lot, but it’s sort of nostalgia for a history that never happened.”