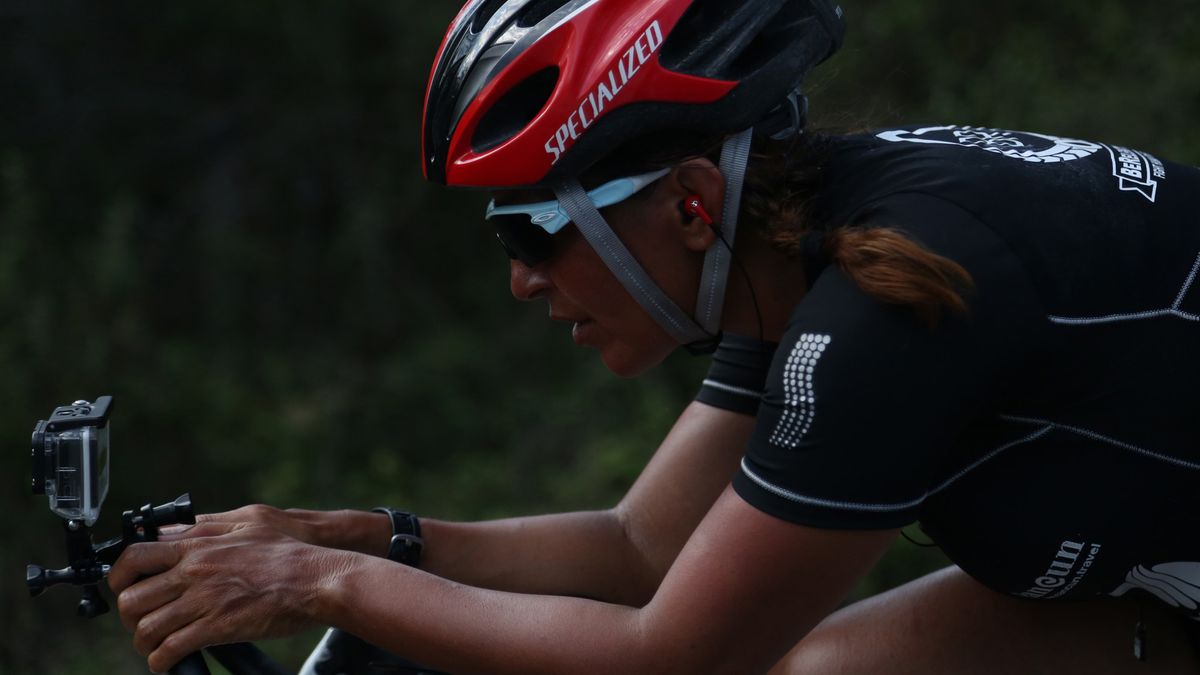 The awe-inspiring, record-setting athlete opens up about turning nightmares into dreams and her hopes for the future of women.

Ultra-marathoner (she once ran double marathons over an icy tundra in Antarctica), mother of two, and World Record breaker Norma Bastidas, 49, is an inspiring figure to those who realize how much she has achieved. But to learn not only how much she’s accomplished, but how many difficulties she has overcome to get there, makes her journey that much more awe-inspiring.

A keynote speaker at the Visionary Women “Grit, Guts & Grace” salon last month, Norma—who was kidnapped and forced into prostitution at age 18—told the 300 people gathered at the Montage Beverly Hills, “I see it as my privilege, to not live a life of nightmares, but a life of dreams.”

She began turning her life around through running and has said that she first began running at night “because I didn’t want my kids to hear my crying.” Once she started, she never stopped. In 2014, Norma broke the world triathlon record for longest route when, over 65 days, she ran, biked, and swam from Cancun, Mexico, to Washington, DC, covering a major human trafficking route. Her journey was the subject of the documentary Be Relentless.

We spoke with Bastidas about her past, her vision, and her hopes for other women struggling to overcome unimaginable obstacles.

“I grew up in Culiacan Sinaloa [Mexico] surrounded by violence from the cartels. I saw my first stabbing when I was seven years old in my neighborhood and also experienced sexual abuse from a very young age. My father died when I was 11; I was the youngest of five children, and my mom and siblings were just trying to stay alive since my dad didn’t leave money. They didn’t notice when a family member started abusing me.

“Later, at age 19, I accepted a bogus job offer to go to Japan as a model and hostess. Instead, I ended up being forced into the sex industry and worked as a high-paid escort without access to my passport and massive debts to pay back to my captors. Eventually, I was able to buy my passport back, and I decided to stay in Japan as a student to pursue a degree in Japanese literature. But even then I couldn’t escape violence.

“One night I was attacked and almost murdered, and when I reported the crime to the police, it was never investigated. I was told that the attack was ‘due to my lifestyle,’ and nobody was ever held accountable. For the longest time I lived a life of self-loathing. Thankfully, I held on to the instinct that it was not my fault, which kept me from giving up.”

How she started to heal:

“The path to healing was confusing and messy. For a long time, I was told it was my fault that those things happened, even by people close to me, so it’s difficult to heal when all you feel is silenced and shamed. It wasn’t until I was 32, divorced, and became a single parent in Canada that things started to change.

“I was so determined to break the cycle of abuse that I took a journey of self-awareness and to self-love. Training and racing are the places that I turn to when I want to tap into that place where I am not distracted by the world, just nature and me trying to figure out a solution to a challenge. I love long races because it’s not uncommon to be alone for long periods of time, and it’s during those times that I check in with myself and ask simple but important questions that I don’t often ask, such as, ‘Am I happy with how my life is going?’ or ‘Is there anything I need to do to improve my current situation?’”

How she started training:

“I wouldn’t say I was [always] athletic; I was never picked for any sports at school or made to try out for any teams since I was a skinny, short kid, and everybody assumed I was either too frail or not good at sports just based on looks. I did end up learning aboriginal dances at school as part of the government initiative to preserve the native culture, but it was really only at 39 years old, when my oldest son started to lose his sight, that I began to run to deal with insomnia. By then I didn’t care anymore what people thought of me, I just went for it. It helped me manage the stress I was experiencing from dealing all of a sudden with my son’s permanent condition—Cone Rod Dystrophy, which leads to early vision impairment. I had no idea how to help him at the time.”

Her advice for women who have faced similar circumstances:

“You are not your circumstances. Your current situation is where you are, not who you are. It might be a long journey, but if you keep persisting, you will get to the place you deserve to be. Before my Guinness World Record for the longest triathlon, I couldn’t even swim! But I refused to be discouraged by that, even after everybody around me told me to find the other record to break. I went to the pool every day until I could swim: 18 months later, I almost tripled the previous record by swimming 122 miles in open water.”

What it means to her to be part of  Visionary Women:

“It’s such a privilege to be part of such an elite and successful group of women that are working hard to empower other women and leave their mark in the world.”

Want more stories like this?
Meet the Activist Who’s Probably Going to Save Us All
The Woman Fighting for Marginalized Workers’ Rights in D.C.
The Upstart Media Brand That’s Changing Fashion’s Perspective