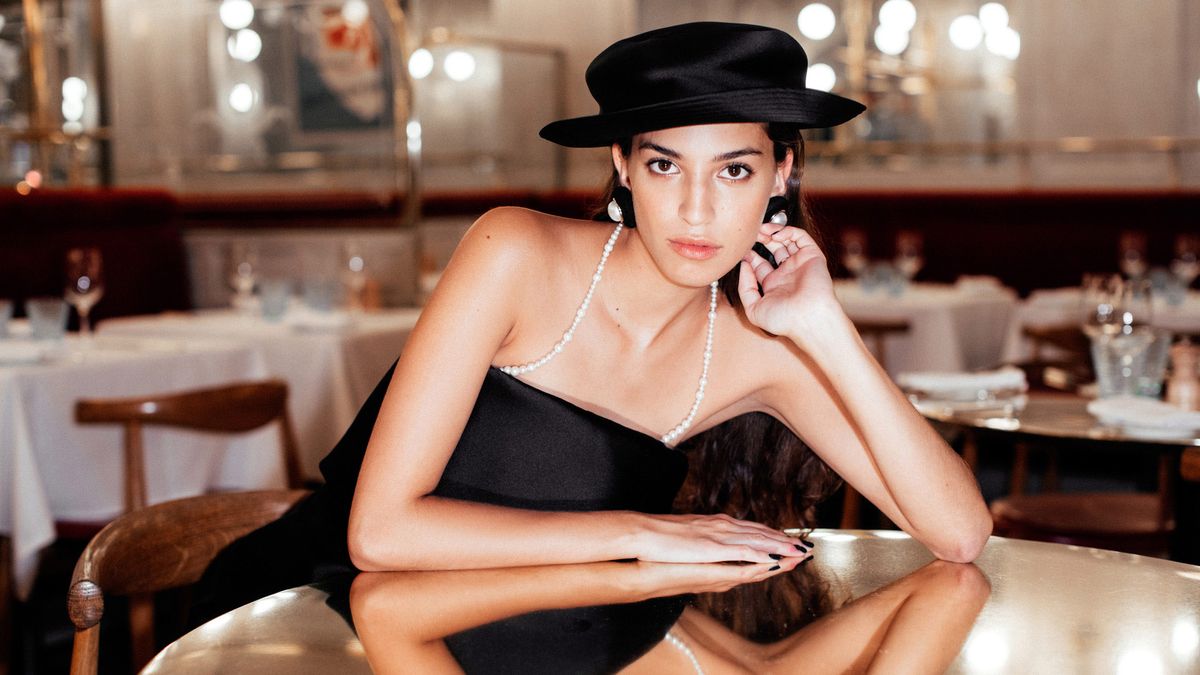 With a last name that’s synonymous with style, she’s also set out to launch her own brand.

While I was buttoning Marina Testino’s CHANEL couture dress, I tried to tell her about the particular look she was wearing when she turned around and instead told me about the inspiration behind the entire collection. “You know,” Testino says offhandedly, “this collection was inspired by how the iron on the Eiffel Tower changes colors from day to day—from sunset to sunrise.” When I comment on one of the buttons she can’t help but chime in, “The buttons were inspired by a French cubist artist, and each one is different.” Evidently I didn’t need to tell her anything about CHANEL’s most recent Couture collection. She already knew more than I did.

But then again, Marina Testino is no stranger to fashion; with an uncle who made a towel the epitome of chic, Testino was born to lounge on velvet red chairs in sequined CHANEL dresses and hats. And even if she was dressed by the iconic brand for the Bazaar Icons party and was invited by them to their showroom days later (where she learned how to school me in CHANEL trivia), she admits the only CHANEL she owns is a classic black CHANEL bag, a gift from her grandmother. “Oh, and those sparkle boots.”

But Testino, who recently graduated with a degree in fashion marketing from Parsons, doesn’t just love CHANEL for its sparkle and glamour, but also for the woman behind it all. Coco Chanel serves as an inspiration for Testino’s newly launched brand, Point Off View, in which she creates casual and comfortable pieces while collaborating with artists for limited-edition collections. With ruffle tops and jean jackets embroidered with phrases that she hopes encourage people to speak their minds, it’s easy to see how Testino was inspired by Coco’s affinity for standing out and lack of concern for what others think.

While lounging at Benoit (essentially Paris on 55th street), we spoke with Testino about her collection, where Coco Chanel would go in the East Village, and what the designer would think of 2017.

If Coco Chanel were to wear a look from the Haute Couture fall/winter 2017/2018 CHANEL collection, it would be:

“I think she would wear more of a suit-ish look! I thought this collection was maybe too girly for her, at least all of the looks I wore. But if she were to wear one…I think it’d be the pink one. The other ones were too feminine!”

If Coco Chanel were to spend a day in the East Village, she would:

“I know she loved the arts and the art scene. There’s a couple of galleries around the East Village that she’d love. There’s also the New Museum! And I think she would go have dinner at Lucien every night and go have a drink or grab breakfast on Bowery.”

“She said, ‘Luxury must be comfortable, otherwise it is not luxury.’ One of the things with my brand, Point Off View, is that you don’t want to be wearing things that are uncomfortable. You want to feel pretty but feel comfortable.”

To her, the most surprising part of the CHANEL couture collection was:

“What actually really impressed me by the couture collection was that everything was really comfortable! Nothing was heavy–and it looks like the things are going to be super heavy, super uncomfortable, like you’re not able to walk in them. But you feel beautiful in them and you’re comfortable, which is one of the things that is very hard nowadays with any brand!”

Just like Coco Chanel, she likes to speak her mind:

“The idea behind my collection is the thoughts of young women. We’re all so influenced by social media, technology and what people think of us and how we’re categorized. You’re not really allowed to speak up and say all these things that run through our minds every day. Instead we’re saying, ‘Oh, I don’t want her to think I’m like this,’ or ‘I don’t want to be rude to her on this thing.’ So my line has these sassy kind of fun sentences embroidered on. It’s essentially wearing all of these thoughts but you’re not saying them! So you can’t be judged for them. But then again you’re wearing them, so it’s like speaking up to...kind of telling people that you can say all these stories. You’re not going to be judged.”

But she’ll also let her clothing speak for itself:

“I really liked the idea of doing that because nowadays everyone has everything. Nothing is special anymore! I don’t know where to shop, but I know I don’t want to buy the same purse that I’ve seen 10,000 times–even if it’s pretty. You see it on everyone, so it’s no longer special. Point Off View was based on that idea of doing a brand that merges art and fashion and also that has limited-edition collections. I’m working on collaborations with different creative people. Not only artists; it can be a poet or it can be another designer or it can be a painter. These collections would be limited-edition, so not everyone would have it; just a few people would. Then you would be wearing a piece of art!”

If Coco Chanel could wear one of her pieces, she thinks it would be:

“I think the ruffled jacket! The denim jacket is too streetwear.”

What Coco Chanel would think of 2017:

“I think she would be impressed by how we’ve been able to kind of progress. Now with Trump, it’s going down, but I think she would be super proud how—especially in New York—you see everyone and anyone wearing whatever they want. It’s pretty incredible seeing how it was back then and how everyone now just expresses themselves however they want by the way they look and what they wear. Especially in Parsons! [laughs] Everyone is just like a completely different character, and you can tell they speak to you through their clothes.”

Couture
More From the series Fashion