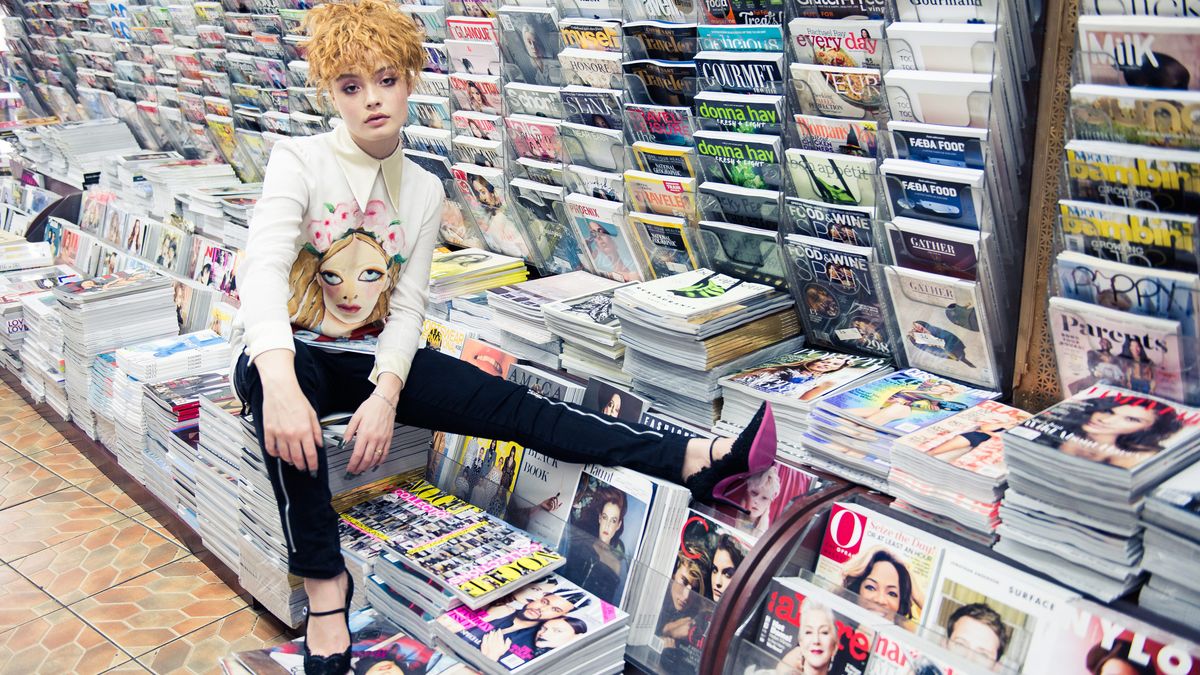 Mark our words—Mallory Merk is about to be everywhere. In collaboration with Gucci.

The story behind Gucci and Unskilled Worker’s AW/17 collaboration is a tale as old as time.

As with all things Gucci, the brand’s partnership is a modern approach to creative collaboration—and makes a serious sartorial statement comprised of portraits of muses clad in maximalist looks from the Italian house. As for how to pull it off? We asked three women with distinctly different approaches to dressing to show us how they mix the collection with pieces from their own wardrobes—even when headed to locations ranging from the everyday (the bodega around the corner) to the extra (a Chinatown arcade). DGAF attitude sold separately.

Mallory Merk can only be described as ballsy. It’s the same attitude that's gotten her noticed by industry leaders (both in fashion and music—she’s an avid musician who’s constantly recording and writing) ranging from Rihanna to Kanye West to Pat McGrath. And much like her mentor Rih, Merk has an unshakeable sense of self—something she *also* shares with her vision of the Gucci woman. As someone whose fascination with the brand goes way back—she used to steal her stepmother’s logo-covered diaper bag while in grade school—she has a crystal-clear idea of who the brand speaks to now. Merk sums it up nicely: “You can dress nicely and do this and that, but it doesn’t necessarily mean that you’re a doll, or you’re a girly-girl. You could still put it down. The Gucci woman doesn’t let no man tell her what to do.” Amen.

Her approach to getting dressed: “I like to mix expensive pieces, or fashionable, fly pieces with sweatpants or sneakers—stuff that I always wear, like Air Force 1s. I would describe [my style] as tomboy, but also fly.”

How her style’s evolved over the years: “I went through a little punk phase where I dressed like Sid Vicious for a while, and that still plays into my style.”

How she gets the confidence to pull off Gucci’s more OTT pieces: “I like to wear what I appreciate. I appreciate art, so to be able to wear Unskilled Worker’s art on clothing is really fly to me. You’re rocking somebody’s art, so you’re a piece of walking art.”

How she got her start as a musician: “I started recording professionally about two years ago, when I got access to the first studio I ever went to in Manhattan. I’m continuing to record, make little mixtapes, and then eventually [will work on] a big album.”

How she describes the Gucci woman: “A Gucci woman is someone who is fashionably late because then everybody’s going to see her outfit when she walks in. [laughs] A Gucci woman always has something that is fly to hold her items; a purse, a clutch, little backpack, or fanny pack. They promote the almost classic parts of being a woman while also being futuristic. You can dress nicely and do this and that, but it doesn’t necessarily mean that you’re a doll, or you’re a girly-girl. You could still put it down. The Gucci woman doesn’t let no man tell her what to do.”

Favorite person to follow on Instagram: “Snoop Dogg’s Instagram is funny, and he’s lit. He always posts the most relatable pictures at, like, three in the morning. So many memes, and I just be rollin’, laughing so hard at my phone.”

Her musical influences: “I grew up listening to a lot of different music from my parents. We listened to A Tribe Called Quest, Amy Winehouse, Rolling Stones—all different genres. Jazz music, even, Nina Simone. Everything. I also hung out with a lot of boys who would freestyle. I always knew I could write well, so I started putting together flows. We used to make funny parody songs or rap videos when we were younger, on some musical art wave.”

The last thing she binge-watched: “Narcos on Netflix.”

What it’s been like working with Rihanna: “When she walks into a room, she’s the leader. You want to be right next to her all the time, and she really makes you feel like it’s a personal experience. When we were doing the Fenty Beauty campaign, she let the girls play with the makeup and play with what looks they wanted to do on themselves. She didn’t leave it up to the makeup artist to match our skin tones.

“She’s a great mentor and big sis to have. She could just stand there and not say anything, and you would feel personally motivated just by having her in the room [laughs]. I feel like I have to go a little 10 times harder because it’s for RiRi. She’s really fire. She just has that energy without even trying.”

Her favorite pieces from the Gucci x Unskilled Worker capsule collection: “The embroidered jeans are really nice—they really were killing it with the embroidery. I think Gucci was the first brand to do that correctly. I also like the skirt. All of the paintings that Gucci chose, they make you feel an emotion. They stick with you in your mind. And that hoodie is definitely super-fire. They put the square, classic Gucci frames on the paintings—that’s the ultimate definition of a perfect collaboration.”

Her favorite meal in NYC: “Pizza! I could eat pizza anywhere in the city. One of my favorites is Prince Street Pizza. It’s expensive, but it’s worth it. There’s nothing like pizza in New York. It’s cliché, but it’s true.”

Her first Gucci piece: “I used to steal this Gucci bag from my stepmom’s wardrobe all the time. I was 10 or 11, on my fly, young Mallory Merk. I pulled up in the closet and put it in my backpack to go to school. It was a waterproof diaper bag, but I thought it was fly because it was Gucci print. All of my teachers were looking at me crazy because it was like, ‘She uses a diaper bag. Like, she thinks she’s so cool,’ [laughs] but I didn’t even care.”