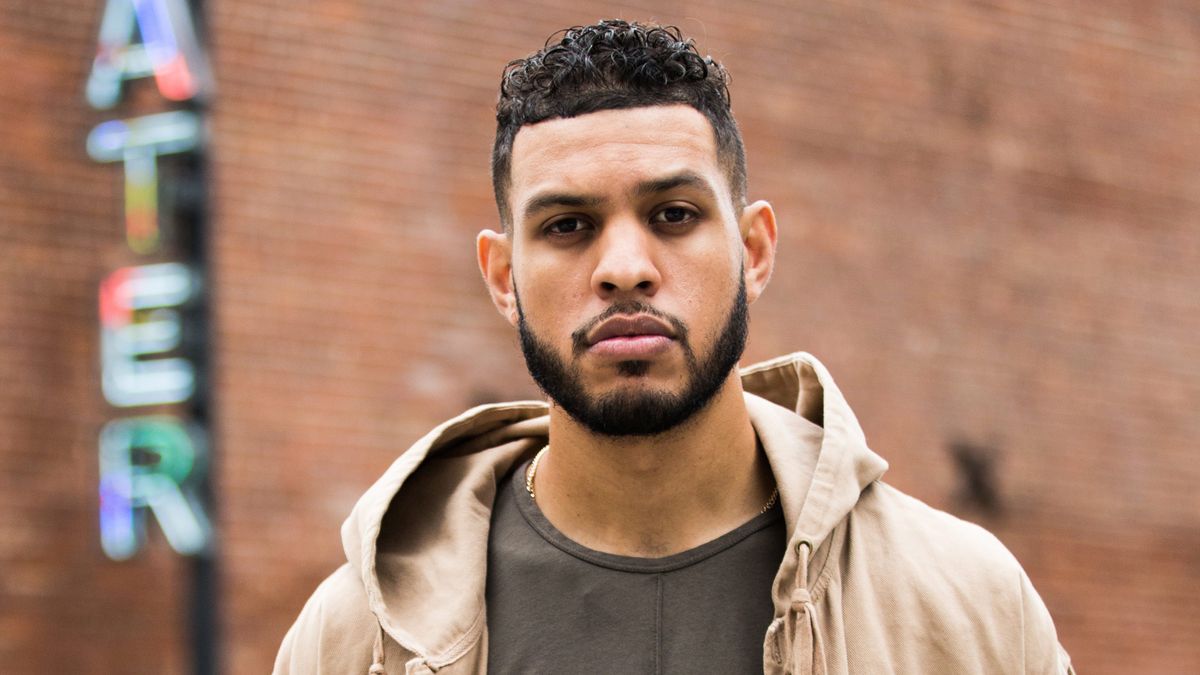 Sarunas Jackson Watched His First Insecure Sex Scene By Himself

The actor talks high school drama class, landing his Insecure role, and Instagram DMs (spoiler: he gets a lot).

What do a nanny, a stylist, and an on-duty NYPD police officer have in common? When we interviewed Sarunas Jackson at Brooklyn Bridge Park, all three approached us—eyes and smiles widening—asking for a picture with the actor. A warm and welcoming “of course” was his response to every request, so by the end of the interview, we’d learned about more than Jackson’s Northern California upbringing, personal connection to his Insecure character, Dro, and former career playing basketball overseas; we’d also learned the best photo angles of several strangers. (We took all the fan pics.)

Late last year Jackson was listening to a Breakfast Club interview with Insecure stars Issa Rae, Jay Ellis, and Yvonne Orji, when he said to himself, “I’ll be in season two.” Call it fate, a premonition, chance—whatever—but four days later, his agent called saying he had an audition for the show. “I thought I’d be someone [Issa] went on a date with, though,” Jackson says, “I didn’t think it would be to this magnitude.”

That magnitude is one that resulted in Jackson becoming the breakout star of season two. Within three episodes, Dro goes from being the married childhood friend of Molly (played by Orji) to the married childhood friend of Molly whom she’s sleeping with—after he tells her his marriage is open. Viewers of the show have questions: Is Dro really in an open marriage, or is he just saying that? Is he taking advantage of Molly’s unhappiness following a string of bad dating experiences, or is he simply giving her the attention—and sex—she craves? How, pray tell, is this tryst going to play out in the long run?

For Jackson, the drama unfolding on screen is much more than fodder for TV critics to dissect and fans to debate over brunch; it’s the type of nuanced, relatable on-screen entertainment he’s always wanted to be a part of.

Born in Philadelphia, Jackson was raised in Island Empire, Calif., the third of four kids. Growing up, he and his younger brother spent most weeknights with a babysitter while their mother worked. “She would feel bad,” he says of his mother not being home as much as she wanted to, “so she would take us to the movies every Friday. We’d go and watch one—or a lot of times two—movies. I got addicted to the whole experience, to the storytelling. [As a kid] I was like, ‘I’m not sure what that is, but I want to do it.’”

While basketball consumed much of 6'8" Jackson’s time in high school, he took theater his senior year and loved it. An observation from his teacher stuck with him. “My theater teacher, Ms. Mastroianni, she told me, ‘I know you’re going to do sports and go to school for that, but if you want to act...you could really do it.’ She put this confidence in me. You always think to yourself, ‘I could do that,’ but when somebody else says it, that’s a whole different thing.”

Ms. Mastroianni proved to be right on both fronts. Jackson bounced around to different schools playing basketball, and afterwards played professionally in Tokyo, Taiwan, Indonesia, and Hong Kong. When he decided to pursue acting, his close-knit family was supportive, though his older brother told him not to bank on one semester of high school theater catapulting him to success.

“My big brother, Marcus, was like, ‘If you’re going to take this seriously, you gotta start taking acting classes,’” Jackson says. “I was so ignorant and young at the time. I was like, ‘man, if you got it, you got it!’ But he was right. I audited a class with a guy named Ryan R. Williams, [and] I learned technical things I never knew about, like hitting your mark, making minimal movement. [In class] you’re working on your emotional switch, and learning so much. I started doing a lot of self-teaching—looking up interviews with my favorite filmmakers and actors, reading a lot about the industry. I became obsessed.”

Jackson’s early roles were of the predictable variety. “Being a basketball player, I naturally fell into doing basketball commercials,” he says. Director Paul Hunter, who happens to be a family friend of Jackson’s, cast him in a Jordan commercial opposite Chris Paul. Later, he played a small role in Spike Lee’s Chi-Raq, and a career highlight came the following year when he landed his role on Insecure. Like Dro, Jackson is black and Latino (his mother was born and raised in Panama), and he’s been in an open relationship. “I got a little emotional because it wasn’t a basketball role or something that had to do with being a thug,” Jackson says of being cast as Dro. “I was given an opportunity with a network I’ve always wanted to be on. That was on my to-do list, HBO, because I watched Sopranos with my dad when I was a kid. So [getting the part] was one of the happiest moments in my career.”

Another moment that stands is the night Dro and Molly’s first sex scene aired, promptly setting the internet ablaze for its authenticity and camera angle—the latter of which captured Jackson’s bare ass from a bird’s-eye view. “I didn’t want to watch that with anybody [laughs],” Jackson says, adding that he ended up viewing it by himself at Hunter’s house while Hunter was at dinner. “The scene happened, and I was like, ‘All right, wow—it’s out there for millions of people [to] see. My momma’s watching, so I’m going to get her call in a little bit.’ And sure enough I did, but I didn’t answer. I wasn’t ready [laughs].”

He wasn’t necessarily ready for the amount of attention he was about to get, either, though he says he’s adjusting. “That week was just crazy. My phone was blowing up. And you know, my DMs have never been flooded like this before [laughs]. It’s been overwhelming, but in a good way.”

Insecure is slated to return for season three next summer, and in the meantime, Jackson is taking meetings about other roles, awaiting the return of Atlanta and Stranger Things, and routinely updating his playlist of what he calls “vibe-y” R&B: Daniel Caesar, BOSCO, Khalid, and SZA are his current favorites. Mostly, though, he’s reflecting on the opportunities that are now coming his way. “[I have] a seat at the table with some of the cool kids,” he says. “That’s what it feels like.”

On the day of this interview and shoot, one could argue that he was one of the cool kids. We hopped on a subway as soon as we wrapped, but he stayed behind. There were four more people at the park who wanted to take pictures with him.