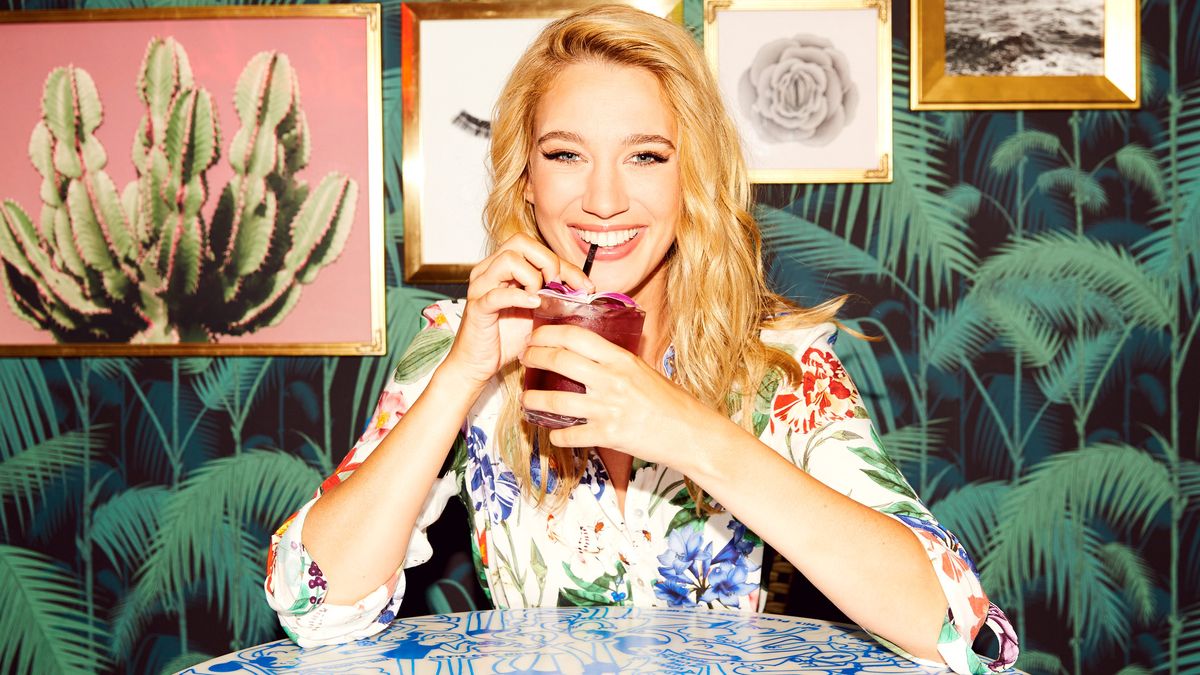 The actress spoke with us about playing the villain and why she’s hoping Anezka has a hidden tap-dancing talent.

Sure, Jane the Virgin may *technically* revolve around, well, Jane, but there’s no denying that fans often feel for her sometime-nemesis, Petra. Think about it: a controlling mom, a surprise twin, a relationship triangle involving her now-ex-husband and the woman he accidentally, artificially impregnated? She basically got the shortest end of the stick on this show and is constantly surrounded by tons and tons of drama.

But according to Yael Grobglas, who plays her, that’s part of what makes this role so fun.

After a playful photo shoot at The Hollywood Roosevelt’s The Rosy Oyster, the actress spoke with me about the CW show—which returns this Friday—revealing how hard it is to play twins, what she thought of Michael’s death, and the secret talent she really hopes is in Anezka’s future (same).

I’m personally a huge fan of Jane the Virgin. What’s it like being part of such a great show?

Petra started out as the villain, but she’s kind of transformed into someone more relatable:

“In the pilot, there wasn’t that much information about Petra. I knew she was supposed to be the villain, and I was a little hesitant about that. But once I got on the phone with Jennie Urman, the creator of our incredible show, she explained to me that Petra is going to be so multidimensional and never boring—hated one moment, loved the next. I just said, ‘Alright, sign me on.’ She’s been very true to that. I feel like Petra’s unpredictable and charming, and she’s not just a villain trying to do villainous things and rubbing her hands together. She’s really the hero of her own story, and doing what she feels like she has to do in order to survive. I don’t always agree with her decisions, but I do admire her for being so tough. She’s been through so much. Imagine!”

And there’s still just so much we don’t know about her. What do you know? Do have an idea of what her backstory is?

“I agree! I have some [of her backstory], but, for example, Anezka was a complete surprise. I didn’t know she was going to have a twin sister show up. My go-to is I’m always thinking I’m getting killed off. Every show I’m on. [laughs] So when I saw an episode where I thought Petra was running away, which is the lead into Anezka showing up, I thought she was running away. I was like, ‘No, they wouldn’t do that!’ It didn’t help that the week before I had gotten the episode, department heads were coming up [to me] going, ‘Uh, so have you read the next episode?’ I’m being like, ‘No, why? Oh my God! What are you saying?! Ahh!’ I got the episode and I thought she was running away. I’m like, ‘Here we go, here we go. Brace yourself.’ And the twin sister shows up, and I was like, ‘Wait, what?’”

With both roles, you do a lot of physical acting and facial expressions. How did that come about?

“I didn’t know that was going to be part of Petra until, if you remember in season one, when Petra and Magda accidentally kidnap Ivan. That was the first time, for some reason, physical comedy came out in Petra, and I thought it was really cool. It kind of stuck. Petra takes everything so seriously, but that’s what makes her so funny and fun. [There are] these larger-than-life types of situations that she’s thrown into and she’s just very serious, which is funny to me.”

Would you say that you’re the opposite or similar to Petra in real life?

“I’m not like her or Anezka, but I have to say, in everything I’ve ever done, little parts of me just get really enhanced and become part of the character. I don’t agree with [Petra’s] decisions most of the time, but she’s almost like a friend. I care about her. I want to see her do well. I get very proud of her when she stands on her own two feet. For example, when she learned how to take over the Marbella: She started off as a sort of trophy wife and then learned she could actually be a fantastic businesswoman. [Also], when she figured out that she could take care of her own children and worked through her postpartum depression, I was so proud of her. But, on the other hand, as an actor I wanted her to keep getting into trouble because it’s so much fun.

“After playing a character for this long, you have real feelings for them, which is I think part of why, as a cast, we took the fact that Michael’s character was going to die extremely hard. It’s like losing two people. On the one hand, we’re not going to see Brett on set every day. Obviously, he’s our friend, and we all see him anyway, but we’re not going to see him at work every day the way we used to. And two, we care about Michael. It’s really upsetting to see a character who’s so wonderful go in such a tragic way. All I could say to fans who are grieving and mourning and screaming on Twitter is ‘I hear you. I know!’ We’ve known about this for six months, and we’ve had to keep it quiet. It’s horrible. It’s like almost every time I saw Brett on set, I was just bawling my eyes out in preparation.”

What’s it like playing two characters at once? Is it challenging?

“The truth is, I never put much thought into it [before]. I always admired people who did it, but I never knew how complicated it could be. We have such an incredible cast, so I’m spoiled by the fact that I could just show up, know my lines, know what I want to do in a scene, and know that I’ll always have a wonderful partner who I can just react to. Suddenly, it’s all on me. I have no one to bounce things off of. I have to come and completely know what I am going to be doing as the other character. Sometimes the two characters are [filmed] a week apart. If I’m playing Petra right now, I have to decide that Anezka is going to touch Petra’s arm, so Petra can pull back. It was a whole learning curve, and I’m so happy I get to do it because it’s such an extra challenge, and it’s incredibly fun. And there’s magical technology at the moment, where basically, we film one character, and then if it’s on the same day, I change into the other character, come back to set, and the director can actually see both characters interacting at the same time. It blew my mind.”

Earlier this year you surprised everyone with your Hamilton rapping skills. Would you ever want to show off your musical talent in an episode for Jane the Virgin?

“I would love to! I’ve been actually trying to drop secret hints that I can tap-dance since season 2. I’m just waiting for an episode with Anezka breaking out in some Irish tap. I started dancing when I was two. I haven’t been doing it seriously since maybe I was 20, so it’s been a while. I mean, I’m not going to go on tour, but for an episode, I’m sure I could get my shit together.”