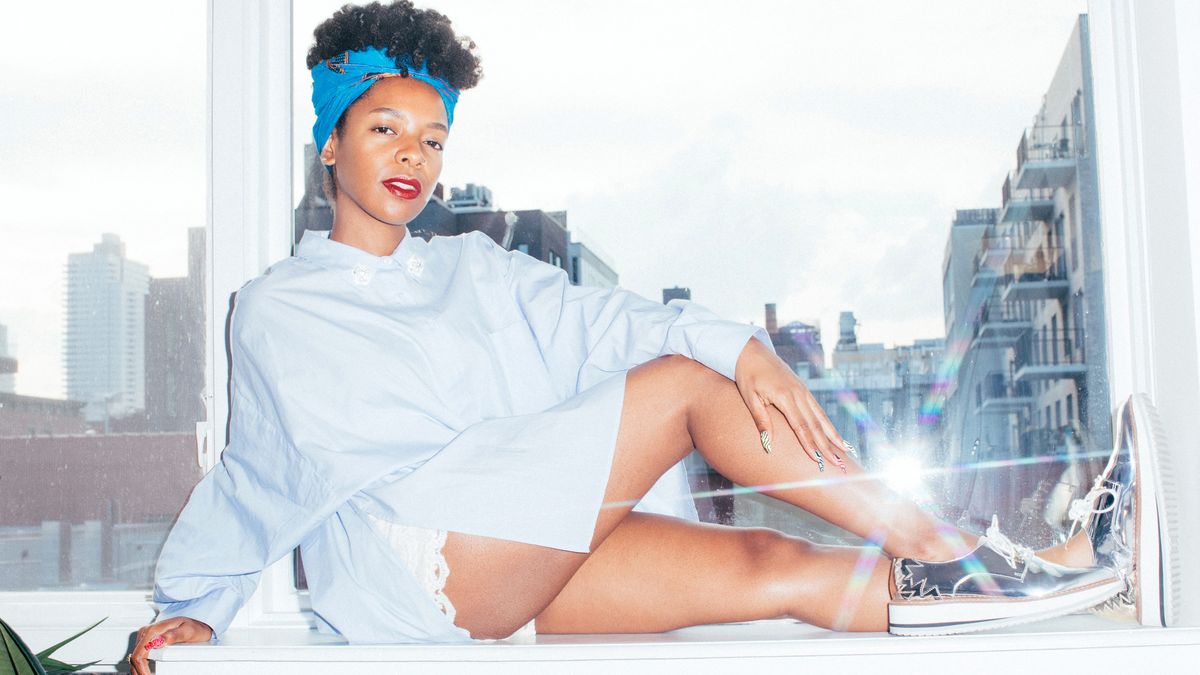 Nail artist Gracie J is the key behind the looks on summer’s beauty parlor dramedy Claws and the kind of person who makes it clear right off the bat that she is on. a. mission. “I heard Kahlana Barfield say, ‘Always have a plan A and never have a plan B,’” says Gracie, whose petite frame holds the energy and magnetism of someone twice her size. “I left salons to start pursuing my own work because I knew I was worth more.”

And in the creative field, if one’s ideas are their worth, Gracie is on the road to riches. Her Instagram is littered with a crazy range of nail art ideas—from super minimalist yet unexpected graphic shapes to the infamous 3D vagina nails she created this summer (see below). In between, you’ll find flora, fauna, Fila, and a ton of close-ups from Claws. A scroll through her feed is addictive.

Like many creatives, Gracie, who is based in NYC, also sees her work on nails as an opportunity for introspection, leading to art with stronger statements such as the Jaybo character from Jay-Z’s “The Story of O.J.” music video and, yes, the vagina nails. “As an artist, a lot of the time I use my experience and journey to depict inspiration for my chosen medium,” she says. “I am currently going through the stage in my life where I’m learning about self-love, self-care, and self-acceptance.”

We sat down with Gracie J to ask her about her beginnings, working on Claws, her push for diverse representation in beauty, and what she sees in her bright future.

How long have you done nails?

“Since I was 13. My mom is a very flashy person; she always had her nails done. If we’re going to a simple BBQ, she’ll wear a gypsy skirt and shirt with chains—she’s the flashy Haitian mom. I also went to school in Haiti for a little while when I was younger, and they would line you up and check your hygiene, including your nails. They would send you home if it wasn’t up to par. I would do my sister’s nails and my mom’s nails. I wanted to do anyone and everyone’s nail. Now nails with smiley faces are trending, but I did that when I was a teen. And did a pretty bomb job.”

How did you make it a profession?

“I’ve always known I wanted to work for myself. In high school I made wallets out of magazine paper and tape, and I would make hundreds of dollars. I’ve always been an entrepreneur. I graduated in 2012 and was working for Christina Brown when Hannan Saleh noticed my nails at an event and asked if I ever thought of doing nails for a living, and she invited me on-set. Something clicked. I felt very at home being on-set. But I didn’t yet think it was the right career for me. Later I was an executive assistant at MAC, and an invoice came across the desk: this manicurist got paid more in one day than I get paid in one week. I left, got my license, and started doing fashion week with Morgan Taylor, Gina Edwards, and Danielle Candido. From there, I started working at a posh nail salon and got my first celeb client, Kelly Osbourne. It was the worst job I’ve ever done. I was so nervous.”

Where do you get the idea for the vagina nails?

“I derive inspiration from other places, from all kinds of artists, like jewelry designers. But sometimes I just have an idea that pops in my head. Like the vagina nails. I originally created the vagina nails for my friend Faustina as an ode to the female anatomy. I built them with gel from scratch. The inspiration was from Michelangelo. I’ve been obsessed with anything related to females. I am learning about my spiritual beauty but also about my physical beauty. I believe that the woman’s body is truly an amazing phenomenon. I was inspired by my appreciation for my body as well as a counter-creation of Michaelangelo’s David. If the media can be so receptive and unbothered by the male anatomy, why shouldn’t a vagina?! It doesn’t have to equate to feminism, but loving your female anatomy and knowing it.”

And you got a really strong response.

“We knew it would go viral. It did, and then another artist replicated it and got credit. But I wish I had been given credit. I wish more artists respected the medium. My medium is a super tiny canvas that happens to be a nail, and I want people to take me seriously as a nail artist and to recognize diversity matters. In an industry where ethnic women spend tons of money on beauty, we’re not being represented. A big part of nail culture is black culture. Our culture is being put on the forefront, but we’re not being pulled up to the forefront with it. That’s very important to me.”

“Niecy Nash is a black woman leading a TNT series and the lead of hair, makeup, nails, and the showrunner are all black. The women in the studio are ethnic women as well. Supporting actresses that are black. In the salon, that Nisi owns, she’s a black woman owning a nail salon, and a lot of the customers that come to get their nails done are black women. We’ve been setting these trends for a long time and not getting credit. All these people are making their mark, and to be part of something so magical has just been an amazing experience. Behind every look [I create], there is an emotion, there is an action, and there is a story. Then comes the execution and the mass-production process. It’s intense, especially when you have to be meticulous working with such tiny canvases.”

“My goal as a nail artist is to make nail art more mainstream and as on-the-forefront as other specialties in the fashion and beauty industry. I am working on my little passion project currently being introduced as Nails at First Sight, which will serve to showcase nail art up front. Can’t say too much, you’ll just have to keep up with The Editorial Nail and see!”

Lastly, we got to know, what is this amazing lipstick?

“I always wear NYX Cosmetics Liquid Suede Cherry Skies and The Lip Bar Lipstick in Purple Rain, which is this bright purple.”

More From the series Nails

Calling It: These Nail Trends Will Be All Over Your Feed Come Fall

Need a Manicure? This Robot Will Lend You a Hand