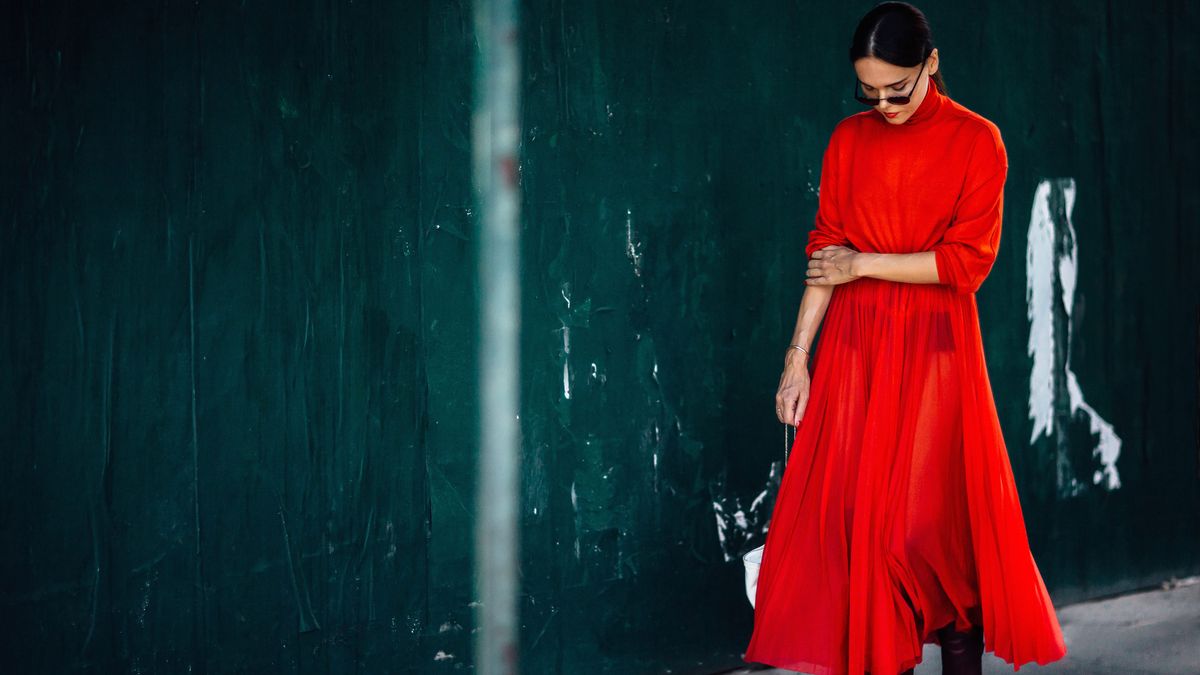 If you’re only *just* shopping for fall, we have some bad news: You may just be a little bit behind. That isn’t to say you shouldn’t still be stocking up on boots, deconstructed shirts, and monochrome red outfits. (We’ve actually got a couple options in our open tabs right now.) But if you’re looking to stand out with pieces that no one has, chances are they’re not in your online cart because they just walked down the runway.

This month, designers are displaying their SS18 collections, and the time to buy the trends we’re seeing is now–that is, if you want to have them before everyone else does. And yes, we know “SS” stands for Spring/Summer and summer is ending (don’t rub it in, okay!), but we like to be ahead. Most of the trends we’re seeing are also pretty easily incorporated into a fall wardrobe, so you can wear them sooner rather than later and well into spring too.

Not all brands offer see-now, buy-now collections, but luckily most trends don’t start in a vacuum; they’ve either evolved over a few seasons or have their roots in nostalgia. That’s how we’ve wound up with bucket hats as non-ironic accessories and sweaters tied around our chests instead of worn across our shoulders. Based on what we saw on the NYFW runway, here are a couple things we’re looking to invest in now. Trust us, if you follow suit, by the time everyone catches on you’ll already be on to the next thing.

The SS18 runway proved that there is apparently never not a time to wear a bucket hat. It looks good with everything, from a long plaid gown to a khaki skirt and striped button-up. If you don’t already have one in storage from middle school, consider these more lux versions instead.

A pair of cargo pants

We know…we know! But it’s totally going to be a thing. The cargo pants of the past gave us nightmares while simultaneously making us ask: Who would ever need so many pockets? Fashion, though, has been hell-bent on making them happen. This season we think they may have actually done it. Forget all that you think you know about this style—the new cargo is oversized, colorful, and comes in surprising fabrics like velvet and silk.

Sweaters—to tie in a knot around your chest

This season, sweaters were worn in a way we haven’t quite seen before. Instead of having them, you know, on a torso or tied around the neck or waist, they were being styled with sleeves tied into a knot around the chest, one arm coming up under an armpit, while the other came slung over a shoulder, like a hug.

Anything in gen-Z yellow...

Naturally, millennial pink had to come to an end. But who would have thought yellow of all colors would be its replacement? The color has a tendency to be blindingly bright, but the newest generation of celebrities found a way to make it work. The key to rocking the color is wearing it in all its different shades. Go bright and all out, or more subdued and relaxed.

...or in a very bright shade of orange

Orange is another color that’s traditionally...challenging. It’s not exactly easy to wear without also resembling a traffic cone. But if Cardi B can rock a light orange puffer jacket and look incredible while doing it, we want to at least try.

Whether or not it’s raining–you’ll want waterproof outerwear

“Leave it to RiRi” should be the unofficial slogan for NYFW. She started the week by releasing 40 shades of foundation with Fenty Beauty, and ended it with man-made pink glitter mountains and a motocross spectacle. When she says jump, fashion asks how high, so naturally everyone will be wearing some iteration of Fenty sportswear in the coming months. Waterproof outerwear seemed to be a key piece for the collection and a favorite amongst designers like Raf Simons at Calvin Klein as well.

A thong bodysuit to show off your hips

This may not be the most practical, but it’s an alternative way to show some skin for a night out. If you really want to be ahead of the curve and extra on-brand, pair it with your brand-new low-cut oversized cargo pants and bucket hat.

From Monse to Fenty to KITH, sportswear is something everyone can get behind. Unlike taking a gym class or joining a sports team, no athleticism is required! Go ahead and buy that varsity bomber or track pant. Shopping is like a marathon anyway, isn’t it?

Whenever we think of bows, we can’t help but think of Blair Waldorf. Even if Gossip Girl holds a special place in our hearts forever, it’s tough to say if the show’s outfits necessarily hold up years later. Leave it to Joseph Font of Delpozo to make us want to wear huge Blair-esque bows in our hair again. If you’re not brave enough to wear one on your head, try it on a blouse or sandal instead.

And some blood red (literally)

Raf Simons’ blood-splattered trench for Calvin Klein was one of the most iconic moments of NYFW. The color red is already everywhere this season, but we have a feeling the interpretation is about to get more literal. Try stocking up in even darker shades than you’re used to. And we don’t know about you, but we’re definitely going to go ahead and buy an Alison Lou blood-drop stud for our ears.