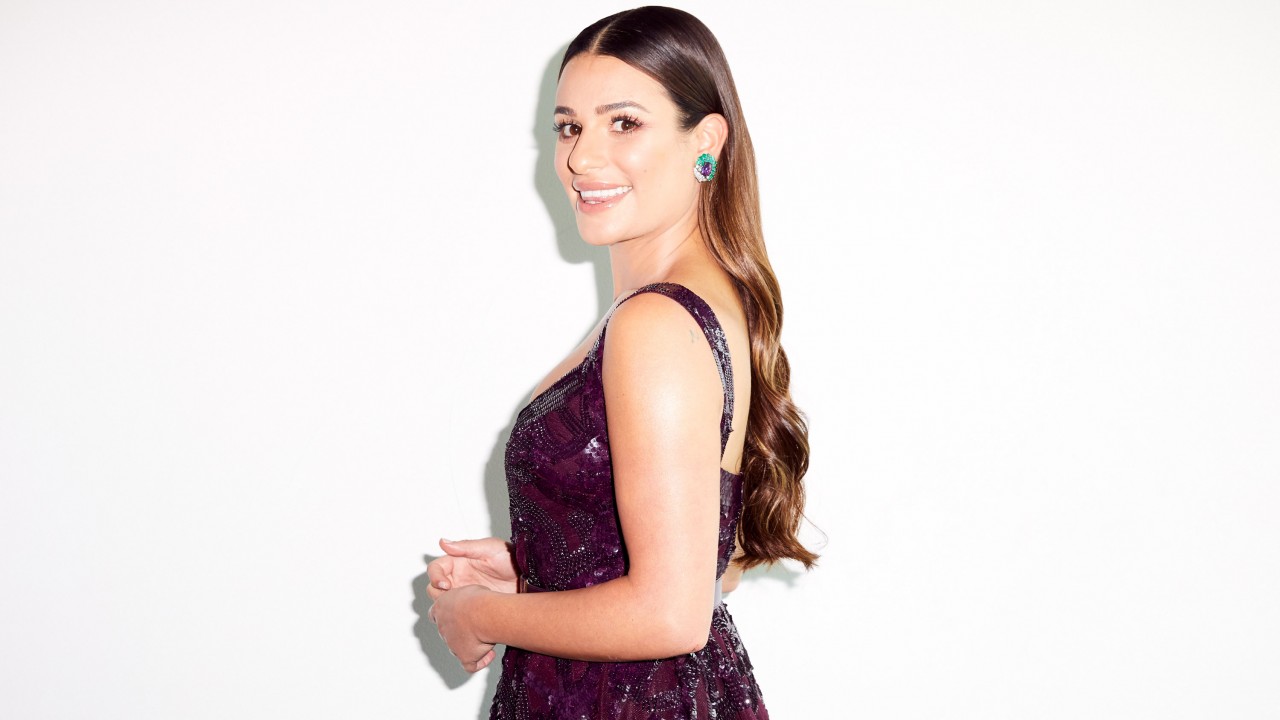 The One Thing Lea Michele Always Keeps Stocked in Her Bag

We joined the actress and singer as she prepped for the Emmys red carpet.

“If Brad were here, we would be misbehaving. It would be bad,” laughs actress and 2017 Emmy Awards presenter Lea Michele in the midst of her pre-show beauty prep. She’s referencing her stylist, Brad Goreski, who is busy co-hosting E!’s Fashion Police, leaving the rest of the team—including Sarah Potempa for hair and Mélanie Inglessis on makeup—to prepare Michele at his L.A. studio for television’s most glamorous evening. Even without Goreski present, there’s plenty of laughter and champagne to go around, as the lighthearted crew shares their latest obsession with metallic eyeshadow and the industry secret for achieving perfect old-Hollywood finger waves.

With just moments to spare before a car whisked her away for the night, we learned all the details about Michele’s stunning Elie Saab gown (she’s been loyal to the designer for almost four years now), her favorite place in L.A. to book an appointment before the big night, as well as the most important thing she’ll be carrying in her Tyler Ellis bag.

“My facialist, Shani Darden, who is the best in this city, got me ready for today. I got a little massage yesterday just to relax; I like going to Shape House, which is the infrared saunas, just for detox. Normally I don’t do this, but I wasn’t feeling well, so I did a little juice cleanse as well, just to cleanse my system and feel good.”

“[The makeup inspiration is] just very clean, simple skin. We were going for a romantic look. We didn’t want to do too much because the dress is purple, and then there’s earrings, and I knew I wanted my hair down. So, we wanted to keep the makeup more on the simple side, [and] focus more on the eye.”

“We’re playing off of a little purple in the dress, but more so using some golds and metallics [featuring CHANEL Illusion D’Ombre #RougeBrûlé], which I really like. Then Melanie does the best glowy, beautiful, natural skin in this town.”

“This morning I started by drinking a lot of coffee. That’s super important for a day like today where you need a lot of energy. I had a light breakfast, because you want to not feel super full, especially in a dress like this, which is quite tight. So definitely eat something light and healthy, [and] relax. I took a shower. I exfoliated and shaved all my hair off my body. I start from my toe and I go all the way up. I’m Italian and Sephardic, so it’s quite the process. The shower is, I think, the longest of it all.”

“[The hair inspiration is] kind of this old-Hollywood classic glamour. We found this beautiful photo of Jessica Chastain that I loved, and it was just simple and shiny and polished.”

Sarah Potempa (founder of BeachWaver hot tools, above): “Lea looks so good with a clean front, so the idea was finding something that had a little more glam in the back. It’s a beautiful wave and really polished, but it also has a little more fashion-chic front. I feel like with this center part, it really shows off her makeup, but from over the shoulder or the side, you get that hint of old-Hollywood glamour. It’s one-and-a-quarter-inch curler. It’s a little bit bigger. A one-inch traditionally would be a tighter wave, but we wanted it to be a little more modern, so it’s a bigger iron. It just gives you a really shiny, polished finish.”

Sarah Potempa: “The most important thing is—this is my pro tip that girls at home never really know how to do—but take a flexible hairspray—mine is Aveda’s Air Control—something that says 'super flexible styling spray.' I spray it on the brush. It’s a nylon boar bristle brush, and that’s how I’m going to get the perfect wave. I spray it on the brush, and it takes it from beach waves to glam waves. So, when you’re styling it, you’re actually brushing all of those waves together and then it evenly distributes the hairspray.”

“Melanie and Sarah were the first people I ever worked with almost ten years ago now. Sarah and I have known each other since 2005. We’ve been friends. For the first-ever event that I got assigned to do for Glee, they assigned these two ladies to work with me. So, they really know how I like to do it these days. They know my vibe.”

“Chi, who does my nails—she’s the best—we do gel nails. I need the gels, because usually when she does my nails, even if it’s for a big award show, I have work at 6am tomorrow morning. I’m working all week, and then I have another event on Saturday in New York that I can’t see her for, so we want it to look great today, but I also use the gels to keep them good. Usually a gel isn’t the best thing for the health of your nails, but she takes great care of them.”

“[The nail color is] OPI Don’t Take Layaway. I usually wear this color all the time. We were thinking of doing a darker nail, but the jewelry is purple, the rings are purple, the dress is purple. Personally, I like a clean nail. I don’t do anything other than black and nude, sometimes red or gold, for my personal life, but for award shows it’s most likely just nude.”

“I like to have good snacks, I like to have a little champagne, I like to have chill music, because I really think that the vibe you have going into it leads up for a better day. It really does make a difference, because you need energy, you know? It’s a long day. I’m not presenting until 7:00 probably, and it’s not even 2:00 right now.”

“For a big award show, we’ll do a fitting three to four weeks prior. For this dress, we did three fittings. The first fitting, we picked the outfit. The second, we checked fit. We did a fitting the day before where we went through the final touches and whatnot. That’s what takes the most work.”

“The minute I picked the dress, I sent it to Melanie and Sarah. I start sending them glam inspiration picks. I like to get a lot done in advance and feel super prepared—even just knowing what our look is going to be, and everything that goes into the day, so that when it comes time, you can just relax and we don’t have to worry about anything. The point of getting everything done in advance is so that you can just have a chill day where it feels like a normal day and night, not like where you’re feeling like you have to be rushing or doing a hundred things to overwhelm you for your day.”

“Usually, I don’t let these events rule my mind or body. I don’t let it alter me. I find dresses that fit how I look. I don’t try to look a certain way to try to fit any dress or any event.”

“I always get nervous [before going onstage]. I feel like the day I don’t get nervous is the day I should probably quit, because I think it says something. When I perform onstage—these guys have done all my concerts with me—I get so nervous. Barbra Streisand, she’s so scared. Christina Aguilera—they get so nervous, and these are the best performers. I think that that’s a good sign. So, of course I have nerves and I want to do a good job, but I make it so that I still enjoy myself.”

“Not so much [any rituals] before [I go onstage], but I will have a large drink when I’m done. Tonight I’ll probably have some champagne or a large vodka [laughs].

“[In my bag] tonight it’s just some gum, my ID, my phone, anything Melanie has for me to get touched up, and I threw some chocolate in there because that’s a good thing to have. The Emmys are a unique show because you’re in an auditorium. No booze, no food. Golden Globes you’re at a table, so there’s food, there’s drinks. This one is a long show. You’re also sitting in between people a lot of the time—it’s not like you can easily get up and walk around—so you’re kind of stuck. You want to make sure that you have some things that you can pick on, so I have some gum and chocolate in my bag.”

“[It’s an] Elie Saab dress, Lorraine Schwartz jewelry, and the shoes are Stuart Weitzman. [And a] Tyler Ellis bag. I’ve worn Elie Saab now for almost every large red carpet. I wore him to the Oscars, to amfAR. I just think his dresses work so well on me. They fit my body. It’s a great pick. I wore Oscar de la Renta for almost every award show for almost three years, and then I wore Zac [Posen] for a while, and now I’m in an Elie Saab phase. I think it’s also as you get older, your body changes. You kind of lean towards the style that works best for you and how you are in whatever stage of your life.”

“I definitely think it’s important to look good, but you have to feel good, because if you don’t feel good, it ruins your whole night. This dress in particular is kind of on the tighter side, which I don't normally gravitate towards, but it was just too pretty. It’s also very heavy. [But] it was just so great. Luckily there are also some adjustable hooks, so as the night goes on, if I need to exhale a little bit, I can fix it. I love this silhouette where it’s tighter on the top. I love an empire waist. It’s great for exhaling.”