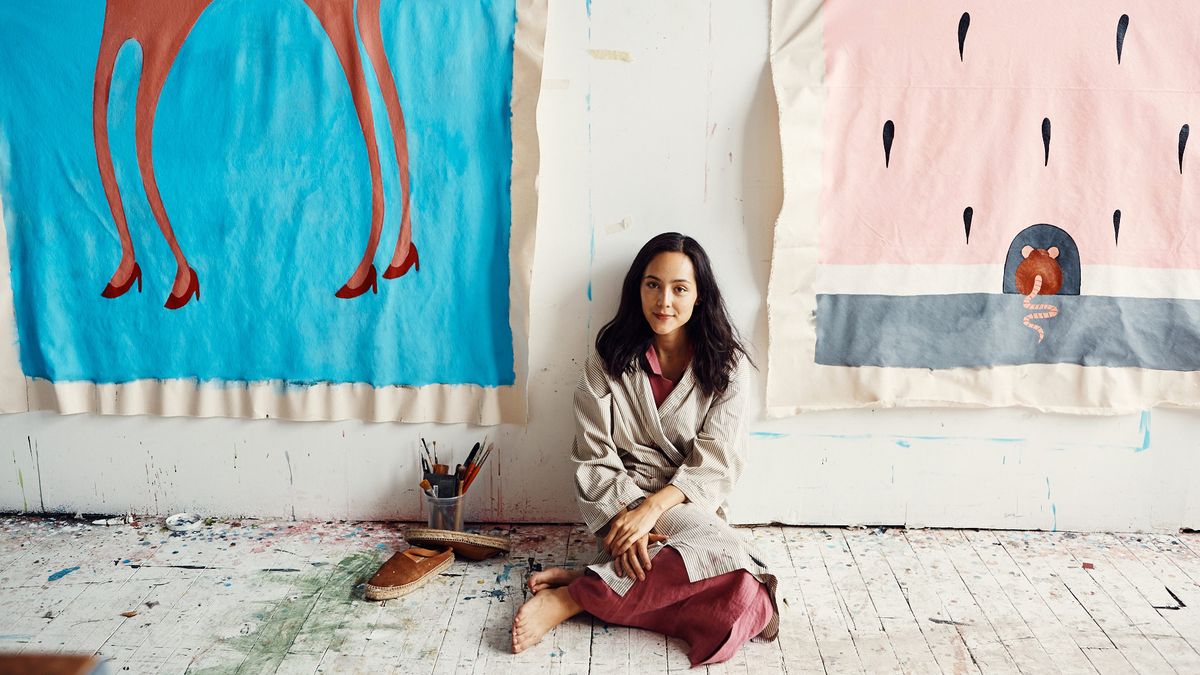 If you want to gauge the mindset of the average twentysomething woman in 2017, take a quick look at Camilla Engstrom’s Instagram. Colorful, witty, and irreverent, the Swedish-born and Brooklyn-based artist’s paintings offer a humorous take on the issues I and my peers discuss ad nauseam on a near daily basis. From body shaming to sex positivity, nothing is off-limits or too risqué to post—a dick nestled between a hot dog bun or a kickline of unshaven legs wearing high heels included. It’s as if the inside jokes between you and your closest girlfriends have suddenly come to life in full technicolor.

Being a twentysomething woman myself, I decided to visit the artist’s Gowanus studio to learn more about the origin of Husa—Engstrom’s not-quite millennial pink character who often eschews both pants and a bra—and why Engstrom advocates chasing the things in life that make you happy, no matter how crazy it may seem to your inner circle.

“I definitely have my moments, like, crying in the shower wondering ‘What am I doing?’” says the fashion school dropout in one of her many moments of casual transparency. “But at least I know that no matter what happens I can always move in with my parents again.” To be frank, I’ve never heard someone discuss moving home with her airy indifference, but by the end of our conversation, it no longer seems like a byproduct of failure, but rather a practical, temporary solution. Such is the spell of Engstrom’s confidence in both herself and her work. “I think so many women, especially me, compare [themselves] to other people and try to fit in. I think with social media, it makes things ten times worse.” As someone who has often used my peers’ trajectory as the yardstick of my own success, this resonates deeply, and I’m curious to know how she avoids feeling this way.

After leaving FIT to pursue art full-time, Engstrom soon learned a trick to prevent the jealousy spiral so many people experience in this age of social media frenzy. “I went on Instagram and wrote down everyone I followed of whom I was extremely jealous. I looked at each and was like, ‘Why am I jealous of this person?’ Alexa Chung was one of them. Then I combined all of them to see what it was. I was like, ‘They’re creative, but they’re also a business.’ [So], I tried to turn that sick, negative feeling into something good. I left [my job] as a freelance fashion assistant. I didn’t have any money—I just knew that I didn’t want to be miserable anymore. I was broke as hell, but it was worth it.”

Looking around at her sun-drenched studio, I spy several notebooks and markers among the various half-finished paintings. “I doodle a lot,” she says when I mention the stacks. “Then I take whatever I think is good and the rest I just put in a box that says ‘studio sale’ [laughs]. I get so dramatic when I don’t feel inspired.” I ask how she deals with a creative rut. “I kind of let myself have a breakdown, and I usually blame my boyfriend for not going on that one vacation with me that I wanted to go to. [laughs] It’s always something. Then I force myself to draw and draw and draw, because drawing is the easy thing for me, and usually my mind stops thinking and something clicks in my brain.”

The ambitious artist (she sets a goal of one new piece per day, even if it’s a doodle) has slowly built a loyal following of fans, many of whom share her frustration with the fashion industry. Husa, her most notable recurring character, is a direct response to that feeling. “When I quit fashion I was like, ‘I still want to draw, but I don’t want to draw that skinny fashion figure.’ So, I was at home on the floor, drawing, and then I just made her rounder and rounder, [laughs] and then finally I was like, ‘She’s going to have a face, and she’s going to smile. She’s going to be happy and funny.’ Fashion drawings, it’s just about grumpy, skinny figures.”

This thread of feminism and female empowerment is found throughout the majority of Engstrom’s work, labels she gladly accepts. “Women can see that it’s okay to draw something dark or funny [with] cute colors. Sometimes cute can sound so negative, because it’s feminine [and] maybe girly. I want to change that.” She views painting and drawing as a therapeutic outlet for some of the negative experiences she’s had in relationships, and hopes that women going through similar things will relate. “I know I can do so much more, and I’m still trying to figure out how I can help young women feel more confident. I’m definitely [creating] for me, but I’m also doing it for the young girl that I was ten years ago, who was so confused [and] totally mistreated by men constantly. I feel like if I could just make a painting or a drawing that someone who is going through a rough experience can relate to, then I’m happy.”