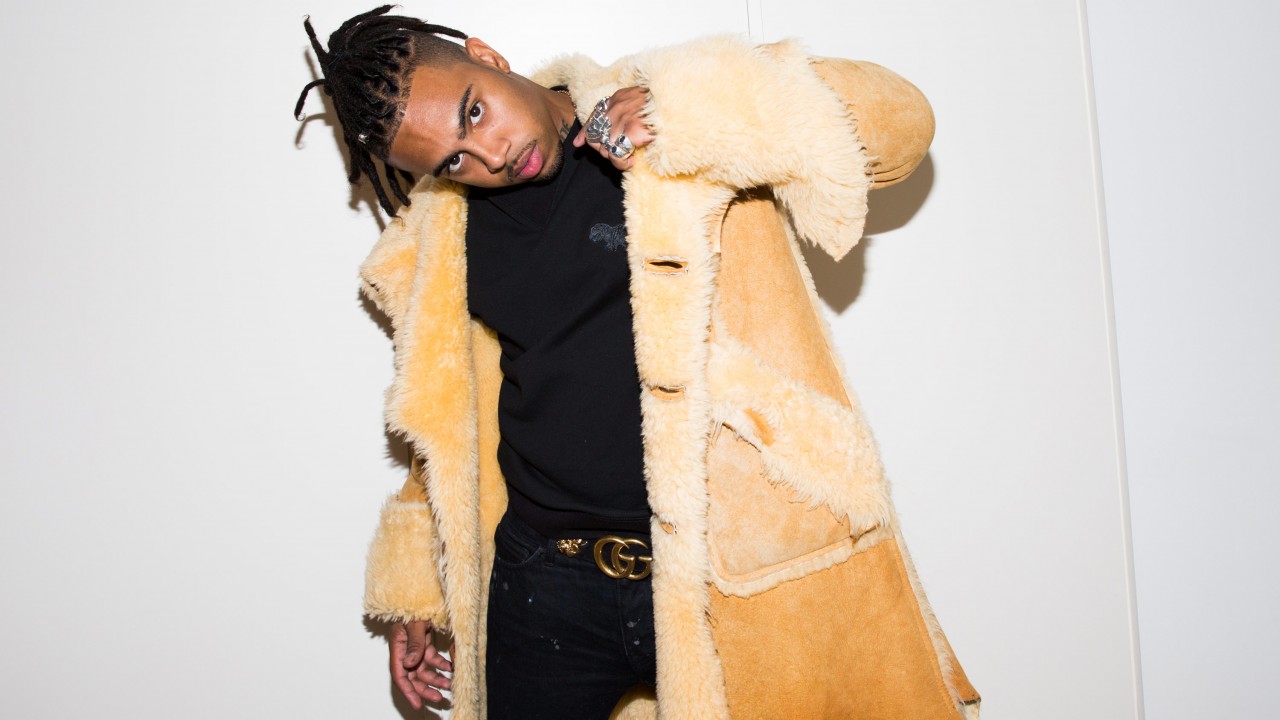 The rapper chatted to us about his Chicago roots and Tupac as he prepped for the show.

We’re going to go ahead and state the obvious here: Vic Mensa is having a really big year. Okay, so technically, since 2013, the Roc Nation-signed rapper has toured with the likes of J.Cole, Wale, and Danny Brown, and was featured on Kanye’s tracks “U Mad” and “Wolves” (he was also nominated for a Grammy as a result of co-writing “All Day”), but it’s really in the past year that we’ve started to see Mensa quite literally everywhere. Whether he’s been presenting his debut album, The Autobiography, delivering an insane freestyle on Hot97 (where he also asked Funkmaster Flex to clarify his theory on Tupac’s death—more on that below), or collaborating with the best of the best artists (hi, Pusha T and Pharrell) the rapper has been in our face. And more than just about music, speaking up on important topics like the alarming frequency with which rappers are assaulting and being violent towards women and the violence in his hometown of Chicago. Kudos.

Yesterday we hung out with Mensa as he got ready for Coach’s SS18 NYFW show. Between trying on outfits, the rapper talked about his soon-to-be-released jacket brand, 93 Punks, what it is about Chicago that breeds such successful people, and what he has in store for us this year.

“I keep losing a bunch of my good rings, but this [large skull ring] is a Wes Lang collaboration with a store called The Great Frog. The rest of the [rings] are from The Great Frog.”

“This shit [my hair] takes a lot of work [laughs]. I can’t even give no tips. I don’t even have any. I’m just in it. You gotta keep doing it every fucking day—that’s the tip. I have to constantly tend to it. I wish it would just grow off in a direction, you know [laughs]. I feel like, not as much as that, but...Basquiat had his shit jumping off the head and that was the [guy] that I originally was like, ‘Damn, I like his hair,’ you know?”

“[I’m wearing a] crazy shearling jacket—beautiful sleeves and kind of like a torn shape. I’m trying to decide whether to wear white vintage everything underneath, or black, newer clothes.”

“Usually I just kind of get my look together, get my fresh together. I don’t do too much special prepping before a show.”

“I like to say I’m first revolutionary with style.”

“Chicago is the backbone of my style and my music—[it’s] such a diverse but segregated city. I got major style inspo and life force from growing up a skateboarder in Chicago—that’s how I got into hip-hop, and that’s how I got into rock and punk. The streets of Chicago were pretty much a completely different world from that. That’s also very influential to my music because that’s mainly the shit I talk about—it’s a mix between this street art scene and then the real hood.”

“I made jackets for myself with my friend Conrad. I sourced really dope, vintage leathers and found things to put on them—patches and paint, studs, and things like that. People would always ask me where I got them and so I just decided to make a line of them. I might as well just make something because people are really getting away with murder ripping the culture right now. I might as well keep it real.”

“Chicago breeds superstars because they’re not focused on superstardom from day one. I think that’s partially an influence because you don’t grow up seeing musicians and actors hopping out of limos or going to clubs; it’s not possible in Chicago. With that disconnection from mainstream Hollywood and New York, comes a very realistic and unique character to the city. Also, it’s very polarizing—you can be in a mansion and be five blocks from the projects. I think that kind of brazen mini quality is plain to see [and] I think that’s part of the reason why we get such socially conscious artists from Chicago because it’s easier to see what’s wrong. It’s not very veiled.”

“My favorite song on The Autobiography is called ‘Homewrecker.’ That’s a song just about this toxic relationship I was in, and it’s very visual and very graphic describing this scene of her breaking into my house and going batshit crazy—it made for a good song [laughs]. I can’t even be mad.”

“Speaking of Funk Flex about Tupac, I came to respect his opinion because I had never really heard the details of when he was supposedly shitting on Pac, I just would see the headline and knew that Funk Flex didn’t like Tupac, so that’s why I put a line about it in my freestyle. And then he sat with me, and he broke it down, what he believes happened in detail [the night of Tupac’s death]. Funk Flex was around—I wasn’t present at the time of Tupac’s shooting so I have to respect his opinion and his position on the accounts of events that he was present for.”

“I, overall, am 100% the biggest Tupac fan, and nothing can be taken from that. His driving force was that Gemini juxtaposition of like a very vulnerable, emotional person and also like a volatile rebel. Tupac did so much more in his short life than the majority of people do in their long lives, so it is what it is.”

“[This year] you can expect to see a really, really dope tour. I’m going to be on tour with my favorite artist, I can’t say who it is yet. Then I’ll be on my own tour for The Autobiography. And dope videos, the 93 Punks jacket collection. I have my foundation, Save Money Save Lives—it’s right in the final stages of its incorporation. For anybody that happens to be reading this, we’ll need funding and donations to connect kids from Chicago—for community projects [there]. I have a project called Universe to connect young writers, rappers, producers from Chicago with kids from the Native American reservations and do delegations, like foreign exchange, for young artists. A lot of philanthropic shit this year.”