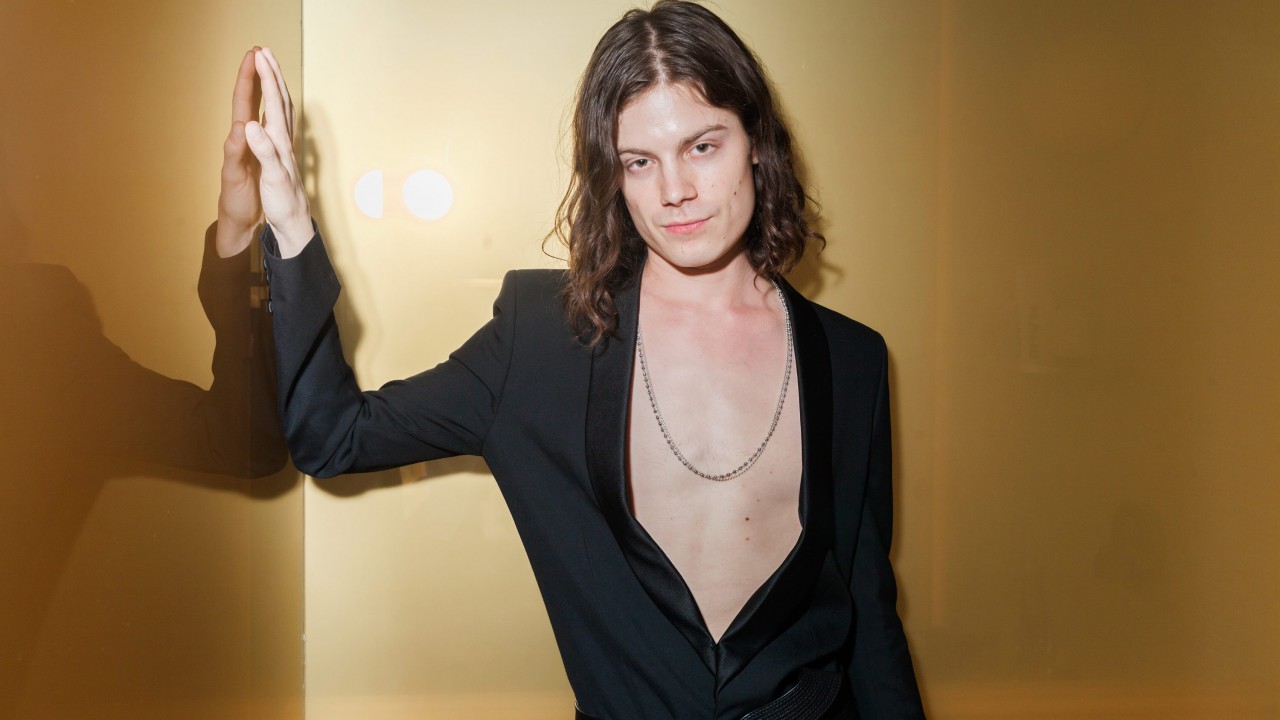 How Børns Gets Ready for a Fashion Week Party

It involves push-ups and tequila.

There are several ways to garner our attention and admiration, but here’s one surefire route: Write and record the intoxicating platinum single “Electric Love,” wear a bright red Alessandro Michele Gucci blouse to perform on The Tonight Show Starring Jimmy Fallon, and be a champion for crop tops, tousled wavy hair, and nail polish for all genders. This is how we (along with the rest of the music- and fashion-enthused world) came to know Børns, the 25-year-old singer and songwriter whose debut album, Dopamine, was released to critical acclaim in 2015. He’s since hit the stage at Coachella, gone to work on his sophomore album—due out early next year—and become a style luminary of sorts, attending fashion shows in New York and Milan, and being named an ambassador for CFDA Men’s New York Fashion Week.

Before embarking on a tour that will take him to Toronto, Paris and Brussels, among other cities, Børns was in New York to perform at the fifth annual Business of Fashion 500 gala. We snapped some photos of him—and his embellished pussy-bow blouse Gucci suit, of course—as he got ready for the show at the Public Hotel. Of his stylist, Kat Typaldos, who picked the look, he says, “She’s always pushing me to kind of take things to the next level and maybe wear something that I wouldn’t think to wear.”

The Business of Fashion party raged on to the wee hours of the morning, with a crowd that included Jared Leto, Karlie Kloss, Virgil Abloh and Halima Aden. Before all that revelry, though, here’s what went down in Børns’ hotel room.

On developing his sense of style:
“I’ve always been interested in fashion and conscious of how I look, even at a young age. It kind of started out with always being in a different character and dressing up in different costumes, even just for school. I had phases of different characters that I was into, and they weren’t elaborate costumes, but they just kind of changed my personality a little bit, which was fun for me. I tapped into that headspace when I started performing and I feel like whatever I’m wearing definitely helps my performance—helps me get into a vibe and sing differently and act and move differently.”

On the characters he channeled growing up:
“I’m going to embarrass myself, but I had a Robin Hood phase—kind of like an old English look with the tights and the little man skirt and a quiver for your arrows. I didn’t bring arrows to school, though. And I was really into Zorro for a while, like the all-black look.”

On his style icons:
“I always look up to Bowie and Prince. Those are my go-to icons. They influenced so much of fashion—the fashion that you see today, even. And all of the transformations that Bowie did with his fashion and music is constantly inspiring to me.”

On the appeal of Alessandro Michele’s Gucci:
“[Alessandro] is so good at taking really old influences and making them very contemporary and new. Even if you see his Instagram page, he’s constantly posting Renaissance paintings and antiques and certain motifs and that era. And I find it really interesting, the history of where art and music and fashion comes from. I have a lot of older influences from a musical standpoint—older composers—but always trying to make those sound new and fresh. I think Alessandro has a very good eye for doing that.”

On working with stylist Kat Typaldos: “We worked on the ‘Electric Love’ video together and we hit it off because we had a lot of the same artistic influences. We’re really close and she’s always finding amazing pieces for my projects. On all the videos and photo shoots for this whole next album I’ve worked really closely with her. She brings a lot to the table. I definitely owe her a lot.”

On maintaining his long, wavy hair.
“I really don’t like using anything with chemicals in it or anything unnatural. I kind of just let my hair do its thing because it’s so unruly and hard to actually tame. It’s kind of different every day—sometimes it’s a lot curlier than other times. If I do just need to really cleanse it, if you put diluted apple cider vinegar in your hair, it just really cleanses it, and that’s when my hair is the curliest.”

What’s currently on his playlist:
“Everything Frank Ocean is surprising us with recently is always a pleasure. Charlotte Gainsbourg just put out a new song; it’s nice to hear from her again because I love all of her past records. Whenever I’m cooking back at my loft in L.A., I put on exotica records like this composer named Les Baxter. He’s not around anymore, but he made these really beautiful lush exotica records that are nice for background music.”

On his cooking hobby:
“I cook a lot whenever I have the chance. I love to cook. Now that it’s getting a little bit cooler I’ve been making curries a lot. I love making curries from scratch. It’s kind of an experiment. I made this curry the other night and kind of left it slow-cooking and went out to get a bottle of wine. It was so good.”

His approach to Instagram:
“To be honest I just kind of post. I don’t really think too much about it. I feel like I kind of go in waves of different colors and schemes, and they all kind of show up just naturally. But I don’t really put too much thought into it—I like it to be kind of natural. A$AP Rocky has a really tight page, and I follow National Geographic because they always have really amazing pictures of exotic animals.”

On his pre-show ritual:
“There are a few top secret things I do, but what I can disclose [is that] I like to occasionally have a little tequila cocktail, which is just tequila on the rocks for me, and maybe do a few push-ups. I always like to pound on my chest because I think it opens up the solar plexus meridian. And just make sure I’m breathing and in the moment.”