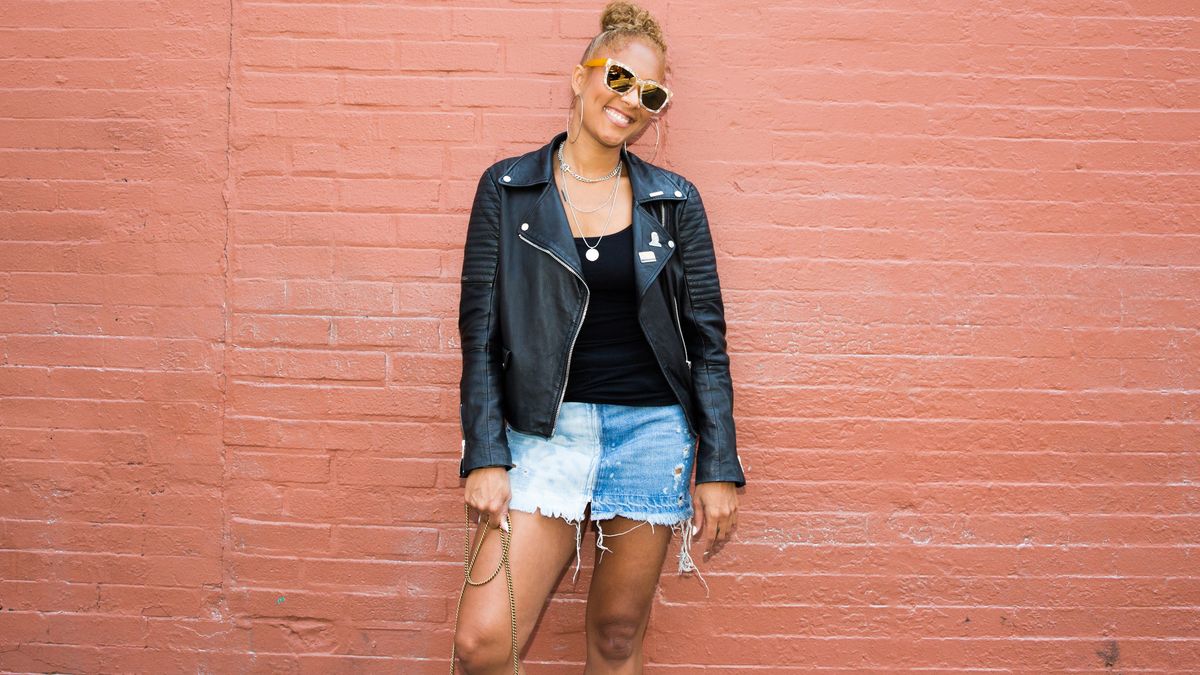 One-on-one with an artist who *literally* does it all.

Preparing for an interview can require anything from listening to an artist’s latest album, watching an actor’s newest series, viewing a comedian’s stand-up routines, browsing through a DJ’s playlist, or watching a host’s reel. In the case of Amanda Seales, it required all of the above.

“I’m West Indian—it’s in our culture!” Seales said when we admitted that seeing her body of work made us feel slightly unaccomplished. Her CV—which we carefully fact-checked while chatting with the multi-hyphenate artist and performer at the Soho Grand in NYC—includes a recurring role on Nickelodeon’s ’90s sitcom My Brother and Me; a run as MTV VJ Amanda the Diva; touring as one-half of R&B duo Floetry; performing stand-up comedy; writing, producing, and starring in several web series; talking politics and pop culture on TV and radio; and most recently, playing Tiffany on HBO’s Insecure, known to viewers as the bougie married girl among the show’s group of friends. Somewhere along the way, Seales carved out time to earn a master’s in African American studies from Columbia University. Coincidentally, it was that experience that forged her interest in playing Tiffany.

“I originally went in for Tasha, but, as we can all see, I am not a Tasha body type,” Seals says, referencing the distinctly curvy bank teller played by Dominique Perry. “I don’t have the parts, and I knew that, so when I went in I said that to the casting director.” In turn, the casting director suggested Tiffany, a 30-something Ivy League grad. “I was like, ‘Oh, you mean my life? Yeah, that would probably be better.’” Four auditions later, the part was hers. And while Seales has booked a lot of gigs in her career, this one was particularly significant.

“Insecure was of course on everybody’s lips, especially [among] black women because we rarely get to audition for anything that’s legit,” Seales says, adding that the fact that the show was created by a black woman, Issa Rae, made it even more appealing. “I had a web series called Get Your Life that was on Issa’s platform, so I knew [her], and we had been moving in the same circles for years. So it was like, ‘Great—this is an opportunity to be a part of something that she’s accomplished that looks like it’s going to be really dope.’” Once Seales landed the role, it also became an opportunity to portray a character whose similarities to her end at being black and educated.

“I love playing someone that’s completely opposite of me,” she says. “Anybody who knows me is like, ‘Wow, this is not you,’ so that’s really fun. And [also] getting to see a character grow. A lot of times you book a show and it lasts one season and that’s that. So now, knowing that we’re about to have a third season, [it’s] exciting to see where Tiffany goes and how she develops, because people thought that she was a stank bitch, but you’re going to see that she isn’t.” During the season two finale we learned that Tiffany and her husband, Derek, played by Wade Allain-Marcus, are expecting a baby; so perhaps that character development Seales speaks of will happen by way of Tiffany becoming a mom.

Seals, who is often making people laugh, counts Kristen Wiig and Donald Glover among contemporaries she admires. She hosts a comedic competition dubbed Smart, Funny & Black, and is a regular on talk, radio, and cable news shows opining on pop culture. While her work can be lighthearted and upbeat, rarely—if ever—is her sole intent to entertain.

“A lot of my art is really for black women and for making us feel good and raised up and empowered, and educating other people [about] us and black people,” she says. “That’s really the cornerstone of my work.”

Currently, Seales is pitching Smart, Funny & Black to various networks, planning a foray into the fashion industry (details to come, she told us), and shopping a book of essays, quotes and sketches. “It’s basically the book version of my Instagram,” she says. Most of this is being done in L.A., where she’s lived since 2015, following 12 years in New York. Though she doesn’t miss the East Coast (she compares it to an ex that you break up with on good terms), she’s thankful for the impact that time had on her career—even the stretches when she was too broke to afford cabs, and took the subway to and from high-profile gigs like Def Comedy Jam. “Over the course of those years I was having all these varied experiences that have helped to shape me into the artist that I am now, and I don’t know if I would have been able to have all of those experiences had I had bread and security,” she says.

Today, Seales enjoys driving to work and the fact that she can lie out by the pool year-round. She credits her move to L.A. with encouraging her to take better care of herself (she’s been eating more vegetables and is now a Kiehl’s turmeric & cranberry face mask devotee) and she’s built a strong network of friends and collaborators. “I’m at my mental, physical, and emotional healthiest, and I feel like a lot of people around me are in that same place,” she says. “My time in L.A. has been overflowing with opportunity to be my best self creatively and personally, and I wouldn’t trade that for shit.”