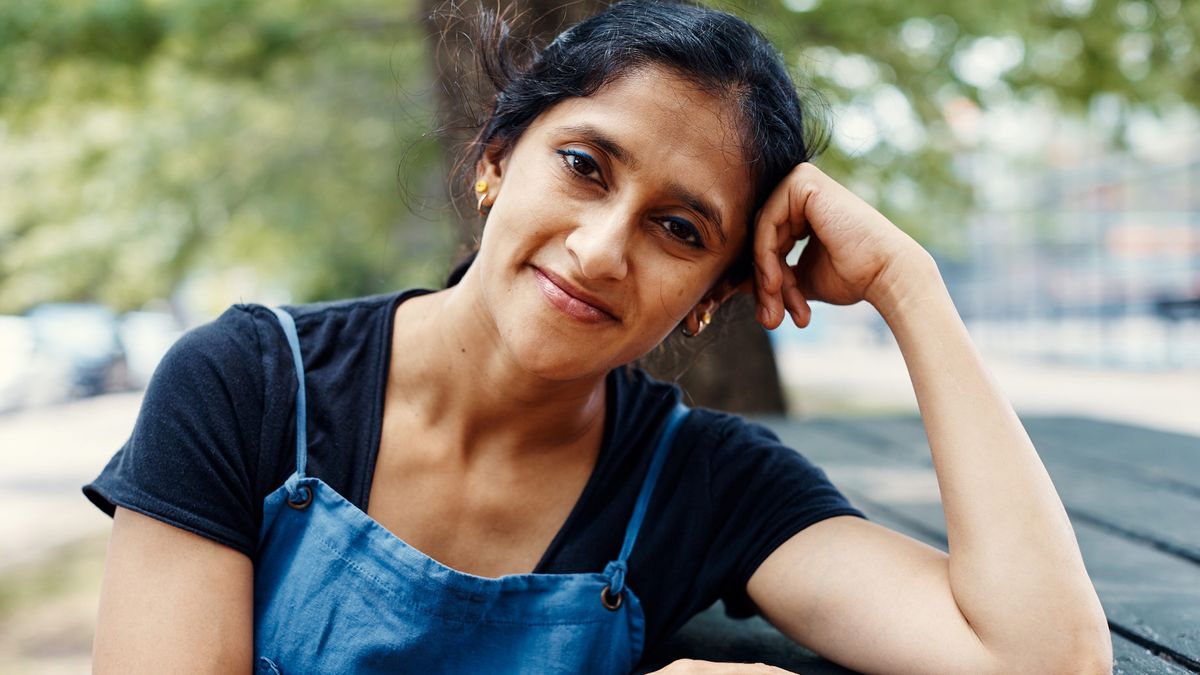 Why Performing Stand-Up Comedy Might Help Relieve Your Anxiety

Aparna Nancherla on why comedians can’t back down during Trump’s presidency.

Aparna Nancherla is beating me in our race to name alternative milks. As we sit in the covered patio of Pretty Southern in Greenpoint, Brooklyn, eagerly sucking down cold brews to counter the sweltering afternoon, she rattles off oat, hemp, almond, and soy. I counter with coconut and cashew, and we agree to name more throughout the interview should they occur to us. Interestingly, neither of us is lactose intolerant—just apparently good at nutritional trivia. This seems like the type of random (read: nearly incoherent) interaction that could make for comedy gold were I drawn to improv or stand-up. How fortunate it is that I am seated approximately twelve inches from one of the most intriguing comedians to emerge from the New York scene in the past few years.

I’m curious to know if there was something specific that prompted the 35-year-old’s love for the genre. “I feel like I came into it kind of late,” she says, absentmindedly stirring her lingering coffee. “I didn’t grow up watching SNL, and I definitely didn’t think it was a viable career option for anyone. I tried stand-up for the first time during college. [It] opened up my world in a way that I hadn’t considered before.”

That world eventually grew from her hometown of Washington, D.C., to a small liberal arts college in western Massachusetts and finally to New York City, where she’s performed everywhere from Bushwick coffeehouses to Columbia University. And that’s just when she’s not on the road. “This past year is actually the most I’ve ever traveled since I started comedy, and I think I enjoy it, but I also realized I have a limit. It can feel very isolating because you don’t see your friends, and then you’re out of the loop.”

Nancherla is refreshingly honest about having anxiety and depression, and often references her experiences in her act. “When I started talking about [these feelings] I didn’t really have an agenda. It resonated with a lot of people in a way I didn’t think it would, so it encouraged me to keep talking about it.” She also recognizes that many creative people struggle with similar feelings, or have trouble pushing past a creative rut. “The weird thing with creative professions is you’re going to go through periods where you’re more and less inspired. There isn’t always a rhyme or reason to it, so you have to sort of be okay with a period where you’re not feeling the better ideas. You just have to know it’ll gradually creep back in, and then you’re like, ‘I’m back!’”

With the bar for comedy set high, especially in New York with SNL, I ask how she would advise young comedians to begin navigating the industry. “Be okay with success looking different than how you originally envisioned it. In entertainment, a lot of the opportunities you get are not ones that you will have predicted. You never know where you’re going to get a break, so you have to be adaptable. It can hopefully get you closer to something that you do want to be doing.”

Luckily, Twitter is the great equalizer for finding out who is just plain laugh-out-loud funny, and Nancherla is consistently damn good. So, who does the social media master follow when she’s in need of her own comedic relief? “I follow too many people, so my timeline isn’t very curated. I really enjoy Megan Amram, who is a big one for a lot of people. I like this one called Pixelated Boat. It’s more absurdist, and I’m not even sure who writes it, but it’s one that makes me laugh and has a lot of weird stuff.”

The comedian isn’t just limiting herself to 140 characters or a 15-minute set these days. Last December, Aparna penned an illuminating op-ed in the Village Voice about performing stand-up post-Trump’s election. “It’s such a weird time to do comedy. I’ve heard people say, ‘Oh this must be such a great time for comedy!’ Not really. There’s always stuff to make fun of, [but] it’s almost trickier to find a way to address it that’s not bumming everyone out. The good side of it is [that] a lot of people I know, including myself, have gotten more responsible for being politically active and doing more shows [that fundraise] for ACLU or Planned Parenthood. Doing more than just talking.”

I ask if she feels any pressure to be funny or be “on” all the time, now that so many people, myself included, are looking to comedians as relief from feeling that the world is about to implode. “I go back and forth between really enjoying what I do and feeling really lucky to do it, but then other times being like, ‘Oh, you’re not contributing anything.’ So, sometimes it’s hard for me to internalize the fact that people do find comedy therapeutic. I get a lot of messages from people who will be like, ‘Thank you so much for talking about this on stage, it made me feel less alone, or it made me laugh for the first time this week.’ That’s the stuff that is really humbling and makes you feel like, maybe I’m adding a little piece of something to the world that is helping people.”