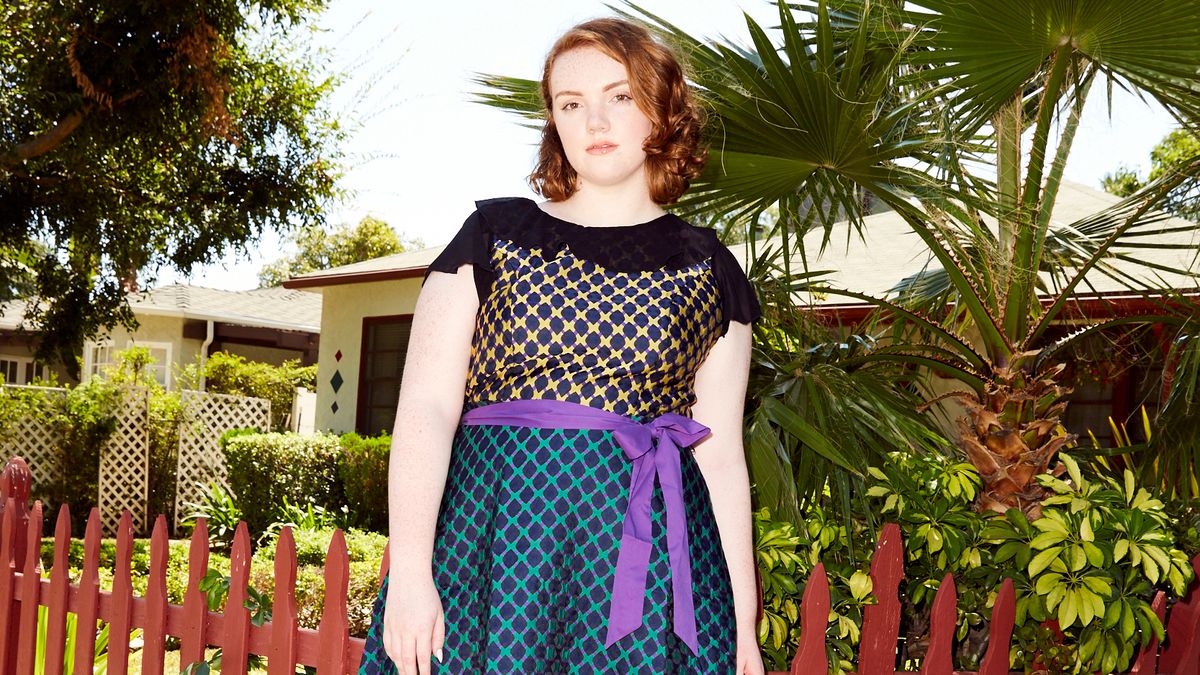 The Emmy-nominated actress talks Stranger Things, her next move, and morphing into Leonardo DiCaprio.

These days, it seems like you can’t watch anything without spotting Shannon Purser. She was the lovable, gone-too-soon Barb on Stranger Things, the bullied Ethel Muggs on Riverdale, and soon, you’ll see her pop up on NBC’s Rise, a new series surrounding a controversial high school musical. Long story short, the girl’s taking over our screens—she was even nominated for an Emmy for her Netflix role—and we aren’t mad about it. Not one bit.

Our fan status likely has to do with the fact that Purser just seems so…us. She shares cute photos of animals on Twitter, but then speaks out about mental illness, a topic that’s important to her. She’s a self-proclaimed “grandma,” but still knows how to work it in front of a camera. She even showed up to our photo shoot with a handful of outfit changes, jumped in a pool, and still managed to look *flawless* afterward. Then, she sat through our questions—including those about Emmy night, Nancy, and her dream superpower—answering them thoughtfully, hilariously, and with mentions of Leonardo DiCaprio.

Have you imagined what Emmy night will be like?

“I’ve definitely thought about it, but am trying to keep my expectations realistic. I’m up against some really incredible actresses. I think either way it’s going to be a really cool night.”

How has life changed since Stranger Things?

“I remember being so excited to have a Netflix show on my résumé and hoped I’d get another part sometime soon. Then, the character blew up and I’ve gotten a lot of incredible opportunities since then. It’s really kind of amazing.”

Natalia Dyer told us that Nancy wouldn’t have left her friend if she knew there was a monster out there. What do you think?

“A lot of people blame Nancy. It wasn’t a great friend move, but at the end of the day, she wasn’t a terrible friend. I think if she knew Barb was in danger she wouldn’t have left [her] alone.”

“In my mind, I think she would return with superpowers and rule the world, but more realistically, I think it would be cool if she had a funeral or something. I feel like her mom deserves to know that her daughter is dead. That would be nice justice for sure.”

If you had to guess, what happened to Barb in The Upside Down?

“Unfortunately, I really don’t think she lasted very long. The demogorgon had already kind of snuck up on [her]. I like to think that she put up a good fight, but in the end we see her body and it looks, like...ripped into a little bit. Poor Barb.”

Can you tell us about your upcoming movie, Life of the Party, with Melissa McCarthy? Do you enjoy doing comedy?

“She’s the coolest, kindest person in the world. There wasn’t really a part for me in the script, and she literally contacted my agents in Atlanta and was like, ‘I want Shannon in this movie.’ It was crazy. I think I cried when I got the phone call because I am so in love with her. There’s kind of this assumption that comedy is somehow easier than drama, or that it doesn’t require as much work, but comedy is terrifying to me. Not everybody has the gift of good comedic timing or being naturally funny or being able to improvise when you need to. It was a whirlwind experience, but Melissa was so gracious and we had a lot of fun playing off each other. It was kind of the perfect way to get my foot in the door.”

You’ve said you’re a homebody. Would you consider yourself an introvert?

“Very much so! Some people think that introverted and shy are the same things. I’m not a very shy person, and I don’t feel like I’m terribly socially awkward—maybe I was in middle school, but I think I can handle myself now. But for sure, being around people for too long kind of tires me out. I like being a grandma. I like staying home. I like sleeping. I like reading books and drinking tea, and that’s just kind of how I live my life.”

You’ve also been open about your battle with depression and mental illness.

“There is definitely a stigma against mental illness, but a lot more people deal with it and struggle with it than you might imagine, and it’s something that’s really important to me. I had a lot of times where I felt very alone and misunderstood and nobody could understand what I was feeling. I want to remain humble. I know that I’m not a savior or anything, but I think that people are looking for someone to look up to. Or at least a hand to hold and somebody that they can relate to. I really try to be that person.”

If you could create a superhero, what would it be?

“I’m definitely into the whole Eleven style of moving things with your mind. I think that would be super cool, but shape-shifting would be the best, assuming that you could get the other person’s power if you shape into them. You can do whatever you want!”

Who would you shape-shift into?

“I would like to be Leonardo DiCaprio for a day. I would be interested to see how he lives his life. I’d probably just hang out, see if I could go to Starbucks and get a free drink.”

So, what does the future hold for you?

“I don’t even know. I kind of feel like my life has become me wishing and a fairy godmother making it all come true. Two years ago, I would be like, ‘I want to be on TV.’ Now, I’m nominated for an Emmy, which is insane. But I think winning an Oscar would be super freakin’ cool.”