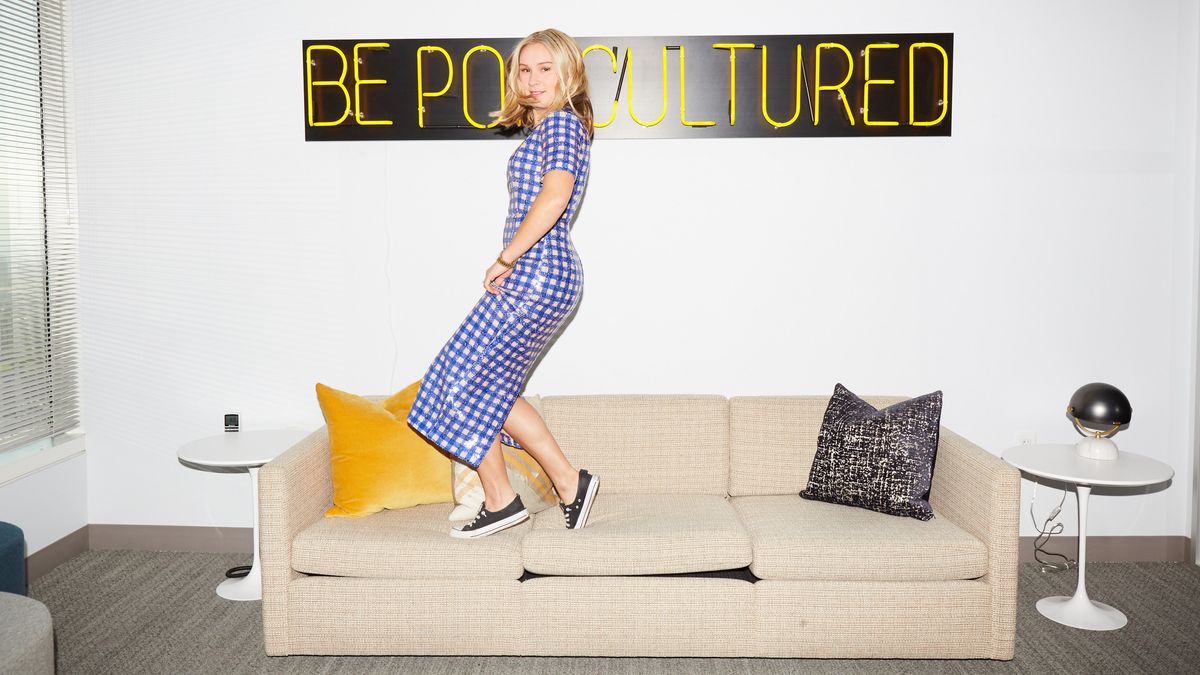 It also involves planning Comic Con, designing the E! Offices and making NYFW after-parties happen–where do we sign up?

Wendy Schellinger has a job that I didn’t think existed. Technically Wendy’s role is Senior Vice President of Special Events and Environmental Design at NBCUniversal but she tells me what she does on a day to day actually doesn’t fit on her business card.

Her unofficial title amongst co-workers and friends is actually “the human Pinterest board.” After talking to her for five minutes it’s evident why; she not only has ideas upon ideas but she actually executes them, helping to create shows, put on events and create spaces that we all enjoy without even thinking who made this happen? From celebrity gifting to designing the E! Offices, to overseeing TV shows, Comic Con and NYFW events, she doesn't stop. I think I need to pin Wendy in her entirety to my Pinterest board (her job title probably wouldn’t fit.)

Here she talks about why Kourtney Kardashian is one of the nicest people to gift, why she’s really proud of designing a lint roller and how to throw a NYFW party with 100 Andy Warhols.

What her business card says:

“My title is Senior Vice President of Special Events and Environmental Design and I have some other stuff along with that. It just becomes a little obnoxious on a business card, so I abbreviate it to the shiny objects. I oversee the cable portfolio for NBC, which my main focus is on E! I'm the support for the other cable networks such as Bravo, Syfy, USA, Sprout, Oxygen, etc. They’ll tap into me if they need things like support of the Mr. Robot activation or for Comic Con. I work with the in-house cable productions that oversee a lot of the USA and Syfy shows. I help bring those brands to life!”

“Another aspect of my job is branded goods, which is premiums—basically anything we put a logo on that we try to create really interesting and groundbreaking items. Sometimes they can be as simple as one fashion week I made mini lint rollers with a branded exterior, and The New Yorker did a whole comic on them. They did five pages and the headline was ‘New York Fashion Week is Free Lint Rollers.’ You never know what’s going to hit a chord and I remember I had to fight for those because the head of marketing was super supportive but didn’t understand why anybody would want this.”

She buys presents for the most famous people in the world (NBD!):

“Two other aspects of my job is talent relations, which means we’re responsible for gifting talent on any special occasion. That could include birth, birthdays, weddings, any monumental life moments to show we, the network, recognize what’s going on in your life and we want to make sure that you feel the love!”

What to get the celebrity who has everything...:

“We think a lot about it so other people don’t have to think about it. Back in the day, I know everybody’s heard these infamous stories of the Friends cast got...I think they got Porsches for their renewals and things like that. From a cable perspective, we never played in that field. We used to have bigger budgets. But actually, the budgets are streamlined where every talent gets exactly the same amount of money allocated per year for special occasions. That’s made that aspect of my job actually more unique,  interesting and precise because when you get Kim Kardashian who has everything, so if you put a budget limit on it, it actually causes you to really dig deep and get something a little bit more interesting and more unique to that individual.”

...and why they can be like the boyfriend who doesn’t text you back:

“I always equate talent gifting to a boyfriend that won’t call you back, like the more you give the less they really care about you, so it actually has worked in our favor having a limit to what we give because it’s caused us to really hone in and kind of get that not that expensive item but really unique and it’s a living, breathing relationship that we have to stay on top of because talent changes day by day and one day their favorite drink is this and the next day they’re not drinking at all, so you kind of have to make sure that you’re up on current events. Or they’re not in that relationship or, you know, so we not only try and make sure—we have a database so we know what their favorite restaurants are, what their likes and dislikes are, so we have the common stuff covered, but what we also try to do is try to hit unique tones.

“Kourtney Kardashian is one of the nicest persons in regards to the gift giving. It’s fun to watch what we gift her show up in her life. We gave I think it was to Mason, when he was little, we gave a black and white teepee and I remember when she was showing her house a couple of houses ago, she put it in her living room. And she personally thanked me for a couple of those things. We really try and hone in on the actual individual and what they might like and what they’re into and so although the budgets aren’t big, what we really try to do is personalize it in a way that they know that a lot of thought and care [went into it] and it wasn’t just a quick click-and-purchase.”

“My job is the overall vision of Comic Con events, so it usually starts with venue selection. Our art team does a really great job of ideating on what we want the look and feel to be and we start storyboarding early on and we take into consideration budget and also existing furniture versus furniture we can move out and bring other pieces in that will shine up the space.

“For the rest of the responsibilities for Comic Con, I hire all of the vendors, execute the vision from the decor to the audiovisual to security to everything that keeps the lights on and keeps it running to the food and beverage, sometimes we’re locked into who the venue lets us know we have to use for food and beverage but other times we can source out every single piece of it, we can source out the food, we can source out the beverage, we can source out the servers, it just depends on the venue. And then I’m in charge of the run of show, which basically means I’m the main point for troubleshooting for anything, any little problem. My most favorite part of events is soundcheck before everybody gets there, especially when there’s a performer because it’s such a beautiful calm, you get a private performance and no problems have started...yet.”

And helped bring 100 Warhol’s and a polaroid tunnel to NYFW:

“E! is the official media sponsor of NYFW, so what that entails is we work to do a spot, now it’s moved to Skylight Clarkson SQ where it’s basically the hub of the three major runway shows. This last season was probably my favorite.This opportunity was given to us where Christie’s had secured almost 100 Warhols. We met with IMG and thought, ‘What can we do with this?’ So we took that start and I said, ‘You know what? Andy Warhol is pop culture. E! is the ultimate pop culture destination. Andy Warhol died the year E! launched, let’s dig in.’ So not only did we sponsor, so there were Warhol exhibits throughout the Clarkson space, what we did is we took that concept even further and the space we built, we dug into the Warhol concept and we built this space where you walk into these beautiful white bridges. It was the border of a Polaroid tunnel where people would come and do their interviews.

“And then the last part we did was we did the opening night kickoff party with IMG and Elle Magazine. We really leaned into the Warhol theme and made it a silver factory. We had Mylar balloons everywhere, we wrapped everything in this silver. Then we actually also brought in more of the Warhol pictures so people could feel that connection. But my most favorite part of that event was we were able to actually purchase a Warhol from Christie’s and we auctioned that off at the party. So what I wanted it to say is ‘A party for all, a Warhol for one.’”