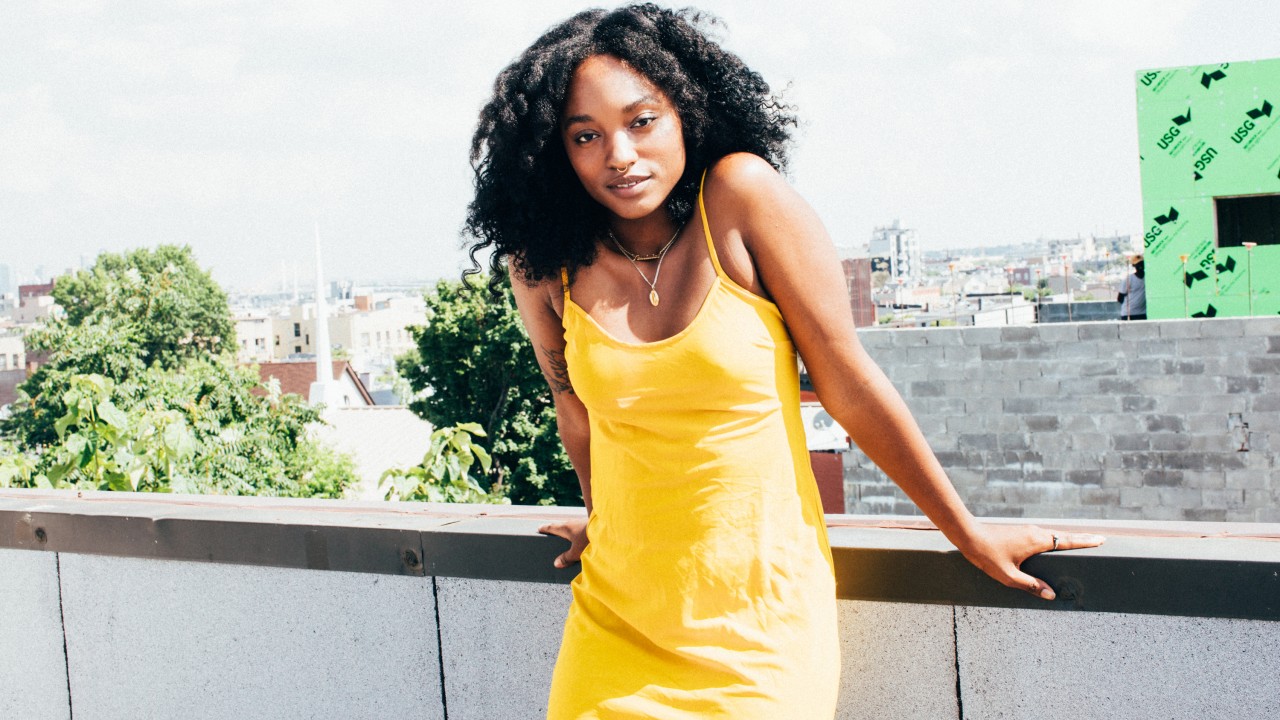 This Model Loves Her Crooked Teeth and No, She Won’t Fix Them

She talked to us about ignoring negativity, embracing body hair, and how, contrary to her Insta handle, her name isn’t really Frida Cash Flow.

Brooklyn-based Gabrielle Richardson poses for photographs as a Muse model and strives to gain representation for queer artists of color as an Art Hoe Collective curator. Spending a few minutes looking through her Instagram will make you realize a couple things:

1. While her handle @fridacashflow isn’t her real name, it would make a great rap name. And it would be hers, she claims, if she had one. 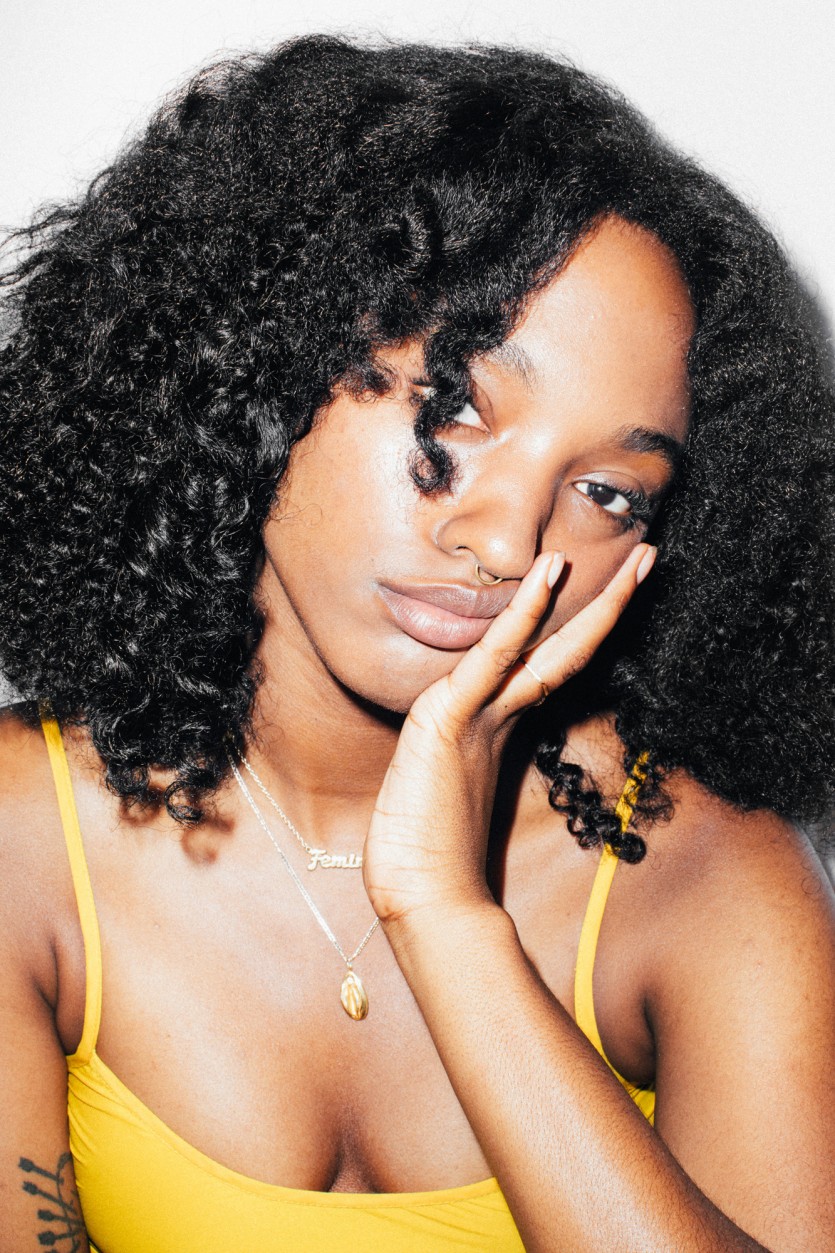 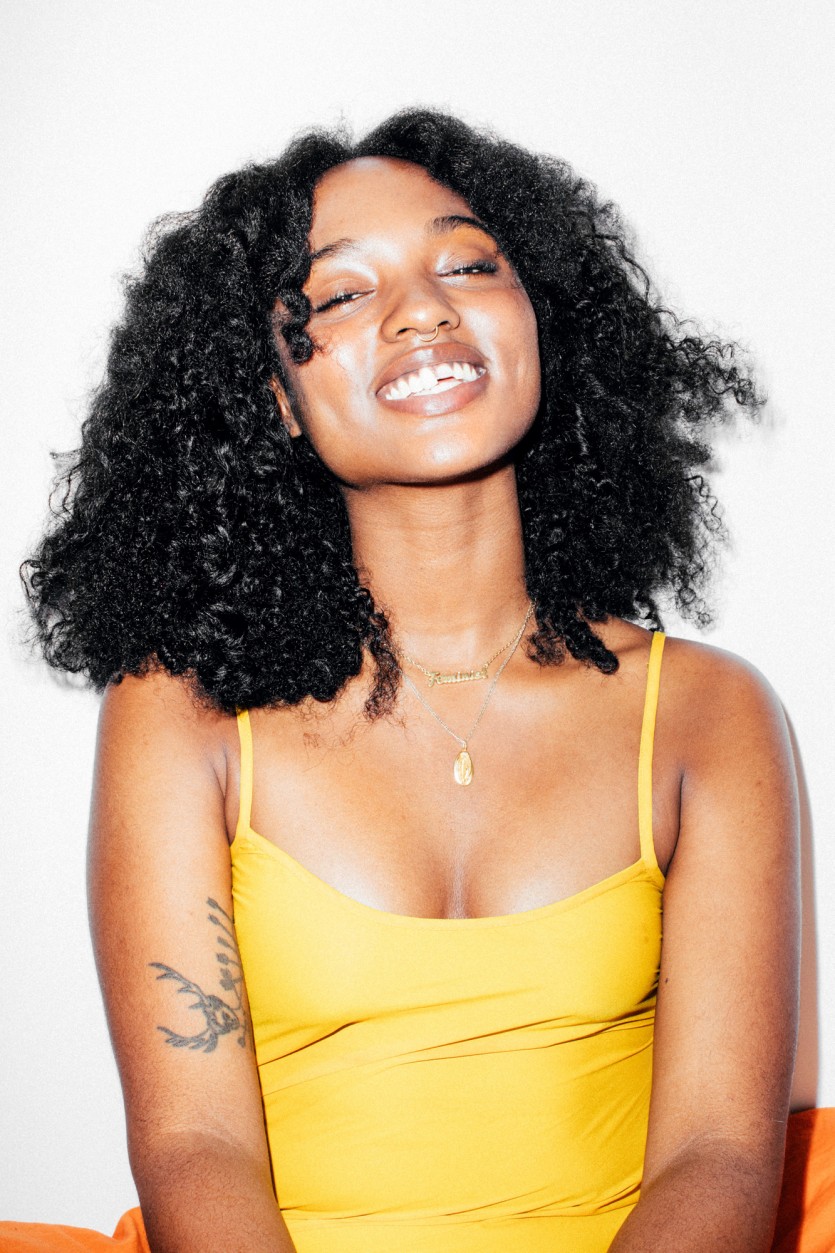 When you look at someone’s photos on Instagram endlessly, you have expectations, and when Gabby opens the door to her apartment, I know she’ll be beautiful. She hugs me before I even introduce myself, smiling with crooked teeth that she says she’ll never fix. It’s hot and there’s sweat on her cheeks, but she looks just like a picture, a painting, a girl in yellow against an orange bedsheet who wears her love for Frida Kahlo on her bicep. Her inspiration for being a model isn’t to lift herself up, she says, but to make other girls feel beautiful. It’s true; being in the room with her immediately made me forget the hangup I had about my eyeliner that morning.

When the light streams through her room, she suggests going up to the roof, where she runs her hands through her hair and leans against the ledge, closing her eyes with her chin up. And yet when I bring up castings, she mentions feeling out of place: “I‘d go and there would be so many thin, blond girls, and I would think, ‘Do I even belong here?’ Of course, the other girls are beautiful, but no one looks like me. I am my own self and that’s beautiful.”

Here, she talks about her grandma threatening to haunt her, how she tunes out the negativity, and why using more than one shade of foundation is the summer makeup trick you shouldn’t be afraid to try. 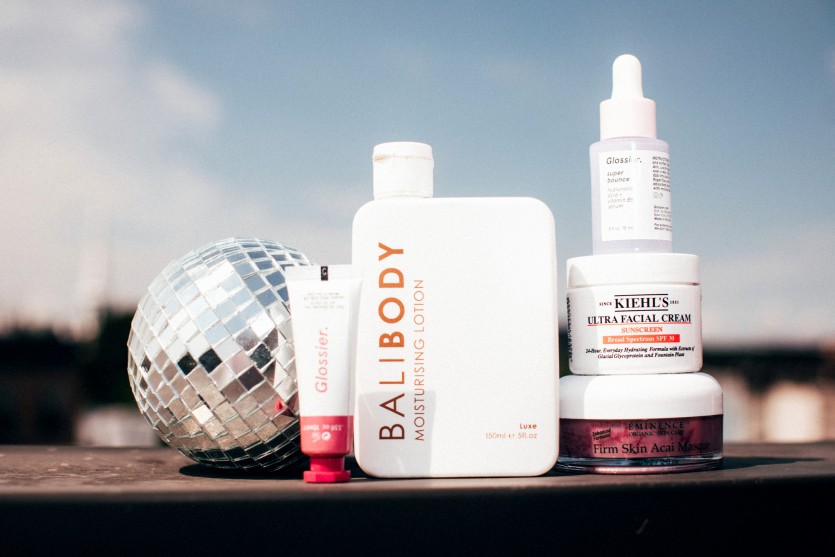 She has crooked teeth and she’d like to keep them that way (no matter what her grandma says):

“So, I’ve always received a lot of flack for having and keeping my teeth crooked. I love them, personally, but a lot of people have said really rude things to me about it. My grandmother hates my teeth the most out of everybody. She sat me down and she said, ‘Gabby, if you don’t get this teeth fixed by the time I die, I’m going to haunt you in your sleep! I’m going to haunt you after my death until they’re fixed.’ Yeah, [laughs] it’s a very real story. That’s her go-to threat, haunting people after her death. She knows she’s an old woman, she can’t do much now but more power to her after she dies.”

How she got over her insecurities and dealt with bullies (both online and on the street):

“Yeah, when I was younger, [teasing] definitely hit me really hard. It was hard navigating through high school with crooked teeth. Everyone would be like, ‘Oh, is your tooth broken?’ It kind of first started when I was using social media like Tumblr and Instagram. People would say, ‘Bitch, you need to get braces.’ And really violent things over something that is just a part of me. I felt insecure about it, but now I feel like they kind of showcase my personality, I think little imperfections just show who you are. They become part of your character.” 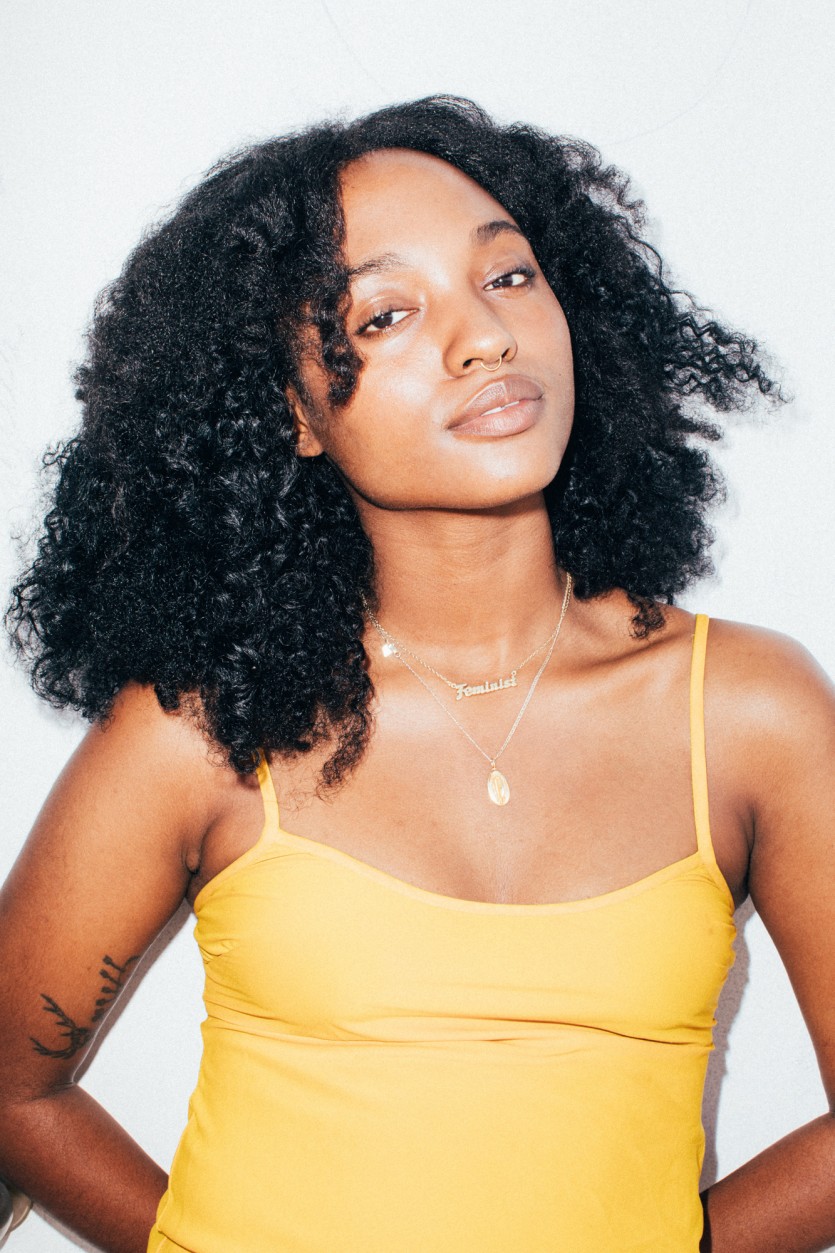 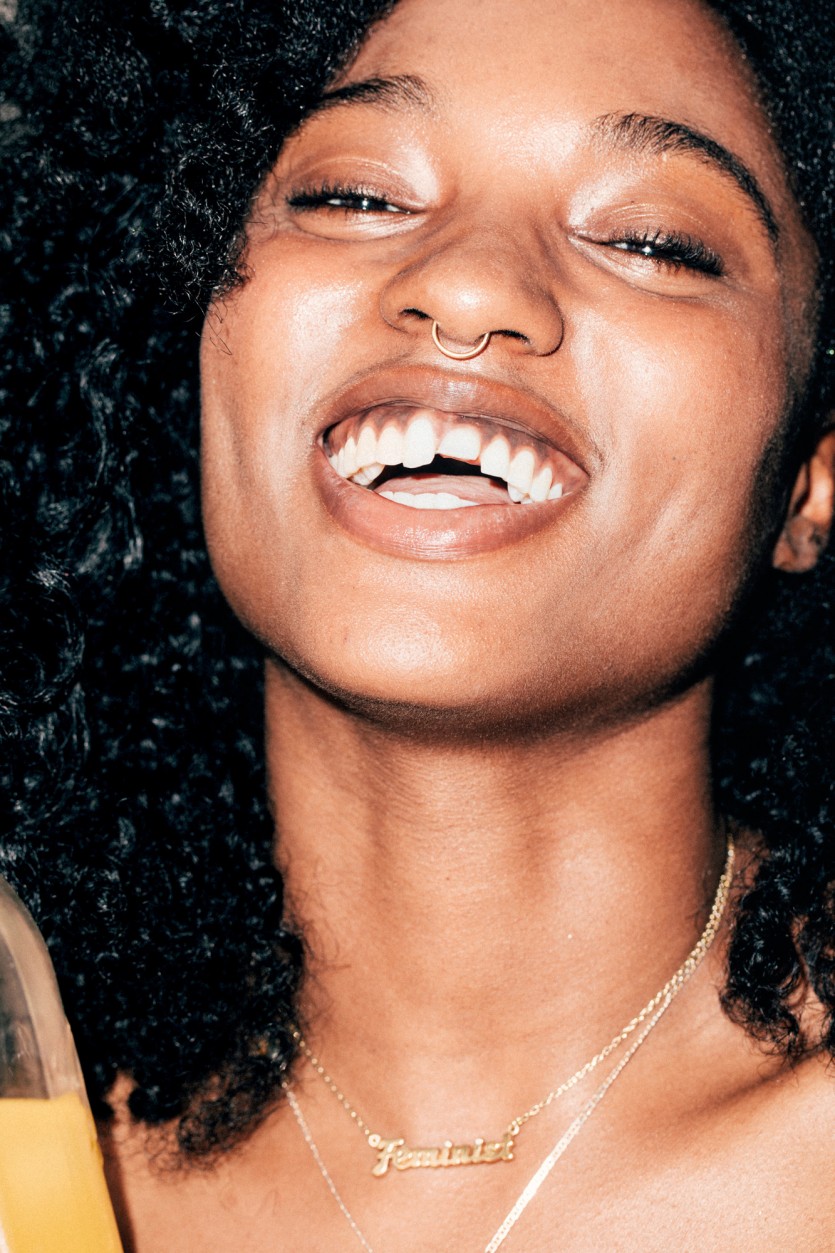 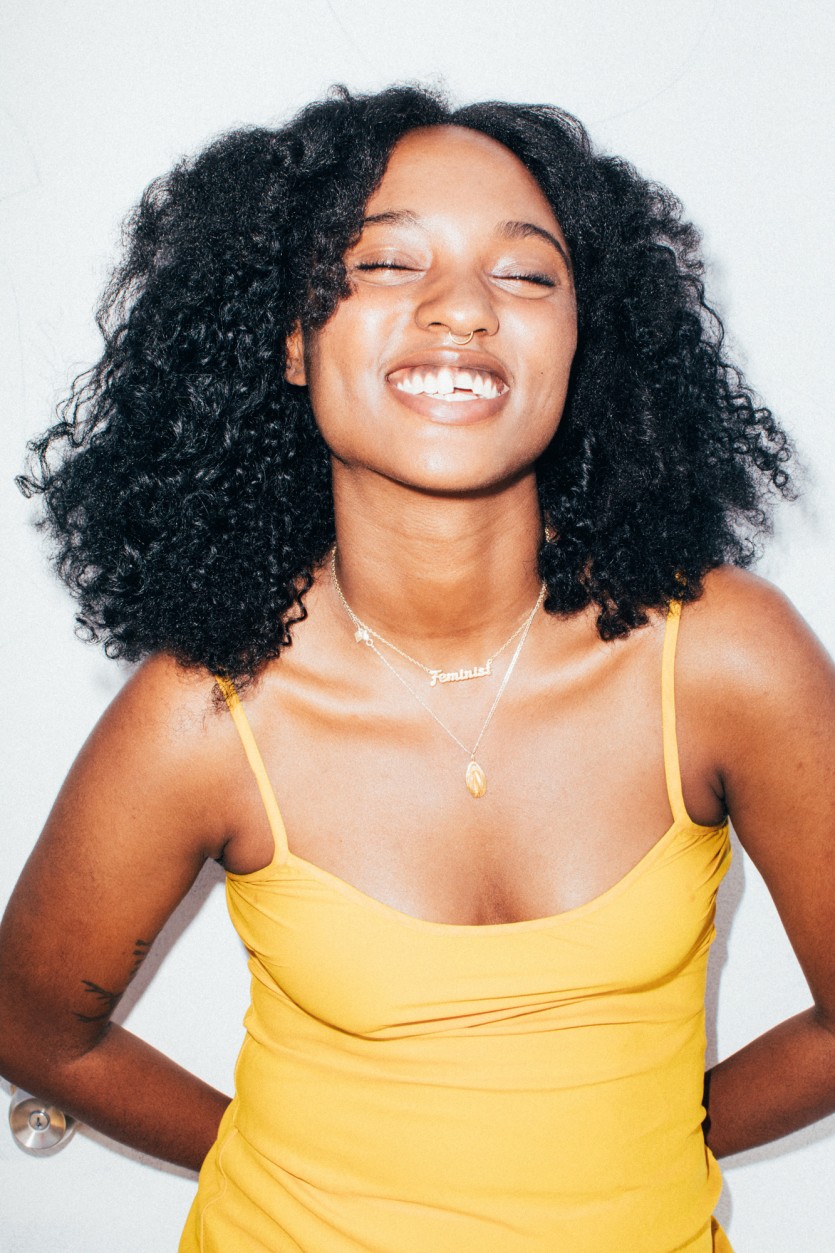 What makes her feel most beautiful:

“Recently, about two months ago, I received this message from this girl; she was, like, 16 and said to me, ‘I’ve always felt really insecure about my crooked teeth, I’m really grateful that you’re so proud of yours because they helped me become proud of mine.’ I want to be the person that someone can look into the magazine and feel good about themselves instead of feeling bad about themselves. That made me feel so beautiful. One time I was doing a shoot in downtown L.A. This guy on the street started harassing me while we were taking the photos, he was saying all this awful stuff to me. He was calling me ugly, saying awful stuff. Then this little girl was walking with her mom across the street and she’s like, ‘Mom, stop... That girl has hair just like me!’ They both stopped and watched me and what that man said washed over me because I felt like that little girl can relate and she felt good about herself in extension to me.”

Why Donna Summer is her ultimate summer beauty icon:

“I’ve been listening to a lot of Motown and disco recently. That was such an era where there was individuality and people were so proud of it. You could really express yourself then, especially the black community. They all had beautiful hair! And I want to incorporate that pride into my look, that’s why I switched it up to a middle part, because of Donna Summer.” 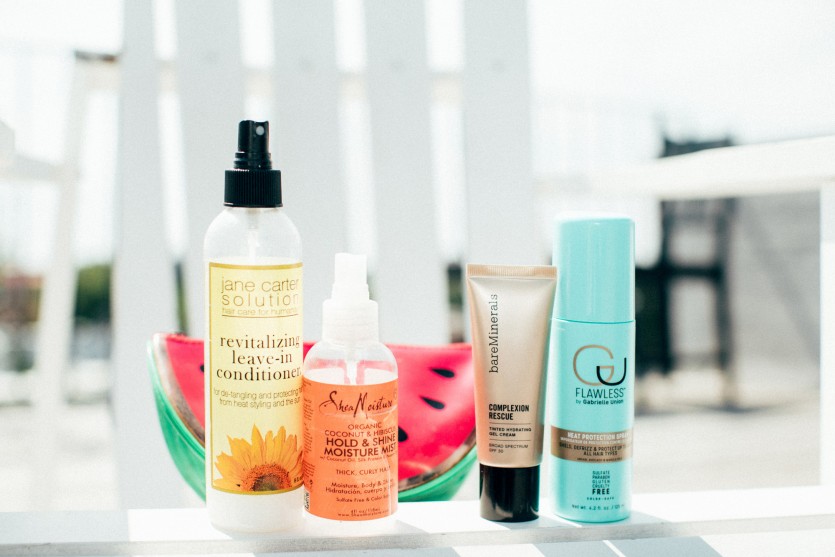 Why she embraces her body hair but doesn’t think it’s a big deal:

“I’m never going to have straight, light, faint body hair. It’s going to be coarse and curly just like the hair on my head. I feel like growing it out is kind of just a measure of time and measure of me and what I’ve done and what I’ve gone through. Growing out my body hair just kind of is proof of my existence. It’s a measurement of time. Sometimes I do shave it off, but it’s not because I want to shave it off for anyone else. It’s kind of like I’m starting over. I think it’s just me trying to accept me in all forms.”

Her go-to product for the summer:

“One thing you have to do is keep your hair moisturized no matter what! I use coconut oil. I’m also obsessed with SheaMoisture Curl Smoothie. It keeps my curls still going so they’re not giving up on me. It keeps them alive! Also, the Gabrielle Union anti-frizz spray helps keep my hair less frizzy.” 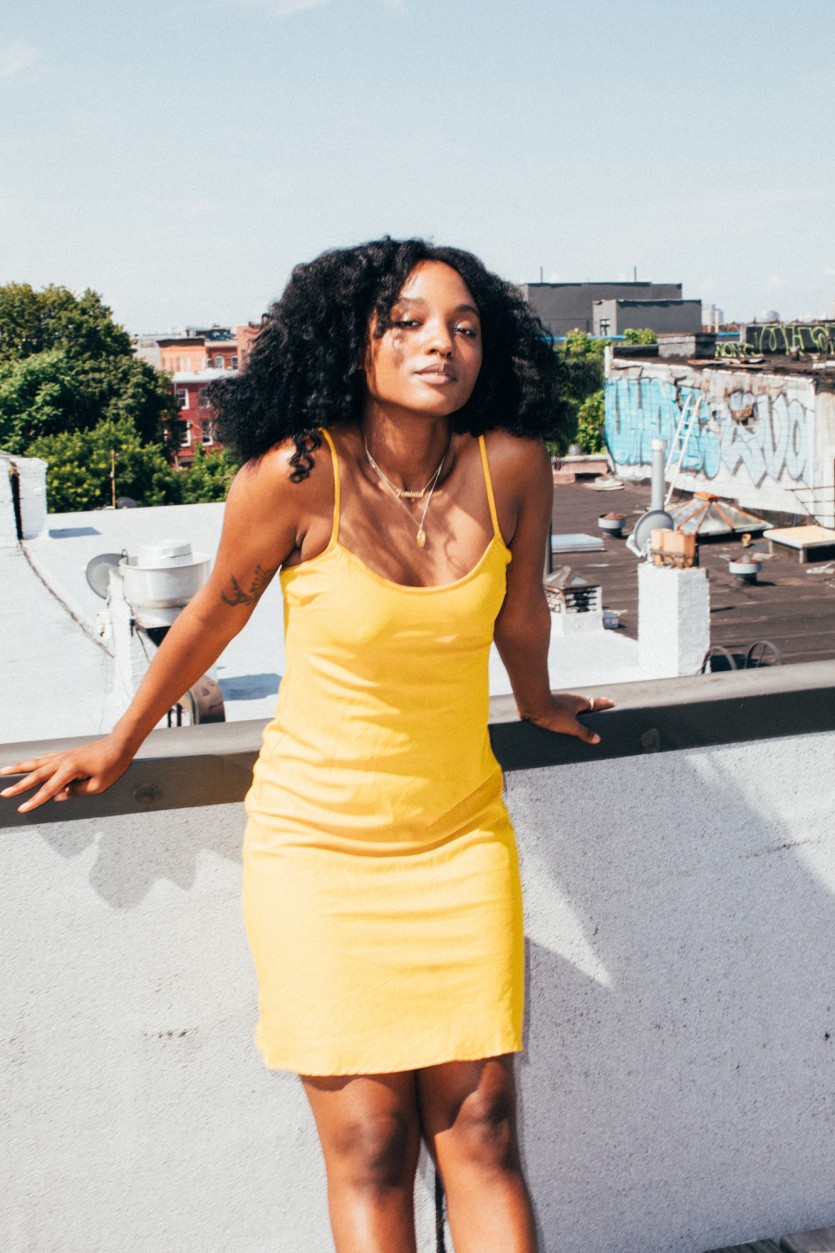 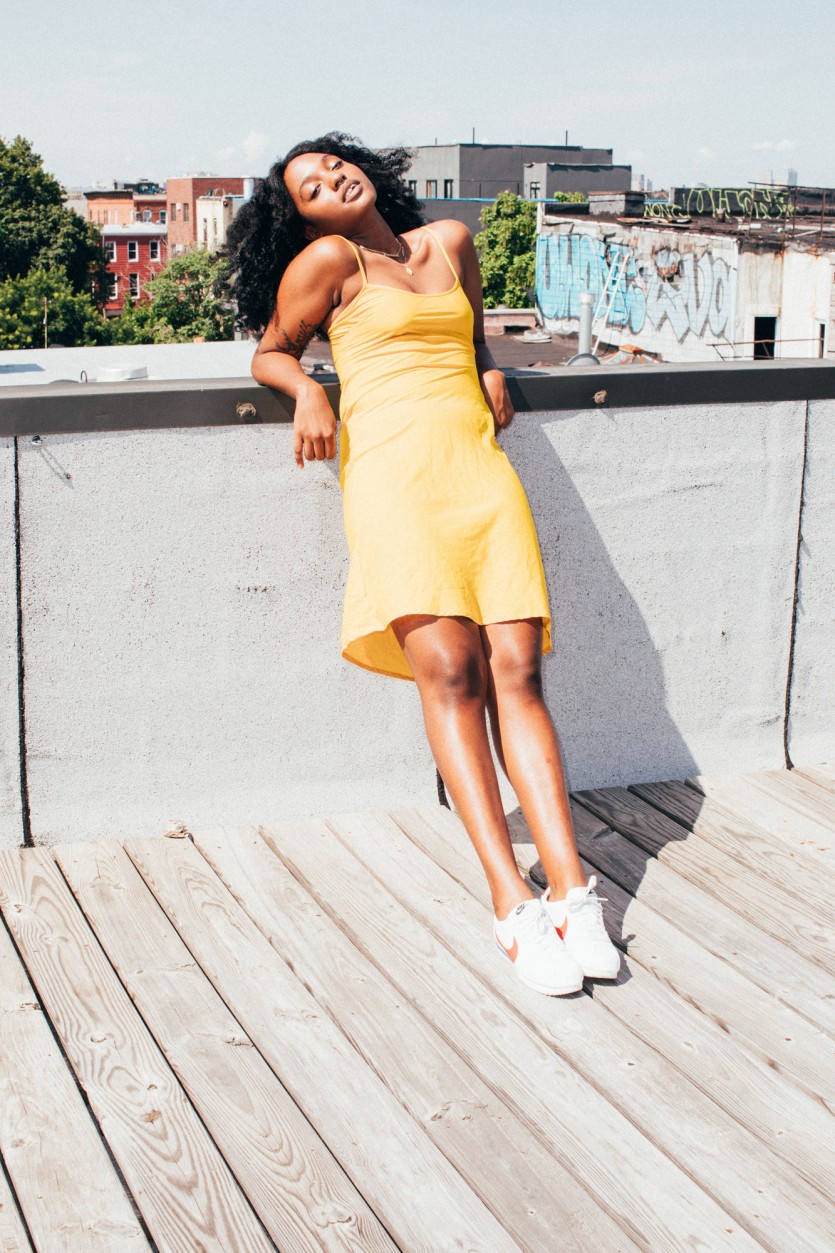 Her casual look during the heat involves different shades of foundation:

“My casual beauty look is super clean. I just wear concealer, the same one I’ve been using since I was 15. L’Oréal True Match! I never bought another concealer. I also mix it up sometimes with a Glossier concealer, and I also have a Milk Makeup tinted moisturizer. I think one thing with makeup that is really important is that you don’t have to use one shade. Your skin is different on different parts of your face. If you have one foundation and one concealer, and it’s not matching perfectly, I understand. Sometimes you need just, like, different tints. Like your forehead could be like a different color from your cheeks. It’s okay to use more than one product.”

And her going-out look is all about different-colored eye shadows:

“I love the Milk Makeup mascara. I’m obsessed with blush, I love having really pink cheeks. I have Glossier Cloud Paint in Haze and Milk Makeup’s rollerball blush. I love playing with eye shadow. I’m into the color yellow as of late. I love yellow, blue, or red eye shadow that just gives my eyes a pop. I use a lot of NYX eye shadow, which I’ve also been using that since I was 15. Got to stick with the classics! If not [playing up my eyes], I’ll put on a lipstick. I love the Nars pencil lipsticks.”

But she never forgets SPF:

“I have oily-normal skin, but my skin is a lot oilier in the summer. I think in the summer, just make sure to use appropriate SPF! I use Kiehl’s Ultra Facial Cream Sunscreen SPF 30.”