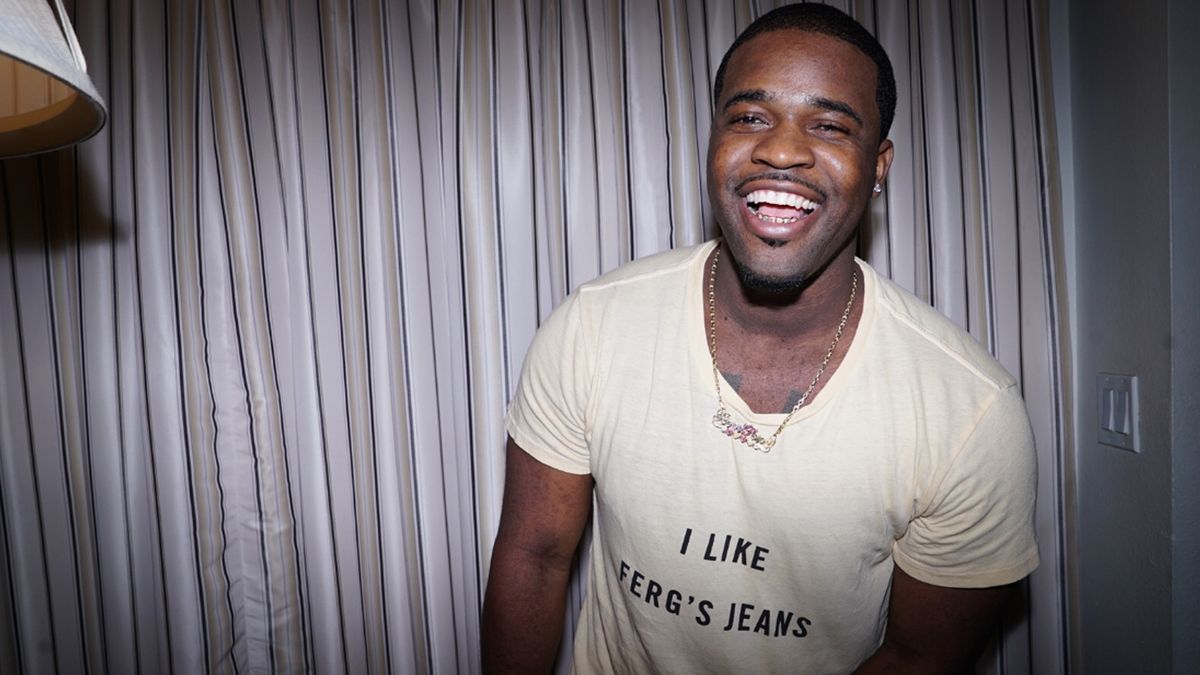 And then he created a line with AGOLDE.

A$AP Ferg doesn’t buy it when people say they’re bringing the ’80s back. He knows it’s not as easy as just throwing on an Adidas red tracksuit with a pair of gazelles, not because the 28-year-old rapper lived through the ’80s but because he grew up with his dad, in Harlem, who did. A$AP Ferg’s upcoming denim capsule with AGOLDE for fall 2017 was inspired not just by where he grew up but also who he grew up with. “Harlem inspired the line, yes, but more so my dad did. Just his personal style, looking at how he used to dress. I’m talking about Harlem, the guys, the hustlers that walk around with their sheepskin coats and their fitted jeans with their Rolex watch or their nugget bracelets. That’s the ’80s.”

A$AP Ferg loves that New York vibe, the one only real New Yorkers can truly understand or feel nostalgic for. He talks about the park picnics that came after the gang wars in the Bronx in the ’70s, the start of Hip Hop, the outfits. “I wish I could live through that. But I’m living that in my own way by bringing it back through my designs.”

The jeans are reminiscent of that time, faded but not too obviously so, with simple tees and sherpa-lined jackets. His lookbook also feels from another time, and A$AP Ferg cast the entire campaign himself, with friends, locals and his brother standing on Hamilton Place. He wasn’t playing favorites, though. “My brother just dyed his hair blonde and his girl’s hair was blonde as well, so I thought ‘Wow, you look dope!’ If they ain’t look dope, I wouldn’t have used them!”

It’s evident Ferg hasn’t forgotten where he comes from, and the jeans he designed are actually based on his own pair. “I duplicated the jean I wore before I made any money, before I got signed. People used to be like, ‘Man, Ferg, you got money now, you can stop wearing those jeans.’” Instead of throwing them out, he’s made them again with AGOLDE for everyone to wear. He laughs thinking about what his friends would tell him. “Now I’m like, ‘You know what? You gotta see them all the time!’”

Ferg’s hope is that now his friends will be wearing them everywhere (he recently saw Big Sean wearing a pair without even knowing they were Ferg’s). And yes, girls are included. “I got tired of all my girl homies trying to steal my clothes! Always trying to take my jackets and my jeans and everything. I thought about that and what would flow good on a female’s body, but at the same time would be masculine enough for a man to feel like a man in it.”

He actually didn’t just provide the vision but assisted in the execution, having spent a week in denim-making classes (yes, seriously) at AGOLDE’s factory in L.A. “It’s not just some artist collab that I threw my name on top of.” Actually, Ferg isn’t concerned about his name being on the label; his favorite thing about the jeans is that they’re not loud at all. “It’s not about the name. These jeans are you. I want them to become a part of you.”

But that doesn’t mean he wants you to forget about him either. When I ask what he wants people to say when they see the line, he smirks and points at his shirt without saying a word, the text across his chest reading: “I like Ferg’s jeans.”

You can purchase A$AP Ferg x AGOLDE online at The Webster today or on AGOLDE.com starting on 7/27.