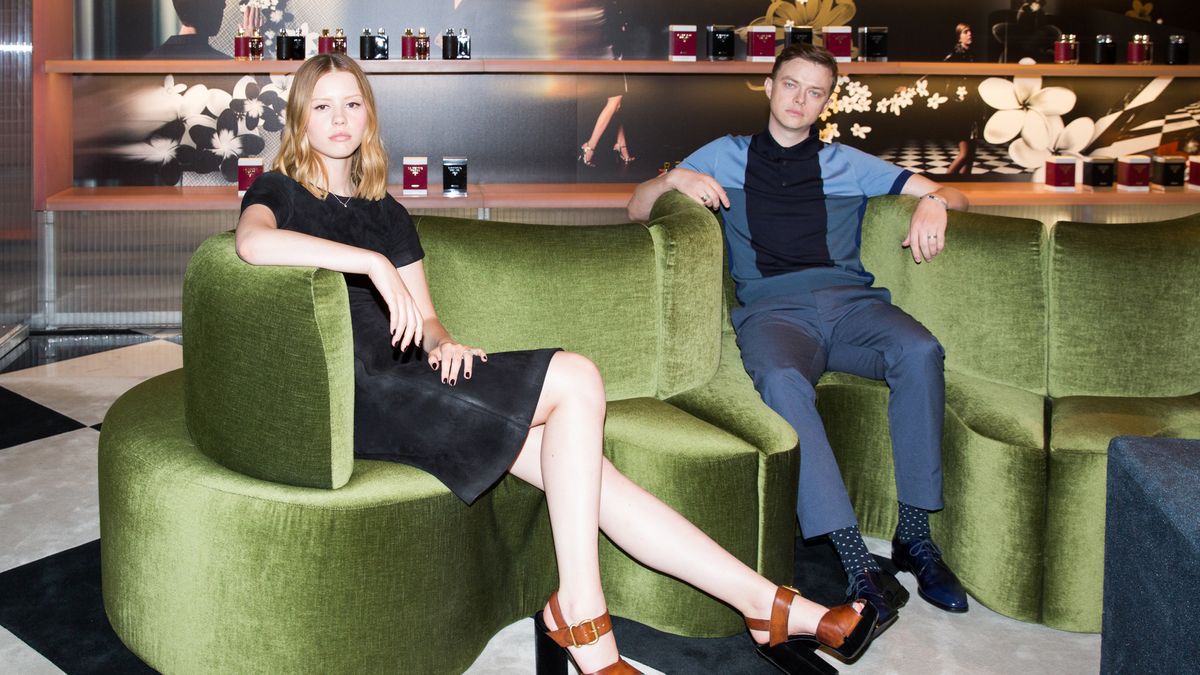 Chatting with Mia Goth and Dane DeHaan at Prada’s SoHo store, it sounds less like they're describing fragrance and more like a gender studies discussion. “There’s something quite sensual about it,” Mia begins, referring to La Femme Prada Intense, one of the brand’s newest offerings alongside its counterpart, L’Homme Prada Intense. “It’s breaking boundaries as to gender stereotypes and is more about the individual.” Dane, who appears in Prada’s campaign alongside Mia, chimes in. “They’ve added notes that play with the femininity and masculinity, so [the fragrances] are fairly interchangeable.”

The two explain that rather than choosing exclusively between men’s and women’s, one should entertain some fluidity, if you will. “That’s how they’re designed,” says Mia, while Dane adds, “It just depends on your mood. So, like, which one you respond to.”

Both smell pretty irresistible in their own right, including notes of tuberose and ylang-ylang for La Femme Intense, and iris and tonka beans in L’Homme Intense. But a conversation about smells was only part of this interview. Ahead, we ask the actors a few word association and summer-related Qs, leading to revelations about Mia’s cooking and Dane’s new adorable baby, Bowie.

Would you say you live intensely?

Dane DeHaan: “Life is all about balance. Because of my job and the situations I’m thrown into, I go through some pretty intense days, so I try to balance that out with a lack of intensity when I’m not working.”

Mia Goth: “I agree with that.”


How do you find balance?

DD: “I just hang out with my family. I really like doing manual labor, like gardening or chopping wood or laying stones. I like golfing a lot. I just try to keep it simple.”

MG: “I like to hang out with friends and family too. I like to read. I like to garden, too, actually. I like to cook. I’ve gotten really good at cooking spaghetti squash. You put the squash in the oven, then take it out after 45 minutes and fork it. It’s like spaghetti, but super healthy. Then you cook some buffalo and that becomes like your Bolognese, and you put some tomato sauce [on it], sprinkle it with cheese, and you’ve got a meal. It’s really handy because then you have food for about three days, so you don’t have to worry about dinner for, like, two nights.”

If you could bottle up a scent, what would it be?

MG: “I’d say sea salt. I grew up in Brazil for a while, and that’s what a lot of my first memories are of. Whenever I have that scent of sea salt from somewhere, it always takes me back. There’s something really comforting about that, and it makes me feel very safe.”

What’s your favorite thing about summer?

MG: “How long the days seem to feel. I love the warm nights and being outside and it’s still light. At least in London it’ll be light at, like, half ten at night. Just being with friends and having a good dinner together, and catching up and not having to worry about any responsibilities. I think it’s definitely something that’s really special about summer.”

DD: “I agree about the length of the day, for sure. I also like how people come out in the summer. Like you go to the park where I live in Brooklyn, and it’s so alive and there are so many kinds of people doing all different things. That feeling is so electric.”

What about your least favorite thing about summer?

MG: “Getting sticky, like going underground on a train and it’s humid and there doesn’t seem to be any wind. You’re just stuck in it, and all you want is to have a shower and you can’t.”

Do you have something that you like to do in the city during summer?

DD: “I just like eating outside, having some margaritas, some tacos, you know? Some oysters.”

MG: “It’s the simple things. I like hanging out in parks in summer in the city. In London that’s a very British thing to do because there aren’t any beaches, so that’s where everyone goes. There’s something quite nostalgic about that.”

Fragrance
More From the series Celebrity