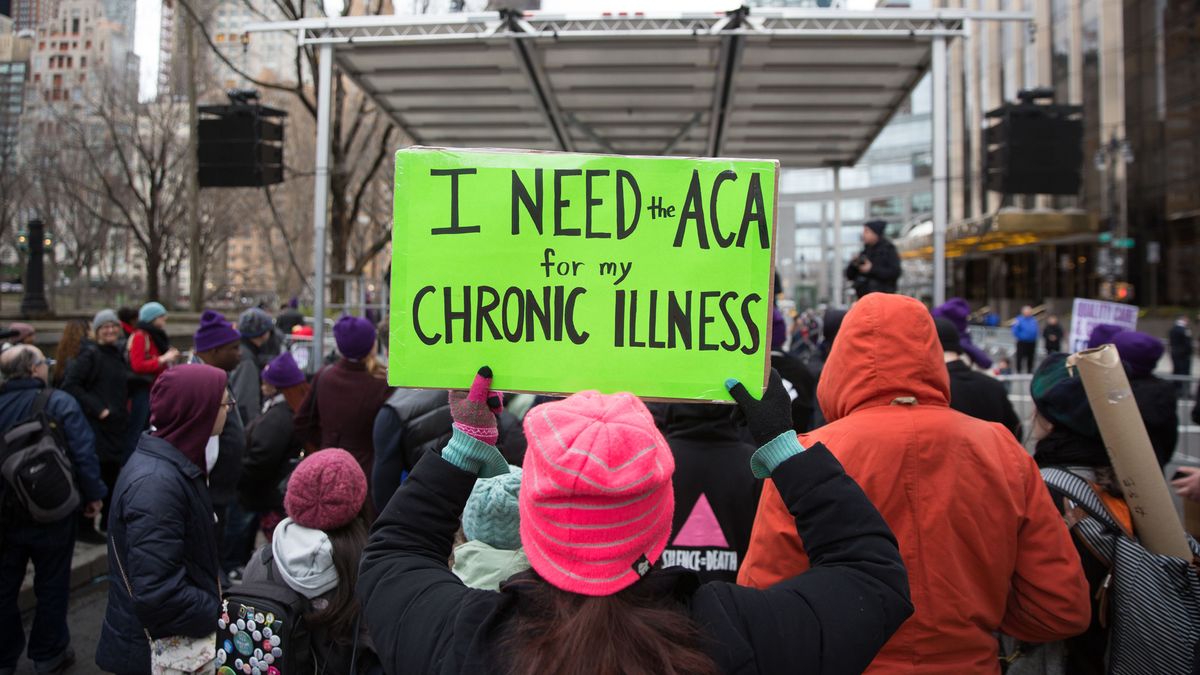 “I don't want to have to decide between treating my condition and being able to afford housing, or food.”

I’m a 32-year-old woman, an attorney at a mid-size firm in New York, and I have a preexisting condition called Multiple Sclerosis.

After Donald Trump was elected President, I worried about how his health care policy could negatively affect me. Currently, if you have a preexisting condition like mine, you have access to reasonable coverage under the Affordable Care Act. The Senate’s newest draft of the American Health Care Act would allow states to ask permission to reduce required coverage, thereby giving insurers discretion over what they offer in their plans and what they charge enrollees. There is potential that the millions of people like me, who are considered high-risk in the eyes of insurance companies, won’t be able to afford health care.

I’m one of the 159 million Americans who gets health insurance through my job. I've never had a problem seeing a doctor or obtaining a prescription through my plan. I see a specialist every three months for a complete neuro exam and to evaluate my medications, as well as a yearly MRI to track the effects of the disease on my brain and spinal cord. I take a pill every morning and evening to manage my symptoms, and with my insurance it doesn’t cost me anything. Since I live in a non-doorman building, every three months I have to assume the risk of $80,000 worth of medications being left on my doorstep without a signature.

Before the Affordable Care Act, there was a loophole that limited the amount of health benefits someone could receive in their lifetime. For most plans, that cap was around $1 million or $2 million dollars—after that, you’re basically on your own. Who knows what scientific developments there will be in the next few decades, but presumably, I will take medications for the rest of my life. At $80,000 a month, it adds up quickly. It costs my insurance $320,000 to cover the drugs that alleviate my symptoms for one year; In ten years, it will be $3.2 million. That $1 or $2 million mark seems far-off when it’s in the abstract, but for the 400,000 people in the United States living with MS, implementing a cap could mean a steep decline in both health and quality of life.

I'm an average person, and I don't have an extra $5 million dollars lying around in case I max out of my health coverage. I don't want to have to decide between treating my condition and being able to afford housing, or food, or just live my life like a regular, healthy person. No one should have to make the choice between the care they need and their livelihood.

I believe the people who want the ACA replaced don't want to pay for insurance coverage that they think they don't need, and that Congress is playing off those desires mostly for political gain. What people don’t understand is that by insuring the whole population, rather than just the ‘really sick people’ it diversifies the risk and can lower the cost for everyone. Frankly, anyone who thinks they don’t need comprehensive coverage—wait until the day your lip goes numb; You can wake up and suddenly everything is different. I was a generally healthy person until I was diagnosed at 30, and all of a sudden I have an incredibly expensive medical condition. No one is prepared for something like that emotionally, but at least financially, you can have the safety net of your insurance. For now at least.

I hope people take a second to pause and realize that this legislation isn't just going to affect the person with cancer or some more obvious medical condition. It's not just the elderly or the outwardly sick. It could be you in a few years. Or it could be your significant other. Or your sibling, your parent, your child. For myself and for a lot of people with autoimmune disorders like MS, we don’t look sick. When people talk about limiting care, or lifetime caps, they don’t always realize that the person standing next to them on the subway or behind them in the checkout line will be directly affected by these policies. Myself and the millions of other people living with preexisting conditions, from MS to asthma, need insurance that won’t suddenly disappear because we ultimately cost too much. I want lawmakers to remember that although our symptoms are nearly invisible, we, the people behind the diseases, are not.

You can read about the Senate’s new draft of the American Health Care Act here.

As Told To Hannah Baxter