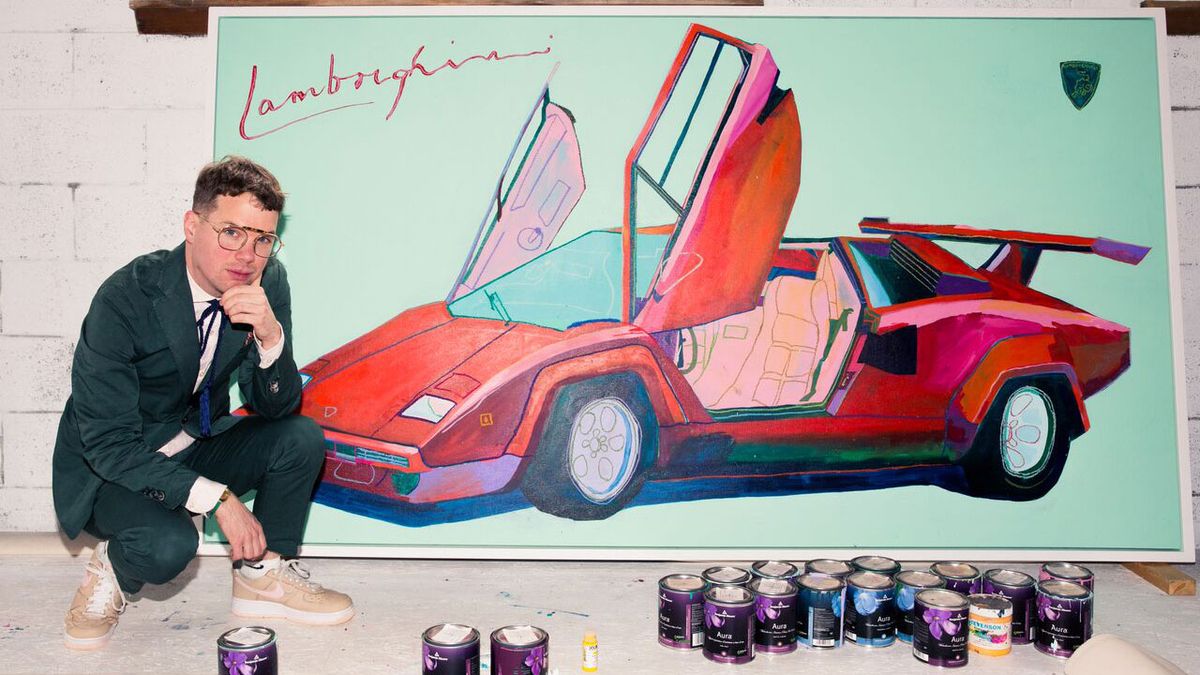 His paintings are luxury objects about luxury. Yes, you’ll want to buy one.

Take a look at Andy Dixon’s paintings, and it’s clear that while having a lot of fun (the bright pink! the glaring logos! the rambunctious subject matter!), the artist is also clearly making a point. The Vancouver-born-and-bred artist (he splits his time between his hometown and New York and is soon making the move to Los Angeles) started his career, as a teen no less, as a successful punk musician. Now he paints subjects that reflect on the bourgeois lifestyle—lavish interiors, knock-off Chanel and Versace clothing, neon simulacra of Old Masters, polo matches—in washes of bright colors. His raison d’être? To examine the aesthetics of value and what we deem to be expensive, including the luxury objects he’s making himself: his paintings.

We visited Dixon in his Vancouver studio, where he greeted us in a signature pastel suit (a version of which he wears every day), and talked to him about how he landed on a Nike sweatsuit as his painting uniform of choice, why he thinks Gucci’s Alessandro Michele is a genius, and how his patron, Charlotte Dellal, is helping him with his latest project.

1 / 23
“It was a really long and organic transition from music to art. It would be erroneous to say I wasn’t painting before; I was, just casually. It also felt like a hobby, whereas music was the career. That switched. I was always into visual art—even when I was eight, I was drawing comics. Then I got my first guitar when I was 10, and I got into bands. But bands need a visual identity, we needed album covers and stickers and stuff, and since I was the one drawing all the time, they elected me to do that. That continued for 20 years. I did it for other bands, and it snowballed. There’s a tie to the music and arts community. Suddenly I was showing works in the same DIY spaces that I played in. There’s a lot of cross-pollination. One day, my hobby and career switched—and that was a choice, probably about six or seven years ago.”
Part of the series: