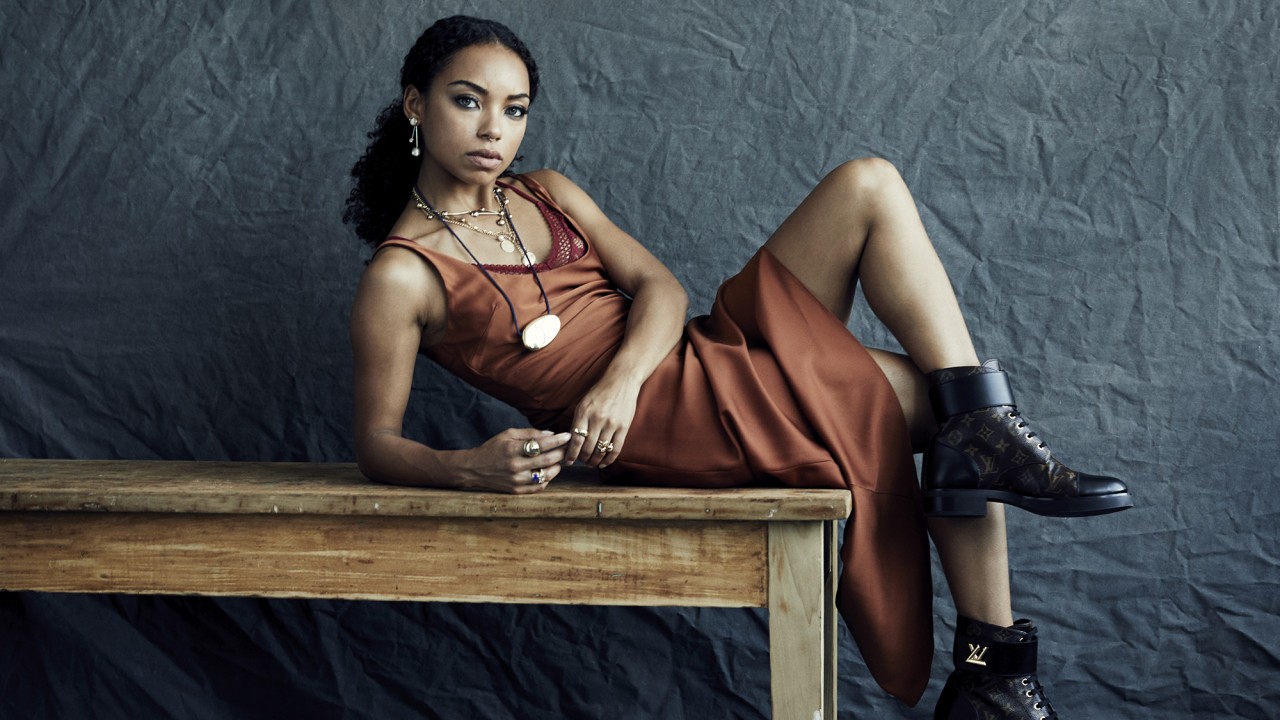 Forget Horoscopes—Logan Browning Has a Love of Numerology

The “Dear White People” actress talks the meaning of the number 27, diversity, and how her hair is an accessory.

It won’t take you long to become a super fan of Logan Browning. You’ll likely start out in awe of her talent, something that’s clearly on display in the Netflix hit Dear White People. Then you’ll find out she’s an activist and a genuinely sweet and down-to-earth person. We should also probably mention that it’s impossible for the girl to take a bad photo (the evidence of which you’ll find once you scroll).

But enough of us fangirling—it’s time for you to get on our level. Continue reading for seven things to know about Logan, and (fair warning) prepare to become very interested in numerology afterward. 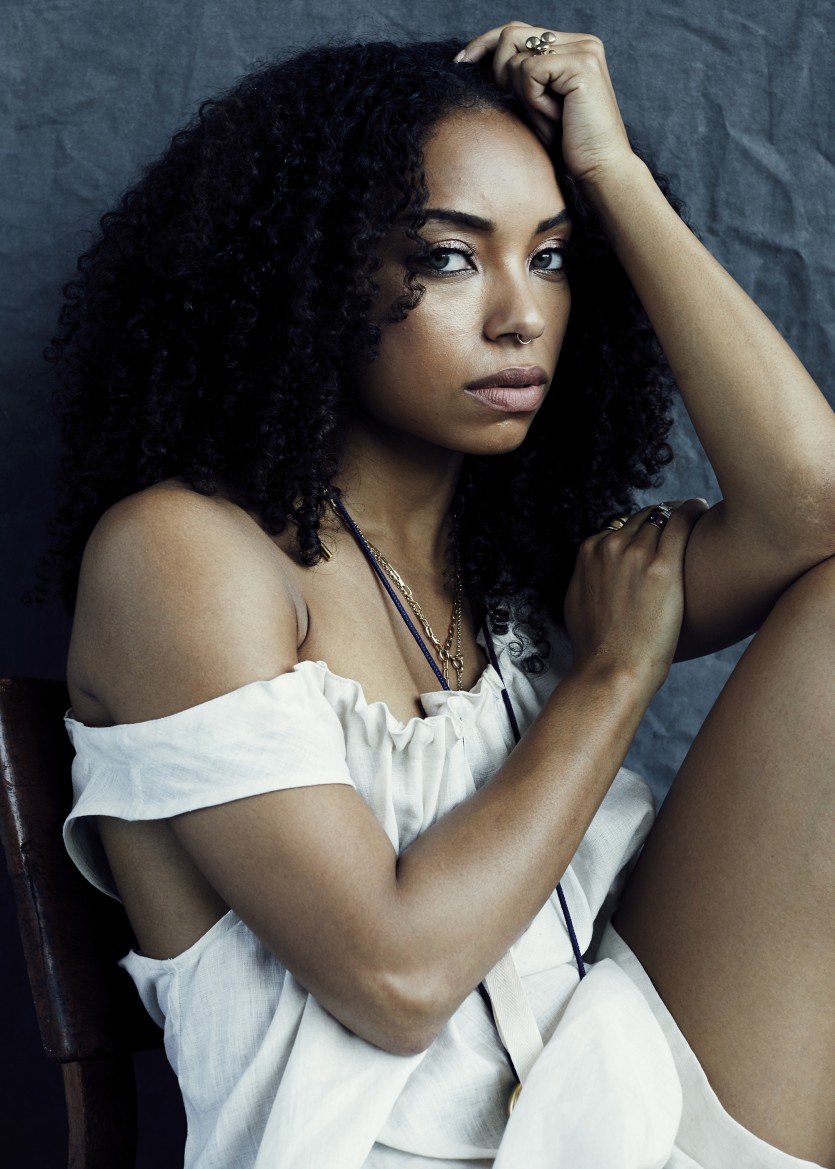 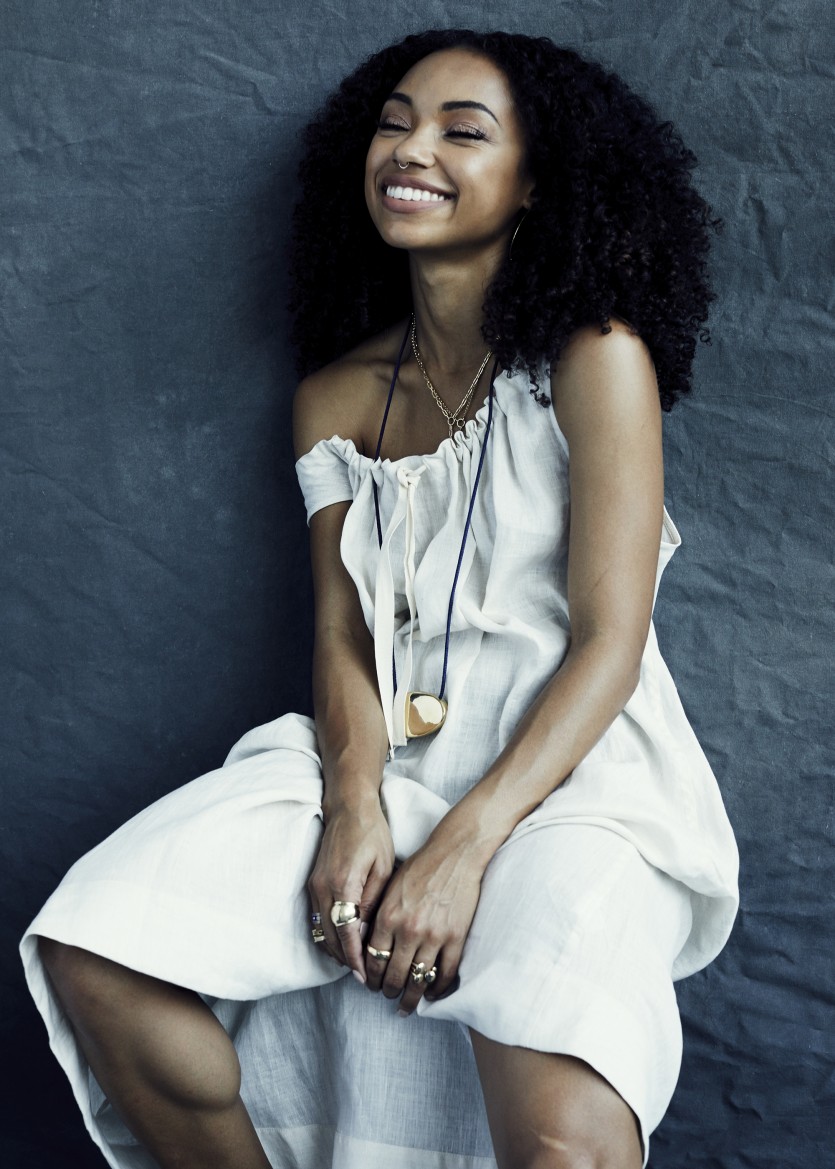 2. She Wants to See More Diversity in Hollywood

“I want to be a part of this movement of creating really impactful work for people to showcase their talents. We’re in this time of diverse actors ethnically, and in addition to that, I’m really interested in people with special needs, hearing impairments, vision impairments, the autism spectrum. Just people who exist in our world, who we see every day, and their stories don’t get told from their perspective. They’re given smaller parts because I guess Hollywood doesn’t see them as capable. But I think, in the same way that Hollywood is seeing how diverse actors have so many more stories to bring, they would be surprised to see the range of abilities that special needs people can bring to stories.” 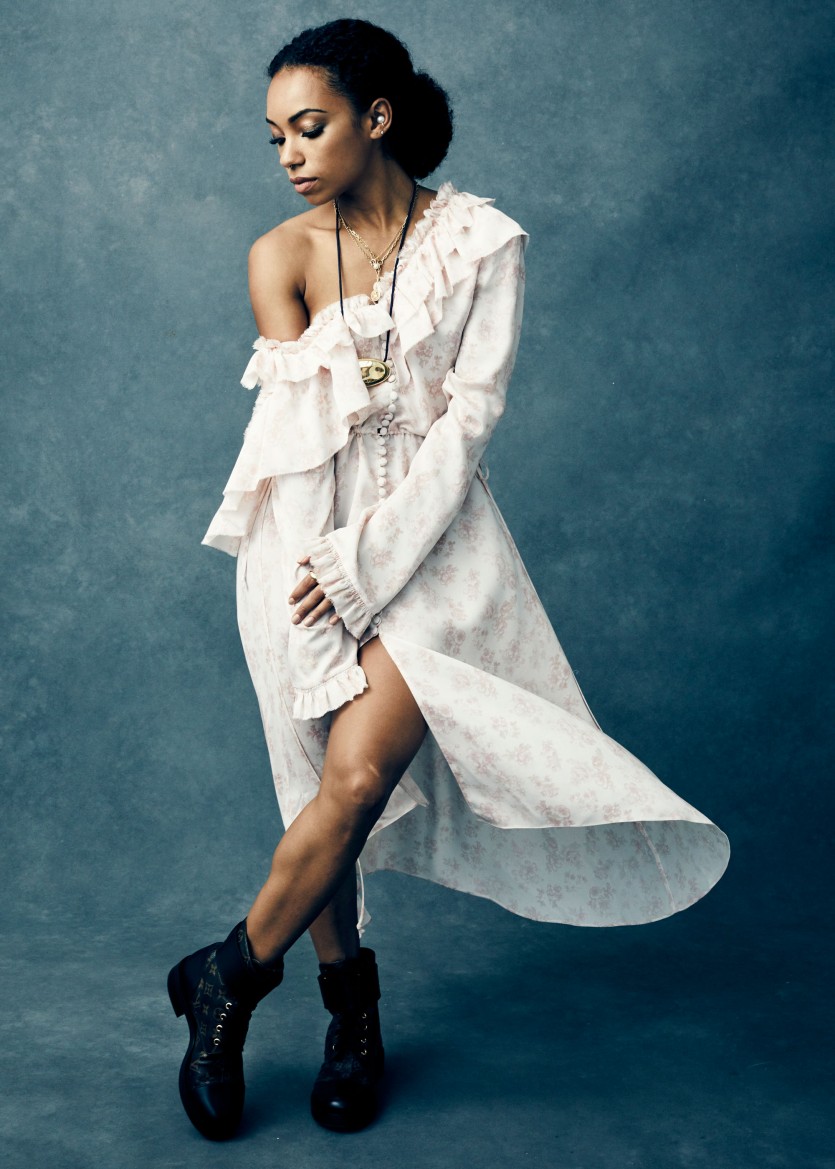 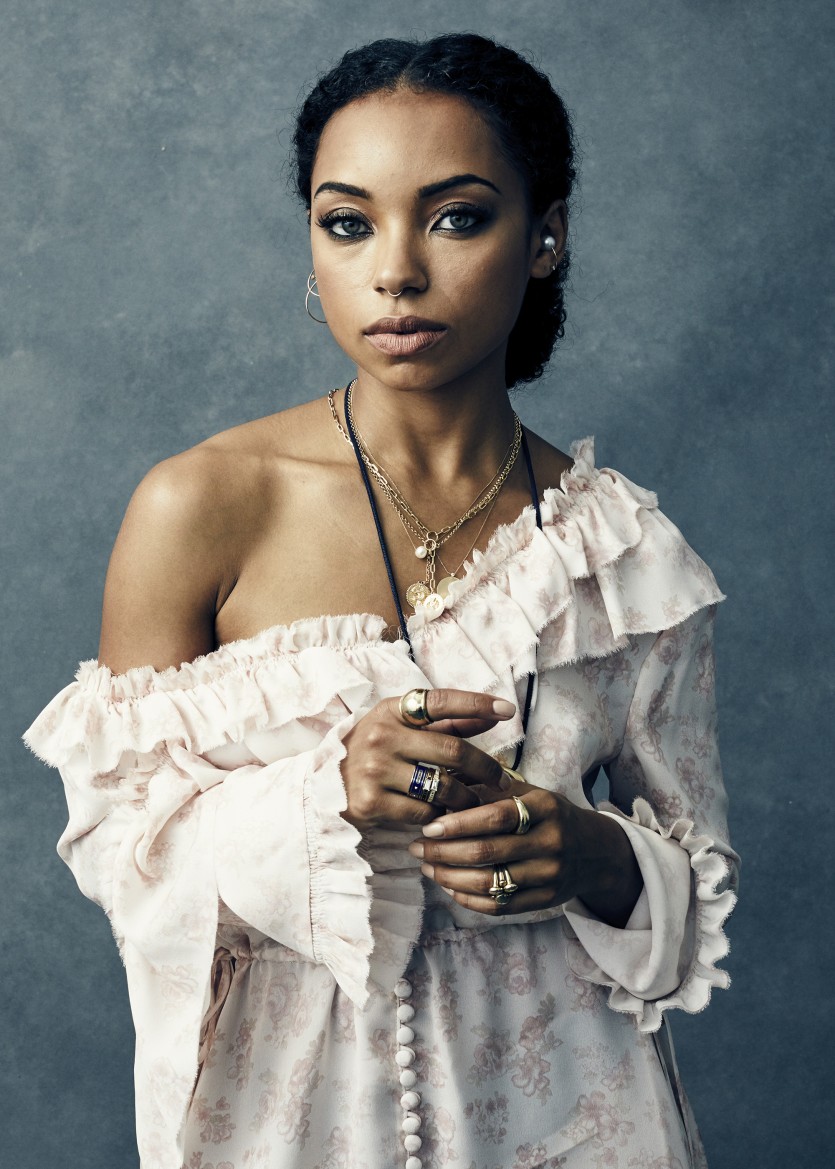 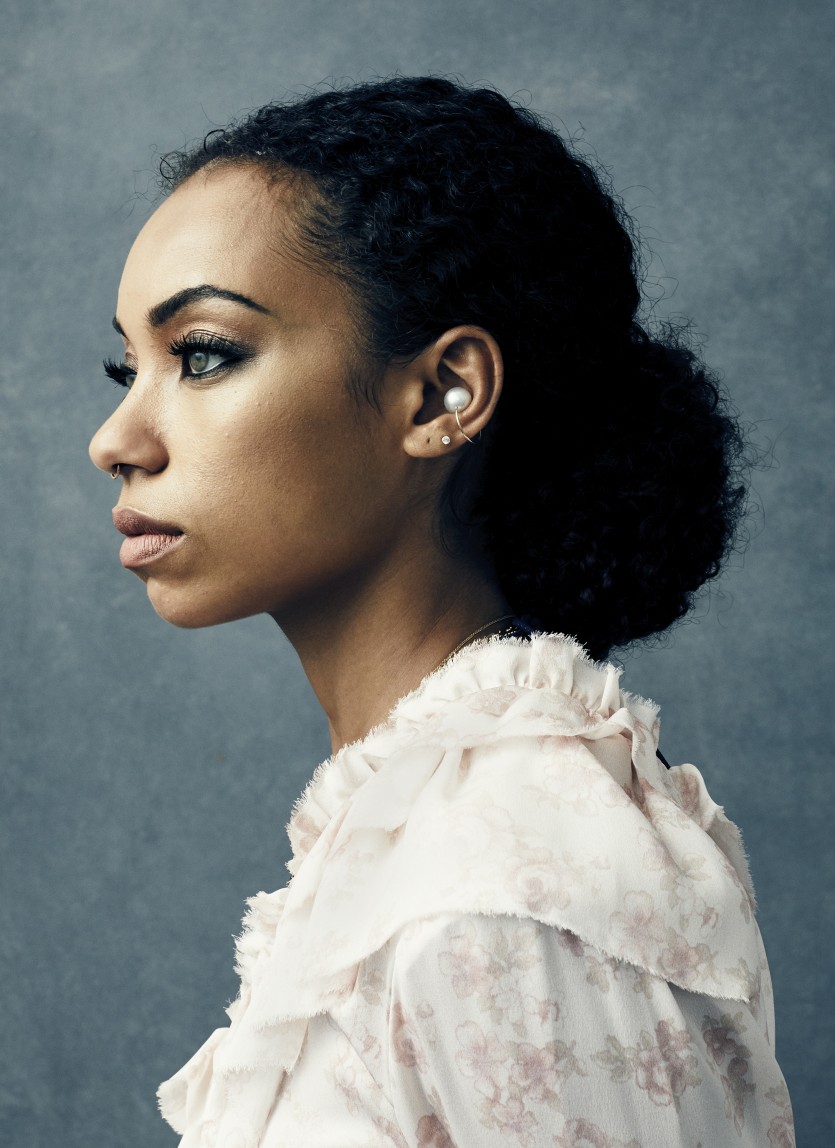 “To me, it’s similar to a tattoo or having a bracelet with a certain gem on it. The number 27 spoke to me. I had been struggling with the idea of being the star of a show, because it’s an ensemble cast but people would continue to call me the star. However, on the red carpet there was a moment where one of the photographers said something like, ‘Find your light.’ That was a phrase that a dear friend of mine, Stephanie Moseley, who was tragically taken from us a few years ago, used to say. She had the best selfies. She is the most gorgeous person I’ve ever met, inside and out. It was not until that moment when someone said it, and probably meant it in the way of finding your physical light, that I realized that saying goes beyond, and actually means to just shine in your space. By being brilliant and shining, you illuminate a path for other people to do the same thing. When I realized that being a star isn’t about you, it’s about shining for everyone else and helping other people, in that moment—I am 27 now and it was on April 27th—it just all kind of sunk in for me. Similar to finding my light, I found my number. I looked up the numerological meaning of 2, 7, and you put them together, 9, and I really felt a connectivity to what those numbers represent. 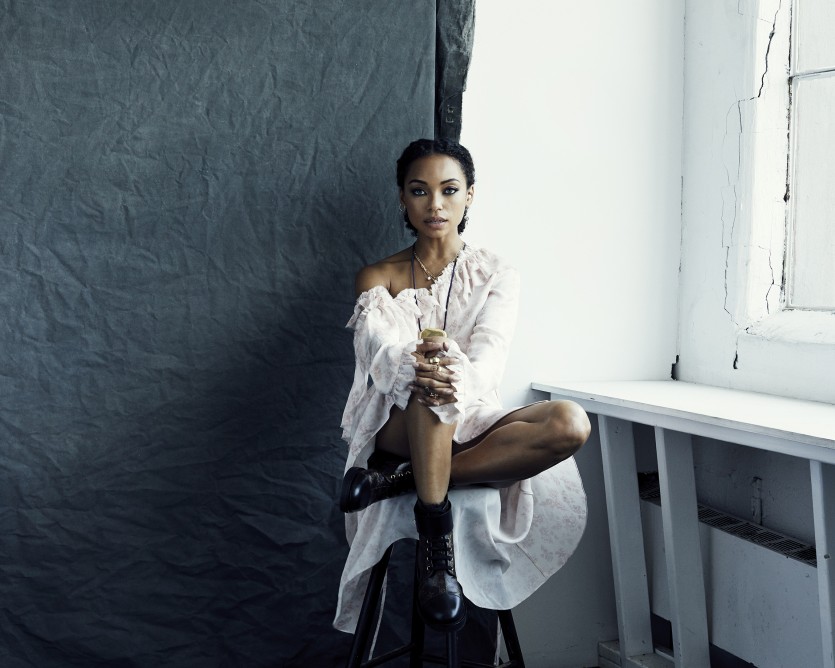 4. She Learned How to Dance for Hit the Floor

“I always wanted to be a dancer. It is a really strong, feminine, graceful, athletic, mystical artistry. [For the show] I just took ballet for 8 months, and jazz, hip-hop, and jazz-funk, and heels classes. I fell in love with it. The cool thing about dancing is you help people see the music and you help see the rhythm of a moment and see the lyrics of a song. You are giving your physical vessel to create that. I think that is a powerful contribution.”

“A body in motion stays in motion. Any time I’ve felt depressed or sad or bored, it’s because I’m sitting in one place. I love yoga, I love pilates, I love boxing, I love running. My friend Courtney is teaching at this place called Rise Nation, and it’s climbing machines, and it kicks your ass. I just started indoor rock climbing. It’s a great mental workout, too. I love things that are stimulating your bravery muscle and decision-making muscle.” 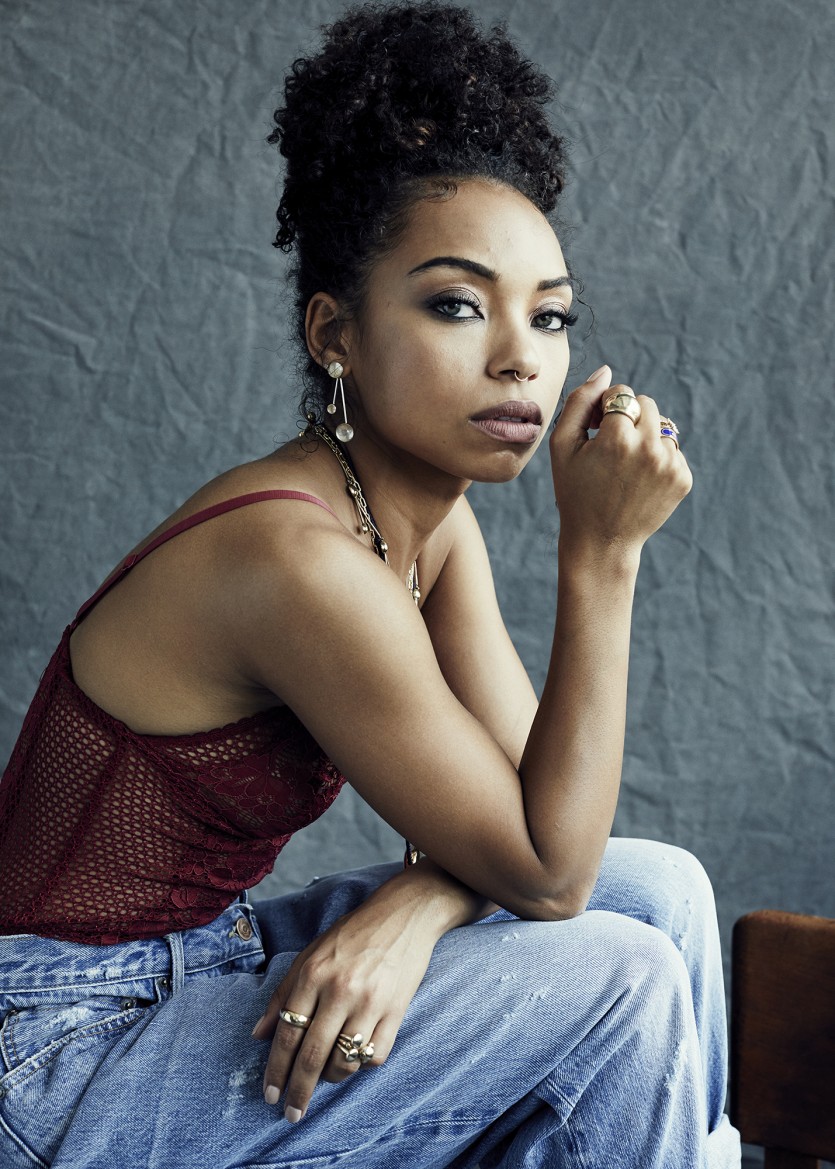 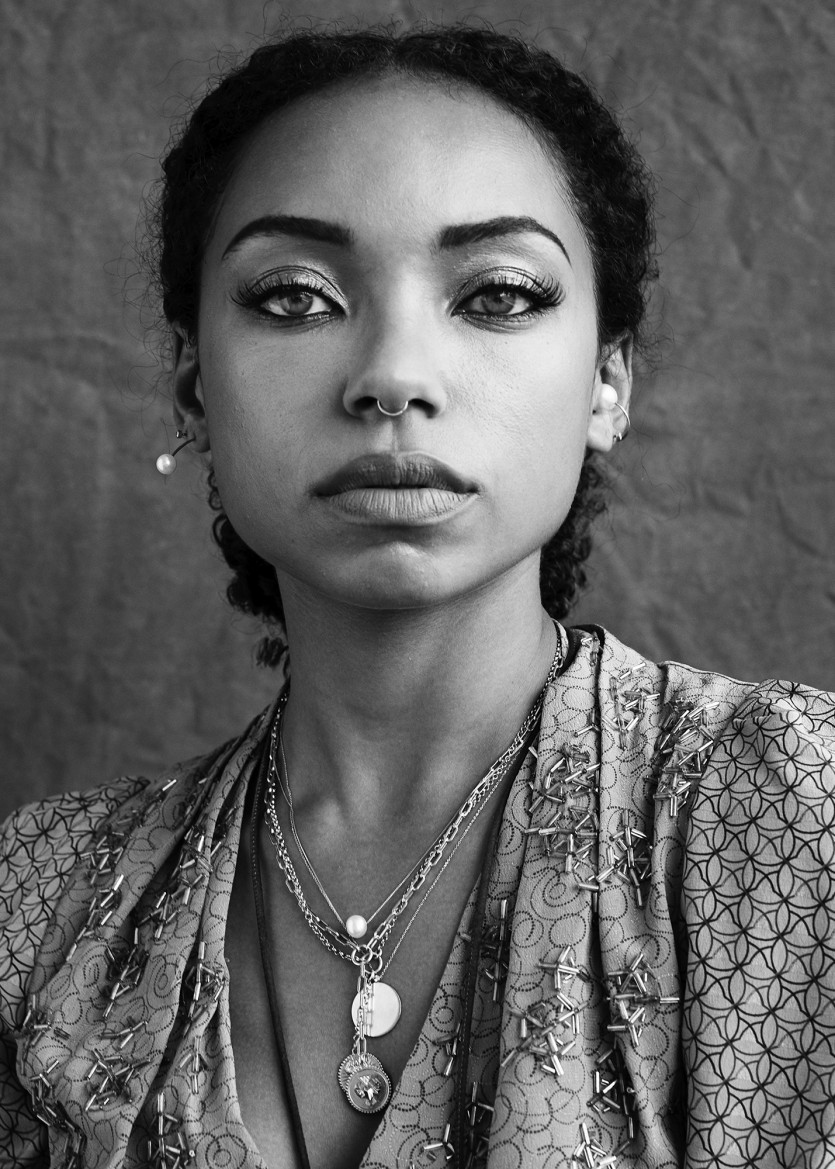 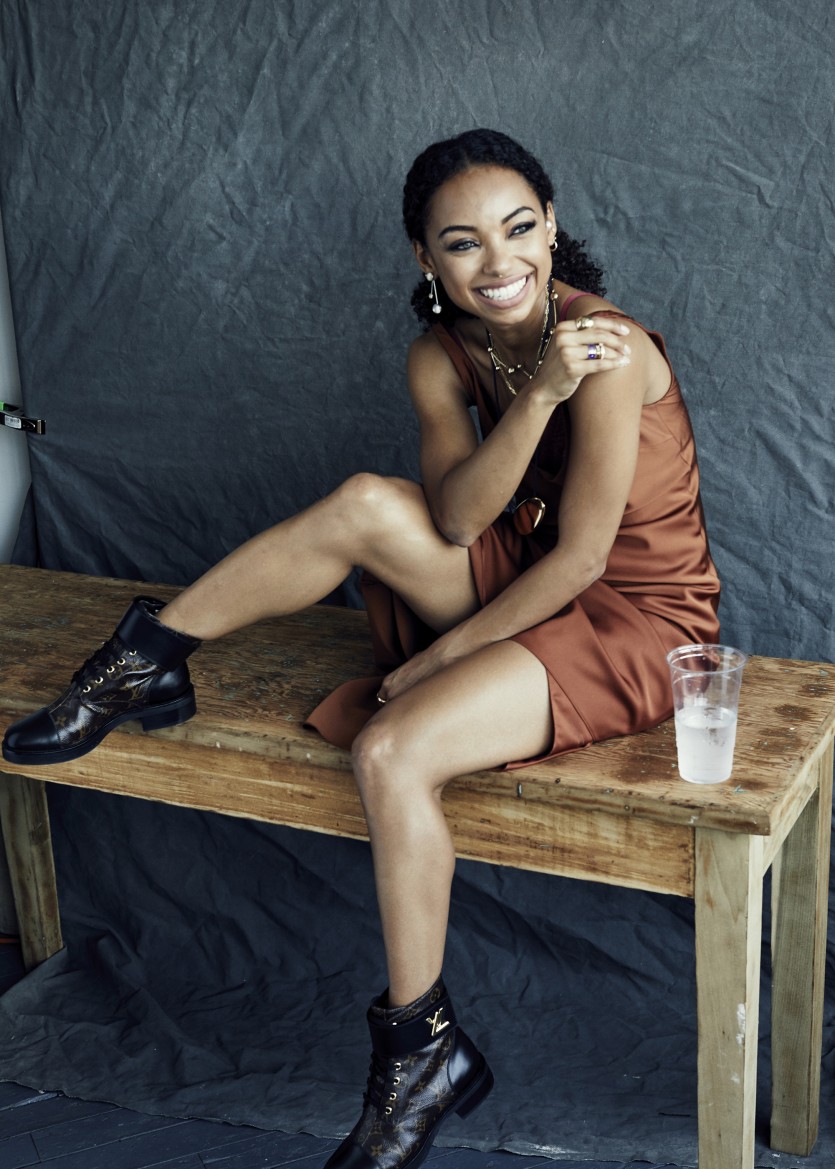 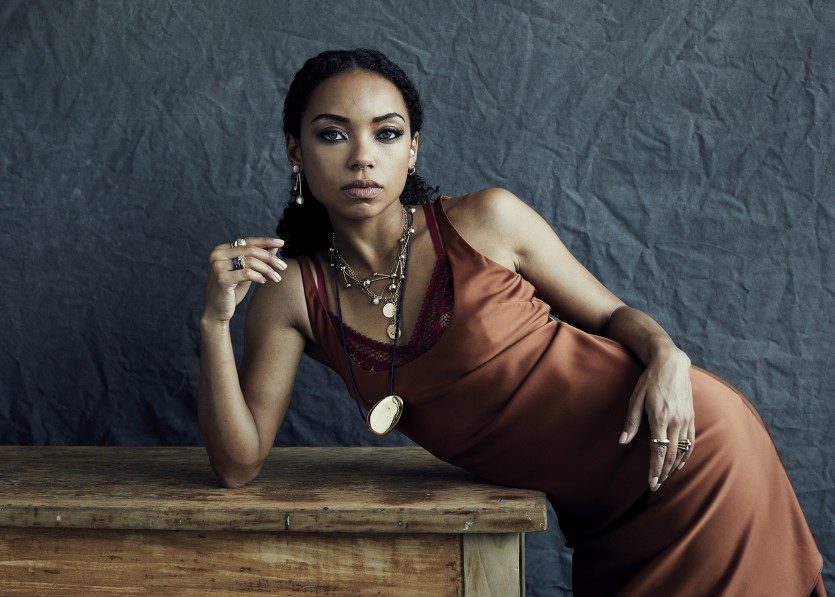 6. She Has Her Karaoke Go-Tos

“In my head, I want to be a singer, but then I record myself and hear it, and I’m like…‘Maybe not today.’ I have two go-to [songs]. The first one is Carrie Underwood ‘Before He Cheats,’ which I get very into. The second one is ‘Out Tonight’ from Rent, and I’m full Mimi and whipping my hair.”

7. She Views Her Hair as an Accessory

“I do feel like my hair is part of me because it is such a specific texture and style. I didn’t always wear it like this, I used to straighten it, and I guess even then it was part of my identity. To quote India Arie, ‘I am not my hair.’ I would shave my hair off if I didn’t have such a big head. I think hair is an accessory, and I love playing with my hair and rocking my natural hair. It is the way God made me, and I feel like anytime we can embrace anything that our creator has touched, we should do that with full confidence.” 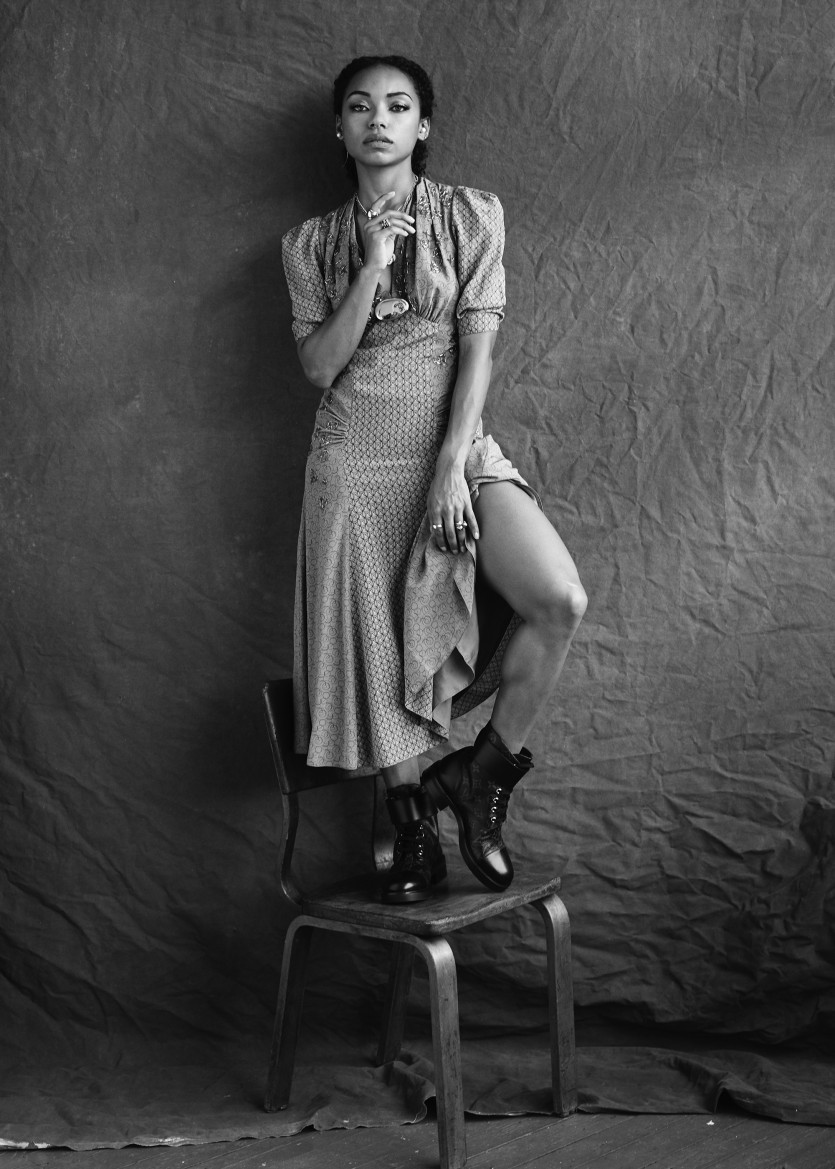 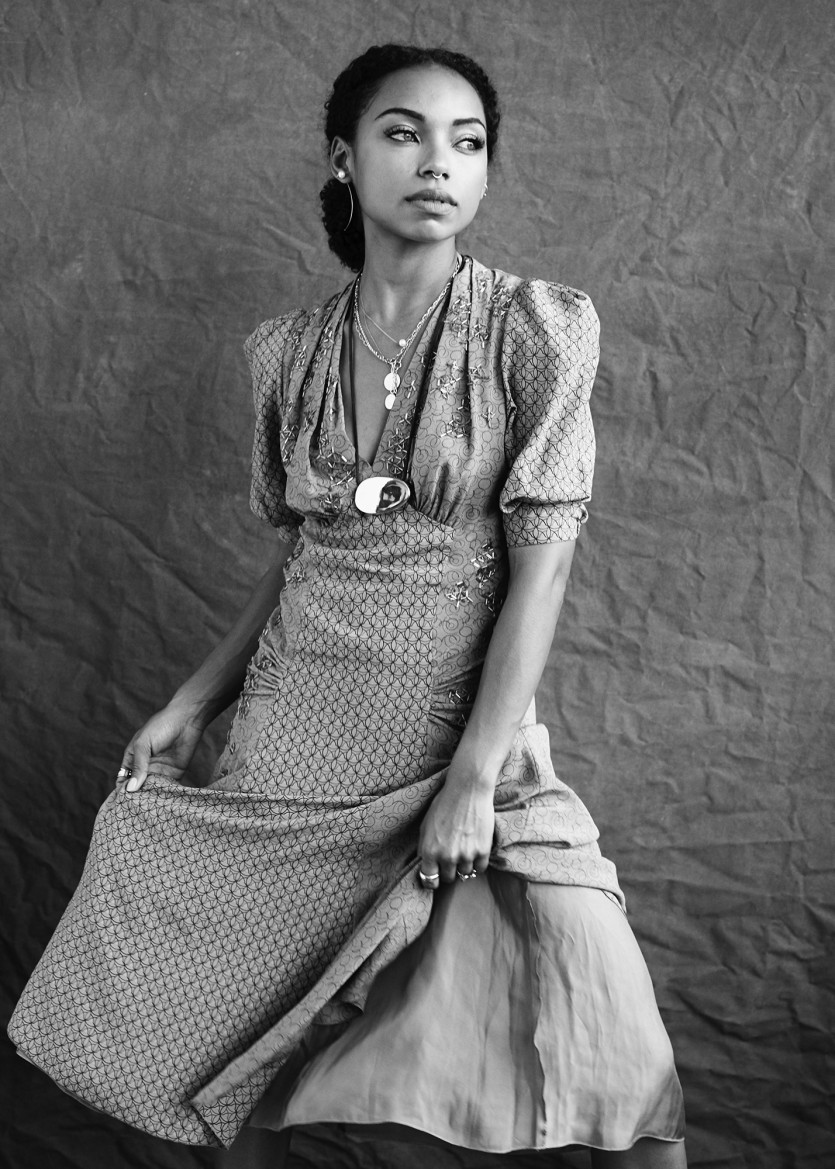