Plus, the best drugstore mascara and how a DIY attitude got her into the modeling game.

If you already follow Salem Mitchell on Instagram, you may have figured it was only a matter of time before she made an appearance here. We’ve truthfully been *dying* to feature her, but with Mitchell based full-time in her native San Diego, it wasn’t until a chance iCal sync in L.A. that we finally got face (get it?) and hang time with the model. Splayed out poolside on an uncharacteristically overcast day, we chatted about everything from coconut oil and how Mitchell got started in her modeling career, to the best drugstore mascara on the market. Eavesdrop on everything we discussed below. 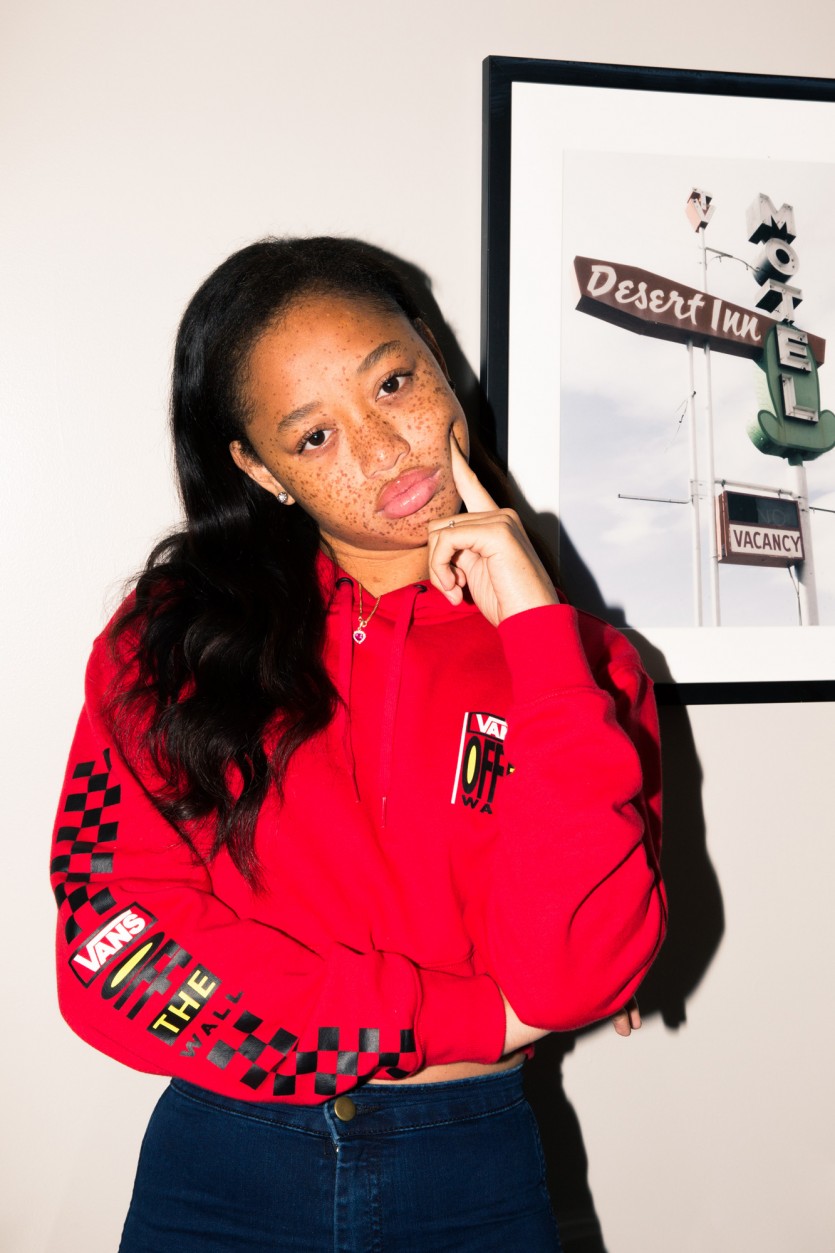 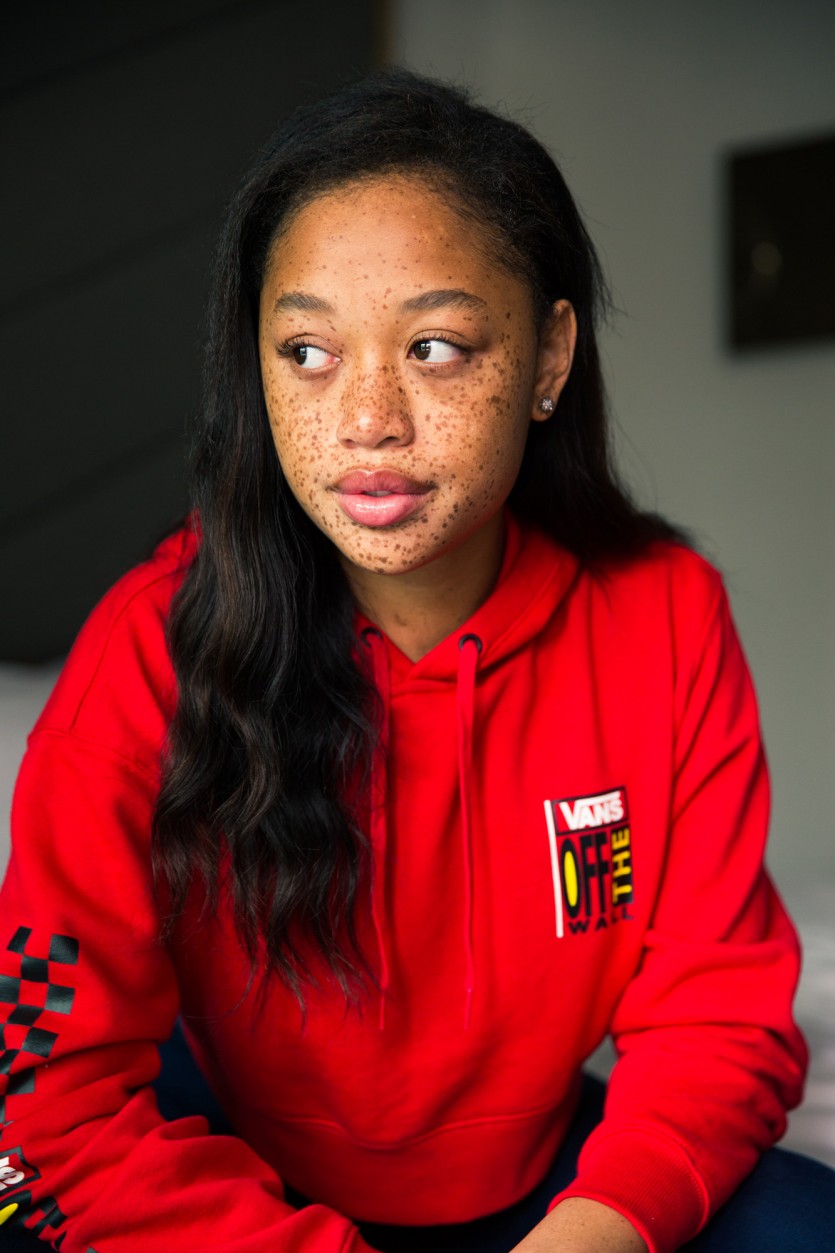 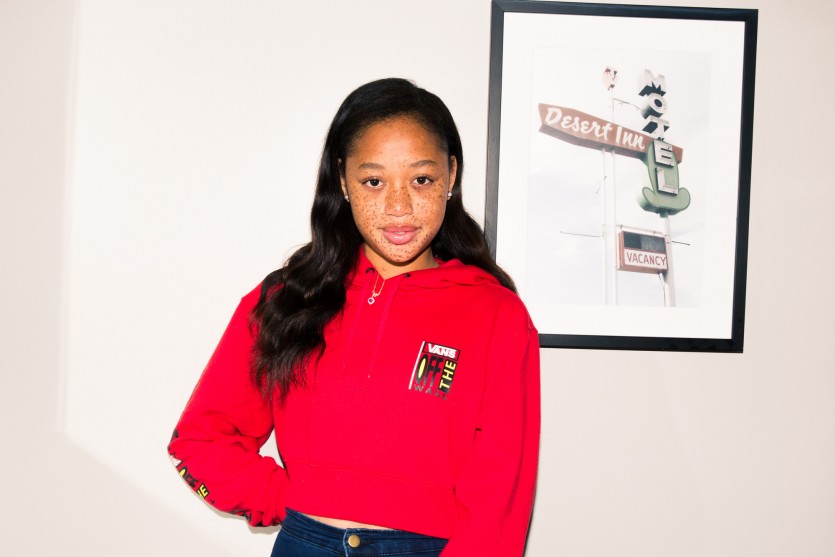 How she did her own thing when she didn’t feel represented:

“When I was younger, I would look on agency websites, and they didn’t really fit the way that I looked. I went to a performing arts high school and would collaborate with the photography majors on their project. My friends and I would arrange shoots at our houses. My following grew doing stuff on my own, having fun with my friends, posting stuff on social media, my following sort of grew in that sense.”

The photographer who led to her big break:

“People began reaching out to me. One of my [now] good friends, Mayan Toledano, DM’d me and was like, ‘Hey, I really want to shoot you for [lingerie line] It’s Me and You.’ She drove all the way to my house from L.A., and we ended up shooting in my bedroom. The photo shoot was for her website and for their brand, it was in Paper magazine. I got my first full page in a print magazine. I also did ‘100 Ways To Wear Gucci’ for Vogue.com, and she had told whoever was casting that that they should look into me. I ended up getting confirmed for that, and that was my first big trip.” 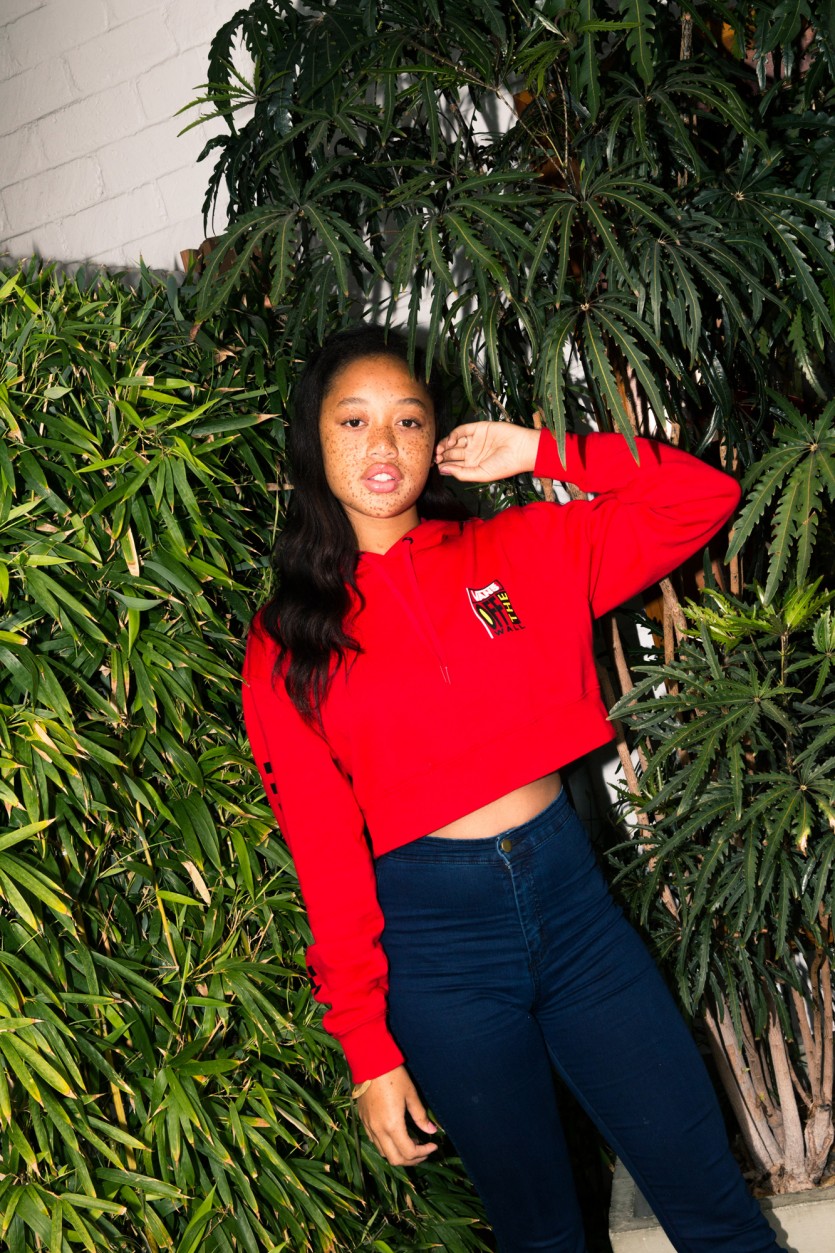 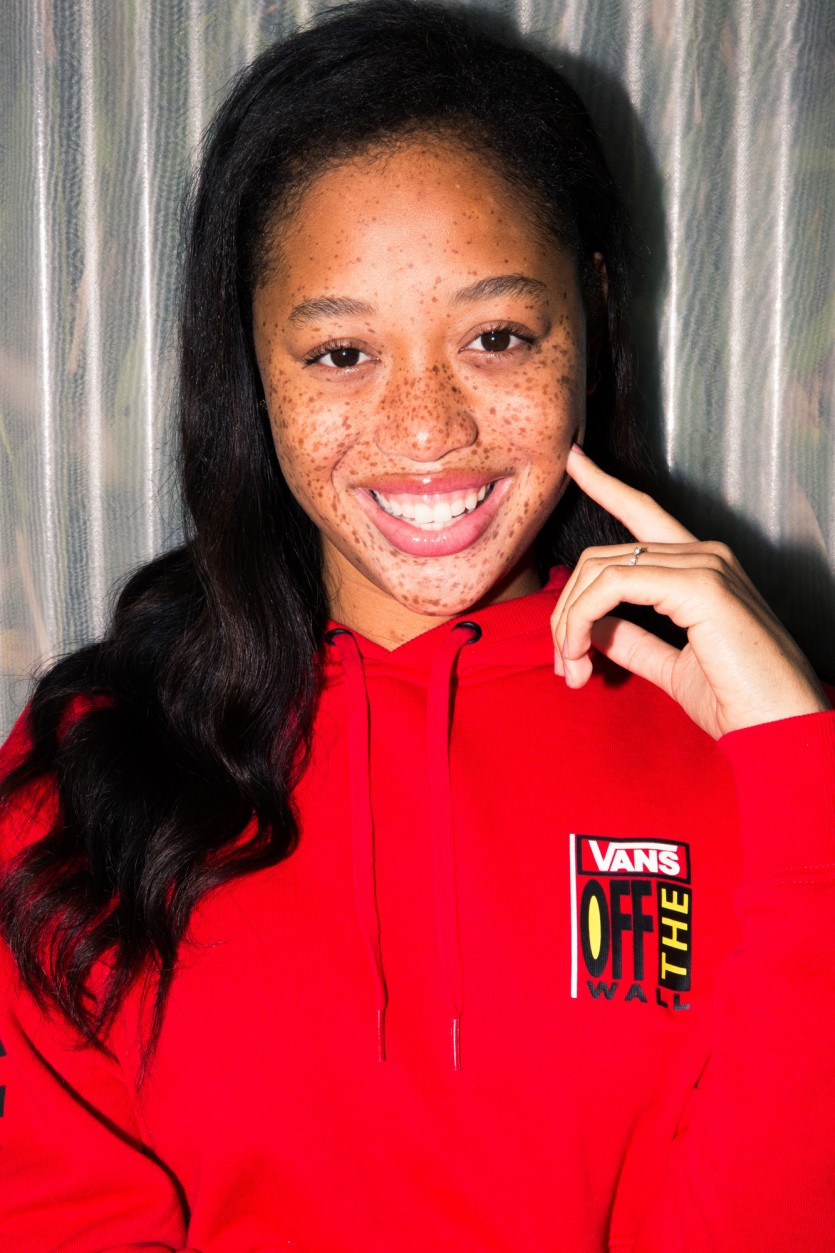 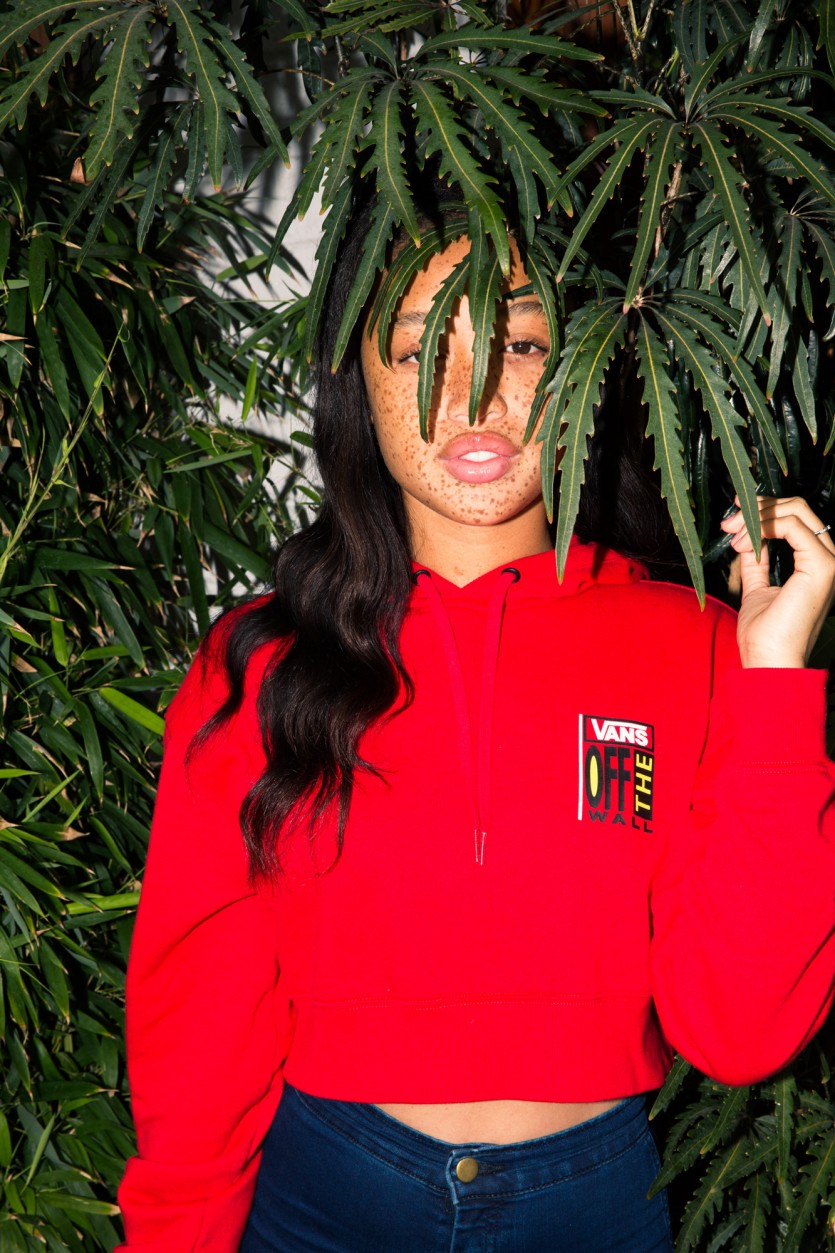 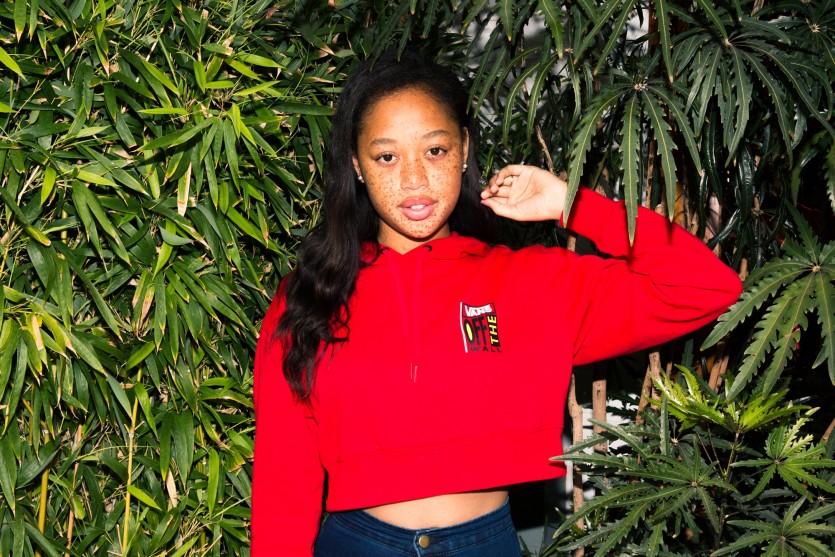 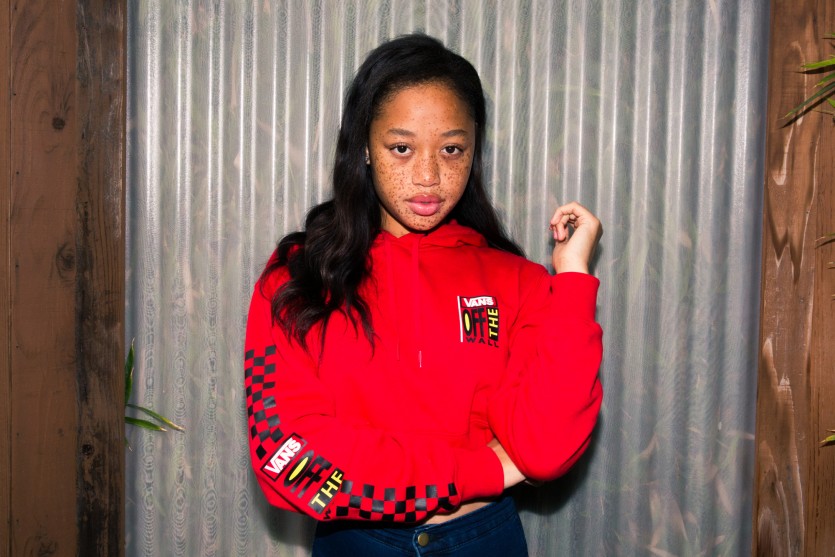 How she came to accept her freckles:

“Well, my mom has freckles. I grew up close to her and was like, ‘Well, if I look like her, then I’m normal. It’s not anything that interesting.’ At 12 or 13, you start to notice what people say about you. One time I went to the beach, and there were little kids, and I waved at them—they were pretty young, so I don’t think they knew any better—but they were like, ‘What’s wrong with that girl’s face?’ I just kind of laughed it off. There was a lot of that as I grew up.”

Why she’s never covered them up:

“My parents also didn’t let me wear makeup—not that I ever wanted to. They were just like, ‘You don’t really need makeup.’ I think, even if I wanted to, I wouldn’t know how to cover up my freckles, they’re so dark and there are so many.” 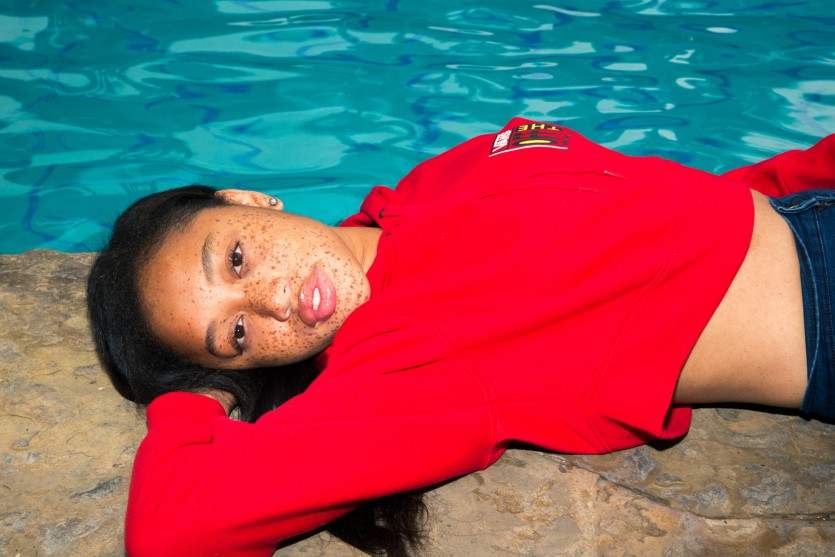 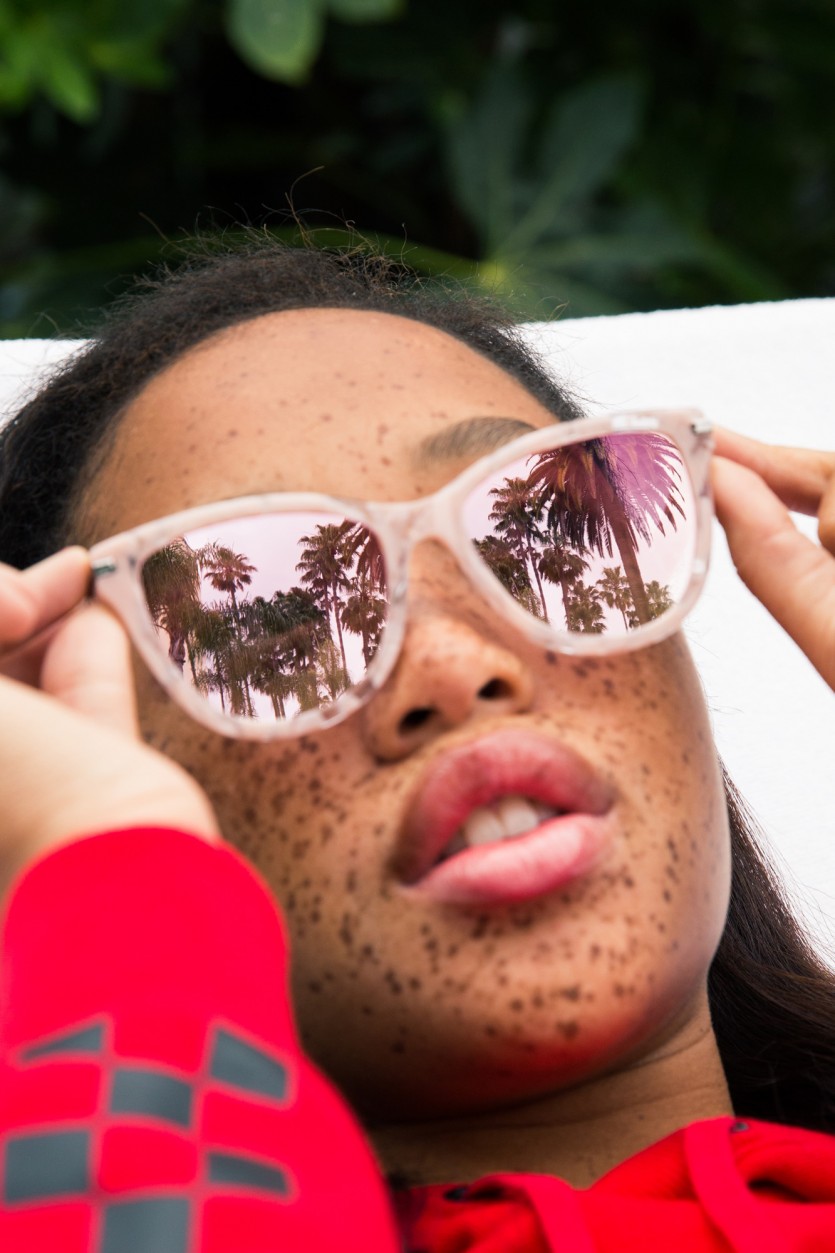 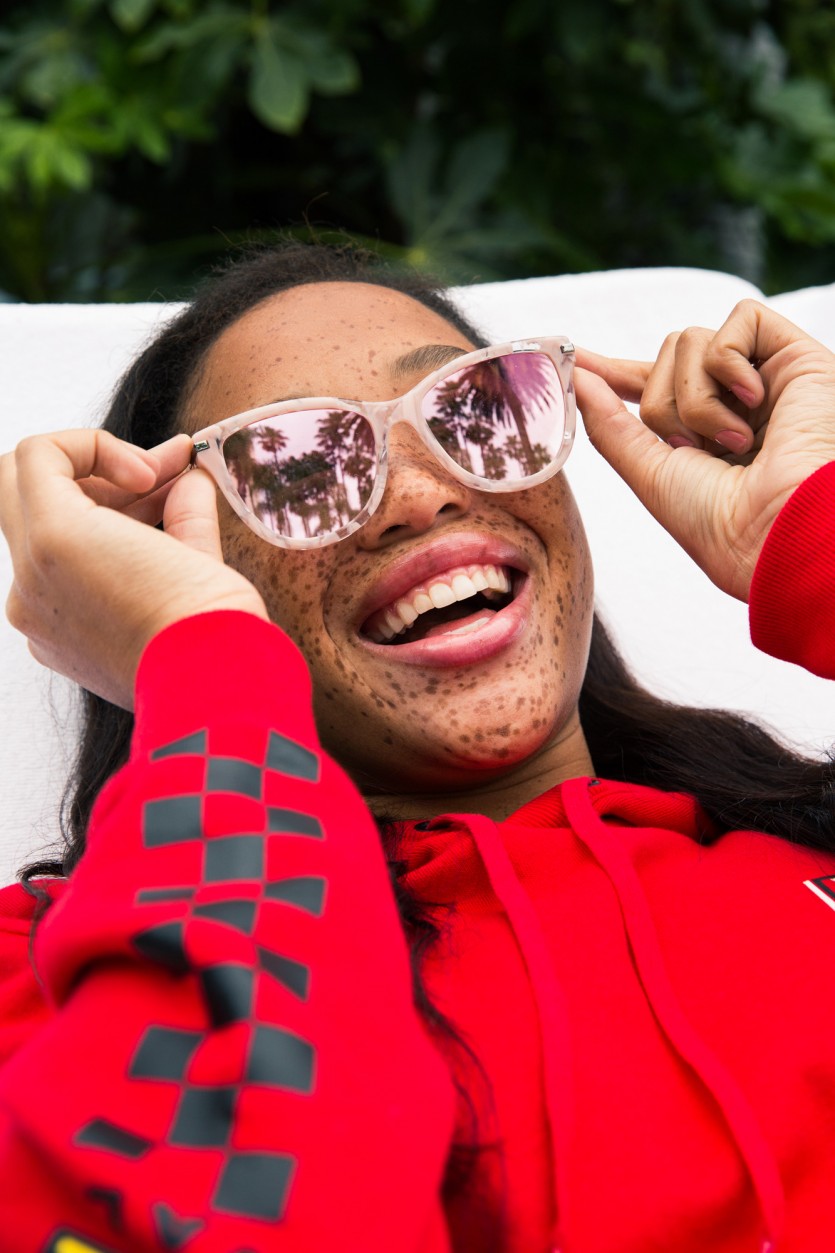 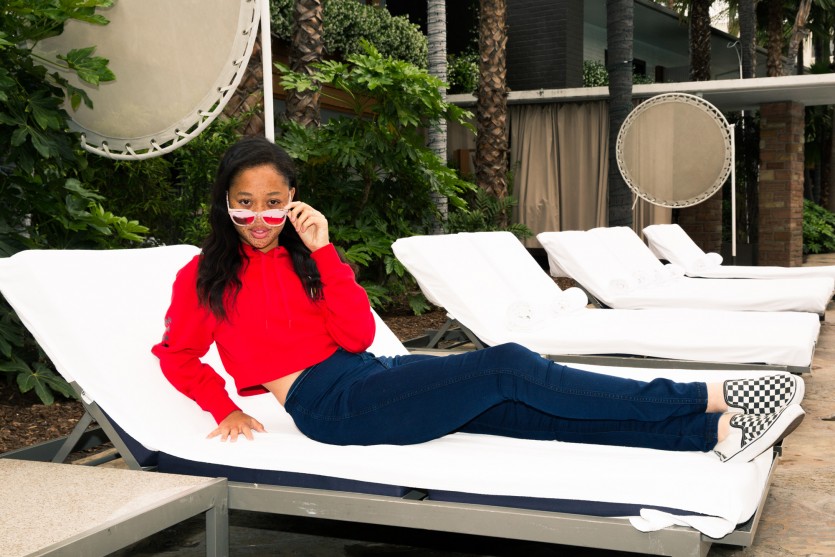 The beauty products you’ll find inside her makeup bag:

“If I want to spice up my look or do a little something extra, I really like L’Oréal Telescopic mascara. My lashes are pretty short, but they’re curly, and it makes them look really long. I just got the Glossier Cherry Balm Dotcom, and it’s a universal skin salve. I have big lips, and they get dry so easily—I like it because it’s so thick, my lips stay moisturized. I can use it on multiple parts of my body, too. I have this Milk Makeup blush—it reminds me of a really large chapstick, but it’s blush. It’s so easy to put on, and it looks really natural. I like ColorPop too, if I want to have a bold lip. I have the Hello Kitty collection, and there’s a really cool red lip in there.”

“I use a lot of coconut oil in my hair. And peppermint oil, which is good for stimulating growth. I use basic waxes and edge controls to slick my hair down to make sure it always looks neat. That’s pretty much it. I keep it pretty simple.” 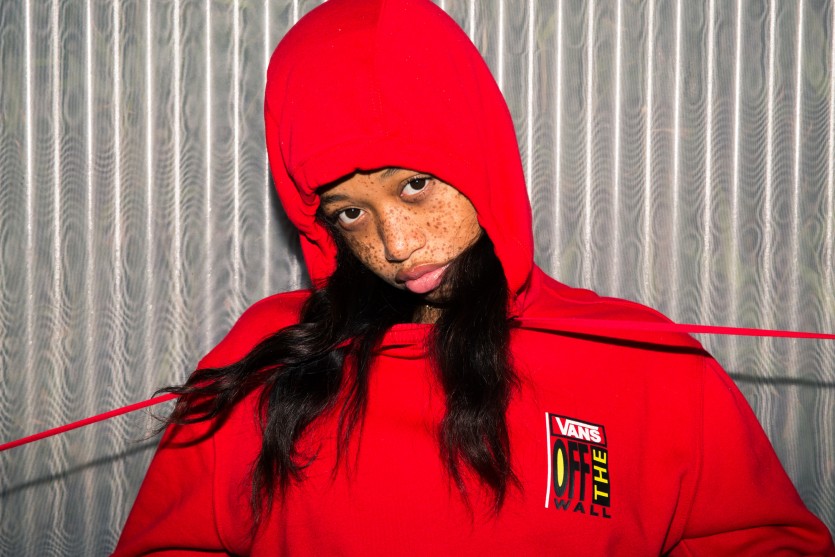 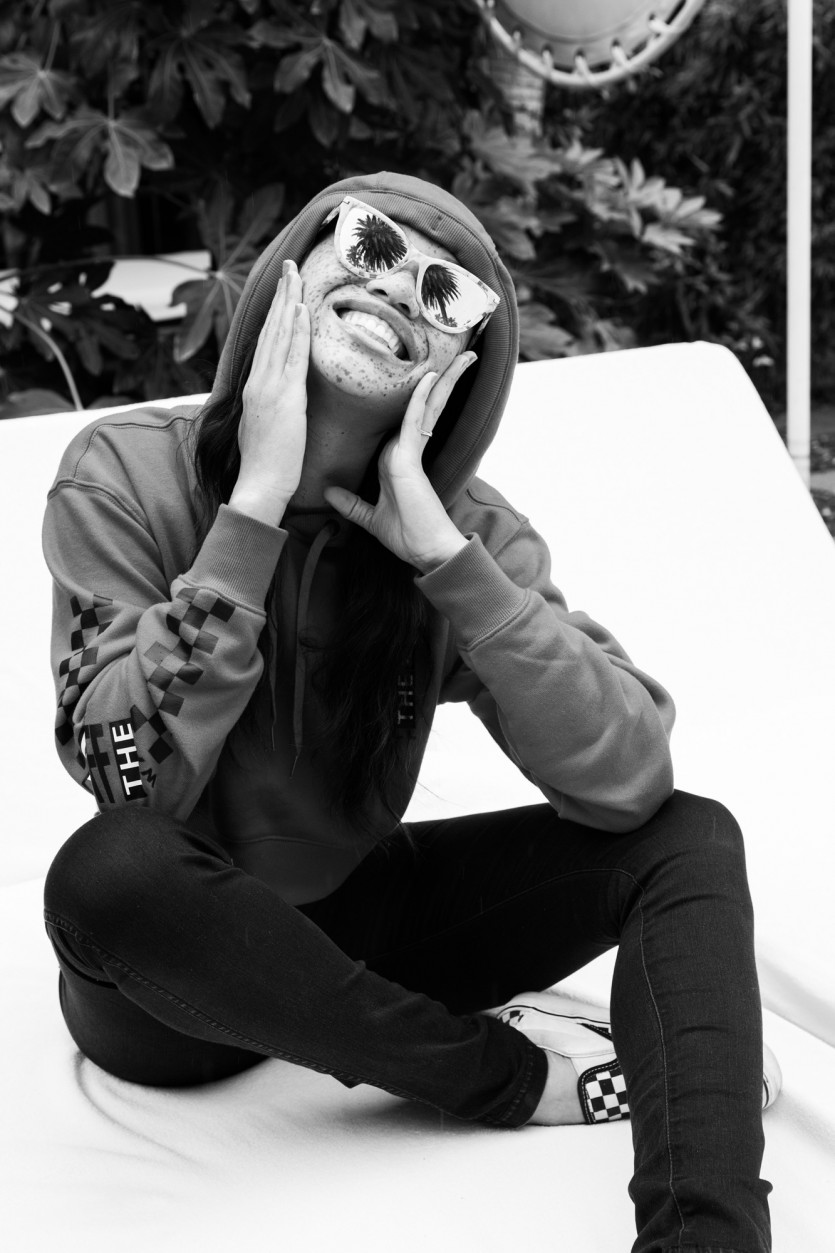 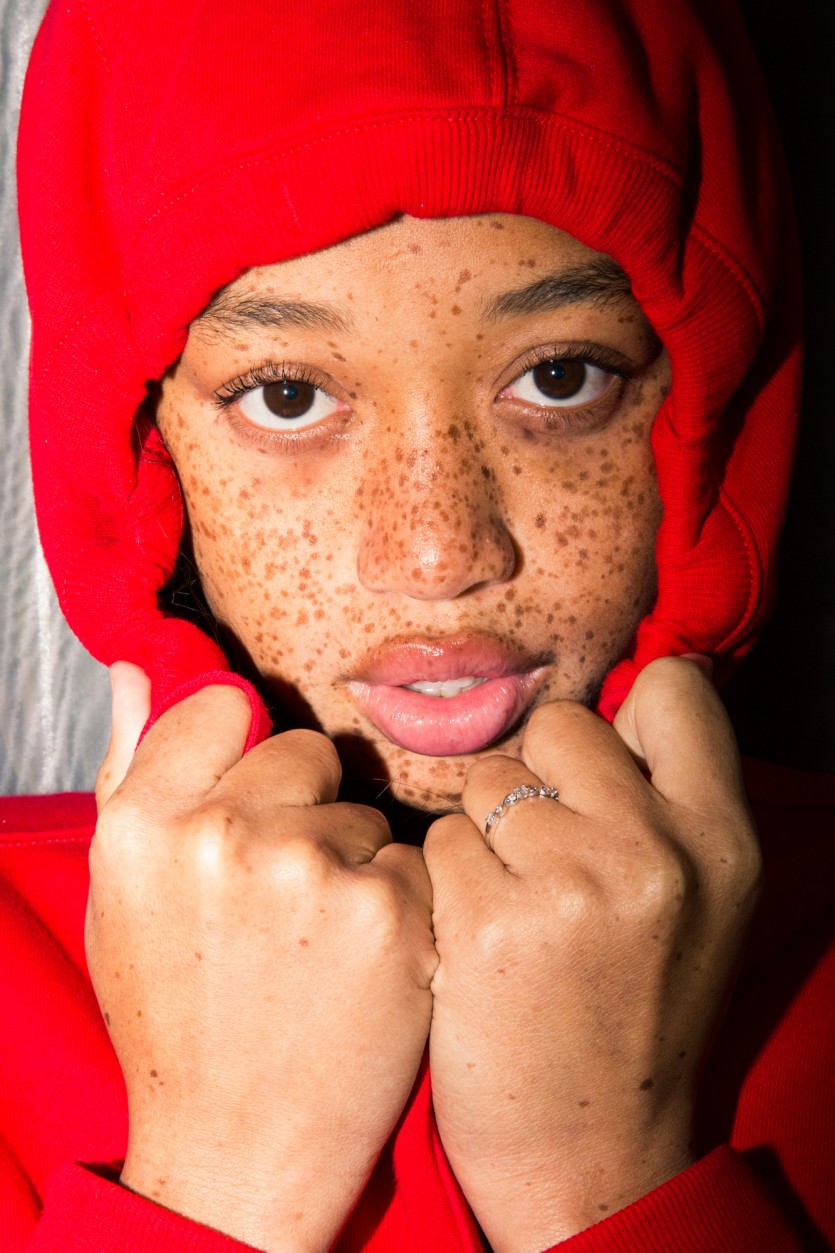 Why social media can be toxic, too:

“I was asking my followers on Instagram, ‘What do you feel is the hardest about securing self-confidence?’ Everybody was like, ‘It’s hard to not compare myself to others.’ With social media, it’s exciting, because you can see everybody, and people are sharing a lot of positive things; but there are also a lot of negative things. You don’t realize that while you’re sharing yourself and are happy about yourself, somebody is comparing themselves to you.”

The beauty advice she’d give her younger self:

“Embrace your individuality, and be yourself at all times. Don’t try to conform to society’s beauty standards. I think of myself going on agency websites and saying, ‘I wish I was taller or smaller.’ I just wish that when I was younger, I was like, ‘You’re fine just the way you are. You’re growing and you’re beautiful.’”

Shot on site at The Hollywood Roosevelt Hotel.