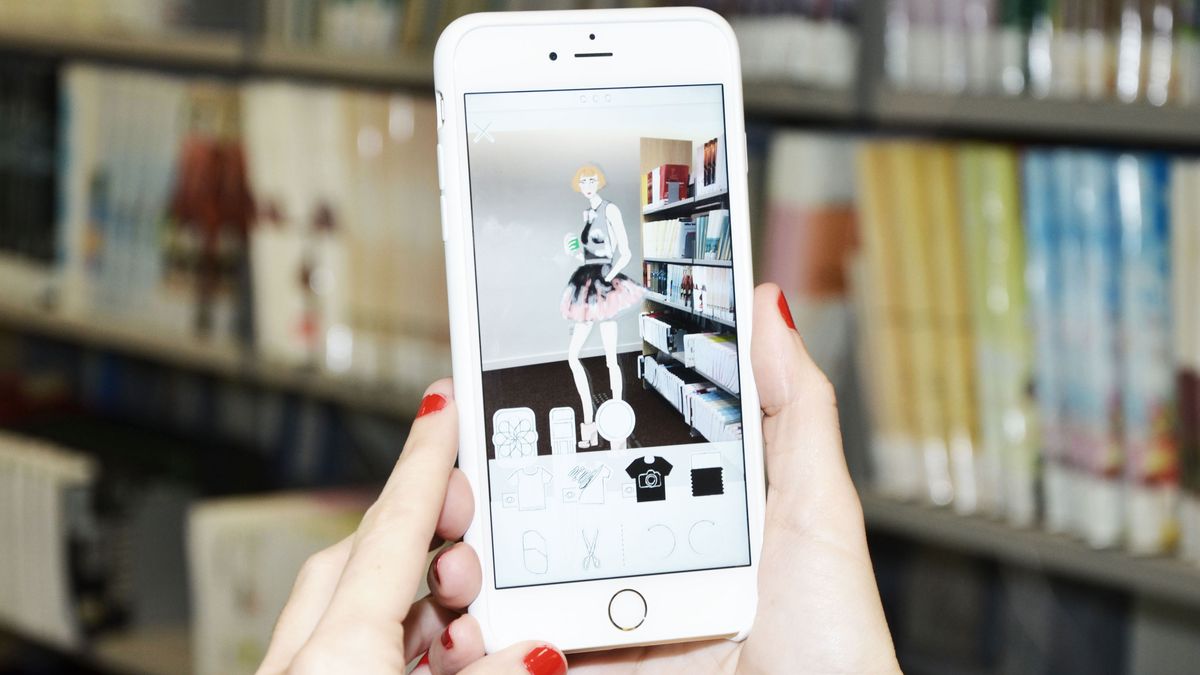 Prêt-à-Template is so genius, we wish we thought about it ourselves.

Have you ever had one of those cartoon-pinging-lightbulb ideas to create a genius app only to be quickly brought back down to reality when you have zero resources to pull it off? Fashion Design graduate Roberta Weiand had one of those too. Except she eventually went all the way to create her illustration app, Prêt-à-Template—a fashion sketchbook that lets you sketch in real time or use templates—which you can find it in the App Store in 145 countries.

Having grown up with a very strong passion for drawing and coloring, Weiand ultimately pursued illustration in school and fell in love with it. Soon after, when she began teaching, she realized her students could learn illustration in a more efficient and useful way if they could create them on their Apple devices. This is how Prêt-à-Template was born, and the feedback since has been incredible. “Fashion designers say that it makes their lives easier, fashion students and aspiring designers [say] they are learning about body proportions. Designers from other fields [are] able to migrate to garment product development, and fashion teachers say they’re using the app as a teaching tool—which fills me with pride,” Weiand tells us. We caught up with Weiand to learn more about Prêt-à-Template and what it was like to launch her own app.

How she first fell in love with illustrating:

“I’m not sure about the exact time my relationship with illustration began. I can say that it was something natural that happened throughout my entire life, from childhood to the moment of choosing my professional career. My love for drawing led me to Fashion Design School at the University of Caxias do Sul [in] Brazil, where I learned the process of fashion design [and] illustration.”

Her lack of experience with whiteboards sparked the idea for her app:

“After five years of living abroad and working as a designer, I returned to Brazil in 2011, and one of the first opportunities upon my return was to teach fashion design at the university in my hometown. It was my first experience as a teacher—I had never used the whiteboard for the development of fashion drawings before, and I must say it was a disaster. Drawing in large proportions was not my thing! I spent the whole semester looking for a solution. I felt the need to project the step-by-step of the development from my table in a A4 scale, which was when I turned to my iPad, [as] I remembered that it could be connected to the projector with a VGA cable. I downloaded some drawing apps and added body template images to use as guideline.

“From there, it didn’t take too much time for an idea to start blooming in my mind. The Prêt-à-Template app was born from the need to broadcast the step-by-step of the fashion hand-drawing process to a classroom full of 60 fashion students. I presented the project to a group of programmers who immediately believed in the idea. After all, this would not only be a teaching tool, but also a promising future for fashion sketchbooks.”

The best features in the app:

“As the name of the app suggests, we have a big focus on [fashion templates]. Our biggest motivation is to create guidelines that help make the fashion drawing process easier for our user. Our templates are presented in three views (side, front and back) and can be turned on and off at any time, so when the work is done and the templates are off, the final result is the sketch made by the user.”

Why it’s the ultimate app for fashion designers:

“Fashion ideas can come up at any time, anywhere—that’s why designers cannot live without their sketchbooks. Now imagine if your sketchbook provides unlimited pages with no paper waste, a range of fashion templates, patterns and coloring supplies, and the possibility to organize coolhunting, prototype and fitting model notes, while also enabling co-creation with your contacts, video recording mode, and integration with all your Apple devices. Not to mention the advantages of digital drawing, such as zooming in for detailed sketching, making copies of the original drawing, and exporting psd layers. It’s the dream sketchbook!”

The advice she would give to those looking to launch their own app:

“Before starting to develop an app, be sure that your idea will bring something meaningful to the user. Think of all the benefits that are missing in that app market or segmentation, and what your project will offer in order to change the user’s life. Then design, re-design, and re-design again, thinking minutely about the fluidity of actions—only start the programming process after that. Always be open to what your user has to say, and keep in mind that an app project will never be over, that’s why it is also important to join a team capable of working with the constant need for evolution.”

On what is next for the app:

“We are focusing on those who are not very familiar with fashion drawing and turn to the Prêt-à-Template to learn about it. We are working on different types of templates with a focus on outfit combination, creating more complete guidelines. We’re planning a gallery space inside the app where users will be able to share their illustrations with the Prêt-à-Template community, and we’re also working on future collaborations with other designers.”