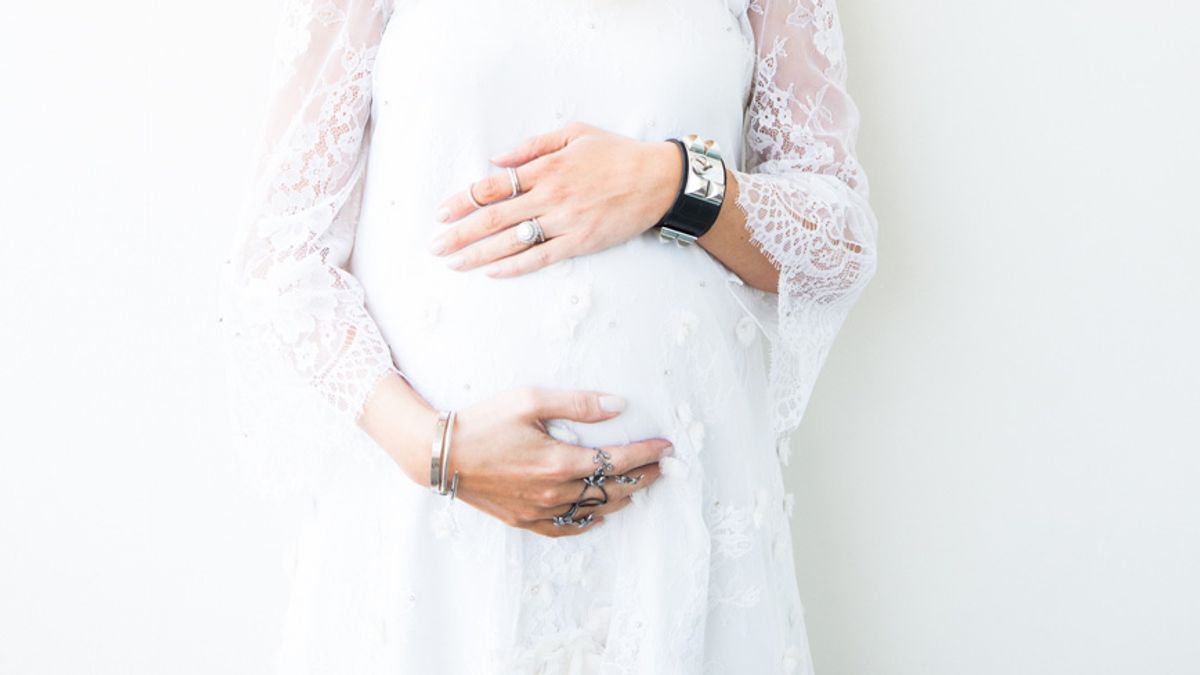 File this under: things to never say to a pregnant woman.

I was about four months pregnant when my husband and I decided to go public with our news on Facebook. A lot of people choose to do it at the 12-week mark, when risk of miscarriage significantly drops, but we chose to hold off a few more weeks, still feeling uncomfortable at the thought of sharing such personal, private information so widely. We had been traveling in Asia for a couple of weeks, making our way to a friend’s wedding in Thailand, and I was about to see a bunch of people I knew from college. I figured announcing it several days before the event was just an easy way to let everyone know in one fell swoop. I was also starting to show, and I didn’t want the pouch that was forming under my belly button to be confused with one too many pad thais.

At the cocktail party the night before the wedding, I was chatting with a group of people when a girl I know from college congratulated me, referencing the Facebook post, and asked, “So, how many months?” As I began to reply “A little more than four,” she gently pulled back the large pink pashmina I had strategically draped around my shoulders to cloak my growing behind and thighs, glanced down at my belly, and exclaimed, “Whoa, that’s gonna be a big baby!”

What? I didn’t know how to process that reaction, and my mind went blank. I was at a total loss for words, which, if you know me, is rare. How do I respond to that? Is there a response? I remember looking helplessly to another friend standing there for some kind of support, but all I could muster up was an awkward laugh, a shoulder shrug, and something along the lines of “Oh, well, I don’t know, everyone’s different, I guess.”

This minute-long exchange might seem completely harmless to you, and there’s no doubt this girl did not intend to offend or humiliate me. Had I not already felt insecure in the dress I was wearing—it fit me perfectly when I packed it two weeks ago but was now tight in all the wrong places—perhaps I would have just laughed it off. But the comment did offend, and it did humiliate. So you might be asking, “That’s it? That’s your whole body-shaming story?” To which I can now confidently reply, “Hell yes, it is,” and here’s why.

Her comments left me feeling both incredibly self-conscious about the way I looked as a pregnant woman and worried about the health of my baby. Had I already gained too much weight? Do first-time mothers like me usually show as I was beginning to at just four months? Does this mean my baby could be overweight at birth? Is that even a thing?

I started thinking about more appropriate responses. Should I have explained that in the early stages of pregnancy it’s typical to get progressively more bloated throughout the day, which was making me look much more pregnant in the evenings than when I woke up in the mornings? Should I have told her that my doctor said I was gaining weight at a completely average rate for my original body weight and height? I realized every reply I wished I had ready on the tip of my tongue was nothing but an excuse, an explanation for my appearance. My entire perspective was already so twisted.

I returned to my hotel room that night in tears, feeling depressed about the changes my body was experiencing and the lack of control I had over them. My husband—who had missed most of the cocktail party due to an unfortunate run-in with a traditional Thai soup—tried to console me. He told me I looked beautiful and that I should have just responded by saying, “No, it’s going to be a healthy baby,” but my mind was so far down the rabbit hole of insecurities that nothing he said could comfort me at that point.

Although I was past the daily nausea and complete and utter exhaustion that consumed my first trimester, I was by no means experiencing that pregnancy “glow” people talk about. My skin was so dry I was using a kind of Vaseline on my face just to try to stop it from cracking, my hair was falling out more than ever, and my nails were breaking down to the finger. To top it all off, I was starting to see stretch marks in new places despite lathering my body daily in a concoction of shea butter, cocoa butter, and almond oil.

For the next week I continued to think about what happened, trying to pin down exactly what about it still made me feel so terrible and why I couldn’t shake it off. First, there was the obvious implication that I was showing more than she deemed normal at four months, which, to her, was a clear indication that my baby was headed for an above-average weight. Then there was the presumption on her part that it was in any way appropriate to make an unsolicited comment about my physical appearance. I didn’t ask her what she thought about how I looked, so why did she feel it was OK to say something?

I suddenly wanted to point a finger at all the celebrities who make this experience look effortless and, in turn, make those who haven’t experienced pregnancy think women have absolute control over the way their body grows. Society celebrates those who lose the baby weight in a matter of weeks, so naturally people assume it’s a positive thing when the only part of a pregnant woman that appears to be growing is her belly. But it’s completely unrealistic, as others like Kim Kardashian and Chrissy Teigen have helped people see. Few women have control over how their bodies will change during pregnancy, no matter how hard she works out or how healthy she eats.

I’m certain this girl didn’t intend to hurt me or make me feel worse about my self-image as a pregnant woman, but she did open my eyes to a world where pregnant women, like those who aren’t pregnant, are faced with the same societal pressures of an unrealistic body type. In the case of pregnant women, it’s the kind of body that only gains weight in the belly area and garners attention from others with remarks like “You’re so tiny!” or “You can hardly tell; look how skinny you are!”

I hear people using these phrases all the time—I’ve been guilty of it myself. But this is just another form of body shaming, and we must recognize that it can be as damaging as telling someone they’re going to have a “big” baby. These well-intentioned comments could be directed toward someone who’s privately suffering because her baby isn’t growing fast enough. On the other hand, what may seem like a compliment could inadvertently be encouraging someone to skip out on yet another meal. The point is, you probably don’t know enough about what a woman is really experiencing behind closed doors to comment, so don’t assume to know by telling her something you think she wants to hear because it sounds good.

What I learned over time, and what I know for certain now, about 6 months into my pregnancy, is that body shaming can work both ways, regardless of being pregnant. But when it comes to referring to pregnant women, it’s extremely important we change our vocabulary, otherwise we are guilty of perpetuating this unrealistic notion of what a woman carrying a growing child is supposed to look like. Rather than telling a woman you can hardly notice a difference, simply tell her she looks amazing and that her bump—however big or small it may seem to you—is adorable. It will, without a doubt, make her day.