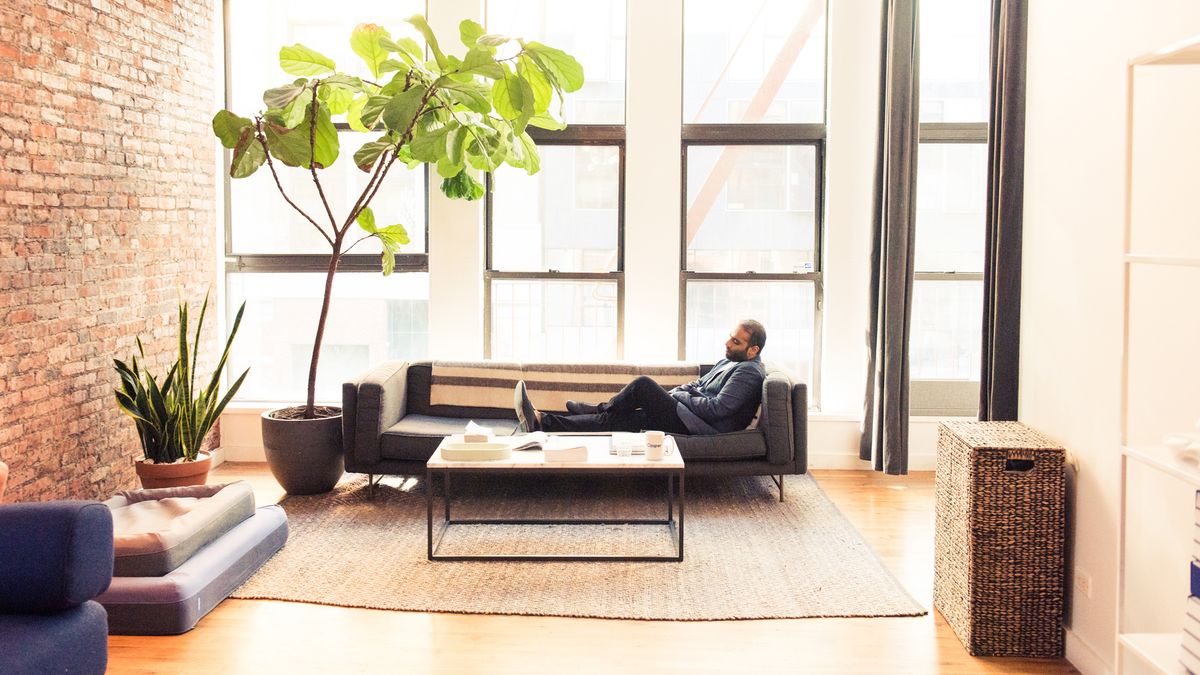 COO and co-founder Neil Parikh is the mogul of sleep.

The first thing I did when I moved into my new apartment in New York (before I even had Wi-Fi) was go on Casper.com and order a mattress. Yup, it’s 2016 and I bought my bed off an iPhone (I then also proceeded to order fifty dollars’ worth of Chinese food from a noodle shop on Seamless). I wanted that moment when there’s nothing in your apartment but a mattress on the floor, some noodles in your hand, and a good bottle of wine—before the impending anxiety of having to unpack because you don’t know where your jeans or forks are settles in. And Casper allowed me to do that—because their courier service delivered the mattress to my doorstep the same day in a box (!). I never had to leave home, go to the Sleepy’s on 6th Ave. like my mom wanted, or spend nightmarish hours haggling for a bed. And I got to sleep on the comfiest mattress of my life instead of on the floor like most people do after moving.

The aforementioned award-winning (yup, it wins more stuff than I do) mattress is made up of two high-tech (and it’s more high-tech than I am) foams. Considering you spend half your life in bed and the other half in shoes (another reason to buy the Guccis), it’s worth investing. Many months after that night, I got to spend the afternoon lounging around Casper’s showroom in Soho (for the old-school types, there is a brick-and-mortar!) listening to one of the founders and chief operating officer, Neil Parikh, tell the Casper tale: how he left med school to launch a mattress company, how he and the entire Casper team are focused on actually solving problems instead of just marketing products, how the key to a really good night’s sleep is not just eight hours, and how he refuses to binge-watch Netflix from his bed.

How Casper came to be:

“It all started when I was in medical school—my friends from Brown wanted to move to New York City, have a free summer, and try to start a company together. We started an e-commerce company that was working with bloggers and people who make really interesting curated objects, allowing them to sell their pieces. I didn’t know a lot about e-commerce, but it was a cool idea! Long story short, it was just too complicated, but I ended up at a co-working space with one of my co-founders today, and he was telling us how the mattress industry is a total racket.

“It’s the same products in every local store, but they change the labels and commission salespeople, and it’s a gross experience. We thought, there has to be a way to do a better job at this. It was kinda serendipitous. My dad is a sleep doctor, so I called up a friend from med school whose fiancée was a product designer at IDEO. We told him our idea for a mattress company, and he had actually designed a bunch before.”

Why they developed a mattress that solves sleep problems:

“We spent six months prototyping hundreds of different kinds of mattresses, trying to solve the key problems around sleep. A lot of time people focus on mattresses as furniture, buying them in the same places they buy lamps. The reality is, a mattress is the cornerstone of what’s important for sleep.

“You spend a third of your life sleeping—it is so important! Sleep, sex, everything—you do everything on your mattress. We looked at the popular memory foam beds, which are good for your back but have two key problems—they sleep really hot, and you feel like you’re stuck in it because it isn’t bouncy. We invented a new mattress that has memory foam and latex, sleeps a lot cooler, and is bouncy. We put it into a box and ship it to you within an hour in New York City. We’re trying to reinvent the whole mattress-shopping experience to make it super simple and fun.”

Why traditional mattress shopping is a nightmare:

“The idea that you’re going to buy a mattress after laying on it for ten minutes in some gross environment doesn’t make sense! We want people to think about sleep in the long term. When we designed our sheets and pillows, it was after watching how people sleep and designing products that are optimized for sleep instead of marketing gimmicks. You don’t need 25 options! Like a ‘gel cool max 7000 with 42 hundred springs’—no one knows what that means! You leave stressed out because you don’t know if you picked the right mattress or got a good deal on it. We didn’t think we would make just one option, but after researching and watching people sleep, we were like, ‘Holy crap!’ Almost everyone likes the exact same type of bed.’ Twenty years ago it might not have been possible, but today we use space-age foams that are super responsive and temperature-regulating. With this technology you can build something that almost everyone will like.”

How the brand is focused on fixing problems instead of just selling products:

“The ability to create a really cool brand that is rooted in science and engineering is exciting. There are a lot of companies with a cool logo and interesting brand but don’t have a lot of depth, engineering, and science behind them. When we met Jeff [Chapin], we realized we could make a better product and team. We wanted to create a connection with a person, get them to care about sleep, and develop the best products in the world. That got us super jazzed! When we launched, we had no idea what was going to happen. On launch day we invited people to have breakfast here in the [New York City] loft. We thought no one was going to show up—we ended up selling out the first day. We walked all the beds from the loft down to Bond Street, packed them in the UPS truck ourselves in the middle of the street while it was raining, and shipped them out to people—it was so fun. We then sold a million dollars in our first 28 days. We were back-ordered for months and months. We are lucky that people really like our product and tell their friends.”

“It’s taken a long time to expand the line. While watching people sleep, we noticed a few things. Do you ever notice in the middle of the night your feet will sometimes peek out at the bottom of your sheets? We put temperature-humidity sensors on people’s feet, and it turns out over the course of the night when you have high-thread-count sheets, a pocket of heat and humidity builds up, and that is your body subconsciously trying to get rid of it. When we designed our sheets, we had to make them extra breathable to help your body auto-regulate temperature.”

Why you should probably go buy new pillows:

“People are used to buying the eight-dollar Ikea pillows that have cheap fiber in them. Your pillow, besides your mattress and sheets, is the most important thing for your anatomy. It determines spinal alignment and helps you sleep. We developed a special synthetic fiber that acts like a spring on the inside, feels like down, and supports your neck.

“Most pillows aren’t washable, and it’s gross, because you’re collecting sweat, dust, all kinds of things. Think about this: We wash our sheets, but we don’t wash our pillows? It doesn’t make any sense! We designed our pillow from scratch so it’s washable. We look at the core human behaviors that we need to solve and then work backwards and build something that people want.”

“The timing was amazing for us. That original inspiration was from society tracking their sleep with Fitbits, drinking green juice, eating healthy food, people were caring about health more than ever, but sleep was being neglected. You’d have to get a crappy mattress, crappy sheets—there was no brand that said, ‘Hey, we have good products, and we are going to be really honest about it and deliver an awesome experience.’ More than anything else, at Casper we want to get you excited about it! Normally when you buy a mattress, you are dreading going into the store, as opposed to the fun feeling at the Apple store. Everyone is writing about sleep and how it affects your life, the way you look, and your performance. We aren’t creating this trend; I think it’s already happening, but I hope that we’ve created something so when people think about how important sleep is, there are things they can actually do to improve it.”

The keys to a good night’s sleep:

“There are two ways to look at this: be very prescriptive and tell people, ‘Sleep 8 hours, don’t drink alcohol, don’t drink caffeine after 5 PM. Don’t live your life.’ The reality is none of us can do that. I don’t follow those rules. If you want to optimize your sleep (if you are a real person), if it’s more realistic that you’re going to sleep four hours, get the best four hours you can. Set up your environment so you can get that: get blackout shades so you aren’t woken up by the light; if you’re going to drink, make sure you’re hydrated (caffeine is particularly bad for you, try not to drink it late at night); get the right sheets, pillow, and mattress; set the temperature at 65 degrees. If you do all that, you are going to get 70% of the way there without having to completely disrupt the rest of your life.”

What a sleep expert keeps on his nightstand:

“There is actually nothing on my nightstand! Just my phone charger. One thing I’m religious about is not having a TV in my bedroom. If I’m going to watch a show, it’s in the living room or another place. There is strong psychology around keeping the bed as the place where you sleep and do nighttime activities. Once you train your mind that your bed is a place where you do everything, it becomes really hard to fall asleep. I do wake up every day without an alarm, but I have this fear of waking up late, which is the only reason I set one.”

What inspired them to develop a mini Casper dog bed (!):

“We spent a year working on dog beds, built over a hundred prototypes, and created one from scratch. It was inspired by people sending us tens of thousands of photos of their dogs on Casper and begging us to make a dog bed. Originally we wanted to shrink a Casper into a dog-sized version. But we watched dogs sleep, spoke with dog psychologists, and realized it’s a science. Dogs auto-regulate their temperature, so they don’t need cooling latex. Back support is very important, especially for different-sized dogs. We created a memory foam that has a waterproof layer, so it’s easy to clean. Most of the time, dogs are looking for a place to hide—so there’s corners for them to hide, dig, and tuck their heads into. A lot of dogs have loved them.”