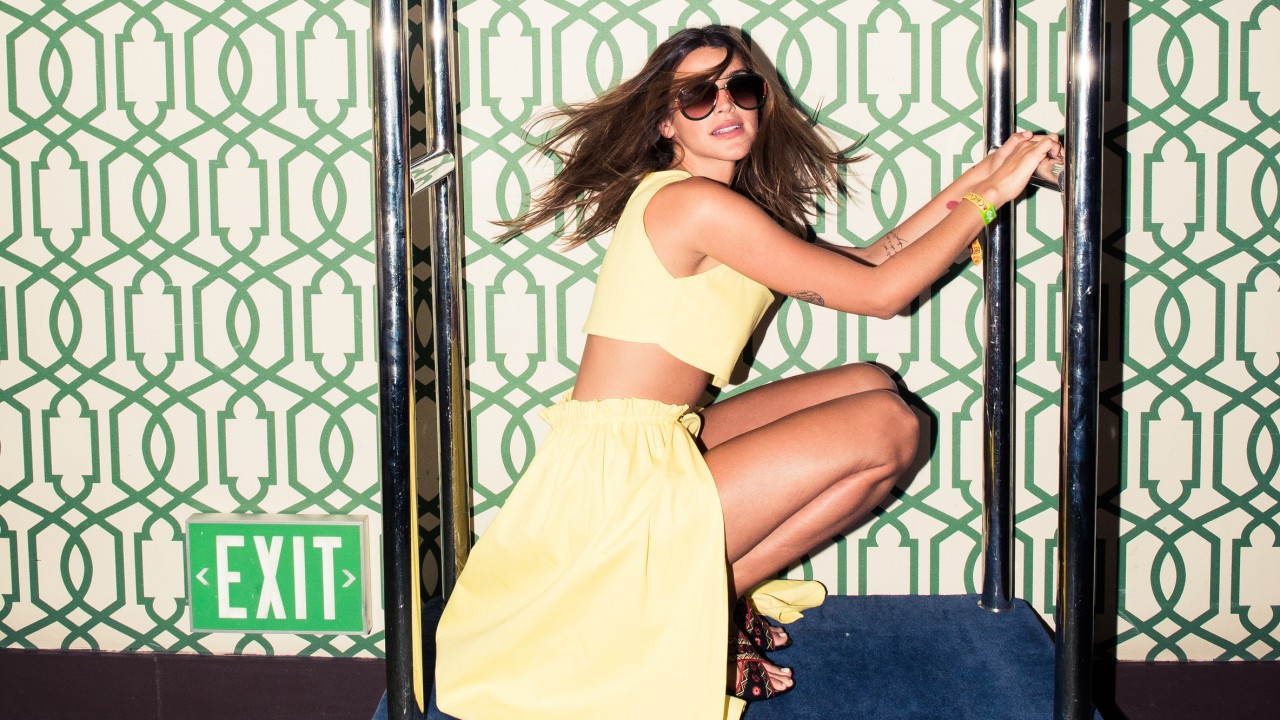 We caught up with the Argentine actress as she got ready for Coachella.

When you’re in the midst of the crowds at Coachella, surrounded by people in elaborate outfits and shiny makeup, everyone looks vaguely familiar, like they might be a model with a massive Instagram following or an actress you *know* you’ve seen somewhere. Calu Rivero happens to be both.

Calu is huge in Argentina, and you likely spotted her last year, appearing in Stella McCartney’s series One City One Girl. So when we had the opportunity to chill with her as she got ready for Coachella? We took it—and made sure to get all the inside scoop, before she moves to the U.S. later this year.

What her typical skincare routine is like:
“I have a very simple routine. I use Avene Gel to clean my face, Yon-Ka cream to hydrate my skin, and I always use SPF 50. I also never go to bed with makeup on, either!”

Why she doesn’t wear a lot of makeup:
“An important part of my style has to do with showing me like I am: real, natural, and a fresh-faced woman.”

What her diet is like:
“I am vegan, but becoming that has been a long process! I rely heavily on vegetables and fruits, and I love rice and lentils because they give me the energy I need. Oh, and French fries are always a favorite!”

The products she uses in her hair:
“I was chosen by Kerastase Argentina to be ambassador of Aura Botanica. It's the first line of hair care with ingredients up to 96% natural and organic, obtained from responsible sources. It is sustainable and friendly to the environment, and also keeps my hair nourished, without frizz, and with brightness.”

How she got to this point in her career:
“I moved to Buenos Aires to study acting under Norman Briski, who’s a well-known Argentine theater actor and playwright. After a year of auditioning, I got chosen to star in a soap opera called Patito Feo, Ugly Duckling. It was such a big deal for me as my first breakthrough job as an actress. I just kept going from there and started acting in movies and modeling. I think, as a small-town girl, I’ve always had this drive from within. I wanted to prove to myself that as long as I try, even if I failed, it's OK.”

What she’s working on now:
“My work with music, the relationship with my community through social media, my work with fashion, my love and activism to preserve our planet earth and, fundamentally, my effort to project my art through acting are my focuses now. That’s what I want for my life. These days, I’m shooting a series called Sandro de America and am about to start shooting a movie in Argentina called El Sonido de los Tulipanes.”

How she’s able to balance three different careers at once:
“Finding the balance between acting, playing music, and modeling was, and is, a constant learning experience. I’ve been working hard this past year, identifying and setting goals, and it’s not easy. You have to accept that you can’t do everything and give priority to what really makes you happy, and combine it in a way that is also what gives you the income to live.”

Her favorite place to travel:
“There are many places [that I’ve traveled] that have impacted me, but of course Tokyo is my favorite place in the world—especially because I’m a huge fan of Yayoi Kusama! I have the Japanese flag tattoo on my left wrist.”

Her style in three words:
“Natural, authentic, and sensual.”

Whether she’s an over-packer or an underpacker:
“I just carry what I need. I’ve learned to carry less and only pack the essentials.”

How she puts together her outfits:
“In general I tend to plan what I wear in advance—what you wear communicates a lot!”

The accessory she wears way too often:
“Hats! I love, love, love them. Especially the oversized ones with a solid shape.”

Her current career goals:
“My immediate goals have to do with developing and adding depth to my expression as an artist and actress, but I also just got signed to the creatives division of The Society Management. I’m moving to the U.S. this year, so I’m very excited about what the future will bring!”