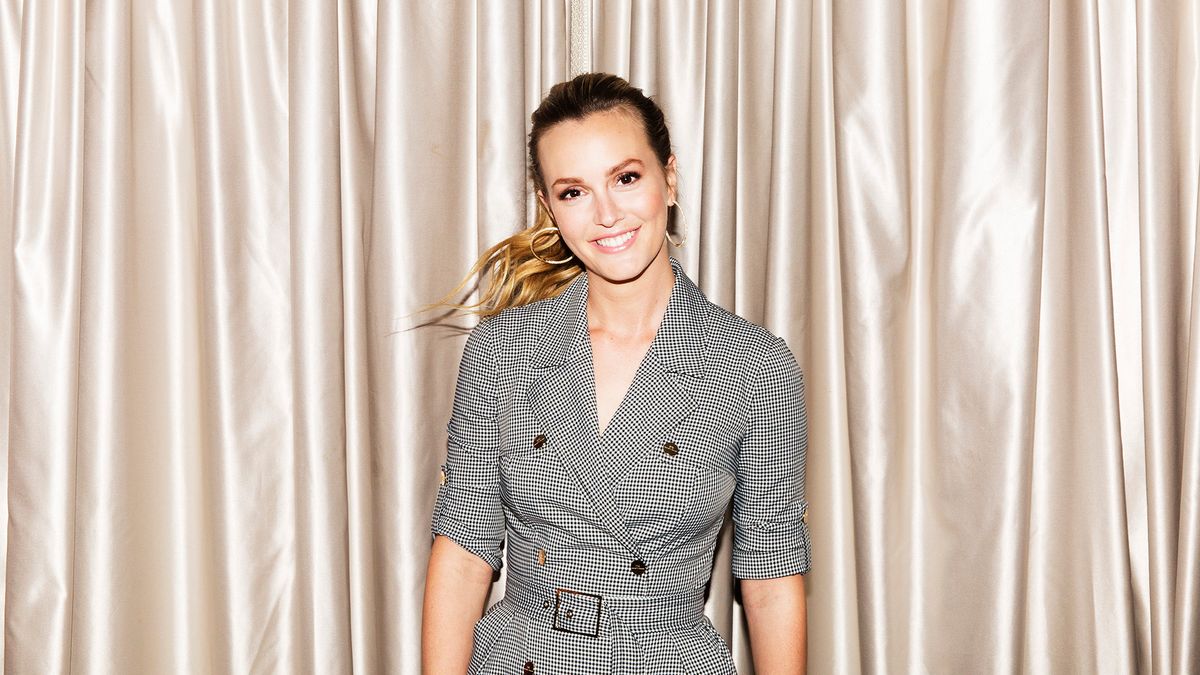 Leighton Meester Dreams About Giving Her Past Self a Pep Talk

Her new show is all about time travel, so it makes total sense.

You’ve probably already realized this, but Leighton Meester has great comedic timing. The way she delivered her smart, snarky lines as Gossip Girl’s Blair Waldorf is part of the reason the show’s still a hit. So we were excited when the star finally returned to TV, bringing tons of laughs as a time traveler’s girlfriend in FOX’s Making History.

While Deb couldn’t be more different than an Upper East Sider—she’s Paul Revere’s daughter, FYI, and rocks long corset dresses instead of designer duds—she still qualifies as a power woman with a bit of naivety mixed in. Leighton chatted with us about her new role at the Peninsula Hotel in Beverly Hills, revealing that she would totally time travel if she had the chance, probably to chat with her past self.

What she enjoys most about making the show:

“Of course it’s fun and funny, but there are a lot of other elements that I really enjoy. There’s a sweet romance, there’s adventure, there’s friendship, there’s a sci-fi aspect that we don’t take too seriously. Obviously—we’re time traveling in a duffle bag. And of course, historically, we’re not holding the specifics too dear, just for the sake of actually making the show move and to have fun with it. For me, it’s one of those shows that I want to watch at the end of a long day, [when] I just want to sit, have a laugh, and enjoy it with my family.”

Whether she enjoys doing comedy over other genres:

“Going to work and feeling lighthearted, it was kind of nice. The last thing that I had worked on long-term was Of Mice and Men, and that was definitely not the most light-hearted character or play. To be able to go to set and just know that I’m having fun in a family-like atmosphere, where everybody is really friendly and warm and supportive, it was awesome. Of course, everybody was just that when I was doing Of Mice and Men—it was just the character was certainly the butt of a lot of abuse. It’s just a different feeling. I couldn’t say that I prefer any genre the most, but I will say that as far as long-term work on a TV show goes, I’ve been really enjoying the lightheartedness of comedy.”

Where she would go if she could time-travel:

“I’ve always enjoyed time travel movies and the idea of being able to go back to different times in history. Just to see what it was like, you know? How people spoke, and the day-to-day, the way the world looked. The other side of it is the idea of going back to a time in your life, which we also do on the show—Dan goes back in time to his childhood and gets to explore some of the things that has happened to him. So, that’s kind of fascinating, thinking about ‘Oh, if I could travel back and change something, or have a pep talk with myself.’ I think that’s something that maybe, occasionally, everybody wishes. And I’m no different.”

On the parallels between her character fighting for women’s equality and what’s going on today:

“I think that’s been an issue forever, for as long as there have been women. I think it’s really special that, in this show, where we’re not taking anything too seriously and our first goal is to make you laugh, we can also sometimes make you think. Deb is ahead of her time, and she’s questioning women’s place in society and how they’re treated. She time-travels to modern day, and it’s a funny fish-out-of-water scenario, yet she also brings up—just because of her innocence and naivety about modern—‘Well, aren’t women equal now? I can’t believe woman don’t have equal pay.’ Up until recently, women were expected to stay at home and get married at a young age and just do the cooking and cleaning and child-raising. I think it’s a fascinating point of view, because she has ideals that are still so relevant.”

Whether she’s been working on any new music:

“Right now I’m writing and planning on hopefully being able to put out some music within the next year.”

On rarely talking about her family with the media:

“I find it to be an important element when I’m talking to girlfriends and catching up with what’s going on in each others’ lives. Our relationships are a huge part of our lives. But I think women need to be held up and supported and lauded for their achievements outside of their marital status. It definitely makes you feel more accomplished when you’re being supported for your intelligence, your character, your achievements. Trust me, in my personal life with my friends, it’s a huge topic of conversation, because it’s your daily life and a lot of the time in your daily life. But when it comes to work, it’s not what makes you, you.”