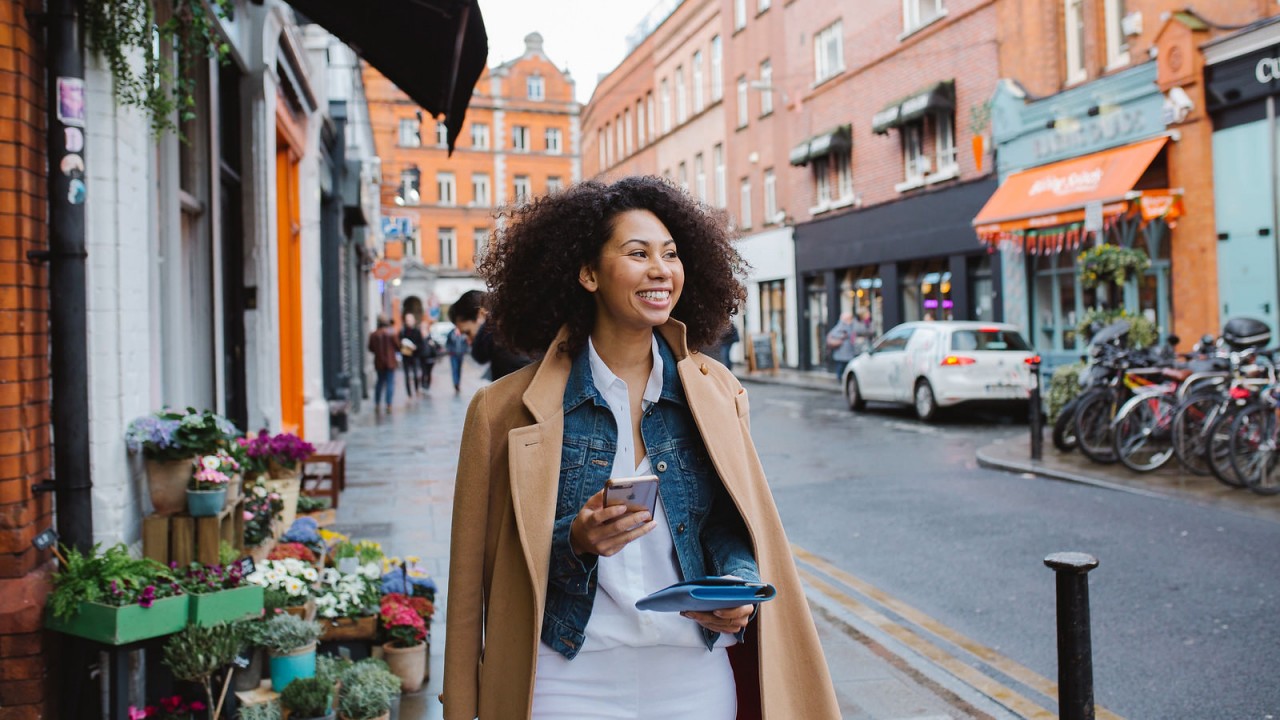 How to Do Dublin in 24-Hours

A postcard from a spontaneous trip to Ireland.

If there’s anything we can understand, it’s spontaneous travel. We’ve been known to pull together a tourist visa and jet to Beijing in the space of a few days, and we can respect anyone with the spirit to just throw some necessities in a carry-on and go when the mood strikes. Which is exactly what we found in Bianca Maxwell, a digital and web manager, producer, and talent rep, who spur of the moment decided to turn a weekend in London into a two-week long trip around Europe. Her first stop? Dublin. Here, Maxwell’s postcard to those of us still sitting at our desks.

“I originally didn’t plan to visit Dublin; it wasn’t even a major to-do for me. I was just looking to visit London for the weekend after finding dirt cheap airfare. If you know me, however, things can never be so simple, and my weekend trip quickly turned into a solo, seven-country, 14-day world tour. My wanderlust is as strong as my curl pattern, evidently.

“Dublin was the second stop, per recommendation from my younger sister who recently visited on her own (yes, we, as a family, love to travel alone). She had a great time, so I said why not! Let’s sneak this city onto the itinerary with only 24-hours to spare.

“Armed with a hit list of locations and food to try, it was a 24 hours well spent. I not only made a handful of new friends, and learned some German (of all things), but every Irishman and woman I spoke with were kind, helpful, and full of facts about the city.

“From London it was a short flight under $30 (!), and the Guinness is truly better when sipped in its homeland.”

“Red, white and blue with a side of Fuzz! I’m giving you all-American vibes while in Dublin for 24 hours.”

“After landing in Dublin, the customs agent and I got into a bit of chat about my overnight stay. He suggested I take the bus into the city, instead of an Uber. It was 10 euros round trip, and gave me a quick tour of the city. It was also the only time I was there when the sun was out and it wasn’t rain.”

“I snapped this from the top of the bus. I follow an account on Instagram featuring the doors of Dublin, so I had a solo moment of sheer excitement that I was here. I met two fellow Americans on the bus, staying at the same hostel so we walked over together.”

“I opted for a hostel stay while in Dublin because it was one night, and I was alone. I stayed with the hostel chain named Generator. It was my first time staying at a hostel and it felt like a posh dorm. I opted to stay in a mixed dorm, but boy, would I be in for a surprise.”

“Once I checked in and locked up my suitcase, I went wandering. This was the first mural that caught my eye as I searched for brunch.”

“A traditional Irish breakfast! There were a few things I didn’t recognize, but having beans and mushrooms for breakfast was a first.”

“Ha’Penny Bridge with various love locks. The history behind Ha’Penny Bridge is that the queen at the time required everyone to pay half-a-penny each time they crossed. It was the only bridge connecting the north and south sides of the river.”

“I LOVE a thrift store. Especially one that charges by the kilo. This thrift store receives clothing every other day of from all over Europe. I bought two vintage sequined date night tops that can be dressed up or down. Now all I need is a date.”

“Traveling alone means struggling to get your picture taken. Following the, ‘if there’s no photo, it never happened’ rule I did some research into finding a local that could show me around and help me capture my visit. Flytographer paired me with Vanessa, an emerging Brazilian lifestyle photographer living in Ireland. She walked me around Temple Bar, showed me some of the nooks and crannies that tourists wouldn’t normally find—like this muraled building—and we even ran into her boyfriend (to be honest, when he kissed her I thought he was a stranger and was fully prepared to put my boxing skills in action).”

“A very meta-moment as I capture a #IHaveThisThingWithFloors.”

“This is a gnarly tattoo parlor that we walked past. Later that evening I would walk into my hostel room and be greeted by five German guys, drinking Guinness in their boxers all speaking heavy German. We became fast friends and I had a fabulous night as we talked tattoos and politics, and I tried to convince them to come on a walking tour with me the next morning. Fun fact: I can curse in German now.”

“You can’t tell, but it’s raining and I'm wearing all white. Could have been a disaster.”

“Florals outside for St. George’s Arcade were a perfect match for my Smythson wallet. This travel wallet got me through nine flights, four train rides and a hike through the Atlas Mountains without losing a thing. I got compliments every time I pulled it out and it is one of my favorite travel accessories to date. I just need to get the matching passport cover now.”

“Inside St. George’s Arcade I found a nut and dried fruit stall. Snacking is essential when you spend majority of your time walking and eating light. I bought four different types of spiced and candied almonds, all eaten before I turned in for the night.”

“Obligatory shoe selfie outside of the tourist trap that is Temple Bar. Every single local told me to stop by, but not to drink there. ‘Get a pint at a local bar, it's half the cost and tastes better.’ After drinking, I picked up a cheeseburger and crashed back at the Hostel.”

“The morning before my flight to Paris, I joined a walking tour north of the river. I met Camille, who is from Germany. We share lattes, German curse words and an umbrella for the first half of the tour. She is having guy problems and I give her terrible advice.”

“The wind didn't give me Beyoncé hair, but this still worked out. We made stops to Trinity College, The Dublin Castle, Chester Beatty Library, The Book of Kels, and the Spire.”

“For a break in the tour I stopped at the nearest pub and ordered Irish stew to warm up. Meat, potatoes, vegetables stew, with bread and butter. None of this has been okay’d by my nutritionist.”

“I did Dublin in 32 hours! I asked a girl walking down the street to take this photo—you have to get over the embarrassment eventually. Waiting for the bus, with my Away carry-on anticipating my next adventure in Paris!”

Photos: Courtesy of Bianca Maxwell and Vanessa for Flytographer