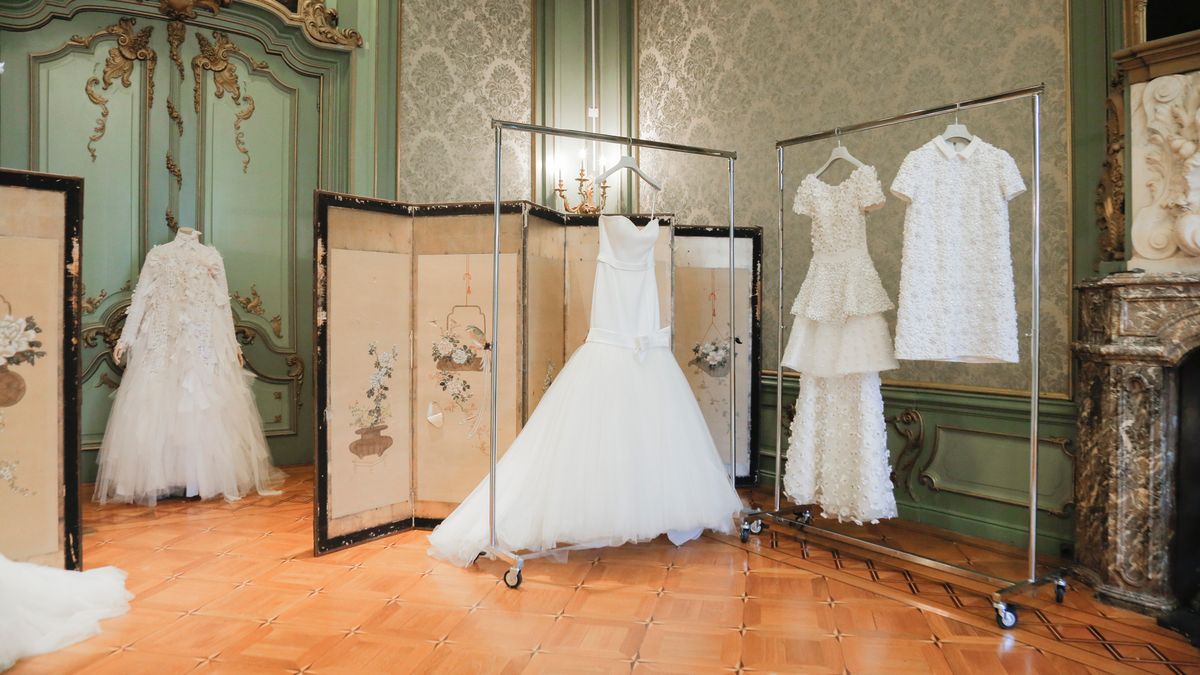 This Is What It’s Like to Wear Bridal Couture

One wedding dress cynic travels to Viktor & Rolf's Amsterdam atelier to try on the Dutch designers’ most opulent offerings.

In case you were wondering, I’ve never dreamt of wearing a fairy-tale wedding dress. No, seriously. I have many fashion-related fantasies, but the big dress just isn’t one of them. As a committed minimalist, I haven’t worn a puffed sleeve, full skirt, or bow since I was under the age of eight. If I have at any point pictured my hypothetical white dress on my hypothetical wedding day, my hypothetical ten-pounds-lighter, pilates-toned, sun-kissed self has appeared gliding into an intimate, urban setting in a nineties silk Calvin Klein-esque slip-dress à la Caroline Bessette Kennedy (RIP). No trails, no floral appliqués, no veil. After all, isn’t there something outdated, if not borderline anti-feminist, about dressing up in your most convincing virgin costume for the occasion when your hand passed from your father to your husband? The veil concept gives me particular cause for consternation. Surely it should merit as much controversy as any other head covering.

Historically, such were my silent, neurotic analyses of the traditional wedding garb of friends and celebrities alike. That is, until one day, a couple of months ago, when my little sister Emma announced her engagement. Since then, my perspective—and apparently hers as well—on the the dress has shifted. Wedding dresses of all shapes and sizes have gained unprecedented territory in the collective Ainley subconscious.

See, shortly after saying yes, Emma appointed me Chief Stylist, a great honor and one which I mean to live up to. In considering the enormity of this duty, I realized I’d be remiss not to explore a variety of options. The bride, my lifelong partner in crime, is now the busy chief of staff of a successful tech startup and knows how to delegate. “What should she wear?” I wondered. We are, after all, different people with (marginally) different figures, faces, and aesthetic frames of reference. Also, Emma is only just 27, blonde, blue-eyed, and will be married before many people in a beautiful, historic building. Maybe, I thought, we should go the whole nine yards after all…

My meditations were interrupted by a tempting invitation: by chance, Viktor & Rolf asked me to Amsterdam to see—and try on—their first ever bridal collection. The designers’ headquarters and atelier are housed in a 17th-century double house once occupied by the city’s mayors, situated on the banks of the grand Herengracht Canal. The interiors, adapted after the style of Louis XIV in 1740 are all intricate coats of arms, decadent reliefs, Empire windows, and marble shires. It’s enough to put anyone in the mood for a bit of pomp and ceremony. And that’s before you’ve even seen the dresses.

There is something about the physical presence of a “dress-up” dress that immediately makes you want to, well, dress up. I guess that’s the point. The collection, which I found laid out resplendently in the drawing room as the portraits of Dutch historical figures looked on, is a bridal exploration of the iconic Viktor & Rolf couture elements for which the designers are known. There are modern fabrics and surrealist touches applied to A-line suits, column dresses, even a tailored jumpsuit. But at the center of the drawing room (and collection), I found a voluminous ball gown dubbed the Flowerbomb. As its name would imply (and based off their best-selling fragrance), this gown is lush, dramatic, and full-skirted, with cascading silk florals, and, the pièce de resistance, a delicate, feminine veil.

Couture itself is sometimes criticized for being irrelevant and out-of-touch. What’s certain is it’s made by dreamers, for dreamers. You have to suspend disbelief, leave emotional baggage at the door, and allow yourself to be transported in the presence of a dress like this… ideally with the help of a glass of pre-noon champagne, as was my experience. Face-to-face with such an oeuvre, it’s hard not to note the rarity of craftsmanship so intricate or details so fine on today’s fashion circuit. It is those handmade intricacies—the very same that induce the astronomical price tags—that make it so mouth-wateringly beautiful.

Viktor & Rolf’s wedding collection, it should be said, airs on the side of relatively affordable (key word being relative) and seeks to modernize traditional bridal couture references—which it does successfully. Even the fullest of dresses feel light, airy, and not the least bit physically encumbering. “So why shouldn’t a happy bride indulge her childhood fantasies?” the dresses innocently ask me.

PHOTO © 2017 TEAM PETER STIGTER FOR EDITORIAL USE ONLY WITH CREDITS

“For us, a wedding dress is crafted for a once-in-a-lifetime experience, a unique piece,” the designers later tell me. “It is an icon of one of life’s most special moments.” It’s true (as sentimental as it might sound) that wearing the Flowerbomb, I suddenly felt my day shifting into the territory of the extraordinary. Whether you enjoy being the center of attention or not, there’s an intense, invigorating feeling—something close to an out-of-body experience—when Viktor & Rolf’s PRs turned ladies in waiting pull the layers of silk over your head.

Perhaps some occasions were made to be lived up to.