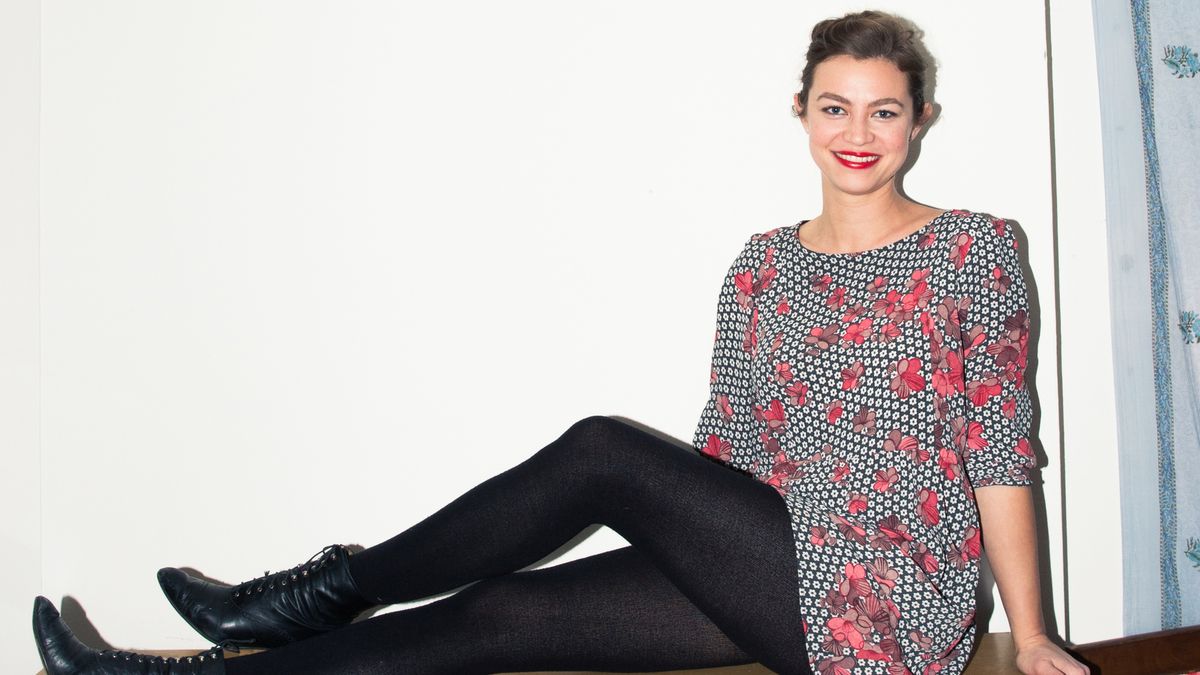 Elvy Yost Thinks Everyone Should Get a Pixie Cut

The Catch actress has the best low-maintenance reason for making the chop.

It’s not every day you find a girl willing to crawl out onto her second-floor fire escape in below-freezing temps for a photograph (in vintage heels!), but that up-for-anything attitude is just one of the many reasons Elvy Yost is so utterly charming. It doesn’t hurt that she has an adorable cat named Rubbish equally game to pose for the camera.

If you haven’t caught her performance on ABC’s The Catch, the latest addition to the Shondaland universe, then get ready to add it to your TGIT binge sesh. Take it from us, when a show’s head writer adds a few jazz numbers to the script just for you, there’s a very real chance you’re a star in the making.

Snacking on chocolates made by Bertold Brecht’s grandson (how cool is that?!) and drinking plenty of tea, we sat down with Yost to chat about everything from organic red lipstick to the best career advice she’s ever received (hint: good posture is key).

“I’m involved in a theater company in upstate New York where I sing and write music and play any instrument that’s lying around. I’ve been lucky that I’ve had a few parts where I’ve gotten to play music. It was really nice of them to write singing into The Catch, though. That was when the new head writer came on. He didn’t know any of my work, so he typed my name into YouTube and saw some old awkward videos of me singing and was like, ‘Oh, I want to put that in there.’ [laughs]”

Why music is essential for getting into character:

“[I get into character] through music, actually. I usually have a theme song or two for a character. I did a movie last summer set mostly in the ’70s, and I listened to a lot of Joan Baez and for some reason “Sparrow” by Simon & Garfunkel became an anthem for [my character]. [For Sophie, my character in The Catch], it became some old standards, like “Blue Moon” and its original lyrics became a thing about her. She’s still sort of mysterious to me, to be honest. There’s a lot going on and yet a very calm, smooth exterior.”

Her trick to remove heavy makeup:

“There’s this thing called hot roll-ups where they soak a little face towel and put some lavender oil on it and roll it up and put it in a toaster oven basically, so every night you can just slap a wonderful, scalding hot thing on and scrape your face off. It’s the best. Aside from that, there is a lot of Dr. Bronner’s in my trailer.”

The organic beauty products she loves:

“[For everyday] it’s just mascara and red lips. Julie Hewett is pretty rad. I’m obsessed with her stuff, and her packaging is so classy and beautiful. I love Gabriel lipsticks too. And Beautycounter. I use Gabriel and Beautycounter on The Catch, and then Julie Hewett in my life. She’s the gold standard. I’ve been doing a lot of Dr. Hauschka day creams and night creams, and I love a good coconut oil, especially for hands.”

On the dangers of last-minute beauty hacks:

“I actually did [a hair treatment] with olive oil once, and it was not good. It’s just sitting there for forever. I actually did it, like, the night before shooting [the upcoming film] The Circle and was just like, ‘oh fuck, what did I do?’ And the hair lady was so mad at me. She, like, lectured me about being a professional. I don’t recommend olive oil in your hair.”

Why every woman should chop off her hair:

“I’m always fluctuating. I let it get to a length, and then something comes up where I hack it all off into pixie land again. I love having pixie hair. I can’t wait to get back to it. You can do it—it’s so freeing! You don’t have to wash it for a thousand hours. [laughs] It’s great.”

“The first piece of advice that anyone gave me when I moved to L.A. was that what you say no to is more important than what you say yes to, which I remember and think about every once in a while. He was like, ‘It’s easy to say yes to everything and anything that comes your way, but it’s very difficult to say no sometimes,’ especially when you’re strapped for money or haven’t worked in a while. I found that to be quite true. And have good posture!”