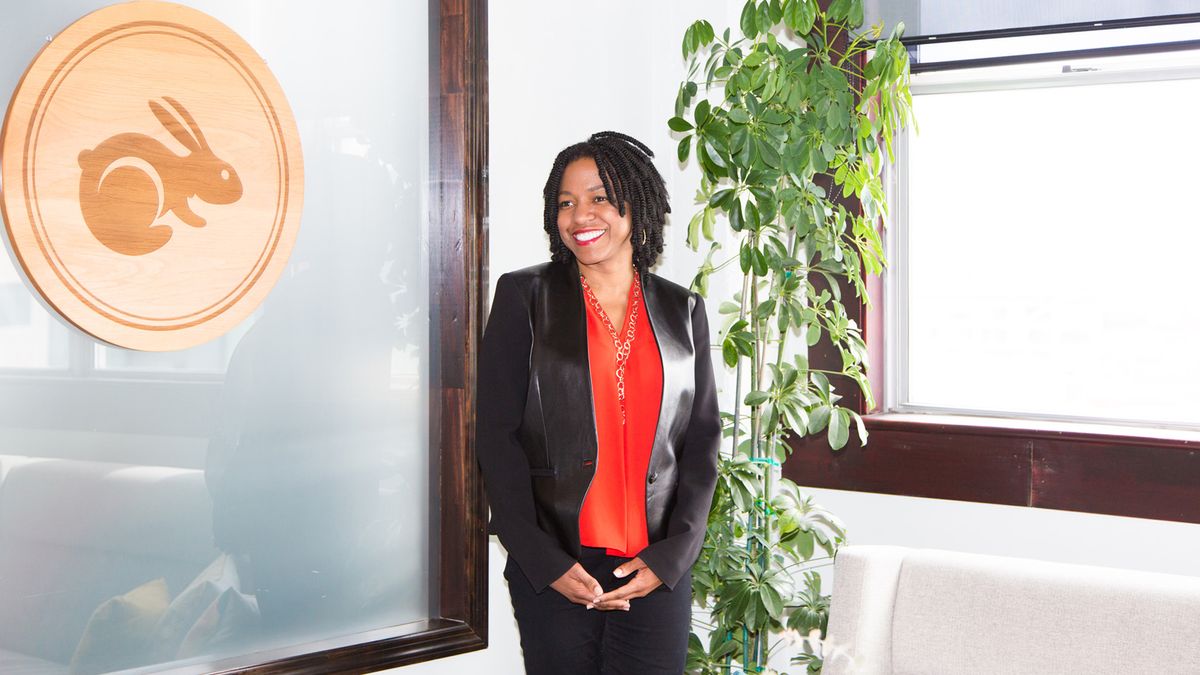 This Tech CEO Is All the Inspiration You Need Today

TaskRabbit’s Stacy Brown-Philpot on why striving for balance doesn’t make sense, and diversity in the tech industry.

Stacy Brown-Philpot is the kind of woman who doesn’t know the meaning of the word “doubt” or understand the concept of self-doubt. Incidentally, she also doesn’t understand the concept of balance—that which every have-it-all woman is meant to strive for according to popular rhetoric (and, well, us)—which she told us with raised eyebrows when we asked what it meant to her. What Brown-Philpot does know, however, is a whole lot—she’s only the CEO of TaskRabbit (maybe you’ve heard of it?) and, before that, sat in multiple major leadership roles at Google (you’ve definitely heard of that), including leading a 1000-person-plus team in India. You would think this would all be a little bit intimidating—and we were intimidated arriving at TaskRabbit’s San Francisco HQ—but Brown-Philpot is warm, quick to laugh, and full of incredible advice. Add her to your list of Superwomen worth looking up to in 2017.

She didn’t always want to work in tech:

“I didn’t always wanna be in tech. When I was growing up in Detroit, most people who were successful were doctors and lawyers, so the definition of success, particularly in the black community, was that you go and become a doctor or a lawyer. But I decided I didn’t like biology in high school, and I didn’t like writing long papers, and so I couldn’t be a doctor or a lawyer, so I had to do something else! [laughs] I did love accounting in high school. My favorite teacher was my accounting teacher and my calculus teacher, and that set me on a path of business and math.”

“I decided to focus on business. That is how I ended up at The University of Pennsylvania. I was applying to college and had gotten a full scholarship to University of Michigan, but I discovered [that] Penn or Wharton was the number one business school. I applied and I got in. I didn’t know what an Ivy League school was. My mother couldn’t afford to send me to school, but if I was going to do business I thought I should go to the number one school that had a business program. When I graduated, I still didn’t know a lot about tech until I went to Goldman Sachs. I got my CPA and worked at Goldman Sachs in mergers and acquisitions. I worked on some tech deals there. That was in 1999, which is when I discovered technology. At the time, I saw these companies that created all this value but didn’t have nearly the revenue or size or scale in terms of people, but they are worth a whole lot of money. I got really curious about tech. That is what lead me to go to business school at Stanford.”

“I got out here to Silicon Valley and was excited to see how merit-based the culture was, how people here were really trying to make a difference and do something that mattered far beyond their own individual or collective capacity, that would matter to the world. That was inspirational.”

How she defines success:

“I grew up in an inner-city neighborhood, and I grew up around people who didn’t have the chances that I had. Or maybe they had them, but didn’t see the opportunity and didn’t take it. I always saw the world as, how do I make it better for the people who are around me? If I could just leave this place wherever I am—Detroit, Philadelphia, New York, California, India, wherever I am—better than when I arrived, I have succeeded. I was a little kid then, and I still feel the same way.”

What she learned about leadership when she began making her way up in Google:

“My leadership development happened at Google. I started as an individual contributor, and I left as a leader of hundreds of people—at one point I managed over a thousand people in India. My progression into leadership was about figuring out who I was as a person and how I connect that with the values of the company at Google, and also be inspirational of the people who were to follow me. It brought me to a place of authenticity as a leader: being comfortable in my own skin; being comfortable bringing my whole self to work every day; and being willing to adapt to the needs of a team. Particularly because you are taught one form of leadership, but the reality is I’ve learned how to adapt my leadership so I can meet people at the point of their need. If I have a large team and they need direction, I can give them direction. If I have a small team and they need me to roll up my sleeves and get in there, I can get in there. A leader has to be willing to do all of that and adapt.”

Why she won’t stop talking about diversity in the industry:

“I feel the personal responsibility to talk about diversity because I am different. To accept me as the CEO of TaskRabbit is to accept me as an African American woman who isn’t like most women who are CEOs of tech companies. The more that I talk about it, I think and hope the more comfortable people become that we are all different. We all bring something unique and interesting to the table, and it’s worth our time to invest in understanding those differences, and going beyond them to see what do we have in common and how we can build something together. I hope that my platform when talking about diversity creates a dialogue and creates a conversation around differences that make them more common than they are today.”

Why the concept of *balance* doesn’t apply to her:

“I never feel like I’m balancing because, to me, the concept of balance is walking on a tightrope that is one hundred feet up in the air and I’m about to fall every single second. I cannot live my life in balance, because then I would live in fear since there is no safety net down there. What I try to do is think about cycles and priorities—cycles of what I am investing in right now, my family and my career. What is the number one priority? And it shifts on any given day or week. As long as I am talking to my husband about what the priorities are, we are on the same page. As long as I am communicating internally at TaskRabbit about what the priorities are, we are on the same page. Then I try to set boundaries and prioritize. My husband and I have date night once a week. We try to have family time certain times of the weekend with our kids. I time-bind those things, and I protect them with everything so that nothing can interfere with it. Maybe people call that balance, but for me it is just about cycles and priorities.”

What she’s most proud of:

“I am proud of this company. I am proud that we’ve built a service that people love to use. In the same week I’ve had two different conversations about TaskRabbit. One was with a woman whose husband passed away and she didn’t know how to do things. TaskRabbit was the way that she got things done because she wasn’t handy. In the same week I had a breakfast with the president of the United Nations, General Assembly, and his wife, who said she loved TaskRabbit because her daughter was moving and she found it to put together her Ikea furniture. I am really proud we built this service that can touch people’s lives no matter who you are, where you come from, or what your socioeconomic background or ethnicity is. We can make a difference and that makes me happy.”