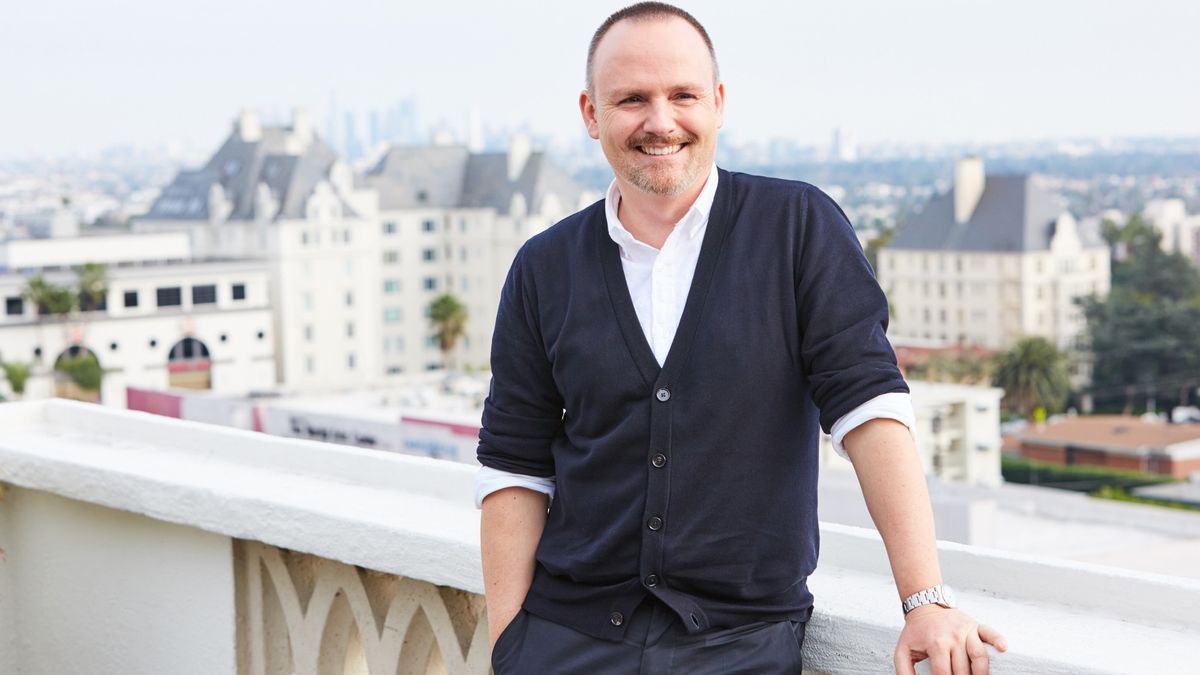 He’s behind some of the most imaginative and iconic beauty looks in fashion history.

While the combination of humble, kind, funny, and game-changing-level talented isn’t as rare in the fashion industry as you might think (more often than not, people are really nice!), it’s always amazing when one of your idols—someone so major you can only imagine them as an ice-cold diva—turns out to be just that combo. Such was the case with Creative and Image Director of Dior Makeup Peter Philips.

The Belgian makeup artist is responsible for some of the most iconic looks in fashion history (this one totally changed his career), and before landing at Dior, he previously helmed CHANEL’s beauty division. He’s famed for being hyper-creative, using color and materials in mind-blowingly different ways, and also for being super duper nice. In other words, he’s the dream.

When we caught up with him, he was in L.A. launching Dior’s new line of Addict Lacquer Sticks, and was, in his own words, “having a great time!” You see, he approaches his job with the kind of giddy enthusiasm you usually expect from someone in their first or second year in the biz, not from a man who has literally shaped the look and feel of modern beauty.

In our fifteen minutes chatting with him, we talked all about the power of makeup and hair, the look that branded him Mr. Mickey Mouse, and what he loves most about his job.

How he got started in beauty:

That first magic moment and what Margiela had to do with it:

“Actually, I remember being totally blown away—we were helping out at the Martin Margiela show as students, we were dressers. The models all came in in their own natural style. Some girls were really almost bland, normal-looking girls. And then they all ended up in the lineup looking like Martin Margiela girls. It was amazing to see how hair and makeup could really transform. That small transformation can really create or underline the vision of the designer. It was really intriguing. Especially in those days, Martin Margiela—I am talking about the early ’90s. What Martin Margiela did totally changed fashion. It was great to see how hair and makeup could help and enhance that vision that he had.”

“What Martin Margiela did totally changed fashion. It was great to see how hair and makeup could help and enhance that vision that he had.”

“It was the mid ’90s. I had been doing makeup only for a few years and met some stylists who I graduated from Antwerp Academy with, and we found a photographer who had also just graduated. We kind of hooked up and started shooting together. I had just starting doing makeup, and we shot one a weekend. We called it ‘free work.’ Because we came from the Antwerp Academy, we were kind of connected to all the young designers in Antwerp and had easy access to all of their collections. One of those young designers was Raf Simons.

“After the men’s shows, we thought, ‘Okay, let’s shoot the clothes before they go out to the press.’ We had access to use them on a Sunday. We did a little shoot amongst ourselves. The stylist, Olivier [Rizzo], had this genius idea to combine the Raf Simons clothes with vintage clothing. One of the sweatshirts Olivier used was a Mickey Mouse one, and that inspired me to do the look. It became a very gothic and very dark story, and I wanted to give it a little twist, make it a little tongue-in-cheek, add some weirdness by doing the Mickey Mouse on the boy’s face. Keep in mind, this was the mid ’90s when makeup on men was not done so much. It gave it a bizarre twist!

“I think the pictures were sent to V magazine, which didn’t exist yet. Steven Gan was going to start his magazine, and they used the picture for issue zero of V magazine. Afterwards, it was used for a few other publications, and it ended up on the cover of the book The Fourth Sex.”

And why he’ll never do another Mickey Mouse:

“It kind of haunted me for a long time because the image became so iconic that I became known as Mr. Mickey Mouse. A lot of photographers started asking me to do a Mickey Mouse afterwards, but I always refused. I always said, ‘I did it once and it was a great one, it was perfect for that shoot.’ I did one more many years afterwards. It was a mask that I made because I love Mickey Mouse. It was shot by Irving Penn for American Vogue. So I did two Mickey Mouses and I am very proud of them!”

What’s most inspiring about working with Dior:

“What I love about Dior is in the roots of the house, is that key slogan, which is ‘the new look.’ Dior gives a platform to creative minds, whether it’s in perfume, fashion, or makeup, to create a new look over and over again. It’s the most visually clear when you look at what John Galliano did for Dior. I mean, he really created his own Dior style and a new look. And if you look at what Raf Simons did for Dior, again, he created his own new look. Now if you look at what Maria Grazia doing, she also has her own style and she creates her own new look, too.

“In makeup you do the same thing. We just did a book called The Art Of Color, and it’s a celebration of Dior Makeup. There have been three creative directors of Dior beauty, Serge Lutens, Tyen, and myself. Each one of us has our own style and new look. I think that’s the great thing about this house. If you respect the DNA that Christian Dior himself established in the first ten years of the house and you play with it, you can create your own new look over and over again and still be Dior!”

“If you respect the DNA that Christian Dior himself established in the first ten years of the house and you play with it, you can create your own new look over and over again and still be Dior!”

What he’d do if he lost his kit:

“Actually, I did once! Many years ago I was shooting a book when I was based in Antwerp and drove to Amsterdam. I arrived the night before, and I left my makeup suitcase in my car in the trunk, and the next morning I got up and went to go to my car to drive to the location, and someone had broken into my car and everything was gone. At first I panicked! I called a friend of mine who is a makeup artist, and he gave me spare brushes, which are key. I knew the model, of course, I knew what foundation and what shade I had to buy. I got some basics like mascara, kohl liner, and base color, a few lipstick shades, some eye shadow, and I managed.

“[I was] pissed off! Because it’s a fortune. And I kept missing things. There are always things in a makeup artist’s kit that you don’t use every day and then suddenly you realize after three weeks that the little thing I bought on a trip somewhere is also gone. I know I can’t find it again! Some favorite eye shadow that you can’t find anymore. I was really pissed off for a long time! Every time when I missed something again, I got pissed off again! At the same time, it was an opportunity to discover new products. A lot of my colleagues were great—they sent products and brands sent me products, I was able to reconstruct a whole new kit with new novelties. You get into habits as a makeup artist, so I was forced to work with new stuff, but it was was an eye-opener for me. Also the solidarity amongst my colleagues was great, afterwards I was able to pay them back, I’m not the only one who got ripped off or whose products got stolen. I’ve been able to help out other colleagues of mine in the years afterwards a few times when their kit got lost or stolen.”

What he loves most about the new Addict Lacquer Sticks:

“The great thing is people’s reactions when they apply it. I was blown away by the formula, the fact that it’s so lightweight and easy to apply. It’s between a lip gloss and a lipstick with high shine and high pigmented payoff. But it goes on smoother than a lip balm and feels very lightweight. I tested all the shades, so I am familiar with it. But now that I’ve started to work with them, the reaction of people is really great, too. Not one negative comment! It’s not too sticky, like a gloss, or too oily or too creamy. Everyone always says, ‘Oh wow, this feels great! I feel like I have nothing on my lips!’ And that was the goal. So it’s great to see that now that we are actually coming out with the product that people are reacting the way we wanted them to.”

What he loves most about his job:

“It’s the whole package. Being able to be involved in the creative process of products, starting from scratch and following up until the end where it ends up in a woman’s handbag. Shooting fashion and beauty campaigns, shooting editorials. Being able to work on the shows—it’s such a huge variety of ways to play with makeup. I travel a lot, I meet lots of great people. I am in Los Angeles for four days. I’m having a great time! I am flying to New York afterwards to do some shoots, and then I am back to Paris. I mean, I am very lucky and fortunate and meet the most amazing people. I keep meeting young people! Which is great. I am very fortunate to work with young stylists and young models. It keeps you alert and it keeps you young. It’s a great feeling.”