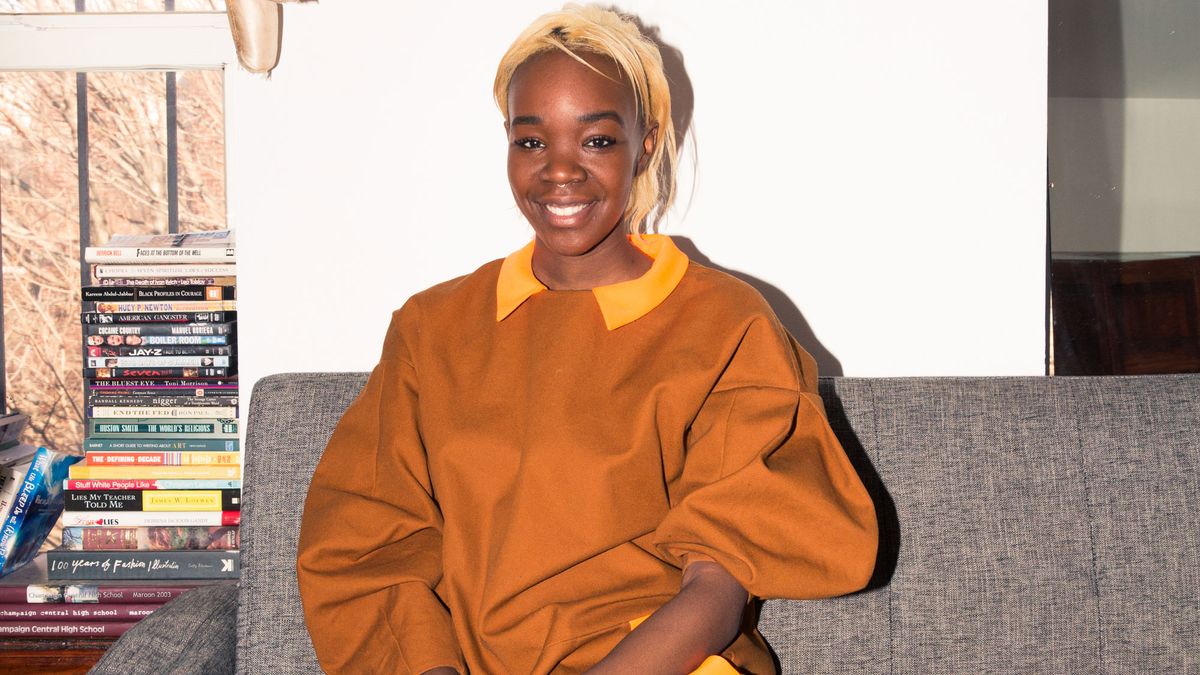 Why This Designer Refuses to Show at Fashion Week

Recho Omondi has figured out the answer to the industry’s frenetic pace.

Visiting Recho Omondi at her studio is similar to visiting any designer at his or her studio—save for a few key differences that, in the end, make it completely unlike visiting another design studio. For one thing, it’s in Brooklyn—far away from the Garment District—in a space where Omondi also lives. And for another, despite the fact that, when we go by, it’s only two weeks before the beginning of New York Fashion Week, it’s shockingly chaos-free—it’s downright zen. And that’s because this particular timing, by which the rest of the industry (yours truly included) essentially sets its collective clock, is completely irrelevant for Omondi and the production and presentation of her eponymous label.

While a slew of designers have announced that they’re not showing in New York and presenting in L.A. instead (Rebecca Minkoff, Tommy Hilfiger) or off-schedule entirely (Proenza Schouler, Rodarte), Omondi has been doing her own thing for a long time.

That’s not to say she never participated, though. When she first launched her line in 2013, Omondi put together a show—it was the first and last time. “It just didn’t feel good,” she says. “It felt dead and archaic. It’s a lot of money down and there is no guarantee, especially as a new brand. I felt like I didn’t have anything to prove. It was like creating Thanksgiving dinner every night and throwing away 90 percent of it. People might like the potatoes and that’s all they eat and that might be the number-one best seller, so what do you do with everything else?”

The waste is one thing (money, pieces, and looks that are never ordered by retailers), but it was the response to the other ways in which Omondi was presenting her clothes to her customer that clued her in to the fact that the show format didn’t work for her anymore. “The idea of a runway show was old to me, because even when we did ours, we had so many friends who wanted to come, but Fashion Week is so congested and they had other obligations. But when we put the lookbook on Tumblr, it was getting 4,000, 5,000, 10,000 notes overnight,” she explains. “I was like, ‘Why are we doing a show?’ Most of my friends couldn’t come. Most of the editors couldn’t come. Our audience is online. WWD and other publications were screen-shotting our Instagram and pulling samples that way. It just showed me that the show doesn’t matter.”

Now Omondi has slowed down completely. She no longer follows the seasonal calendar—she presented Season 03 to a small group of editor friends over dinner last night and the collection will be available to shop on her website on March 22 instead of in six months. “I never feel rushed to keep making things or to prove anything. I’ve been working in the industry for so long and even knowing so many young designers like myself, the number-one mistake that everyone was making was feeling like they had to keep up with the Joneses, presenting something every four to six months. That was insane to me!”

The genius part is that her customers still pay close attention even though she’s not constantly making new things. But Omondi thinks that her strategy better reflects what her fans actually want—and she’s obviously right. “We put out one collection a year over the past three years,” she says. “I don’t believe in the concept of a collection anymore. I think real girls with real style know what to wear; they just need pieces. They don’t need you to spoon-feed them an entire concept.”

But people are still eating up everything she’s doing—especially her recent cult hit, the customized pullover sweatshirts, which she made for fashion editor friends, subsequently blowing up on Instagram. Now the concept has become a major revenue stream, and Omondi gets to keep making exactly what she wants: imaginative, very cool clothes on her own schedule. Sounds like a solution for the industry’s problem with designer fatigue if we’ve ever heard one.