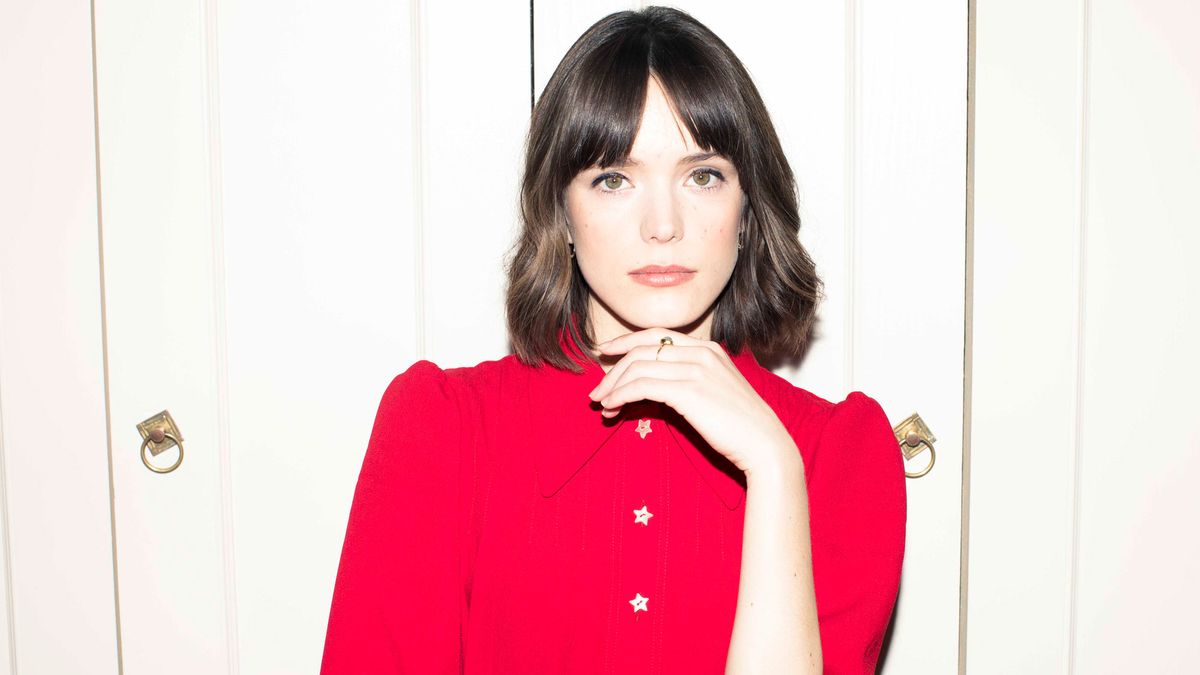 She’s the face of Miu Miu’s new fragrance AND has five films coming out this year. NBD.

The day we meet actress Stacy Martin, it’s 23 degrees in New York, and she’s sitting on a couch in the Bowery Hotel overlooking the city. She quickly takes off her jacket, joking, “Oh this? I don’t need this!” before quickly grabbing it back and throwing it over her shoulders. It’s official, we’ve all forgotten what spring feels like. Fortunately, we spent the afternoon (inside) celebrating Miu Miu’s L’Eau Bleue, the newest fragrance that captures the beautiful feeling of spring in a bottle. Essentially it is everything we need and want right now.

Then again, when is Miu Miu not something we need and want? (The answer is never.) Dressed in the perfect red Miu Miu dress, Stacy Martin knows exactly what we mean, having starred in two of their fashion campaigns before becoming the face of their fragrance (alongside a kitten named Truman). Before that, she was the star of Lars von Trier’s Nymphomaniac. And this year she has five (!!!) movies lined up and next year she’ll be acting in Kirsten Dunst’s directorial debut, an adaptation of The Bell Jar.

Born in Paris but raised partially in London, she managed to look effortlessly cool jumping around the hotel room for photos: “I mean, I asked for a trampoline but it obviously hasn’t arrived.” After trying on L’Eau Bleue ourselves (we’re never taking it off), we sat down to talk with Stacy about learning the piano for an upcoming film with original music by SIA, everything Miu Miu, and the French beauty product she can’t live without.

On working with Miu Miu:

“I started working with Miu Miu for their fashion campaigns. When they asked me to do the fragrance it...felt like a really special collaboration. It was a very similar setup but this time we didn’t have to shoot clothes so there was more focused on the imagery and it was much more precise. It was very precise. It’s a testament to the collaborative relationship we have together in a way, what they see in me and the way we all work together.”

On the spring scent of L’Eau Bleue:

“It’s really fresh, it’s very similar to the original [fragrance, ‘Miu Miu,’] but this one has honeysuckle in it so it’s sweeter. It’s much lighter than the first. They are both still Lily of the Valley, so there’s always a sweetness to it but it’s a bit more spring-y!”

Her favorite movie project to date:

“I just finished a film I really, really enjoyed doing. It was Michel Hazanavicius’s new project, Redoutable. It was about Jean-Luc Godard and his relationship with his second wife and it was sorta biopic but also a comedy. I loved doing that. Michel is very particular in terms of style and working with everyone in the cast. It was a really important moment when you realize you work with people you respect and who you have fun working with. That is what I try to do, so when that actually happens it’s like ‘'Ahhh, so great!’”

On *that* upcoming film with Jude Law, Rooney Mara, and SIA:

“I’m very excited about Redoubtable coming out. I’m doing another film this year called Vox Lux by Brady Corbet and I am really excited about that. It’s about a pop star and that’s kinda all I can say! Jude Law is in it and Rooney Mara is in it, so it’s an amazing cast and SIA is doing all the songs. It’s really amazing. I’m learning the piano at the moment and learning how to sight-read music which is a whole other thing. It’s really hard! People think it’s easy but it’s not!”

How to remain calm before a red carpet:

“I just try to be as comfortable and relaxed and chill as possible because it’s quite intense so the more relaxed I can be before, the more relaxed it is. Sometimes when I want to celebrate I’ll have a Tom Collins before! That’s really, really good. Sometimes I put the news on or music. This morning I put on Caitlin Rose and Kurt Vile. Also jazz! You forget how incredible it is. There are so many different types as well. Jazz itself encompasses so many different styles. It’s really amazing.”

“Jeans or a worn jumper. I love jumpers. I was going to say Converses but in this weather, just no. So, boots! I’ve been wearing my Acne ankle boots because they are really warm.”

Her low-maintenance skin-care and makeup routine:

“In the morning, I keep it really light and simple. I don’t really want to spend five hours in the bathroom so whatever can get me out and active in my day is good. I wash and moisturize, I guess just the normal steps. I don’t do anything fancy! Basically it’s ‘Okay, how do I not look so tired?’ I just use products that I know I like so I don’t have to think about it. I use the Kiehl’s calendula face wash, Créaline, which is a French toner and a moisturizer. In the evening I just wash my face and use Kiehl’s midnight recovery serum because it has lavender and is really nice.

“My makeup is super simple, super natural. I’m just not very good at it. One of the amazing things when you do red carpet is that you have a team to make you feel great because they make you look great!”