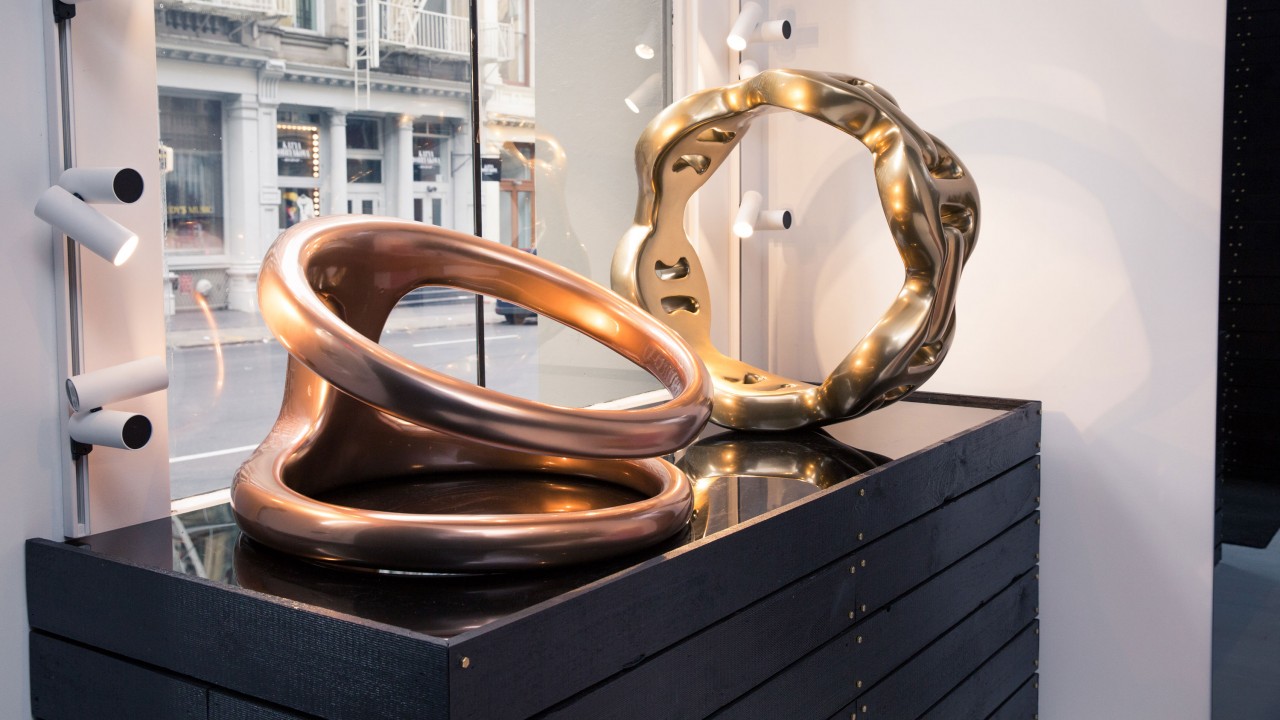 Santa Monica-based Hoorsenbuhs just made a power move in NYC.

Up until meeting Robert Keith and Kether Parker, the creative director and his partner slash brand ambassador, respectively, our mental image of the jewelry line Hoorsenbuhs was somewhat staid and formal. In our mind’s eye, it was an old-school luxury brand that was more classic than anything. Boy were we wrong!

What we found were the two friendliest self-described “L.A. guys” there ever were, who welcomed us to their newly opened Soho shop with a hug and a big, grill-decked grin. The pair gives off a best-buddy vibe that sucks you in and makes you want to buy in to the special brand of relaxed opulence they’re offering. And it would seem we aren’t the only ones who feel this way—fans of the brand include Rihanna, the Olsens, Kanye, and Jay Z. They also share their space with none other than their pal Damien Hirst. While we were shooting, massive works of art were being delivered and brought downstairs.

The space itself is also pretty close to a work of art. Every single piece was designed by Keith (down to the bolts) and reflects elements from the brand’s lexicon. That gigantic chain hanging from the ceiling, through the display case? It reflects their signature chain link. The chairs? Those are slightly reimagined versions of their classic Phantom rings.

To get to the point, there was more than enough to take in, which is why we photographed every. single. detail. of the brand’s space. Click through below to read about how it all started, and just how they came to meet Damien Hirst.

“[Soho] is the best neighborhood. It has the rich history of the galleries, the art. I mean, this is the center of it all. The center of the universe. We also have a connection with this neighborhood because this is where we started. Back in the day, Kether and I were basically just Los Angeles guys, and with some nudging from our friends who worked at The Row who said, ‘You’ve got to come out to [show your line]—just get a room at The Mercer [hotel].’ So we did. And that’s where it started.” —Robert
“The Mercer has been the only place that we've done business as a brand. We don't do the traditional jewelry shows; we don't do couture. Or the jewelry convention. We'd come here once a year, during Fashion Week in September, and we meet people at the Mercer. So the fact that we ended up two blocks away was a really cool moment. We have a good anchor in this area.” —Kether

“When I first started learning the trade, I had made one ring out of clay, and I took it to a caster and I said, ‘Can you make this into a ring?’ She said, 'What is that?' And I said it was clay, and she said, 'Well, it's got to be out of wax,' and I said, 'Oh,' and she said, 'Do you want to learn?' and I said, ‘Yes.’ Then I tortured myself trying to figure it out and in the end I was able to create this one ring. The next day I was standing at a coffee shop and this woman tapped me and said, 'That's a beautiful ring—is it vintage?' and I said, ‘No I made it,’ and she asked me to make her one. I grabbed the paper off a straw, put it around her finger, snapped it off, and that was her ring size. Put her number on it, called her up and said, I made your ring. After that first one, I went home and literally it was like Sylvester Stallone... I heard, when he wrote Rocky, he was able to just [snaps fingers]. It was like a switch turned on in his head and I had that vision, that moment. And still to this day, the core of our existence is rooted in that explosion.” —Robert

“This piece is by Wes Lang. He did the Grateful Dead special edition album covers. He's done all the Kanye West tour merchandise, the Yeezus stuff. I work with Wes. I work with Damien Hirst. I actually connected them so that Wes is going to get his show at his new Newport Street gallery.” —Robert

“Santa Monica has always been our headquarters and private atelier, and it's where we operate out of. For this location, which is now an extension of my aesthetic, I brought in all the elements that I've worked with over the course of the inception of the company. For instance, the wood you're seeing here is on the exterior of my Santa Monica, Venice, location. Some of the tile patterns, some of the woodwork, I've used that in different elements of branding from the very beginning. All the art in here is by people I have deep relationships with.” —Robert

“Every single piece in the store is handmade. I designed the chandelier, and an artisan helped me make that. This whole place started years ago as a simple drawing. But you can already see that it has some of the elements of the jewelry, even the back wall tile stuff and everything.” —Robert

“The vault is 7,000 pounds. It’s all made by hand in a land far, far away. I cast all the bolts. It took a lot of people to make this happen.” —Robert

“This is Steve Olson. He's one of the first world-champion skateboarders. He's also a dear friend of mine and a bandmate. We have a fake band called the Temporaries, because we can never remember one song that we do so we just keep making new ones.” —Robert

“This is Damien [Hirst’s] art space.” —Robert
“They do the art fairs mostly, from here, they set up and do client meetings.” —Kether

“Damien actually knocked on our door at our private atelier. A waiter who surfs with Kether was wearing one of our rings. When [Damien] gave him his credit card, he saw his hand and he said, 'Nice Hoosenbuhs ring.' And the story goes—we weren't there—but the guy said that Damien said, 'Do you know these guys?' and he said, 'Yeah, I surf with Kether.' And Damien said, 'Do you know where I can find him?' and he said, 'Well, yeah, they're in Santa Monica. Go to their place.' And he's like, 'How do I get there?' So he just gave him the address, and we're sitting there and he just showed up. And usually we know exactly who's coming. So it was a funny security moment as well, because he and his friend—they’re tall, in sunglasses, kind of unshaven—were standing in the door and Kether was like kind of like…” —Robert
“Russian gangsters were going to rob us!” —Kether

“So my staff was like, there's these guys at the door, and Kether's got, like, $500,000 to a million dollars in jewelry, showing this client on the table, and I was at lunch. Anyway, it was classic. You know, Rob check the monitor, and one of these guys has got one of the rings on, and he comes in and Keth finally goes over and sees him and he's like, 'What's up man?' and he's like, 'A waiter at The Ivy told me...' and Kether is like, 'I don't know a waiter at The Ivy,' and he's like, 'Man, I got this ring and stuff and I'm from England.' He comes in and the next thing you know, Kether's talking to him and he said, 'So, what's up in England? What do you do?,' and he said, 'Yeah, I'm an artist.' And it [snaps fingers] clicks instantly. And about at that same moment, my other employee told me to look at the security monitor from lunch, and I go, that's Damien Hirst man. Relax, I'll be right there.” —Robert
“And then for a couple hours we just played music and became friends.” —Kether