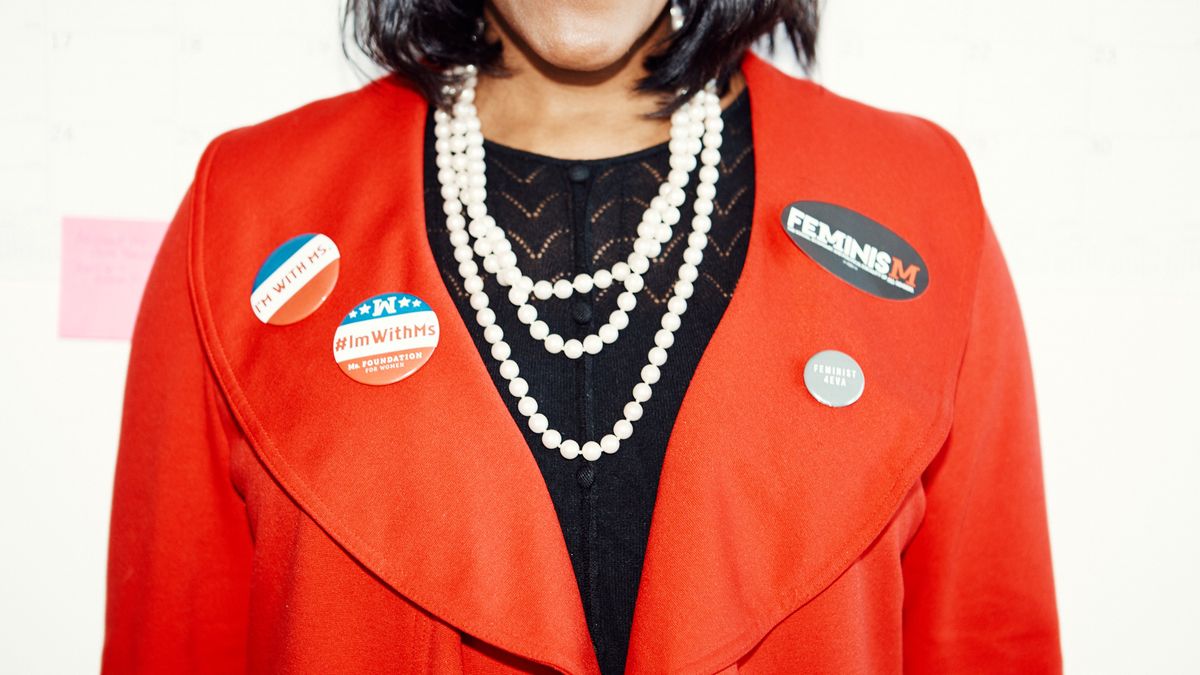 The Most Inspiring Thing You’ll Read All Day

Teresa Younger, president of the Ms. Foundation, on her reaction after the election, and why now is the time to act.

When, a few weeks ago, we got the chance to meet the president of the Ms. Foundation, which was founded in 1973 by legendary activist Gloria Steinem, we had a little bit of a pinch me moment. We meet interesting, inspiring people every single day doing what we do, and some days we can’t believe how lucky we are to do it. This meeting went beyond that feeling.

We can’t speak for everyone, but most of us felt crushed by the results of the election. We were devastated, heartbroken, felt rejected as women, and defeated. It feels like everything we thought we knew about the direction this country was going in, after having eight years of the most caring, hardworking, compassionate and elegant first family, was wrong. So when sitting down with Younger we had that preliminary tickle of tears in our eyes, and when she told us about being in the Javits Center the night of the election, and what the mood was like at the Ms. Foundation the morning after, we were moved beyond words. We were also incredibly motivated. So many of us are just beginning to fully understand how broken American society is, and it’s a really hard truth to face. But we’re in a position to finally come to terms with it, and address it head-on—if we all continue to fight. Today is the Electoral College vote—and unless there’s a major unprecedented upset, Donald Trump will officially be our president, with people like Mike Pence, Steve Bannon, Rex Tillerson, and Jeff Sessions guiding his choices. For lack of a better phrase: shit just got real.

Here’s what Teresa Younger had to say about the night of, the days following the election, and why we have to stay motivated:

“When we got to to the [Javits Center], it was—it was this moment of profound excitement. I would have, in my lifetime, voted for the first black person to run for president of a major party and to have been president, and then I had voted for Hillary Clinton. Here I was in this moment to see her, hopefully, become elected. But then it was like somebody had put a pin in a balloon and it just deflated as the night went along. It was pretty sad.

“[The next day] I think it was real heartbreak. The next day I was fine, I left the Javits Center, I got on the train, I got home, I was fine. My husband was like, ‘I’m so sorry for your loss,’ and he was lost too, and I was like, ‘I just can’t think about it. I don’t want to know any more.’ The next morning on the train, a white man sat next to me, which is not unusual, and he looked at me—and I don't think I had any Hillary stuff on, but he looked at me and said, ‘I’m so sorry.’ And I lost it, and started crying profusely like a crazy person on the train.

“I think we were just so awestruck, so saddened. People came into the office and I said, ‘Let’s have lunch brought in’ and we put the TV on and basically said, ‘We are serving lunch and if people want to say something at lunchtime they can. If people want to just sit, they can.’ People came in and watched her speech or watched from their offices. You could hear the crying. Then we all came together for lunch and I said, ‘Today we get to be sad. Tomorrow we get to be sad. But then we have to take action.’ This is a marathon that we are running. It’s going to take at least 26 years for us to get to the point where women and communities of color are the dominant population, and we can really work to make sure that by the time we get to that point, we are prepared to own the leadership that will come in that timeline.

“I think we kind of kicked over, I know I have in the past week, where I’m like, ‘Okay, so what does the strategy look like?’ Every time we hear about president elect Trump’s nominees for his administration, we get a little bit more freaked out and a little bit more worried, but I think it’s not just about his term and who he is putting in place. But it’s about what does this longer picture look like? What is going to happen to the privatization of America? What’s going to happen around childcare, around prison reform, around healthcare? Which are our three key areas: health, safety, and economic justice.

“I said randomly, ‘I’m going to sleep on November 9th because Hillary will have won and we can sleep for a couple days, and then we can get to work.’ Because even in her presidency it wasn’t going to be perfect, we’d still need to hold her accountable and push through really good pieces [of legislation], so I think my greatest sadness is that I haven’t slept yet. And we all wake up in a fit of fear a little bit. But I am reminded of our colleagues and our friends who are in Standing Rock and knowing the work that they are doing and their commitment to preserving Mother Earth and the water for all of us. And so I’m like, ‘We don’t get to be tired and we don’t get to be upset, we have to continue to fight!’”