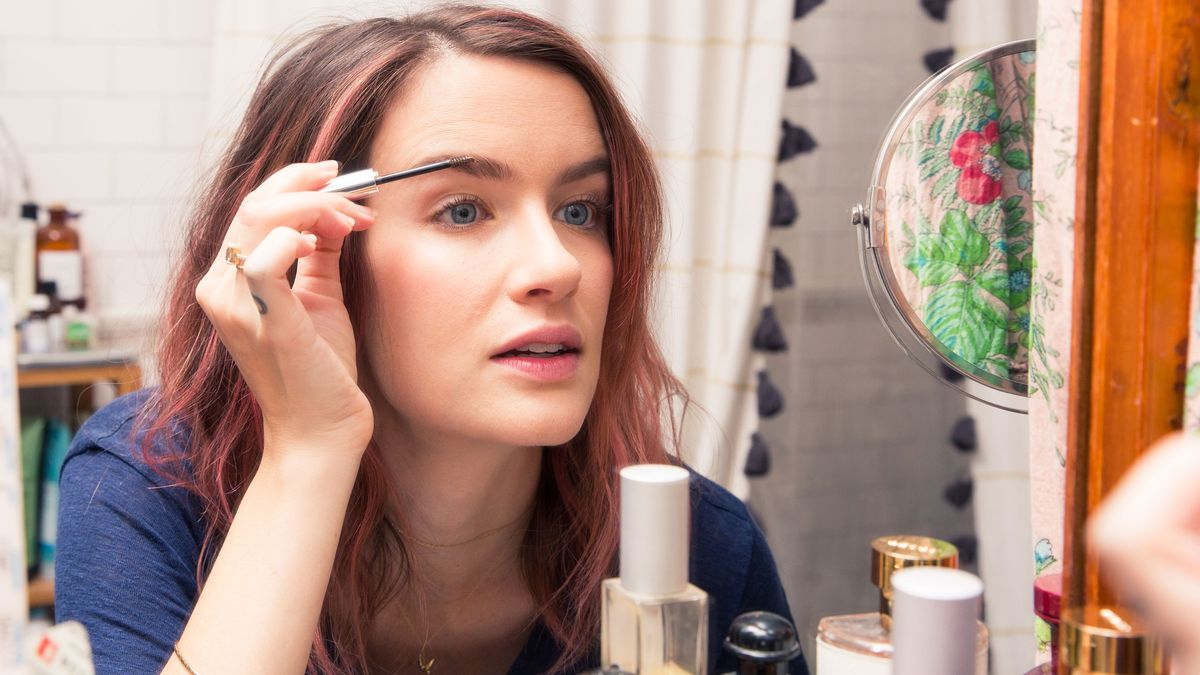 Everything it takes to get skin like a hit TV star.

Mornings are hard. If you’re a morning person, we salute you, but even if you wake up before your alarm and have all the time in the world, there’s always something to trip you up and make getting out the door a struggle. Thankfully, we don’t need to look perfect at work—the only people who see us with any regularity are our colleagues (sorry!)—but when you’re an actress, especially on a day of press when cameras will almost certainly be right up in there, it comes with the job description that you need to look top notch. So when we heard that Anna Wood, star of USA’s Falling Water (she just announced she’s expecting with husband Dane DeHaan!), is a beauty junkie, we decided to suss out exactly what a well-honed morning beauty routine actually looks like.

We said mornings are hard… Well, the morning we showed up at Wood’s Williamsburg apartment was one when she was prepping for a day of TV appearances, which we’d rate at a 9/10 on the hard scale. As it turned out, it was also the morning after the election—probably a 50/10 on the hard scale (maybe the hardest morning ever?). But, see, this is how we know that Wood is truly a champion of mornings and of beauty (our rough skin and red-rimmed eyes should be included here for scale). Herein, her beauty routine, from skin care to hair and makeup. It’s simple, easy, and election-proof.

“I start with La Mer cleansing foam. I’ve used it for years—it’s the perfect combination of smoothing and actually cleaning and not leaving shit on your face. It’s the most perfect cleanser I’ve ever had.”

“[Then I use] Fresh Umbrian Clay Purifying Toner. This is actually my first bottle, but I really like it. You have to shake it up in the morning because it’s got clay at the bottom. It’s funky. My face started acting up a few months ago and this has the qualities of a clay mask without the time-consuming-ness of a clay mask. It sucks all the extra dirt out and is a double whammy because it’s a clay mask and toner. Then, I’ll spritz with either Glossier Soothing Face Mist or Caudalie Beauty Elixir. Honestly, people just told me to do this so I do, but it feels and smells really good—I don’t know if it’s placebo but I don’t really care. You see it in literally every cool girl’s cabinet and I just want to be cool [laughs]. But it smells good and it’s a nice way to perk up in the middle of the day.”

“Then I use one of these three Glossier serums—Super Bounce, Super Glow, or Super Pure. Today I used Super Bounce because I stayed up all night and I needed to wipe the sleepies away a bit. But I use any combination of the three depending on how good or bad I’ve been to my skin.”

“If I’m really dry in the dead of winter, I’ll do a classic La Mer Moisturizing Cream. I just started doing anti-aging stuff because I turn 30 in December and I felt the pressure. Amore Pacific Future Response Age Defense Creme is also really nice; it smells like green tea. It’s moisturizing, but it’s not heavy. And then Clarins Super Restorative Total Eye Concentrate is the only eye cream I feel actually does the job of making you look less tired. I put it on every night, but I don’t do it every morning because I feel like it could conflict with makeup. But I was puffy this morning—I had a rough night and morning because of the election—so I just needed all the help I could get.”

“My hair is simple. I’ll just do a dry shampoo, either Serge Normant or Klorane. I was in Paris for the first couple months of the year and I did a huge french pharmacy haul. I dragged my husband along and it was traumatic, but I got, like, 35 products—it was bad. If I’m feeling extra fabulous or I have a meeting I’ll do the Serge Normant Dream Big Instant Volumizing Spray. Or this David Mallett Australian Salt Spray—it’s really nice. It’s not as crunchy as most salt sprays.”

“I love makeup, so there are days when I will bring out my whole kit, but on a normal day I’ll just do some Clé de Peau Concealer—it’s the best. [I put that on] under my eyes. My face is really calm now, but for a while it was acting up so I have a little bit of old acne scarring to deal with. It needs a little camouflaging. If I’m feeling sassy or puffy, I’ll do a little contour—not every day, but I do love a highlight. I can’t help it. This is a Diorskin Nude Air Luminizer Powder, and I’ll just pop it at the top of my cheekbones and eyebrow. A makeup artist told me to put it in between the eyebrows, weirdly, too. I’ve been doing highlighter since high school. I don’t want to say I’m prophetic, but I love it—I love a shimmer. And then I add a little blush because I’m super pasty. This is really old [blush], I got it for my wedding—Dior Rosy Glow.”

“Glossier Boy Brow is imperative every day. I put a lot on. I use brown, but I want to try black. I’m the kind of girl that would straight-up Sharpie on my eyebrows. I love eyebrows. The two things that are imperative are eyebrows and blush.”

“I wear perfume every day. My top right now is the new Prada La Femme fragrance. My husband happens to be the face of Prada, but this is the gal version. And then the D.S. & Durga Coriander scent is my every day. I like spicy stuff that's like on the side of feminine, but has a little bit of masculine in it.”